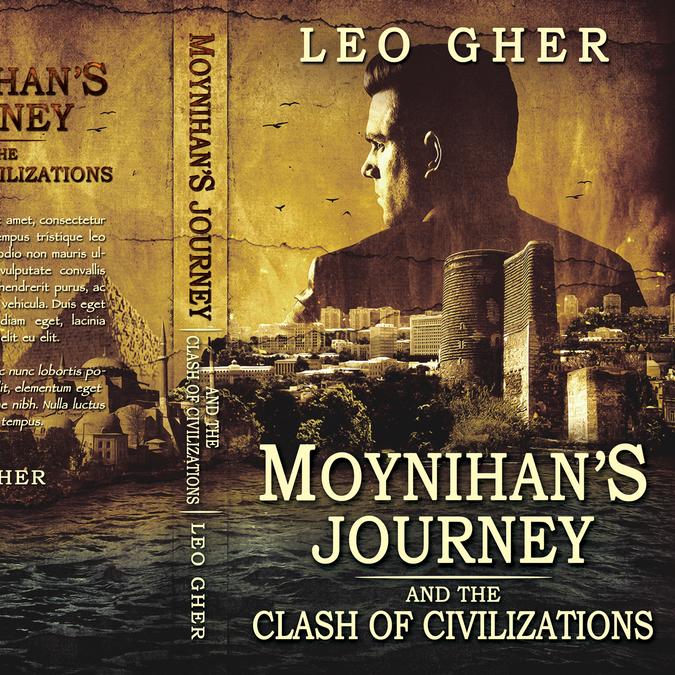 Moynihan's Journey and the Clash of Civilizations 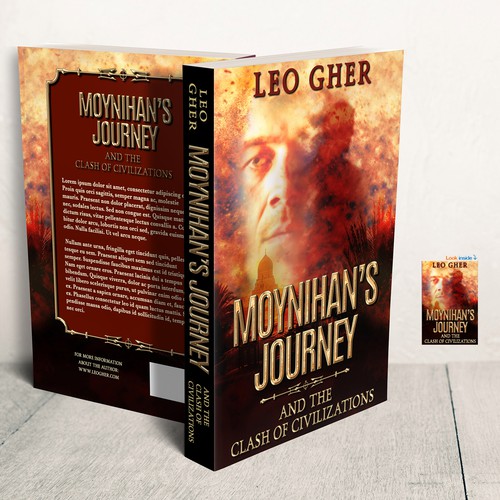 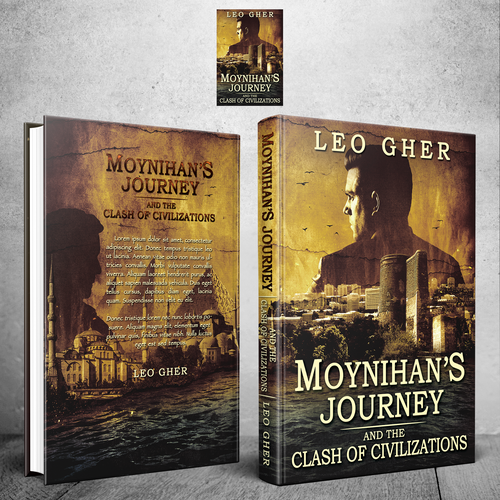 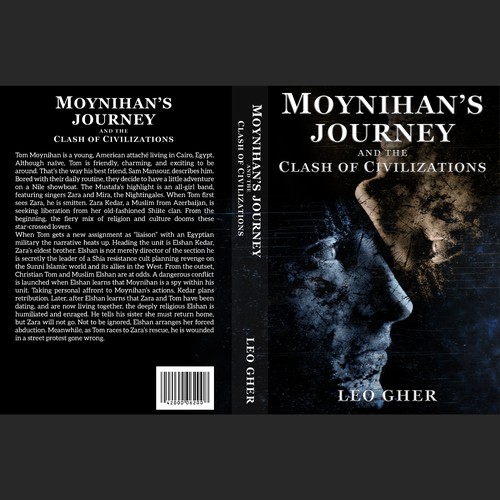 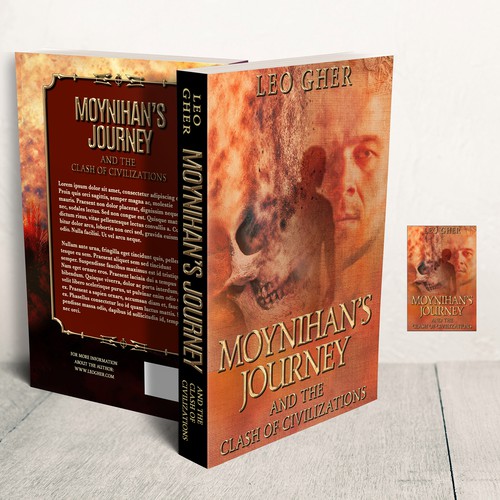 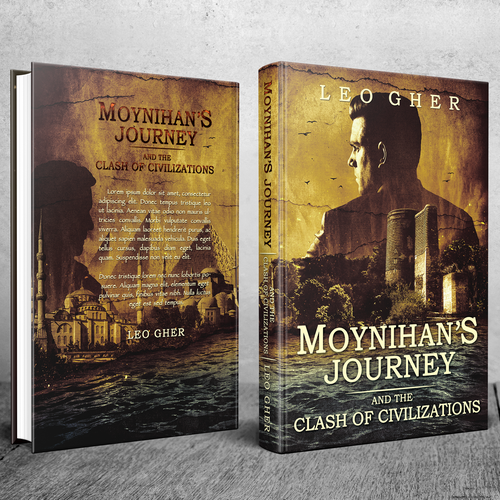 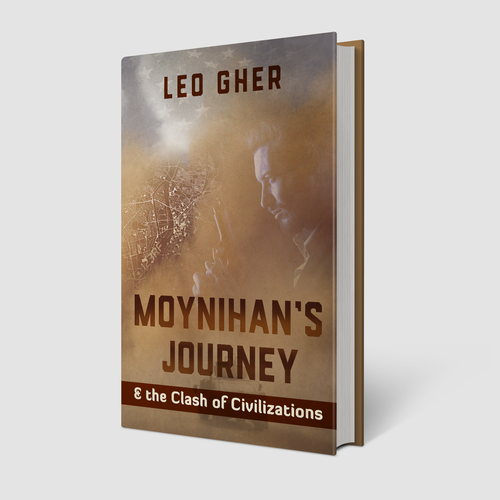 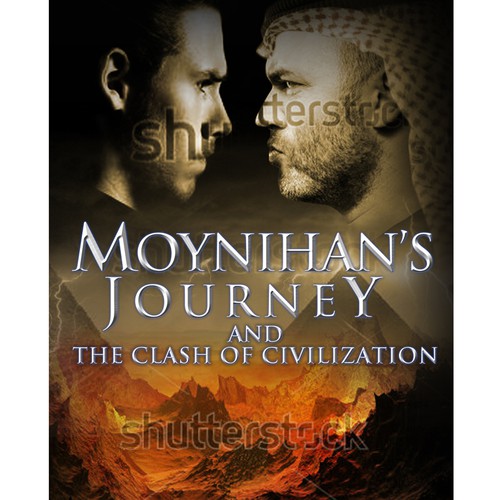 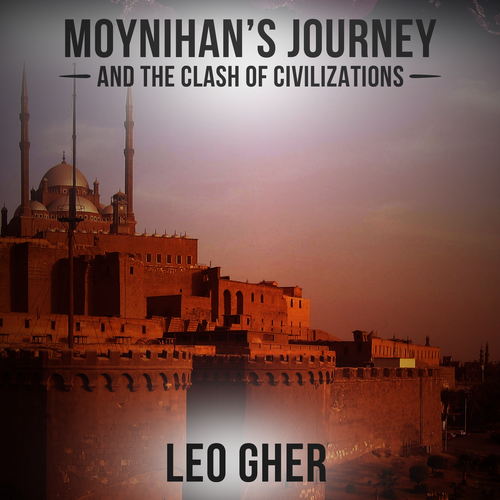 I am an independent author ready to publish my novel. I am look for a book cover design for both ebook and print.

Author Name as it should appear on the cover: Leo Gher

Genre: Modern Drama/Literary Fiction
Target reader: This novel is a work of fiction based on actual events. It was written with a sophisticated reader in mind, and involves social commentary, cultural criticism, and attention to the human condition. Still, the narrative has many elements of a Thriller.

THEME/CONFLICT: the big idea of this novel is the clash of civilizations (The West vs. Islamic civilization). This conflict is, of course, played out between the hero (Tom Moynihan) and the villain (Elshan Kedar). An underlining TWIST centers on the conflict is between Sunni and Shia Islam, and the Shia plan for revenge for a 1000 years of repression by the Sunni world.

Synopsis: Tom Moynihan is a young, American attaché living in Cairo, Egypt. Although naïve, Tom is friendly, charming, and exciting to be around. That’s the way his best friend, Sam Mansour, describes him. Bored with their daily routine, they decide to have a little adventure on a Nile showboat. The Mustafa’s highlight is an all-girl band, featuring singers Zara and Mira, the Nightingales. When Tom first sees Zara, he is smitten. Zara Kedar, a Muslim from Azerbaijan, is seeking liberation from her old-fashioned Shiite clan. From the beginning, the fiery mix of religion and culture dooms these star-crossed lovers.
When Tom gets a new assignment as “liaison” with an Egyptian military the narrative heats up. Heading the unit is Elshan Kedar, Zara’s eldest brother. Elshan is not merely director of the section he is secretly the leader of a Shia resistance cult planning revenge on the Sunni Islamic world and its allies in the West. From the outset, Christian Tom and Muslim Elshan are at odds. A dangerous conflict is launched when Elshan learns that Moynihan is a spy within his unit. Taking personal affront to Moynihan’s actions, Kedar plans retribution. Later, after Elshan learns that Zara and Tom have been dating, and are now living together, the deeply religious Elshan is humiliated and enraged. He tells his sister she must return home, but Zara will not go. Not to be ignored, Elshan arranges her forced abduction. Meanwhile, as Tom races to Zara’s rescue, he is wounded in a street protest gone wrong. Tom has failed to save Zara and is medevacked to the U.S. for surgery. When Elshan learns Zara is pregnant it’s too much. His sister has broken a prearranged marriage contract and dishonored the family. Elshan orders an “honor killing,” but not until the baby is born. Part one ends as Zara narrates her own, horrific dying experience.
After a year, Moynihan emerges from a coma and learns the bad news: Zara and the baby are dead. After months of recuperation, Tom meets and marries Katie Kowalski. They have a son, Jake. One night, Tom receives a mysterious memo from Mira – Zara and the baby are both alive. It is Elshan’s trap, of course. Upon arrival in Azerbaijan, Tom learns that Elshan has kidnapped Sam, and sets out to rescue his friend. As they escape, Tom sees a little boy with Elshan. It is Tom’s son, Conor. There is nothing Tom can do for the moment. As time passes Moynihan joins an anti-terrorism unit headed by his old boss, JK Burke. When Burke is assassinated – setting off a religious war between Christians and Muslims – Moynihan is made the head. Tom and colleagues begin the hunt to capture Elshan. In the end, Moynihan arrests Kedar when they set a trap in Baku. Elshan is convicted and sentenced to 25 years in prison.
Years later, Conor (Tom and Zara’s son) demands to know the truth about his mother’s death. Mira reveals that Elshan ordered the killing. Conor is enraged and vows revenge. The stars become aligned for the conclusion of Moynihan’s Journey when Elshan is released from prison, and Tom returns to Azerbaijan for Conor’s high school graduation and 19th birthday. When Elshan learns that Moynihan will visit he plans the murder of his old nemesis. Elshan's men attack and Tom is wounded. After seeing his father injured, Conor decides to confront and kill his Uncle. Returning to the hospital, Conor learns that his father is critically ill. Within a few days, Tom dies of Sepsis.
Tom’s other son, Jake (with Katie), wants to murder someone, any Muslim will do. After the funeral, traveling from the cottage, Jake asks the driver to stop – he wants one last look. Then Jake makes a promise, “One day I will return to this place… to confront my brother and rescue my father’s bones from these heathens.”

Key Elements (Please describe some key elements of the book, that you would consider appearing on the cover, e.g., , and/or):

Important locales:
Tom lives in Cairo… along the Nile River (beautiful view) in the Shepheard Hotel… he can see the military compound of Gazira Island.

Jahannam Retage (“Hell’s Gate” on Fire Mountain) is where lots of action takes place, including the killing of the villain. His body is thrown into the firepit.

City of the Dead – an actual place in Cairo… tombs and housing together. The place where villian plans the murder of hero.

Khamaseen – The Neverending Storm is a wind storm that occurs in Cairo and on the Nile… winds top 85 miles/hour (of course, the symbol of the struggles of civilizations).

Book on Spiritual Healing Requires Original Cover Art
239 £GB
People how are interested in the natural world, ancestry, shamanism, and shadow work. Equal gender split, 35-65yrs,
29
entries
11
designer graphistes
Book cover for non-fiction
US$ 199
Small business owners looking to grow their business by using social media marketing.
161
entries
28
designers
Shallow Water Romance
$ 749
Usually, women between the ages of 18 and 60.
295
entries
78
Designer
Design book cover in Russian
$299
Most of the readers are well educated women 30-50 age old, with interest in self-help, psychology, spirituality and New
34
entries
5
diseñadores
Need a retro design for my book about the pipelines in Alberta.
CA$529
The people who are going to read and enjoy this are people interest in turn story fiction. People interested about what
51
entries
11
デザイナー数
The Culprit
CAD 529
35 plus cat lovers and fans of true story satirical writing.
168
entries
50
diseñadores

Comienza ahora
A man who is a business man by day and gangster at night. Show the man's duality.
399 USD
Ages 18 to 65, both black and white, male and female from the inner city to suburbia. This book has violence, romance an
21
entries
4
designer
Design an eBook cover for IT geeks and cloud computing experts
USD 329
IT system administrators, software developers, DevOps professionals, mostly male, 25-40 mainly from the US and Europe.
88
entries
19
diseñadores
Book cover needed for ultimate fan guide to the Fast and Furious movie franchise.
US$ 749
Fans of the "Fast and Furious" movie franchise. These movies are consumed by a massive global audience, ranging in age a
110
entries
37
diseñadores
Design the cover of a book about the healing power of God
USD 399
Christians who are tired of being sick and want to receive the healing power of God.
43
entries
19
diseñadores
Amazon Ebook Cover for german ebook (Topic: Motivation for studying)
EUR 299
Students
96
entries
16
diseñadores
Powerful and visual health supplement Amazon KDP book cover
$ 399
Both genders starting in early 20's. People who already have compromised immune systems, worried about corona virus, or
194
entries
51
Designer
Más información sobre diseño de portada de libro o revista
Vea como funciona