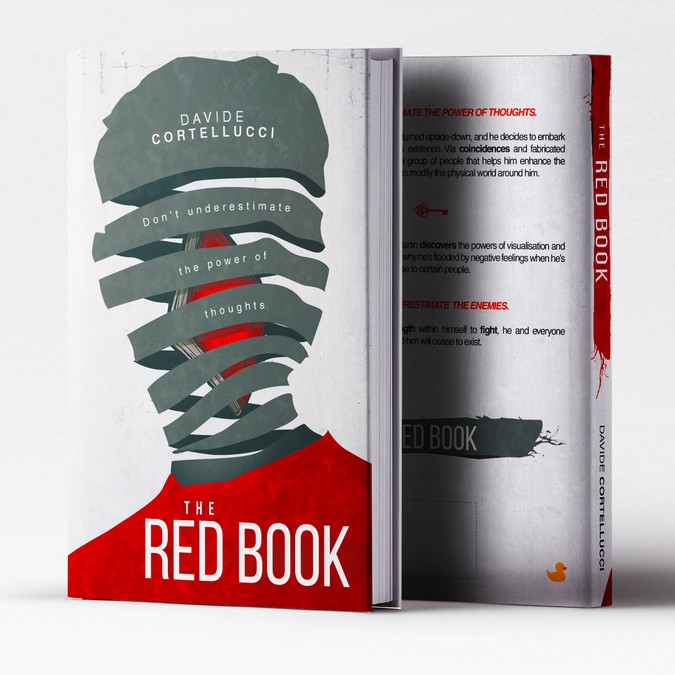 A new novel, THE RED BOOK, needs a great cover that would become an icon through time. 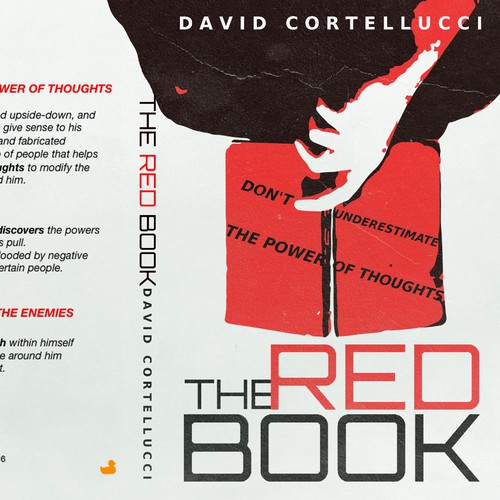 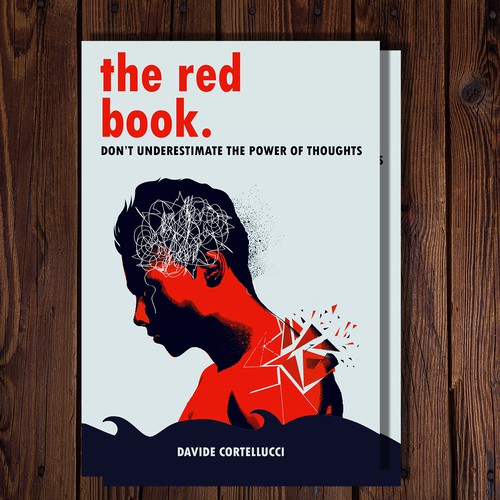 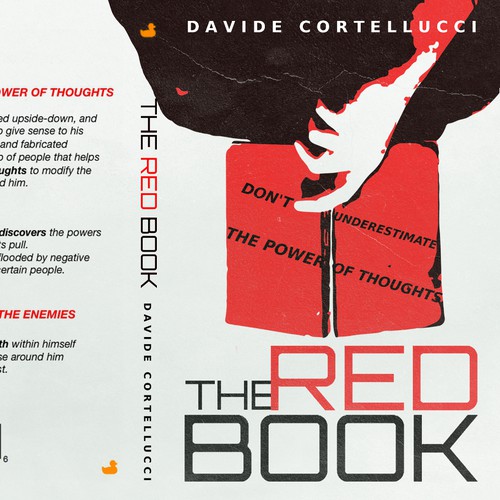 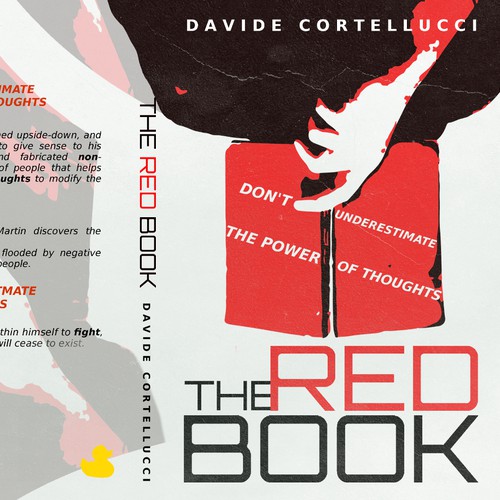 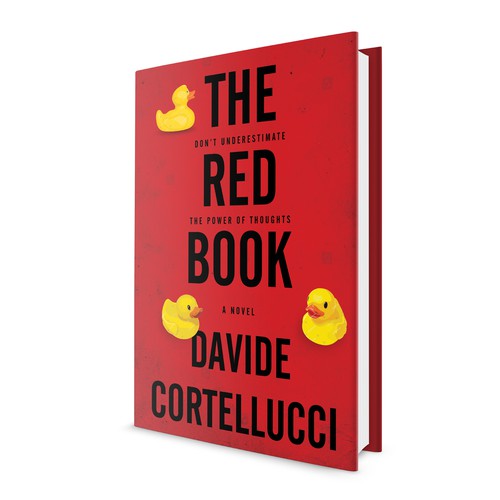 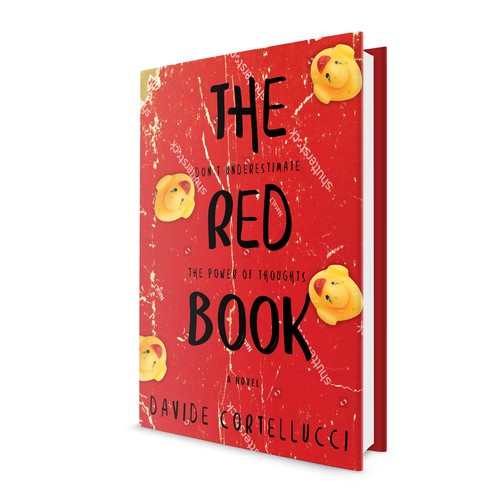 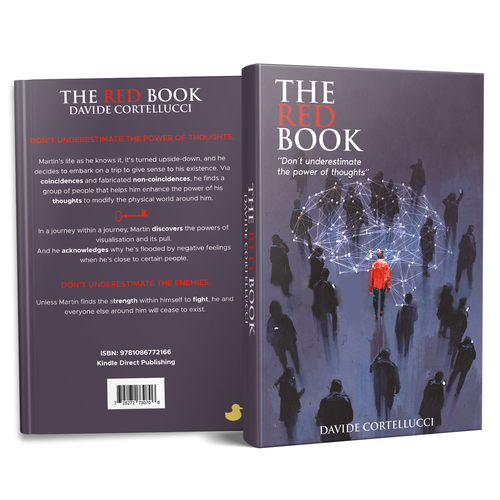 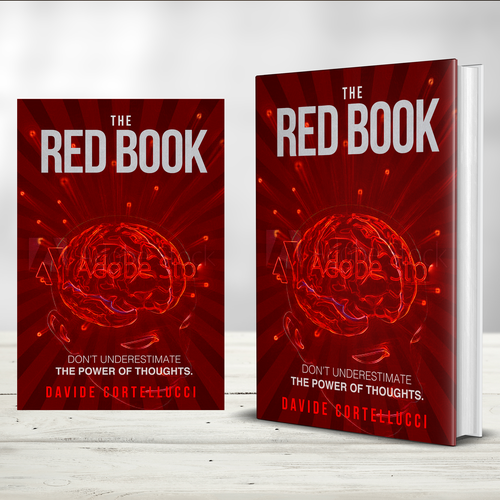 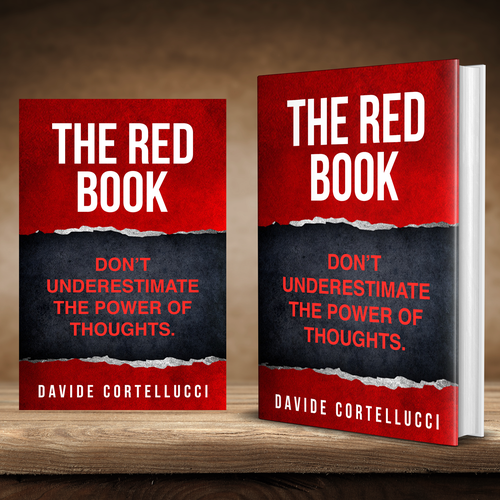 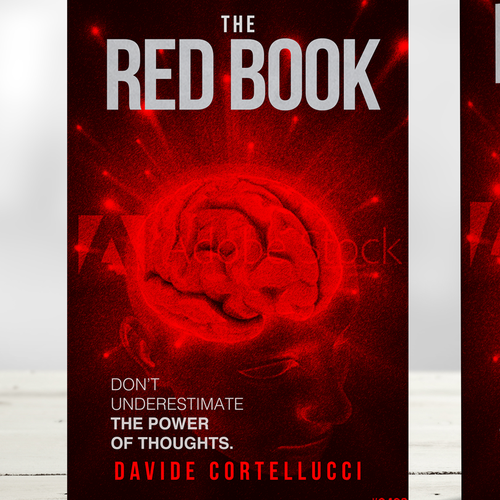 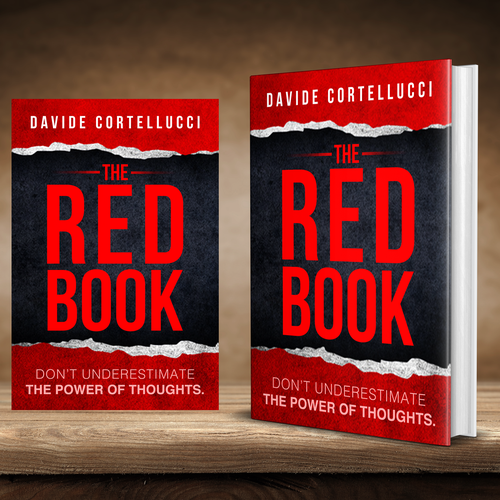 Davide lives with his partner in South East London.

The Red Book is a New Adults sci-fi book about the power of the mind, and how our thoughts can modify the physical world around us.

I like covers with drawings. I don’t mind minimalism, but sci-fi covers generally aren’t minimal. I’d like something that will make the potential reader look at the cover and have, more or less, an idea of what’s the novel about: the power of the mind, and emotions. Maybe the presence of a Red Book. The book is the first of a trilogy nicknamed by me as little yellow rubber duck (a toy that appears in the story), and I'd like a small yellow rubber duck logo on the back cover in the base corner. Also, on the back cover a small logo of a key. I did a back cover sample myself that can give an idea on how i'd like it to be done.
I would like to write a small synopsis below to give a general idea of the story.

MARTIN CLOUD is a 21-year-old man, unable to make important life decisions, still living with his parents in London and working as a barista. He knows he’s different, capable of sensing, via sickening feelings, the negativity of certain individuals.

Life as he knows it is suddenly turned upside-down by the death of his best friend, SOFIA. He’s destroyed and feels lost. After a few days, Martin is given a small RED BOOK by PROFESSOR CONTI, a physicist from the Imperial College of London. Soon after, he feels the need to shake his life up and decides to go on a solo trip through Europe.

At the train station, Martin briefly makes eye contact with a girl, MARIA, and he has a strong feeling that the two of them, at some point, are going to fall in love.

In Paris, he meets a tall, big, funny American-Canadian gay young man, CHUCK. With Chuck, Martin witnesses a strange event at the Louvre museum, and after their hotel is maliciously set on fire, they decide to stick together for the rest of the trip.

Martin starts to link similarities between some events in his past, and the story written in the red book. After the terrible experience of witnessing a terrorist attack, and through the help of Professor Conti, the idea in Martin that he possesses abilities above the ordinary strengthens.

On a train to Venice, Martin sees and meets Maria. Following an unfortunate train accident, Martin discovers a hidden message inside the red book, which takes him to the author of the book, CAESAR. Martin learns that he and Professor Conti are part of a group of people with out-of-the-ordinary mental capabilities, and he and Chuck join them to learn how to handle the powers of thoughts. Martin discovers how his mind can produce and modify the structure of matter.

The training is suddenly disturbed by the news of a group of extremely dangerous individuals, which Caesar refers to as the SINISTERS, led by MORS, which slowly as if it was a game, wants to bring the existence of humanity to an end. The Sinisters are capable, through their strong baleful powers to hold and induce fear into people and to create the dark-void, a dense light-sucking cloud capable of devouring matter.

The Sinisters kidnaps Maria and Cesca, taking them to an abandoned German-colonial town in the Namibian desert, to be used as bait. In the eerie village, two mighty fights of light vs malign are taking place.

I'm going to attach a few pictures of covers I like and the basic back cover I did myself as to indicate the placement of the yellow duck and the key logo.

I hope this helps.

I don’t like dull covers. I really don’t like computer generated images that looks like a cheap CGI. I don't like the use of photos, only drawings. I don't like fonts that are too elaborated and difficult to read at first glance.

I Know Jesus Christ Is Real
399 $US
Men, Women, Young Adults
51
entries
17
designer graphistes
Design a fantasy novel cover for a book about blood magic.
GBP 159
It would be a mostly female audience from the uk/ us. The book has romance and royalty elements so it mostly appeals to
83
entries
31
diseñadores
Cavities No More
C$ 529
The book is primarily aimed at parents of young children. Anyone involved with the care of children. Nurses, public heal
95
entries
25
designers
I need an eye catching ebook cover for my LitRPG story
US$199
People who are interested in role-playing games and the LitRPG (or Gamelit) subgenres of Science Fiction and Fantasy.
47
entries
21
diseñadores
Book design for: How to Live a Normal Life in an Extraordinary World
539 $AU
Seekers, searchers, question-askers, the curious, unsettled and those exploring change.
47
entries
16
designer graphistes
Fairytale Retellings - a rebrand for a four-book series, starting with an Aladdin retelling!
$329
young adult story, anyone who enjoys aladdin retellings, but aimed at teens, specifically girls.
56
entries
22
diseñadores