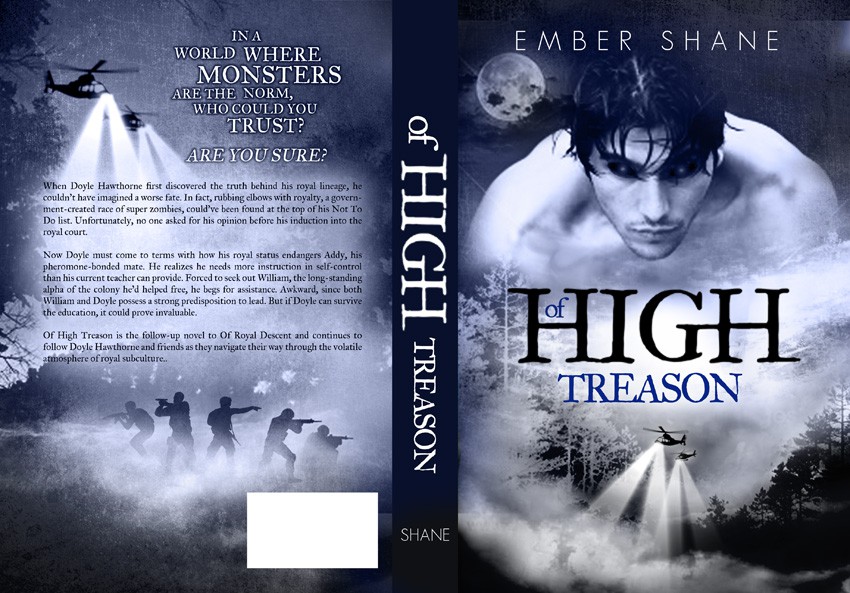 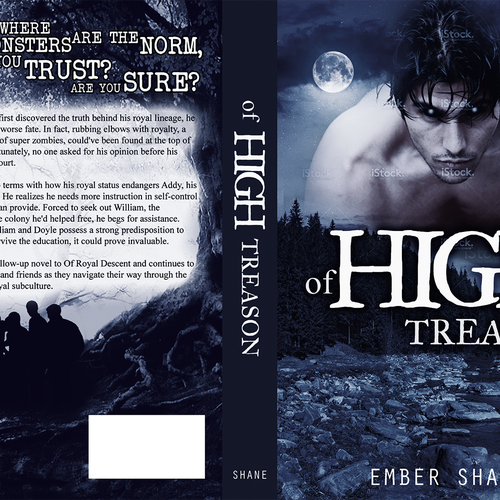 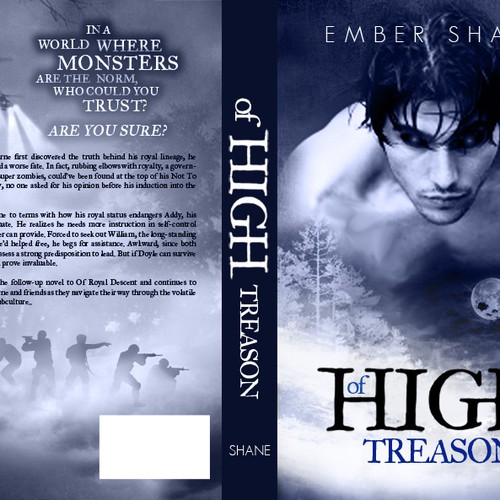 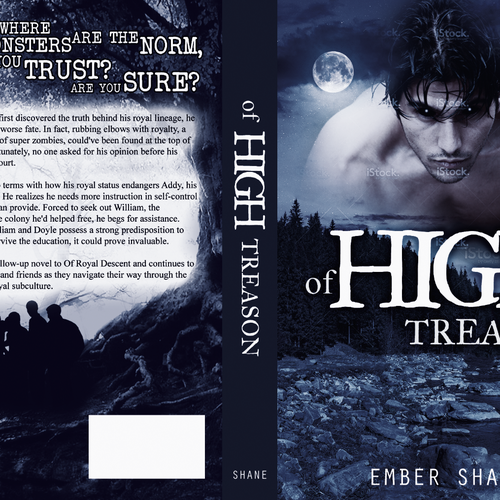 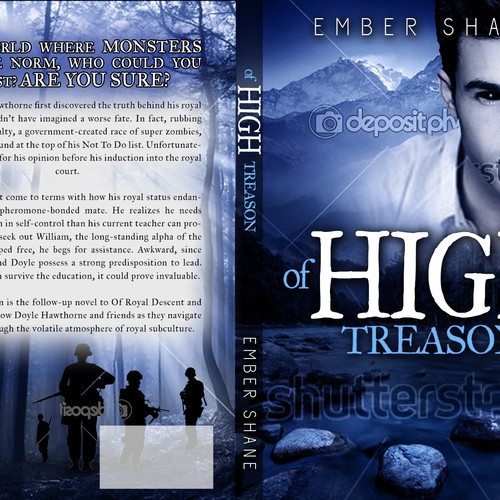 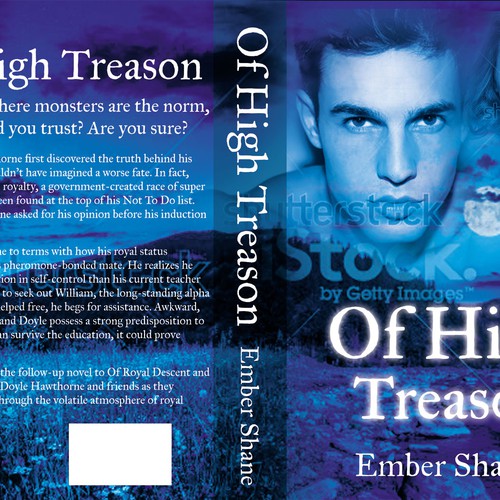 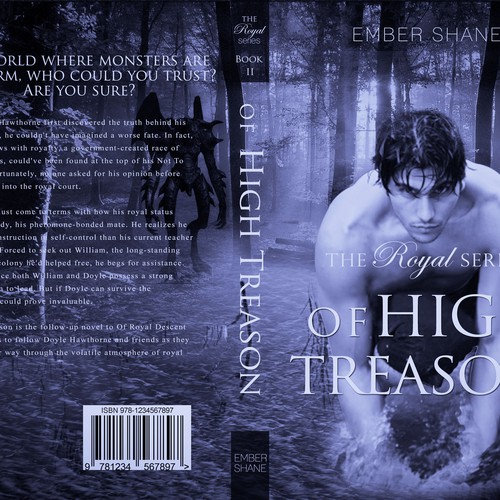 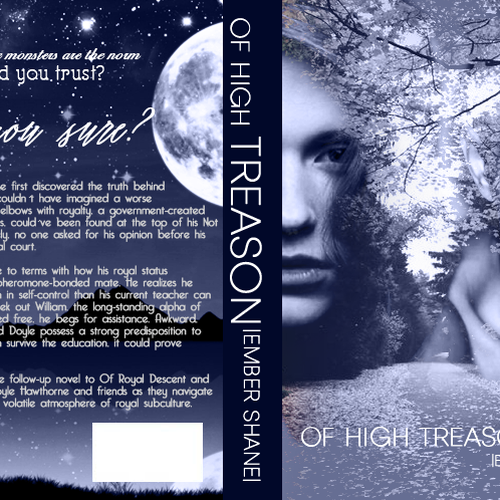 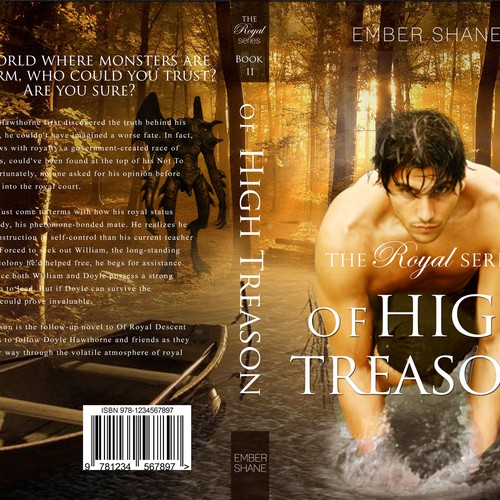 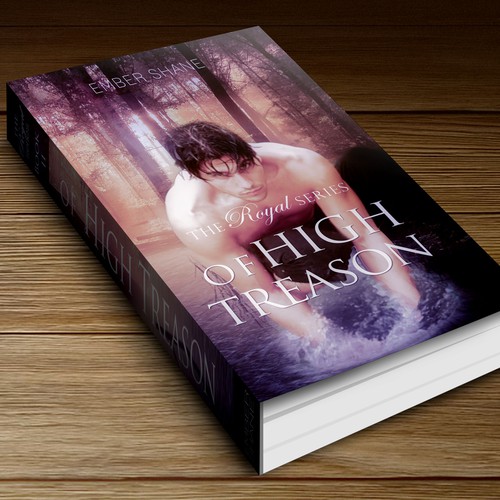 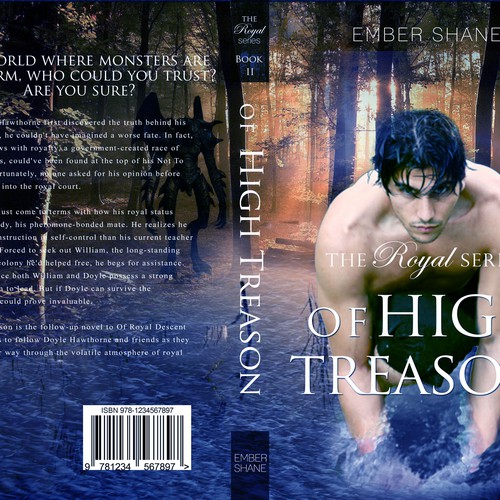 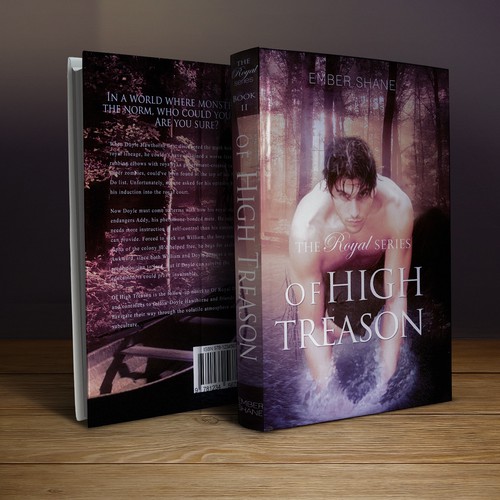 I am a self-published paranormal/sci-fi romance writer targeting the new adult age range.

I am in need of a cover for my book, "Of High Treason". It is a paranormal romance and is the second book in a trilogy. I need a full book cover design (front/back/spine) to fit a 6×9 format with 323 pages. The front cover must function well for an eBook also. There will need to be a 2” x 1.2” white box for the ISBN barcode. Cover art should have a minimum of 625 pixels on the shortest side and 1000 pixels on the longest side. After a winner is chosen, I would like to have access to the entire photoshop file just in case I need to play around with the back blurb before publishing.

Author: Ember Shane
Title: Of High Treason
Back cover blurb:
In a world where monsters are the norm, who could you trust? Are you sure?

When Doyle Hawthorne first discovered the truth behind his royal lineage, he couldn't have imagined a worse fate. In fact, rubbing elbows with royalty, a government-created race of super zombies, could've been found at the top of his Not To Do list. Unfortunately, no one asked for his opinion before his induction into the royal court.

Now Doyle must come to terms with how his royal status endangers Addy, his pheromone-bonded mate. He realizes he needs more instruction in self-control than his current teacher can provide. Forced to seek out William, the long-standing alpha of the colony he'd helped free, he begs for assistance. Awkward, since both William and Doyle possess a strong predisposition to lead. But if Doyle can survive the education, it could prove invaluable.

Of High Treason is the follow-up novel to Of Royal Descent and continues to follow Doyle Hawthorne and friends as they navigate their way through the volatile atmosphere of royal subculture.

Included is a file for the winning design for the first book cover. I will need Of High Treason's cover to be easily identified as belonging to the same trilogy (branding). I would like to keep the blue overlay for the new design, as well as similar fonts, and Doyle's black eyes with eye shine. Also, a subtitle for this cover will not be necessary.

The main character, Doyle, spends most of the book in the Cumberland Mountains, so I would like a mountain/forest backdrop for the cover. There's a couple scenes involving a river, and one with a small waterfall (maybe 5 ft in height). Everything takes place in autumn, so images with leaves on the ground/in the river are a plus.

I'm including links for images I like for Doyle, Addy, and backdrops. I don't require Addy be on cover. I just want whatever flows best, whether she's included or not. The image link for her uses the same model as the original cover. The images for a possible Doyle is what I will be the pickiest with. I've included pics of two different models that fit his description the best that I've come across. The backdrop links I am the most open to changing. They're there for a general reference as to my taste. Feel free to try one of those or one of your own.

As far as the back cover goes, I love the silhouettes for the four main characters the designer did for the original cover. It would be awesome if I could continue silhouettes for this cover as well. There could be a handful of crouching men among the trees/along the ground as this would represent Doyle and the colony of monsters he's hanging out with. Or maybe a line of silhouettes of men with rifles as that comes into play at some point.

Business Book Cover for Stock Traders Needed - Clean, Commanding, and a little bit Edgy
$ 299
The typical reader would be high net-worth investors, professional traders, and finance professionals. Mostly white-coll
31
entries
15
Designer
Human Behavior: The Psychology Behind Why We Smile, Strive, and Sing
$499
readers 12-16
144
entries
22
designers
Design the cover of my new book on bankruptcy!
US$399
People who are struggling with debt and are looking for a way out.
155
entries
27
designers
Wanted: Kick Ass Book Cover For Men's Self Help Blockbuster
GBP 949
Wide range of men with problems such as depression, disease, unhappiness, men looking for training, nutrition & mindset
314
entries
52
designers
Cover Design for The Awakened Being
$325
Spiritual seekers, women 25-45, all people who resonate with the idea of waking up to the wonders of the world and all t
44
entries
13
デザイナー数
The Swiss Made Egyptian
A$269
Doctors and researchers. Professionals who are looking for inspiration from success stories. People living and working a
23
entries
9
designers

Comienza ahora
Design a stand-out Book cover for 'Remember Who You Are'
AU$ 399
Remember Who You Are is for those who have been getting this niggling feeling that there is more to life. It's for those
96
entries
22
Designer
Design a unique and powerful cover design for a self-help book
$299
Women, mothers, those aged 19-65+ years old. Those who battle with their past, those who have trouble with self confide
167
entries
36
designers
Design Super-Cute Cover for Book on Dog Health and Happiness
199 $
This book is designed for dog owners and lovers in the US and elsewhere! The audience will probably be more female than
121
entries
25
Designer
Design A Warm Book Cover About Dogs That Teach Us Life Lessons
$ 299
professionals in leadership roles
166
entries
53
Designer
Create a award winning book cover
US$399
Men between the age of 25 to 40
120
entries
32
designers
Design for a tale of multicultural love
US$299
Women, 18-64, nationwide
18
entries
11
designers
Más información sobre diseño de portada de libro o revista
Vea como funciona