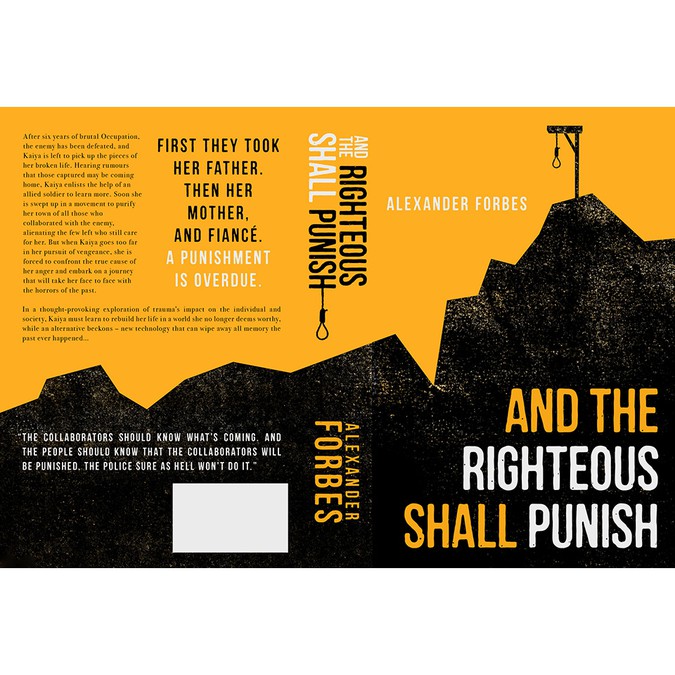 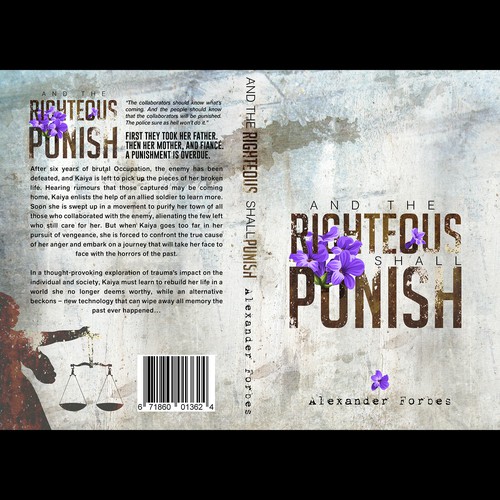 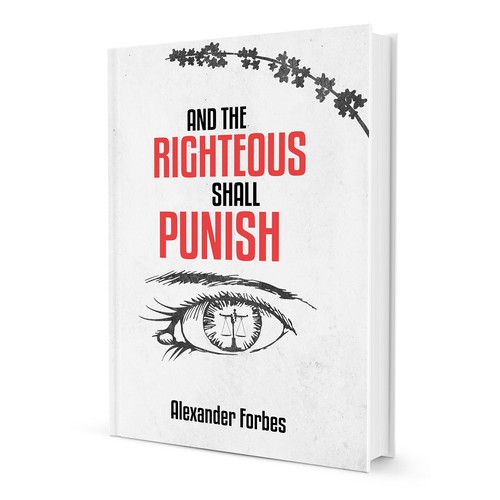 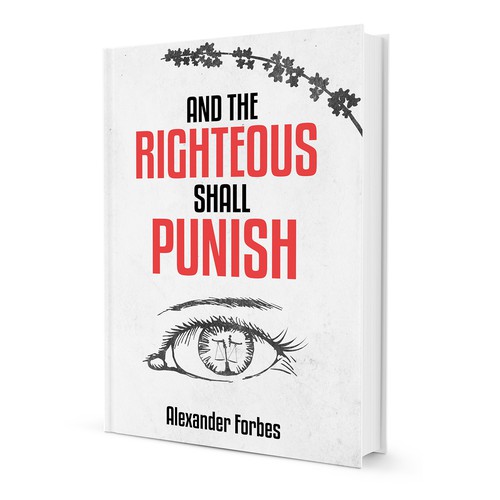 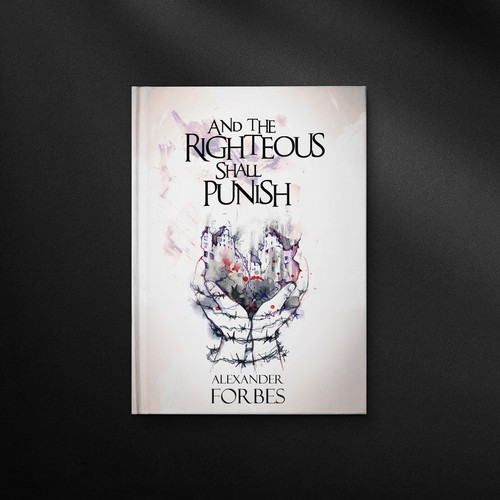 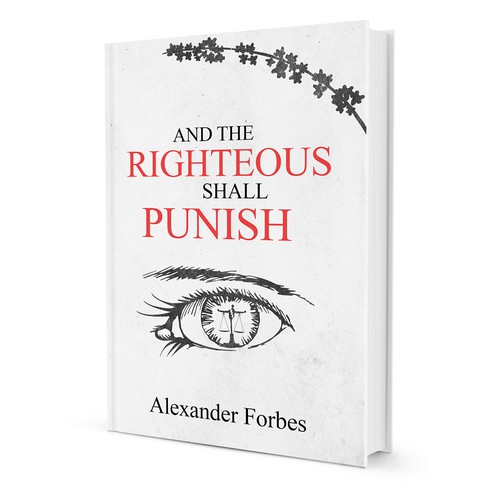 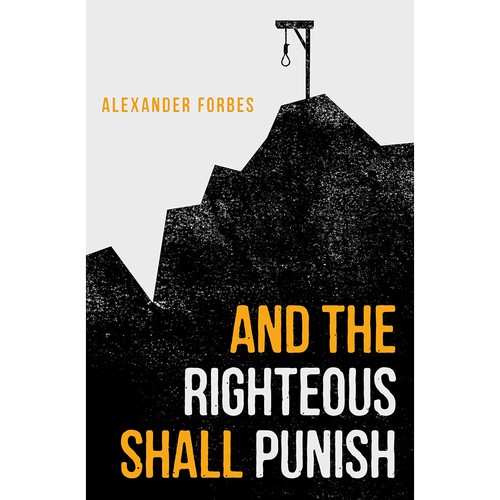 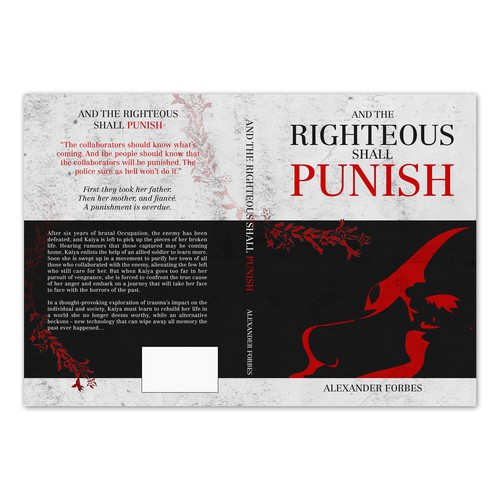 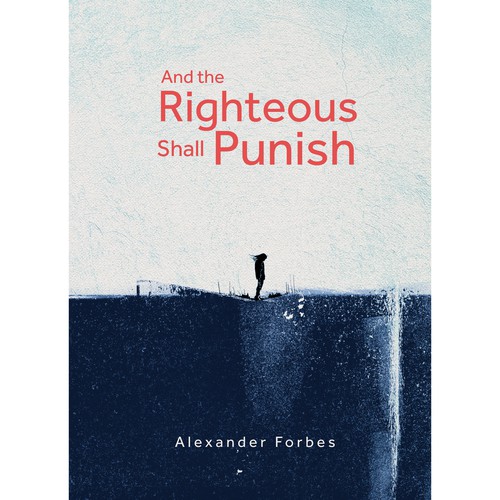 And the Righteous Shall Punish

And the Righteous Shall Punish is a novel focusing on the emotional journey of a young woman struggling to overcome the recent military Occupation of her town.

Wide distribution - it will be going to all of these venues and more.

Like: Relative simplicity with colour that 'pops' against the textured background.
Like: Graphic does not attempt to give a scene, but an abstract representation.
Like: Elegance through simplicity.

The book is quite serious in tone and deals primarily with the emotional journey of the protagonist, Kaiya, as she comes to terms with life after the liberation of her town from an occupying army at the end of a six-year war. At the beginning of this war her father, who had been Police Commissioner, led a resistance against the invaders, but was betrayed by an officer who, as reward for his betrayal, was made the new Commissioner. Kaiya’s father disappeared, and she comes to know during the book that he was for some time in an enemy POW camp. Half way through the war Kaiya also lost her mother and fiancé, both taken in a town-wide punishment for protests against the brutality of the police force. These losses are the backdrop for the opening of the novel, which occurs very shortly after the war has ended.

Thematically, the book revolves around who is and is not a legitimate arbiter of punishment for prior transgressions, and the way that experiences of trauma can manifest themselves in future violence. A secondary theme also permeates the narrative, that of the rightness or otherwise of using new technology to eliminate bad memories, and the implications of this process on those who are left behind (this is possible in the alternative universe of the book).

Kaiya blames ‘collaborators’ for the war and takes part in two riots calling for the immediate punishment of anyone who aided the enemy or corrupt local police during the war. Vigilante punishments, up to and including hanging, are common, though the most frequently described are the stripping, shaving, and assault of women who slept with enemy soldiers. During the second riot Kaiya beats a man almost to death, which propels her into a restorative justice program and the acknowledgment that the true cause of her anger is her rape at the hands of an allied soldier she had hosted during the war.

While there is a great deal of violence and Kaiya loses both a friend and her recently-returned fiancé throughout the book, she also develops new attachments which give her some image of a bright future, and her outlook changes throughout the book as she comes to accept her circumstances and the need to build a new life.

IMPORTANT: This book is not a war book. While there is violence, this is not what the cover should focus on. The narrative style is 'distant', as though the character's experience of the events is somehow muted. The main character's violent actions are a hard shell to a hurting inside. Further, the character's relationship with police is not simplistic - it is complex. While she protests against them in the book, an old family friend is the new Commissioner, and she becomes close to an officer throughout the story.

The most important and recurring images within the book are (1) lavender and (2) the world as seen through a window. This latter 'image' is reflected in the narrative itself, where (as described above) the character's experiences of events are somewhat deadened. Hangings are also a recurring image. The use of these images is not mandatory. If using such images (either in a literal or abstract form), they should not be really "in your face". This narrative is restrained - it's not (for example) a crime novel.

The cover should not be ‘busy’ with images and events. It could convey a sense of authority, perhaps authority derived from institutions such as courts and the law. This authority, however, should be decaying. There could also be a sense of Kaiya’s desire for an imagined, perfect future and this being inside her and contrasted with the violence and darkness of the current world as she perceives it. The title font (or illustrated title) would be better described as ‘stately’ or ‘looming’ but not ‘lyrical’ or ‘elegant’. Note that in this previous sentence I am addressing only the font of the title, not necessarily the entirety of the cover.

A design that can get these ideas across as minimalistically as possible would be good.

EXTRA NOTE: Regarding the title "And the Righteous Shall Punish". If one is playing with different sizes or positions (or anything that requires that some words will be more important than others), then the word 'Punish' is the most important. Following that very closely in important is 'Righteous'. Shall is much further behind, with 'And the' being the least important. So two lines of text where 'Shall Punish' go on the second line, with 'Shall' being more prominent than 'Righteous' and equally prominent than 'Punish' doesn't focus attention on the most important words in the title.

The book is meticulous in avoiding physical description of the characters (Kaiya could look like any young woman) thus it would be inappropriate to feature a character on the cover in any way that might hint at an ethnicity or physical shape etc.

Clean and clear. Classic, 'noble' kind of font.
Title takes centre stage, with an image that abstractly represents some aspect of the book and does not clash with the title.

Comienza ahora
**Blind Contest** Design a modern retro book cover with potential for follow-up paid projects in the book series
299 US$
The target audience is young mothers, mostly millennials and generation x, who want to save time and money by using natu
185
entries
18
designers
Design a stand-out Book cover for 'Remember Who You Are'
AU$ 399
Remember Who You Are is for those who have been getting this niggling feeling that there is more to life. It's for those
96
entries
22
designers
Create a compelling cover design for Success Visionaries.
299 $
Anyone, male or female, not age specific, who have visions and aspirations to be accomplished and successful at somethin
75
entries
23
Designer
Create a eye catching book cover to help first generation college students succeed!
US$ 399
18-35. First Generation college students. Driven. Seeking aide.
121
entries
25
designers
Modern Self-Improvement Book Cover Design called "Spiritual Sagacity"
$ 799
Christians Businessmen Self-Improvement Interested Individuals 15-60 United States, Europe, Africa, South Africa, S
217
entries
37
Designer
On Winter's Eve, the first of two to four titles in this series.
US$ 399
Children to adults. It's a very mature middle-grade novel meant to be enjoyed by a wide audience. It has aspects of a fa
43
entries
17
designers
Más información sobre diseño de portada de libro o revista
Vea como funciona