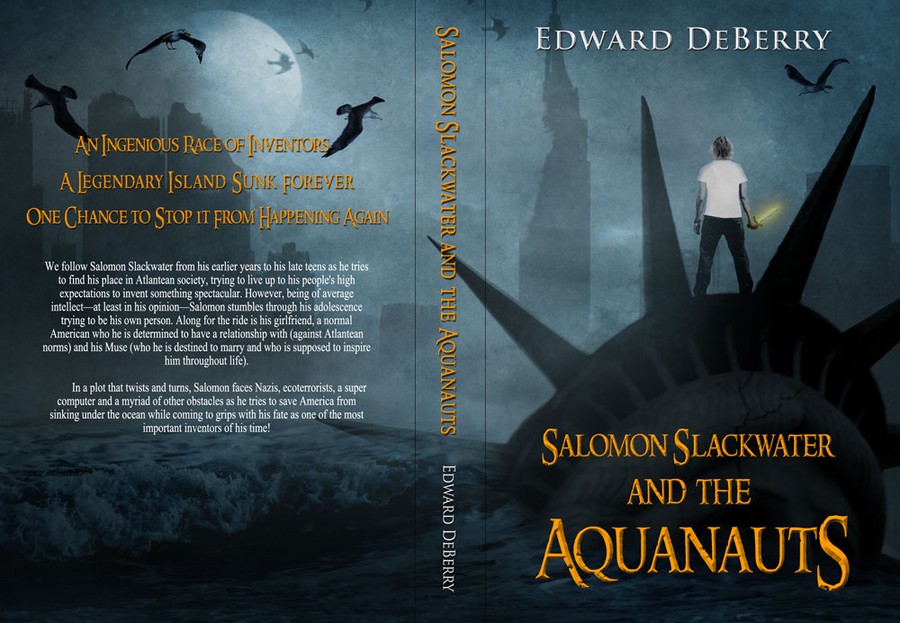 The Salomon Slackwater Series, Book One

Title: Salomon Slackwater and the Aquanauts

Back of Book Summary:

We follow Salomon Slackwater from his earlier years to his late teens as he tries to find his place in Atlantean society, trying to live up to his people's high expectations to invent something spectacular. However, being of average intellect—at least in his opinion—Salomon stumbles through his adolescence trying to be his own person. Along for the ride is his girlfriend, a normal American who he is determined to have a relationship with (against Atlantean norms) and his Muse (who he is destined to marry and who is supposed to inspire him throughout life).

In a plot that twists and turns, Salomon faces Nazis, ecoterrorists, a super computer and a myriad of other obstacles as he tries to save America from sinking under the ocean while coming to grips with his fate as one of the most important inventors of his time!

A full-color cover for young adult lit. Think Percy Jackson. FRONT COVER: Holding a dagger in his right hand, a seventeen-year-old blond-haired blue-eyed boy in white t-shirt and black jeans is standing at the very top of (on the head of) the Statue of Liberty, which has a real flaming torch (not a fake one), and the Statue is up to its neck in seawater. BACK COVER: Seagulls carrying various trinkets are flying over New York City, which is almost completely underwater.

If you don't do anything beyond the contest details, that will be fine with me. But you're free to be creative with two aspects: On the front cover, you can put things in the water (shark, octopus tentacle, the A train...) and on the back cover, you're free to have the seagulls carrying whatever you want, from the funny to the downright bizarre (just remember this is a book intended for everyone.)

Comienza ahora
TITLE: Seven Words You Never Want to Hear - Must have a cover that makes readers want to open book.
CA$ 1’099
This book is written to professing Christians. The narrower target audience is people who have professed faith but are n
213
entries
48
Designer
Cavities No More
CAD 529
The book is primarily aimed at parents of young children. Anyone involved with the care of children. Nurses, public heal
95
entries
25
diseñadores
Book cover for non-fiction
$ 199
People who want to be prepared when SHTF.
84
entries
10
Designer
Book Cover Design for a Fantasy Novel about Mermaids
EUR 359
This book will be read by French speaking readers, mostly womens, between 20 and 35 years, maybe more.
49
entries
24
diseñadores
Stories behind her scalpel: a resource handbook for aspiring, in-training and practicing women oral and maxillofacial s
USD 399
Students, residents and practicing dentists or surgeons.
38
entries
8
diseñadores
Book cover design (Redesign) to capture young adult audience (mid grade)
159 GBP
The book is aimed at 8-12 year olds but it is written in a similar style/influence of Harry Potter and His Dark Material
30
entries
8
diseñadores
Más información sobre diseño de portada de libro o revista
Vea como funciona