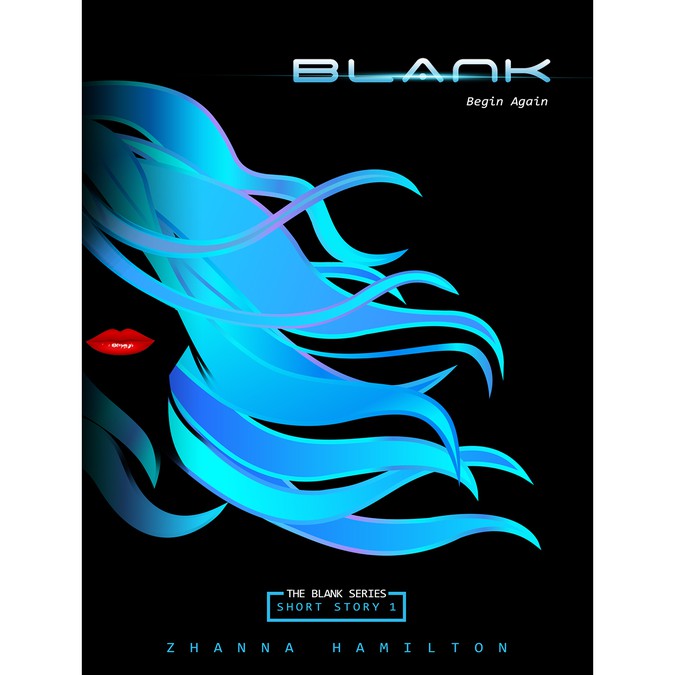 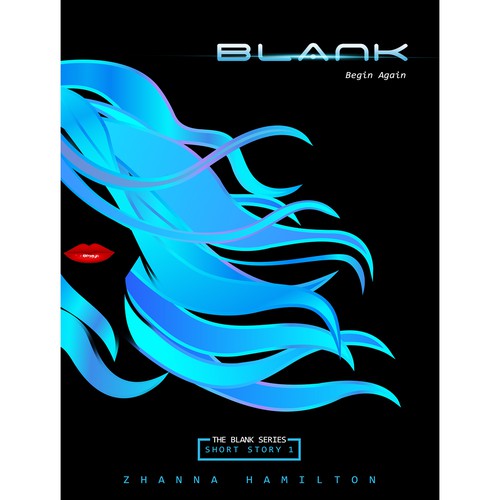 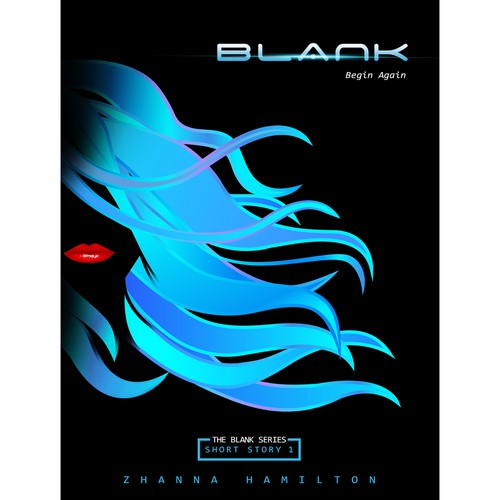 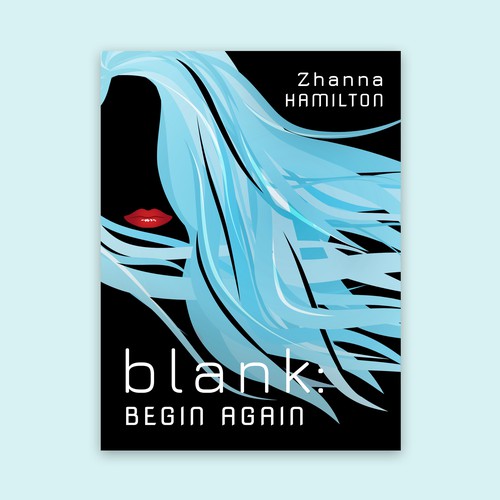 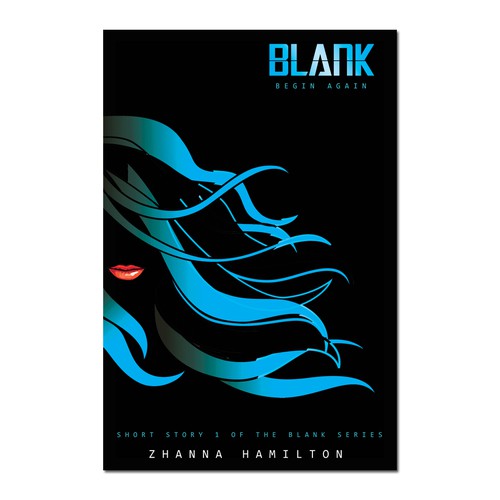 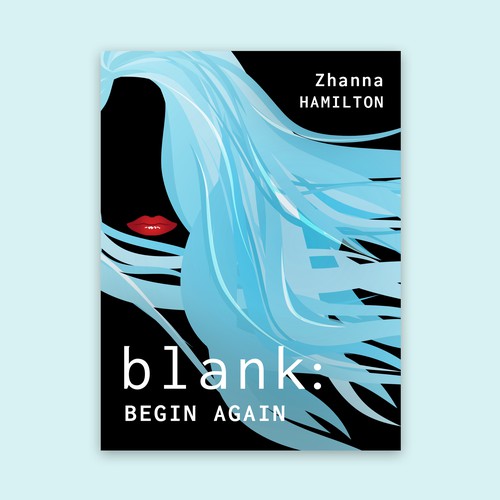 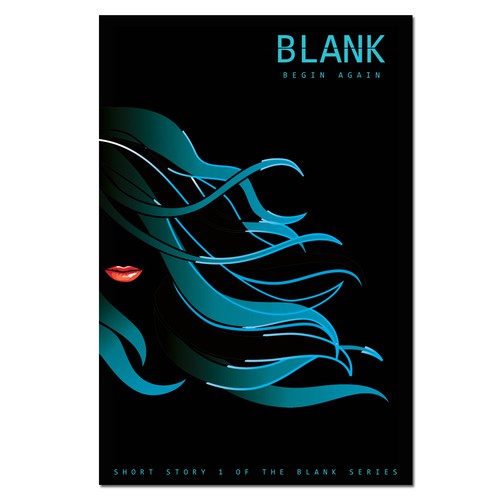 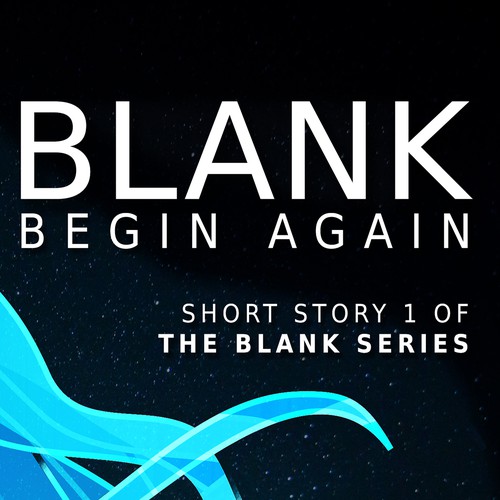 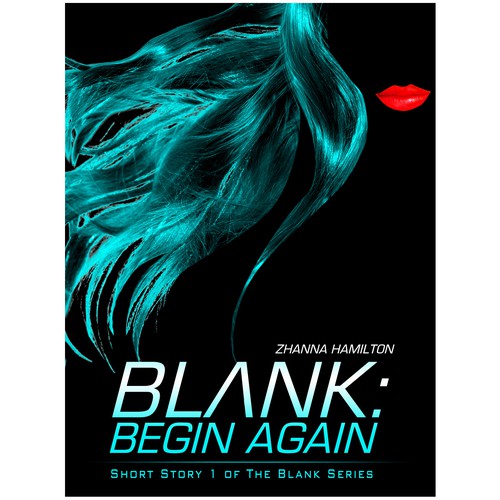 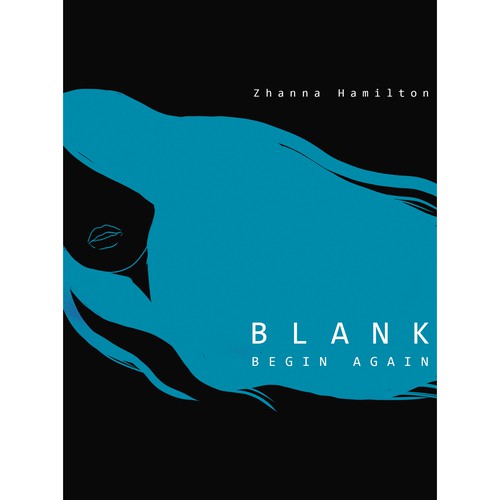 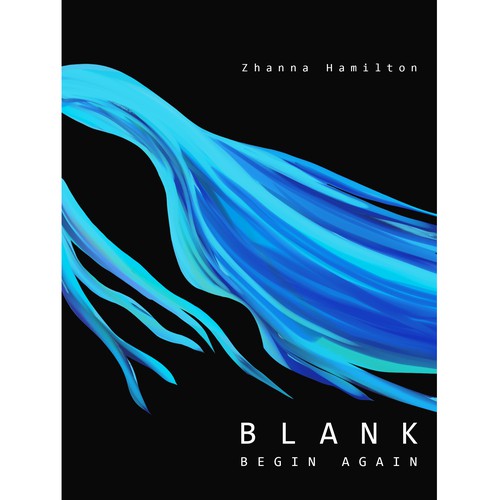 Blurb:
Her name is Blank. She's a military spy bot. Well... was a military spybot. Until she stole a reconnaissance starship and left Earth. On the run and in search of true freedom, she must reconcile that her once human mind is now the world government's property so long as she's in this artificial body. According to them, they own her and are on the hunt to get their malfunctioning spy bot back. According to her, she belongs to no one and plans on keeping it that way--even if she has to kill.

This is the first cover of a short story series and it needs to have a noir feel to it. Think Blade Runner, Blade Runner 2049, Gattaca, Sin City

What I'm looking for:
Background must be all black
Other colors: blue images, white font
Font should have a scifi feel
Very minimalist
Abstract enough to be used for the entire short story series with the change of some wording
1500x1998 size
I've attached an illustration of the main character, Blank, though this should not be included in the cover.

The story includes wormhole travel where the entrance is described as a glowing blue tunnel; the inside is described as follows:
"I saw where I was headed--Neptune and its fourteen moons. Surrounding me was a ring of galaxies, scrunched up, bright and almost glistening had they not been static. Behind me, those galaxies elongated like led lights stretched into distortion. I was getting used to the turbulence and colors whizzing by when I found myself on the other end, speeding through space near the dark blue planet. I made it. "
--
The main character's (image attached) hair is light blue; if you were doing something abstract that imitated long light blue hair, it could be nice.
--
An abstract blue, minimalist image is preferred.
--
Placing of the title does not have to be at the top, it could be on the mid right corner, like something being typed
--
I like the font Consolas, though something similar will do too.
--
Can be sexy, seductive, though should remain abstract.

No people; no space ships; no planets;

The Demon of Miller's Crossing
199 $
Fans of paranormal and ghost fiction
30
entries
11
Designer
$$$ Open to your creativity, Flexibility in design Options $$$ NO REFUND for Author
$529
Men & Women between 26-65 world-wide Professionals who are board in their career and getting burned out Motivated to m
337
entries
54
デザイナー数
Book cover reflecting an amazing journey playing professional basketball in Greece
399 US$
Basketball players (12 and up) Athletes (12 and up) Coaches FCA (Fellowship of Christian Athletes) Sports Psychology
169
entries
42
designers
Looking for the best cover for reports on latest events.
€ 179
It's a series for europeans with good education who want information to better understand relevant national and internat
46
entries
9
Designer
Create a Bestselling Book Cover
CAD 269
New Mothers, Second Time Mothers Age - 20 to 40 Years of Age
82
entries
25
diseñadores
Simple Chess-inspired Sci-Fi/Space Fantasy Cover
US$ 199
Young adults, adults 13+ Fans of Star Wars, Hunger Games, Star Trek
39
entries
17
designers

Comienza ahora
Book Cover - "A Brave Heart by William Wallace", a memoir of recovering from traumatic ski accident
US$ 1.199
The book is for people who have been dealt a serious setback in life and are looking for motivation or guidance on how t
125
entries
16
designers
Design a book cover that includes a backround that looks like blue blueprint paper.
399 $US
- Any high school students who are looking to attend college. - College freshmen and sophomores. - Students looking
9
entries
3
designer graphistes
Creative book cover featuring large butcher’s knife dripping blood
AUD 269
31
entries
15
diseñadores
Classy cover for a memoir. A woman discovers a family secret; her real father was a priest.
US$ 499
Classified as memoir, I see my audience as women, middle aged plus. Women interested in family relationships and the inh
158
entries
38
designers
Design a dark and foreboding Crime Thriller Cover
GBP 239
Those interested in mystery thrillers and crime novels. Mostly adult audience
77
entries
25
diseñadores
paper back and ebook cover
GBP 319
Someone is reading this book to learn the most effective way to write a to-do list that will keep them motivated and pro
51
entries
20
diseñadores
Más información sobre diseño de portada de libro o revista
Vea como funciona