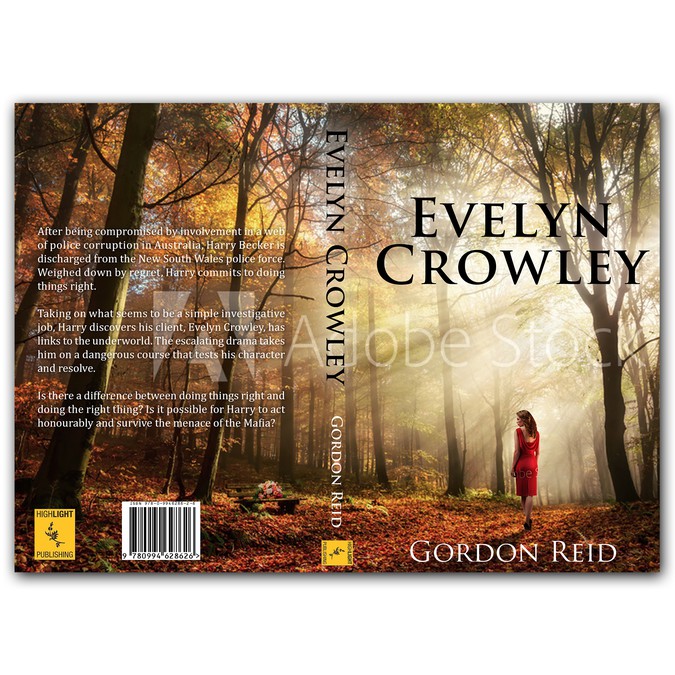 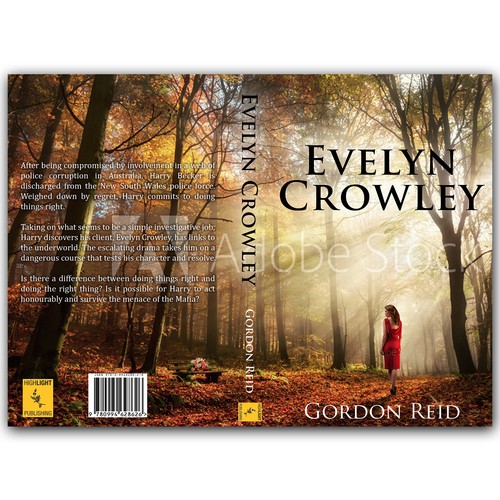 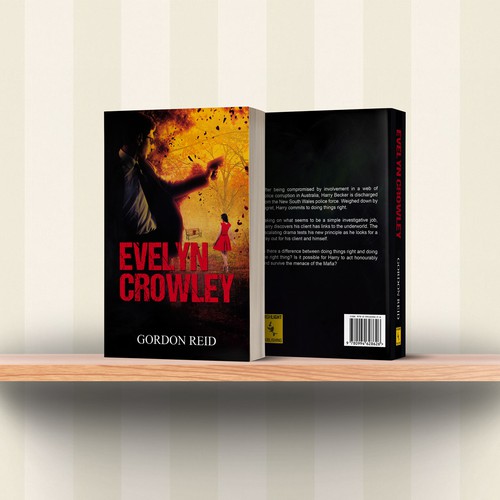 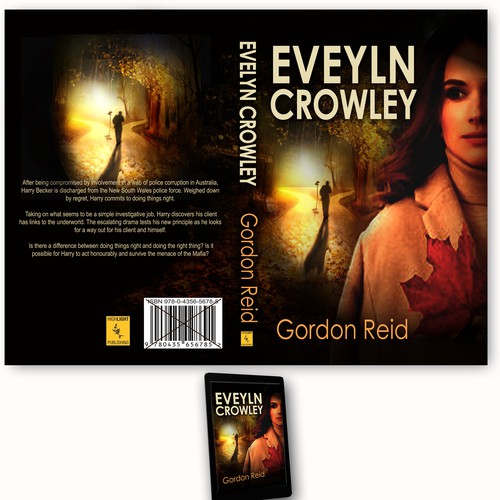 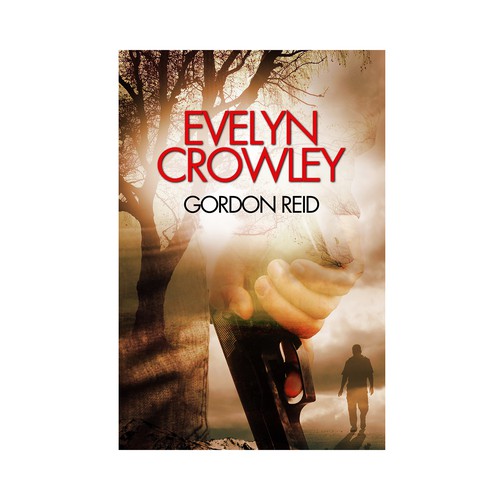 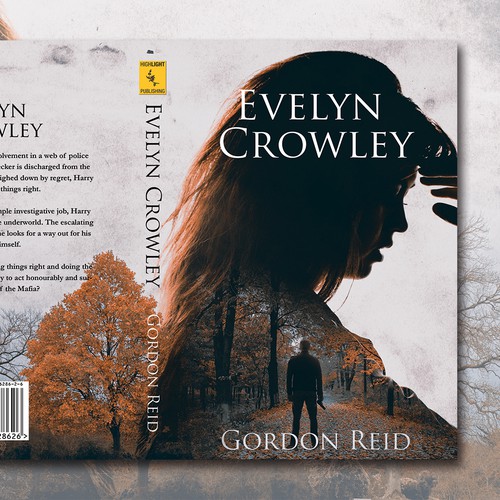 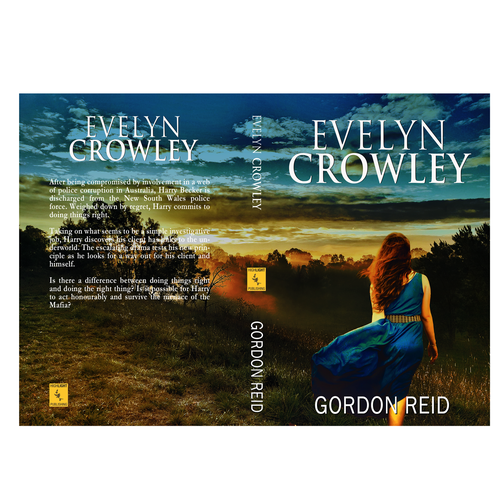 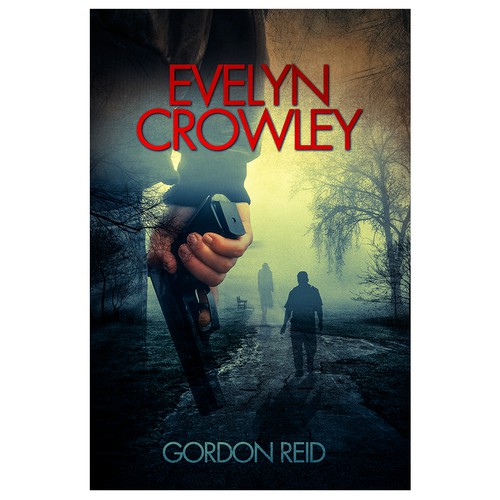 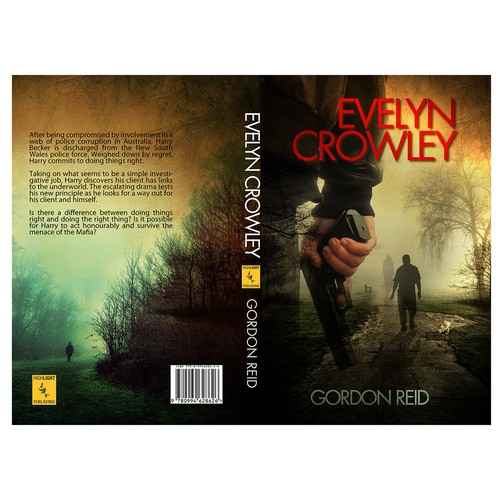 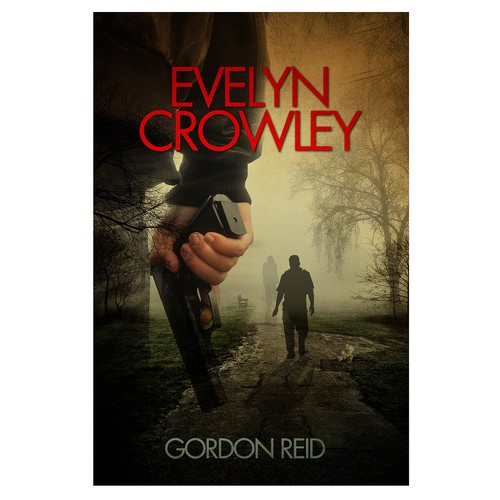 A crime story with a love story subplot. This novel definitely does not belong to the romance genre.

Set in 1990s in Canberra Australia.

DESCRIPTION OF THE NARRATIVE
After being compromised by involvement in a web of police corruption in Australia, Harry Becker is discharged from the New South Wales police force. Weighed down by regret, Harry commits to doing things right. Taking on what seems to be a simple investigative job, Harry discovers his client has links to the underworld. The escalating drama tests his new principle as he looks for a way out for his client and himself. Is there a difference between doing things right and doing the right thing? Is it possible for Harry to act honourably and survive the menace of the Mafia?

In the preliminary round of the design competition, we are interested in seeing literal/realistic designs versus symbolic designs.

The cover design needs to arouse interest and possibly suggest:
* Harry at symbolic crossroads in his life
* the shadowy but looming presence of and threat from the Mafia
* a journey that leads to escalating danger and death irrespective of the route Harry takes from the crossroad
* maybe an alluring image of Evelyn, perhaps a silhouette figure so stock female images do not clash with the author's image of her. She is pivotal to the narrative as the title suggests although the story is about Harry - his choices, actions, and the consequences.

'Evelyn Crowley' is set in the Australian capital, Canberra, in the mid 1990s.

The author has a preference for autumnal colours, but the publisher is open to other suggestions. See uploaded park images where Mafia killed two significant characters in the novel. The park needs to have autumn colours if you consider using it.

Harry does not wear a hat if you are selecting stock imagery of a silhouette male figure.

Author's description of Evelyn Crowley:
1. Evelyn has a rich brown hair with a suggestion of curl/wave. It is parted in the middle and hung down on both sides, showing only a triangle of pale forehead. Below that is the kind of face you see in movies of a woman staring from a narrow window in some back street on the other side of the world, where you wouldn’t want to walk alone.

2. Evelyn is thirty-eight years old, an Italian beauty whose dress and style suggest that she is refined and extremely affluent. She is a tall woman, statuesque - neither plump or thin but is voluptuous.

Testing Idea
299 US$
20
entries
8
designers
Book Cover for why liberals hate conservatives and vice versa
US$ 299
70% men, 30% women. Major interest in current affairs, politics, psychology, sociology.Age range 30 and upwards. High
321
entries
51
diseñadores
Book cover for non-fiction
199 $
People who suspect they have a narcissist in their life and are looking to get it confirmed.
225
entries
19
Designer
Book cover for a hilarious book about cats
$ 399
People in their late 20s and 30s; people who love cats and cat memes; people who love crime novels; people who love hist
60
entries
22
Designer
Book cover for an everyman's guidebook on achieving financial independence
€ 449
Younger professionals, older professionals, people with savings, people who are interested in financial markets but don'
373
entries
52
designers
Looking for the best cover for reports on latest events.
€ 179
It's a series for europeans with good education who want information to better understand relevant national and internat
46
entries
9
Designer

Comienza ahora
Design a book cover that includes a backround that looks like blue blueprint paper.
USD 399
- Any high school students who are looking to attend college. - College freshmen and sophomores. - Students looking
9
entries
3
designer
Cover for Fantastic Thriller in the same line as PRISONERS / Couverture pour Thriller Fantastique
359 €
25 - 55 years old, fans of thrillers, movies, TV shows, comics, adventure video games, fans of Jean-Christophe Grangé, S
124
entries
27
diseñadores
Classy cover for a memoir. A woman discovers a family secret; her real father was a priest.
US$ 499
Classified as memoir, I see my audience as women, middle aged plus. Women interested in family relationships and the inh
158
entries
38
designers
eBook cover for a crime story
€179
Any person who likes crime stories like The Godfather, The Departed, Breaking Bad, etc.
94
entries
20
デザイナー数
We need a powerful book cover for a Science-Fiction novel
359 €
The target audience is between 25-45 years old, speaks French (France, Canada, Belgium, Switzerland), who likes Sc-Fi
67
entries
12
Designer
paper back and ebook cover
£ 319
Someone is reading this book to learn the most effective way to write a to-do list that will keep them motivated and pro
51
entries
20
designers
Más información sobre diseño de portada de libro o revista
Vea como funciona