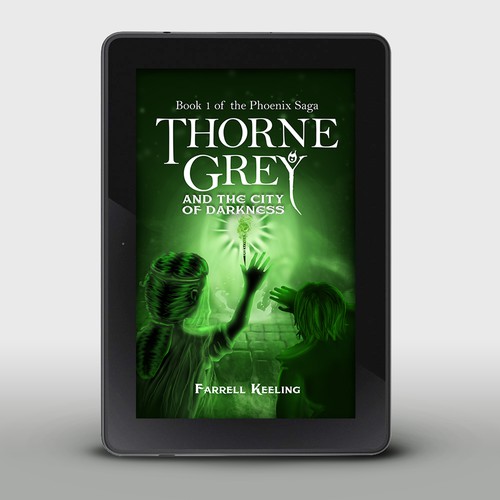 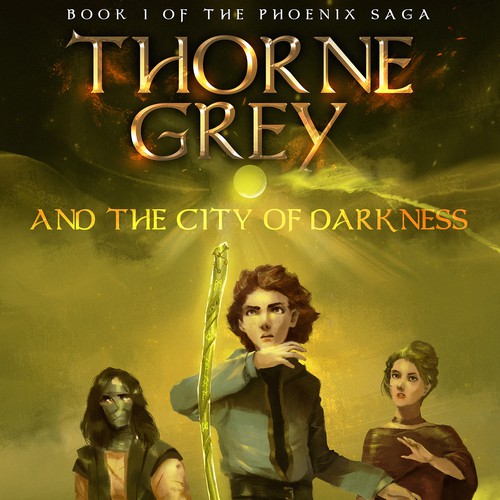 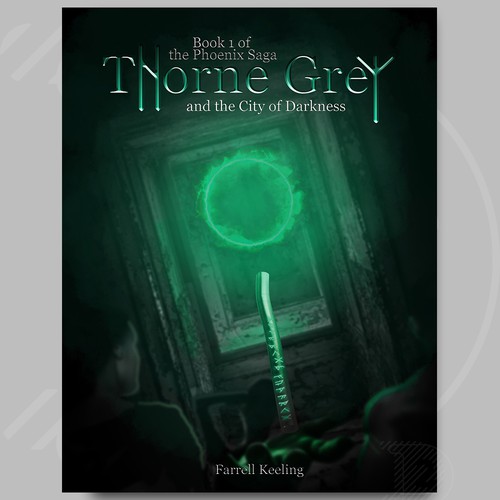 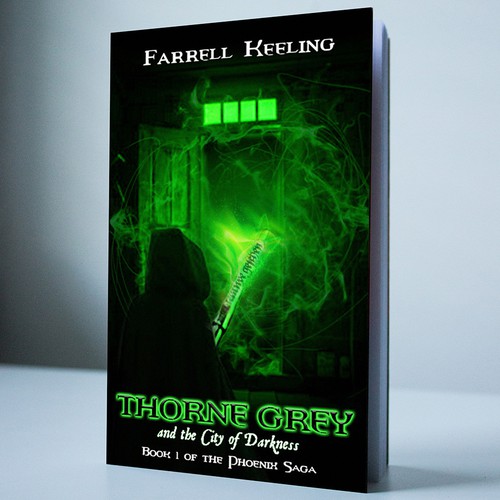 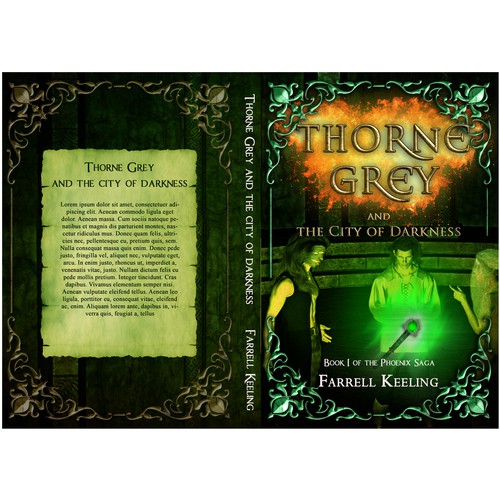 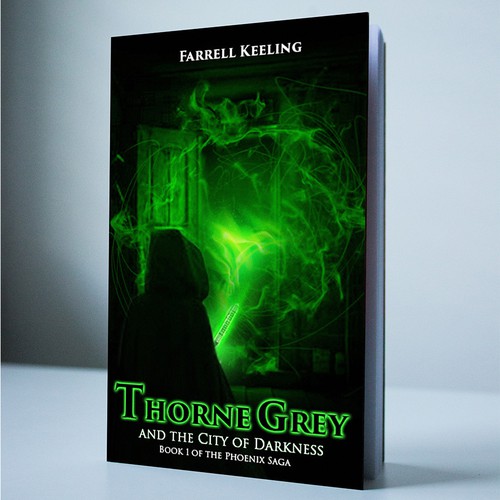 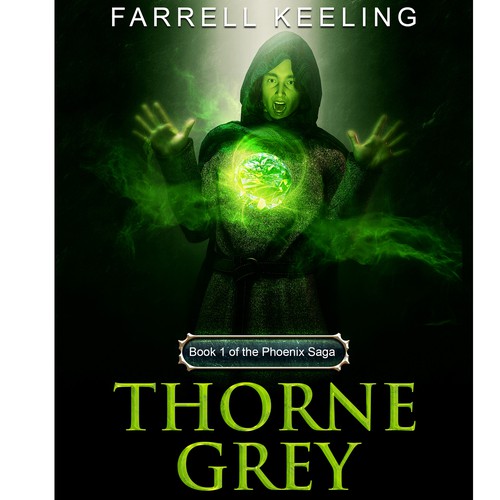 Thorne Grey and the City of Darkness

Farrell Keeling was born in Brussels and moved to England at the age of 2. He is currently completing a law degree at Sussex University but has a long held passion for storytelling.

Life in the Spire for Thorne Grey is comfortable... that is until he is sent on a mission across Horizon to destroy a dark portal to the Foglands and had a premature visit from Death.

Plunged into a world of shadow and sorcery, the young Warlock must travel with a terrifying swordsman and uncover the secrets of the City of Darkness.
The Phoenix is rising.

This is the scene I'd like the front cover to be based on:
Suddenly, the rod began to vibrate. Thorne was startled by another sudden spike in Majik, as the rod’s engravings started to furiously flash green. It then soared away from Zakariyanna’s open hand, into the centre of the room, rotating slowly around its axis; every candle it illuminated was immediately extinguished.
Thorne watched in incredulity as one of the ends of the rod became incredibly bright; so much so that Thorne had to shield his eyes with his hand. Then, without warning, the light emanating from the rod too was smothered. The room barely illuminated by the few flickering candles that remained alight.
‘Wh-What was that about?’ Thorne stuttered, staring at the slowly rotating rod.
‘Wait.’ Zakariyanna whispered, raising a hand.
As if in response to her motion, the rod hummed back into life and released a single green ball of light, which orbited the rod, following its slow rotation. Gradually, the rod increased its pace. Matching its speed, the ball crackled and hummed, moving further from the rod, as if through centrifugal force.
Suddenly, the rod fell silent and stopped rotating. Without warning, the ball flew at Thorne and, before he could raise his hands, plunged into his chest.
He staggered backwards, gasping and pulling at his clothes frantically. Zaine made to move towards Thorne but Zakariyanna grabbed his arm. ‘No, we must wait.’
Thorne glanced up at Zakariyanna. ‘Get... it out...of me!’ he whispered imploringly.
In truth, it hadn’t hurt at all, he just felt strangely numb around his arms and face. The green light had now begun to glow through his skin. He felt a strangely familiar itch, as his eyes flared.
Zakariyanna, much like Zaine, was transfixed. ‘I’d read tales but this,’ she breathed, ‘this is quite… extraordinary.’
‘There was a brief silence, broken only by the hum of the rod, as it started spinning again.
‘Extraordinary?’ said a familiar voice, ‘I am far more than that.’

Individual Character Descriptions:
Thorne (12 years old): One had no need for a wardrobe as a Novice, all Thorne had ever worn for years were robes, leather boots and trousers; although he wore a pair of black pantaloons, which the others didn’t seem to mind.
He grabbed his set of dark blue robes with tight sleeves, which were separated at the front from the waist down. On the shoulders of the robe was the insignia of the warlocks - a set of golden sparks, which he wore proudly. With a grin, he threw his clothes on and turned to the ornate mirror that hung precariously beside the door. He gazed at his dishevelled features; it must have been a particularly fractious dream to leave him in this state.
He had messy, long ginger hair. He had a misshapen nose from a fight in which it had been broken four years ago.
The feature that stood out most however, were his eyes, which were a dark grey and had a certain intensity that gave people the impression he had seen sights which would have caused an ordinary mind to crack and crumble. But surrounding his grey irises were a thin line of amber which flickered like a ring of flames. It was… unnatural… to say the least. None of the other Warlocks and Novices had the same condition, but despite the oddity of it, he revelled in the fact it made him unique.

Zaine: The Swordsman wore a black, thigh-length, sleeveless leather overcoat, his bare chest was covered by a network of scars, burns and bruises. He wore a pair of matching black, baggy trousers that were tucked into his mud coated steel greaves. His right hand was encased in a bloodstained, dark leather glove, with intricate skeletal metalwork protecting the knuckles and fingers. He grunted in apparent satisfaction and then turned slowly to face Thorne, who had backed away, nearer to the edge of the circle.
The Swordsman’s face was concealed. Not by a helmet, but by musty bandages with holes for his eyes. Raven black hair plumed from the top of the man’s head, falling to his shoulders.
However, it was not the man’s scars or appearance that concerned Thorne, but his eyes which glowed bright silver. He had heard something of these people before… read about it in a book at some point? He was sure, but for the life of him he couldn’t quite seem to remember it.

Zakariyanna: The woman standing beside him wore a gorgeous floor-length dress of shimmering maroon, which appeared to flow over her. Her nails were long and painstakingly well-polished, glinting under the light. She also wore a veil, which, combined with her dress covered her from head to toe, revealing naught but her dazzling smile. Yet there was something different about her. He got the feeling he was only scratching the surface with her appearance

Description of the 'rod': Inside, surrounded by a jumble of trinkets, lay a metal rod, its features not disturbed after months of rest. The rod was engraved with strange but beautiful runes, so intricate that Thorne held the opinion that they couldn’t have possibly been carved out by a human smith. The workmanship was too... perfect. And yet its shape was unusual; curving to a sharp point, like a horn or a fang.

Font Style: Have 'Thorne Grey' in flames and then the rest of the title ('and the City of Darkness') in smaller text of the artist's chosen font.

Mood: the front cover should not be overly dark. Ideally I would like it to portray a sense of wonder