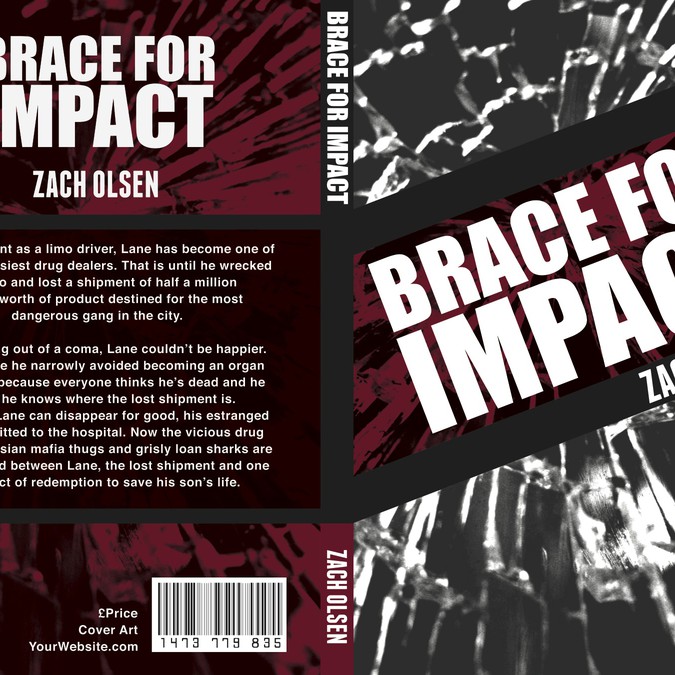 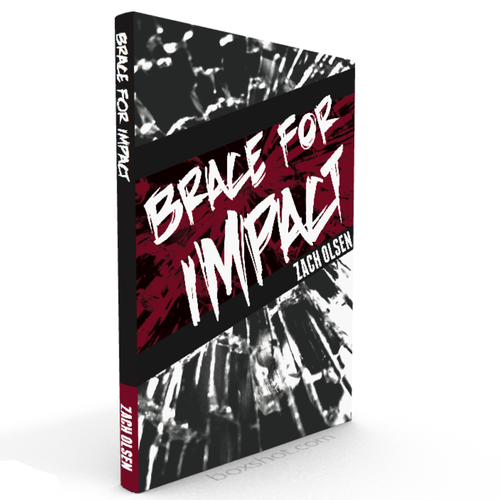 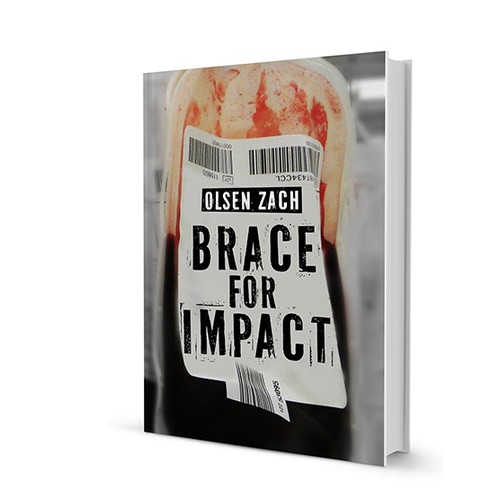 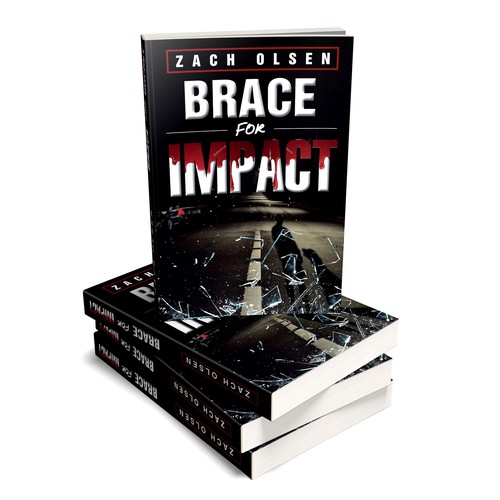 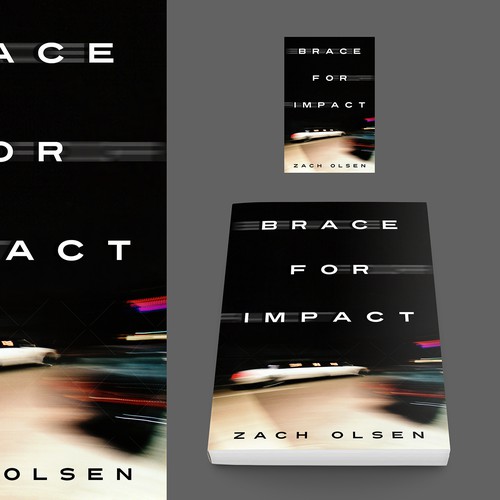 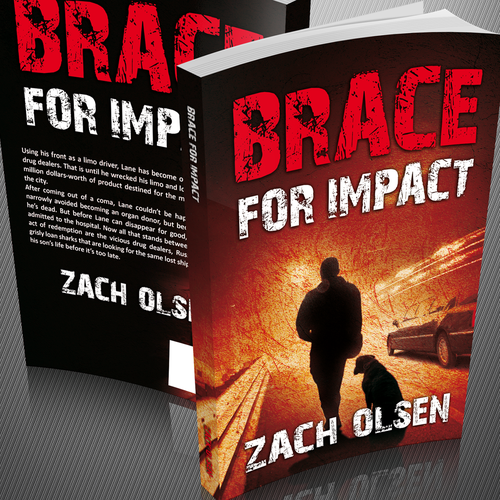 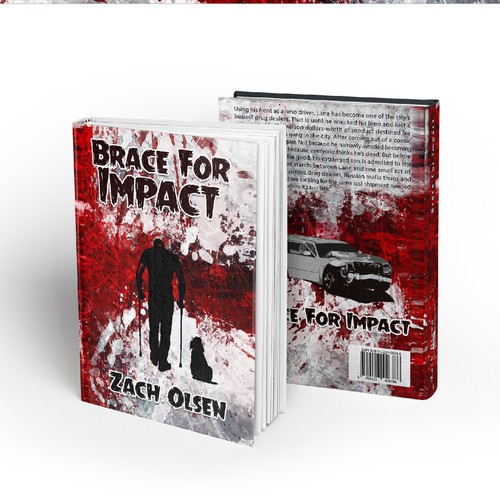 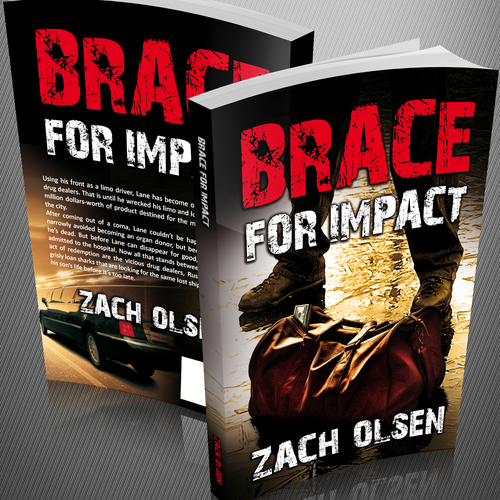 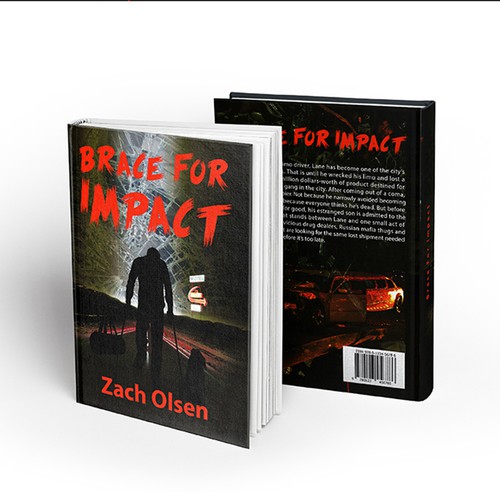 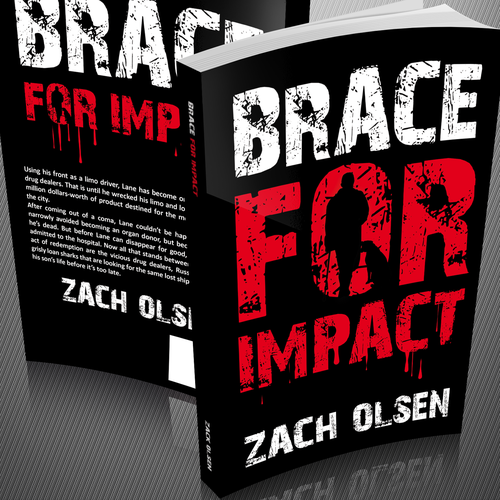 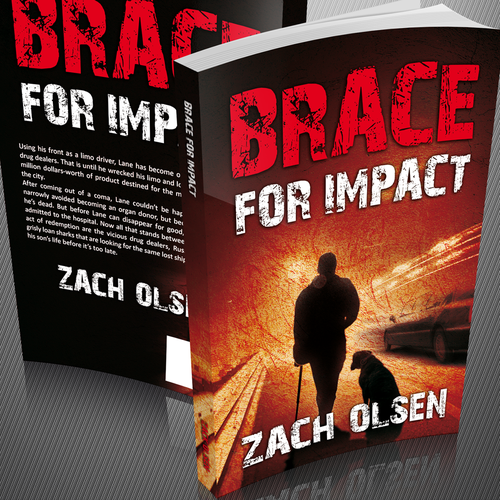 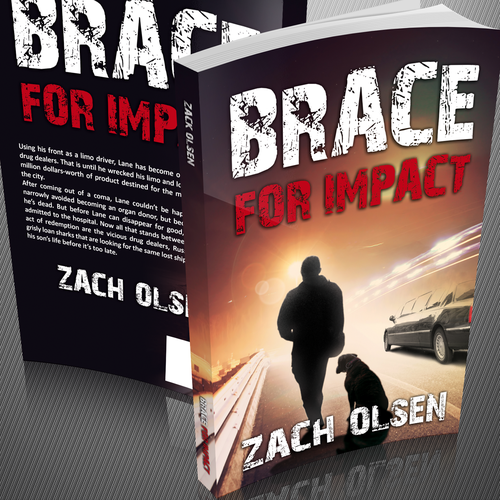 This is a novel.

The book is in the thriller/crime/mystery genre. The size of the cover needed is explained in the notes below and attached is the template. No author picture or bio is needed, just the title of the book (Brace For Impact), author name (Zach Olsen) and the synopses on the back - along with your super-cool design!

I've attached a PDF of book covers I like as well as some images (I don't have the rights to) that may help spark ideas.

Other themes/images from the book that can help with cover concept:
There is a car accident - so an image of a shattered windshield could work.
The story involves an underground black market ring of organ brokers.
A kidney is stolen in a motel bathroom.
The protagonist hobbles on crutches and is followed by a dog throughout the story - perhaps the black silhouette of the two of them would work.
A black duffel bag full of drugs serves as the McgGffin for all characters in the story
The protagonist is a limo driver - the silhouette of a limo on the back of the book might look good.
The protagonist wakes up in the hospital from a month-long coma.
Blood serves as an important symbol in the book - a blood bag might look good.

Other notes:
I would like a bold font for the title and author name on the front.
No pictures of actual people.
I prefer simple over elaborate.
Be creative!

Here is the synopses for the back of the book: Using his front as a limo driver, Lane has become one of the city’s busiest drug dealers. That is until he wrecked his limo and lost a shipment of half a million dollars-worth of product destined for the most dangerous gang in the city. After coming out of a coma, Lane couldn’t be happier. Not because he narrowly avoided becoming an organ donor, but because everyone thinks he’s dead. But before Lane can disappear for good, his estranged son is admitted to the hospital. Now all that stands between Lane and one small act of redemption are the vicious drug dealers, Russian mafia thugs and grisly loan sharks that are looking for the same lost shipment needed to save his son’s life before it’s too late.

From CreateSpace:
How to use your Template:
Open the PDF or PNG file for the Paperback Book Cover Template in your image editing software.
Create a new layer in your image editing software. This layer will serve as the design layer.
Design your cover in the design layer, using the template PDF or PNG file as the guide layer. The artwork should extend to the outside edge of the template's pink zone to ensure a white border will not exist within the printed work. Do not move the guide layer, as it is properly aligned for our printing specifications.
Ensure text and/or images that are intended to be read do not appear in the pink zones of the template.
The barcode area is indicated in yellow on the template. Do not place important images or text intending to be read in the barcode location. We suggest filling in this area with your background color or design.
Once your design is complete, you will need to turn off the guide layer so that it is not printed on your final product or rejected during the review process. If you are unable to turn off the guide layer, then you will need to format the artwork so that it completely covers the guide layer.
Flatten all layers, save the file as a press quality PDF, and upload the file through your CreateSpace account.

YA Romance cover
$199
Teen to adult
104
entries
27
デザイナー数
Book cover for non-fiction
199 $US
156
entries
13
designer graphistes
Looking for simple, elegant book cover design. Fantasy novel titled The Secret of the Moon.
US$ 399
All imaginative readers aged 16 and up.
99
entries
29
designers
Mind blowing cover for a business and money title (second book in series)
$ 199
Most people reading the book are experiencing some financial strain. These readers are seeking practical advice on rest
104
entries
20
Designer
Book Cover for WWII Historical Fiction
$ 399
People who like WWII and historical fiction
71
entries
21
Designer
Create a design Where seasons changing is evident
459 US$
Young adults 18-40.
195
entries
28
diseñadores