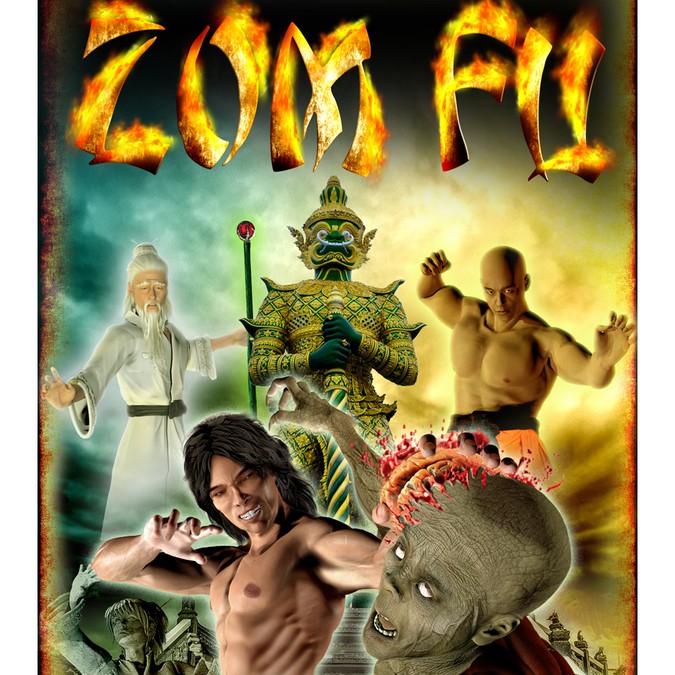 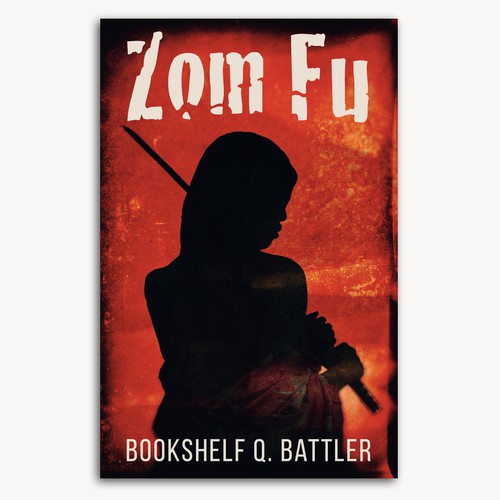 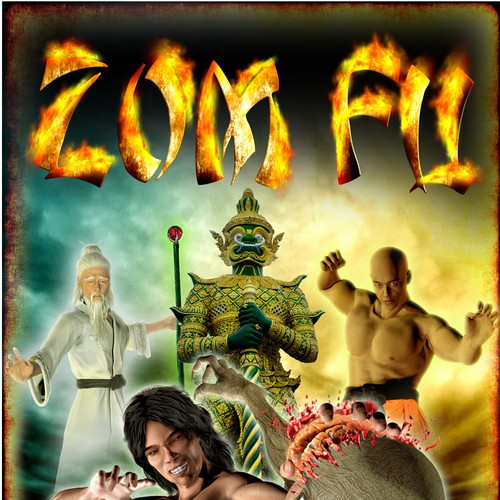 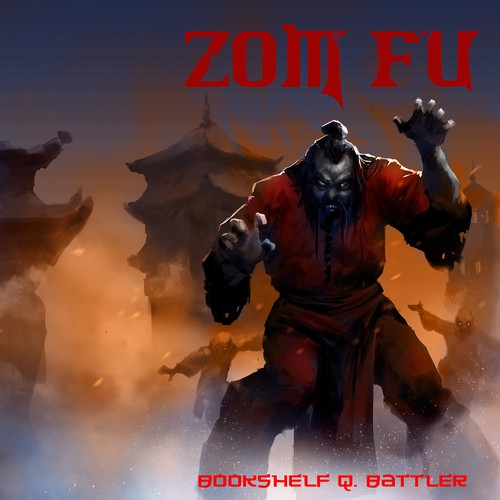 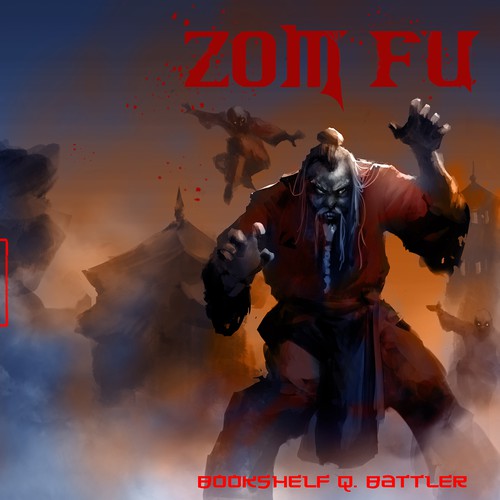 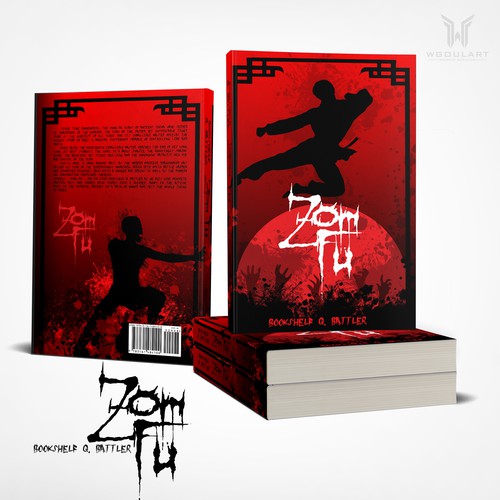 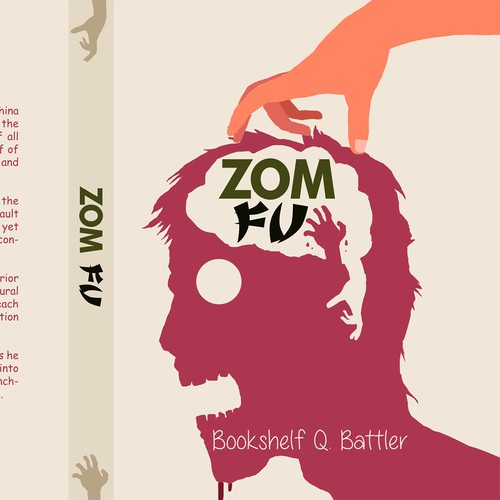 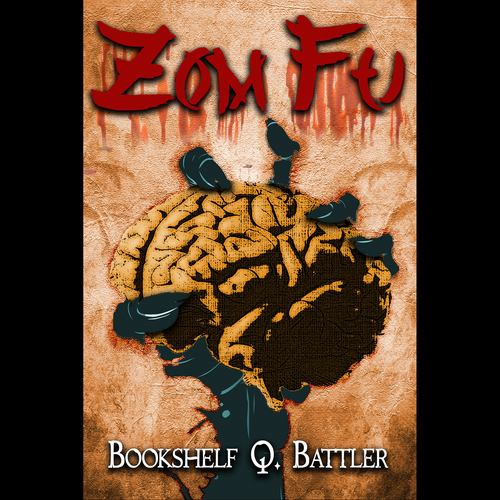 Bookshelf Q. Battler is a world renowned poindexter, epic nerdventurer, reviewer of pop cultural happenings and a champion yeti fighter. His blog, filled with zany tales regarding his life as a magic bookshelf owner can be found at bookshelfbattle.com

My book, "Zom Fu" is a horror/action story with a twist of humor.

The villain, Dragonhand, is a "Zom Fu" warrior, meaning he defeats his enemies with kung fu moves, then eats their brains. When he eats their brains, he gains all of the knowledge of kung fu his opponent once had, and thus, becomes stronger (i.e. he can do moves he couldn't do before but now he can because he learned them by eating his opponent's brains."

A blurb I have written about the book:

"Since time immemorial, the Kung Fu Clans of Ancient China have served as guardians of the Emperor. The Clan of the Sacred Yet Inscrutable Tiger Claw is the greatest of all clans, for its Infallible Master wields the mighty Staff of Ages, a magical instrument capable of controlling life and death.

When Yaozu, the Nineteenth Infallible Master, reaches the end of his long life, his best students, the loyal to a fault Junjie, the annoyingly smarmy Bohai, the beautiful yet silent Mei-Ling and the humongous fatalist Niu vye for control of the clan.

They'll have to make amends fast, as the undead warrior Dragonhand has filled his Clan of the Terrifyingly Unnatural Brain Bite with battle hardened zombified fighters, each with a hunger for brains as well as the powerful information contained therein."

Zombies + Kung Fu = Zom Fu! Join Bookshelf Q. Battler as he puts your favorite martial arts and zombie film tropes into a blender, dumps in the action, pours in the suspense, pinches in a dash of humor and sets the whole thing to puree."

Junjie - Handsome, long hair - the hero of the story

Bohai - Handsome. Cocky. Goes between being good and evil throughout the book.

Niu - Enormous. Big, strong, bald. Fatalist. A hero but believes fate controls his life and there isn't much he can do to stop it.

Mei-Ling - Beautiful. Does not speak.

Note - Zombies are described as having blank eyes and gray faces in the book. I might be able to change the gray part (maybe green faces?) if you have a killer design but I'd like to keep the blank eyes.

My thoughts on the design:

TITLE AND AUTHOR - The title should read "Zom Fu" and then somewhere else on the cover, perhaps on the bottom, it should read, "Bookshelf Q. Battler"

LETTERING - Maybe the letters could look Asian? Maybe they could be on fire? Maybe something else? I don't know. You tell me what looks good in the design.

IMAGES: At the outset, what I really want is an attractive, eye catching design that will draw the reader in and make him want to buy my book.

I'm going to throw some ideas out, but know I'm not married to any of them and designers have pleasantly surprised me before by coming up with ideas I didn't have:

There is a move in the book called, "The Sacred Yet Inscrutable Tiger Claw." Basically, the person curls their fingers forward, making their hand look like a claw, then they jam it through an enemy's skull to snatch the brain.

The heroes snatch out zombie brains to stop the zombies. Dragon hand and his zombies snatch out human brains and then eat them to gain the knowledge in the brain.

Maybe just a hand positioned like a tiger claw grabbing a brain?

I'm kind of a minimalist and I think sometimes covers get really crowded with too much going on, so ultimately what I hope for is a) eye catching b) something that lets the reader know this book will involve zombies and kung fu.

I'm still working on the book, but if you'd like to check out the chapters I have written so far for ideas:

I'm new to this so I will no doubt have questions and need someone who doesn't mind answering them. I may not get the book published until later this year so if the cover somehow needs some tweaking I'll need someone who will be able to help and answer questions later.

Eventually, I would like to turn this into a print book but I will worry about the ebook for now.

Zombies + Kung Fu = Zom Fu - give me your best! (And remember, I'm not tied to any of the ideas above. I just mention them to get you going. In the end I need awesomeness and a reflection of the book being about zombies and kung fu.

Note - below I put Amazon Kindle and I do need that but also other ebook formats.

I put a 99 dollar cap on stock but I could probably go up to 200 if you have something awesome in mind. Free stock is preferable but I can dip into paid stock a bit if your design is super awesome. If it's all the same, free stock is preferred.

A NOTE ON THE ZOMBIES - in my book they are described as being gray but I'm not necessarily tied to that. If they look gray in your cover idea then great if not I can work with it. I essentially picture Walking Dead style zombies except they are Ancient Chinese zombies. So they'd be Asian zombies with ancient Chinese clothing.

I need a reader to be attracted to the design so he wants to buy it and to also know the book is about zombies and kung fu.

Sometimes I think covers don't look good when they are too busy...when there are 900 things happening in a drawing. I feel like the reader will probably spend five seconds in the Amazon store deciding whether to buy the book so it needs to pop.