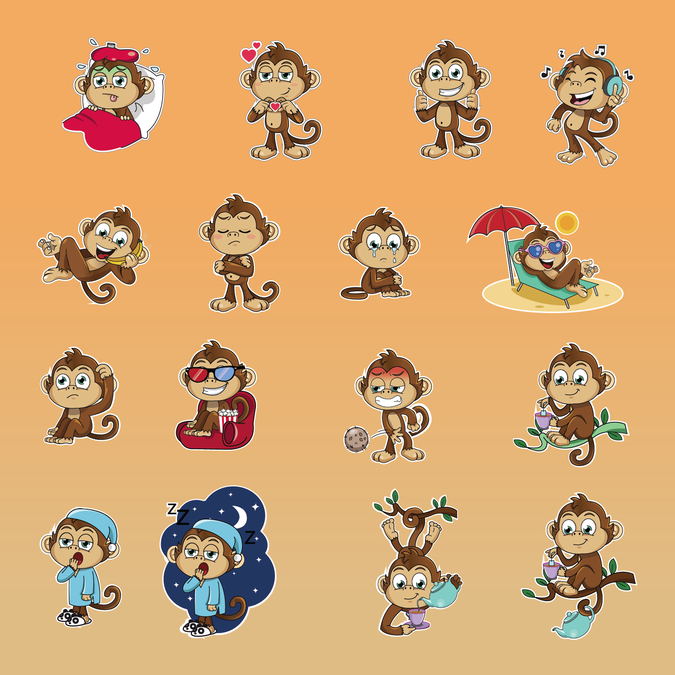 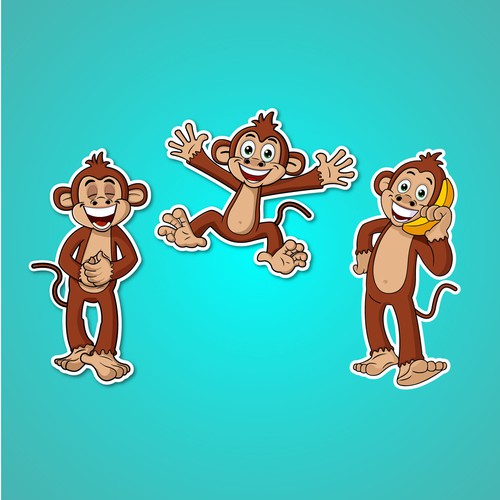 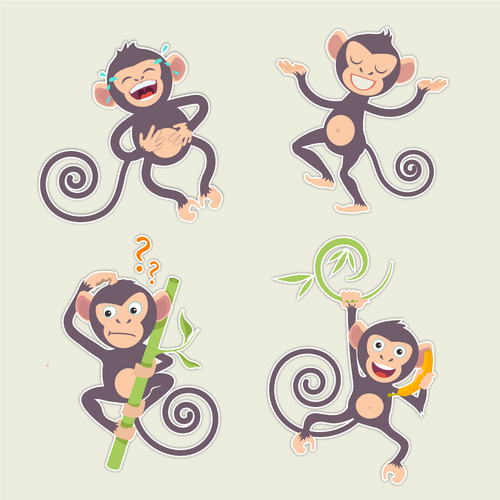 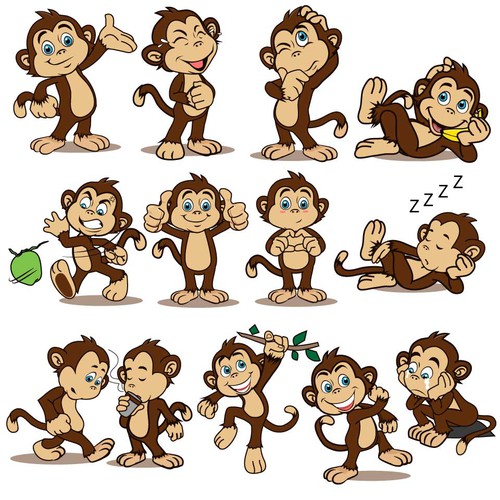 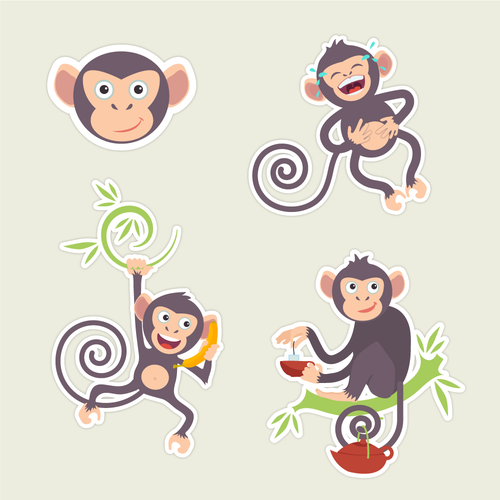 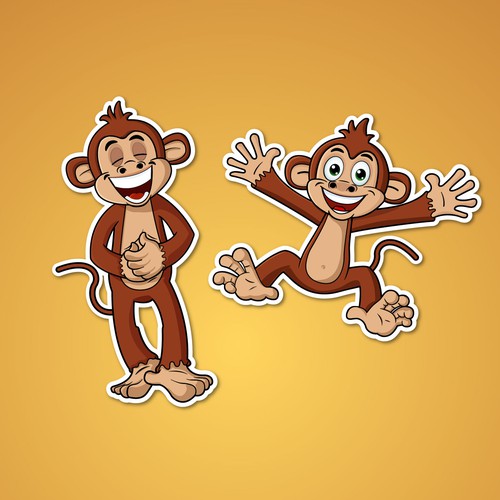 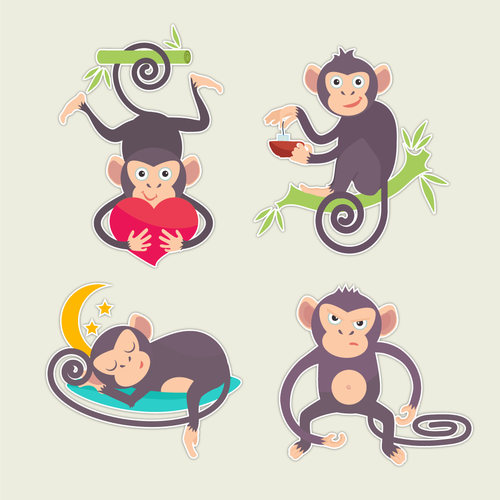 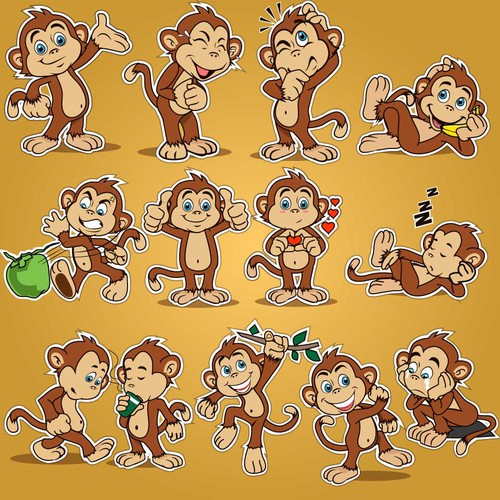 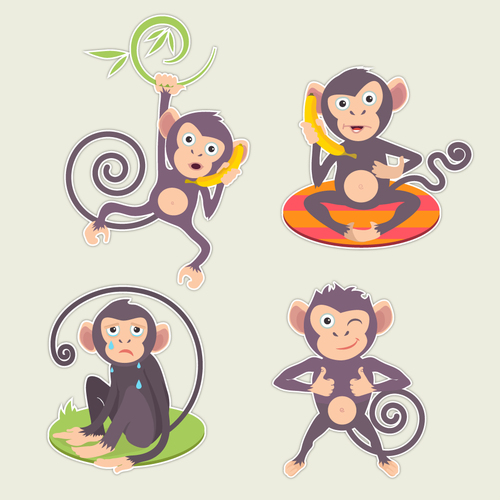 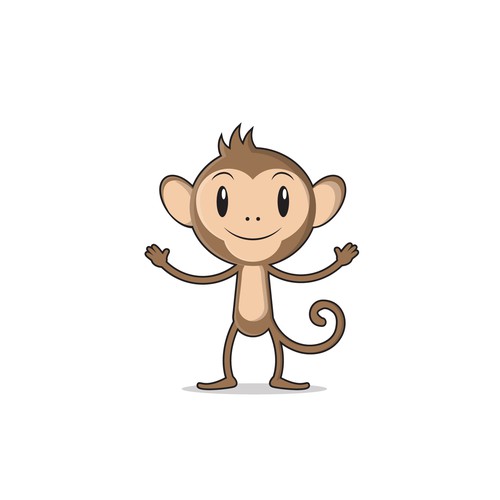 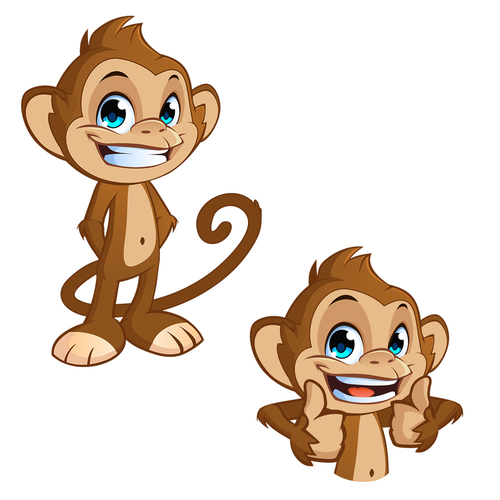 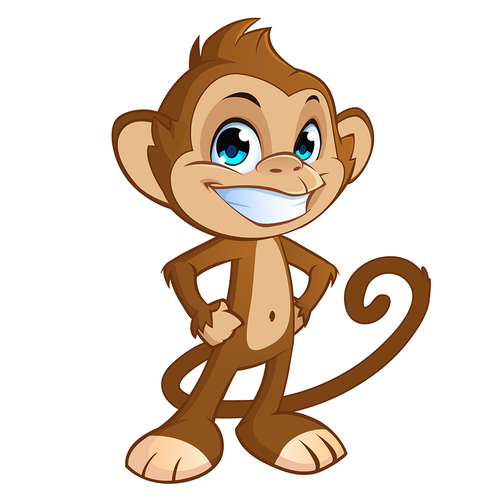 I would like a set of 12 "stickers" pack illustrations of a monkey character, in various situations/attitudes, being cute and/or funny. Think reaction stickers for message apps type of thing. These are meant to be reactions in a conversation and to convey a feeling or emotions like sadness, happiness, etc. - please see notes section for specifics.

Format needs to be vector (ideally) or 408x408px (or bigger) with transparent background.

I'd like the monkey to resemble a cute yet slightly cheeky character. As a general direction, it should look quite similar to the iOS emoji monkey (🐵🐒, demo attached) but with a full body of course. I have suggestions for the 12 different designs (below) but feel free to mix in your own ideas if you like to as long as they are fun and suitable for a sticker pack that also may be used by infants.

I'd like the monkey to resemble a cute yet slightly cheeky character. Ideally, it would look a lot like the iOS emoji monkey (🐵🐒, demo attached) but of course with a full body.

The 12 stickers you need to create should reflect different emotions that are useful in a chat conversation. I have several suggestions (following), but feel free to mix in your own if you like as long as they are suitable for a sticker pack also used by infants!

Create office superhero character illustrations for VIP program for EventBoard
$499
Target audience is IT, HR, Operations executives. The product is a VIP program that we are creating a theme/brand aro...
36
entries
19
designers
Create an amazing brand character for a new startup SaaS company
US$299
We help entrepenuers, marketers and business owners across the globe automate their Facebook advertising efforts so t...
10
entries
5
designers
Create a fun Whale-Mascot for my Website about Mobile Phones
€ 829
My website gives honest advice on how and where to find the best mobile phone contract. The audience: mostly beginner...
121
entries
62
designers
We are lookingfour a design for our Elfie
$349
lookingfour is a marketplace where buyers post the products they need and get offers from interested sellers. target ...
68
entries
39
designers
Google needs character design for app development team.
€829
We are Google's "AppDev" team. Our mission is to help mobile app developers grow with Google’s marketing and analytic...
140
entries
52
designers
Cool looking Zebra mascot for the WordPress community
US$ 549
Admin Columns is a plugin for WordPress. It enhances the admin by adding columns and helps you save time editing your...
185
entries
79
diseñadores