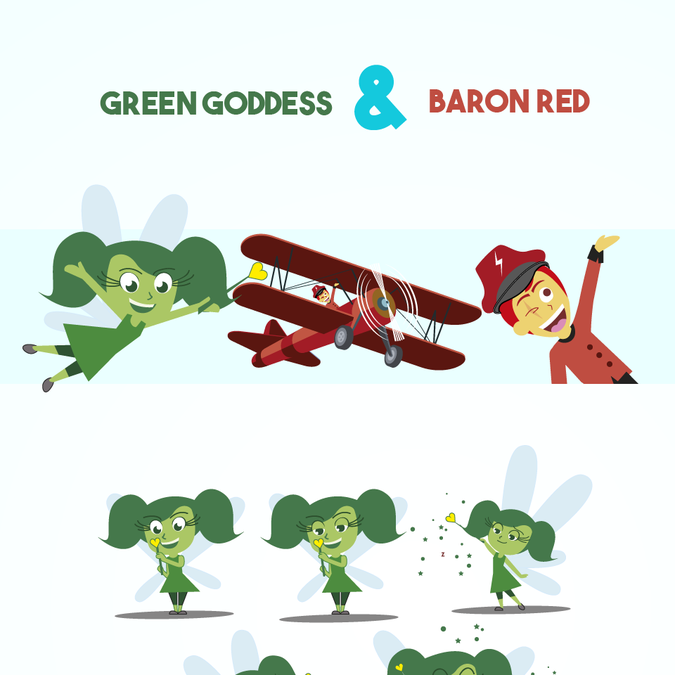 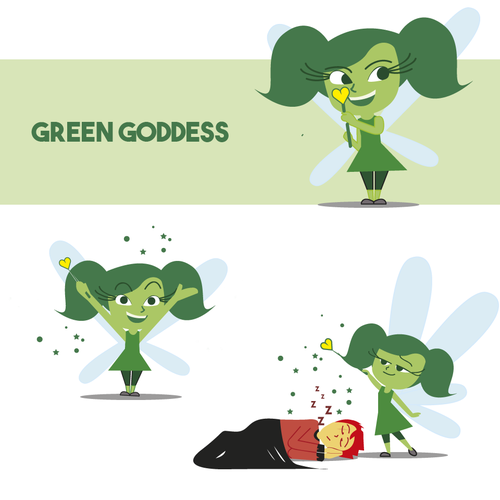 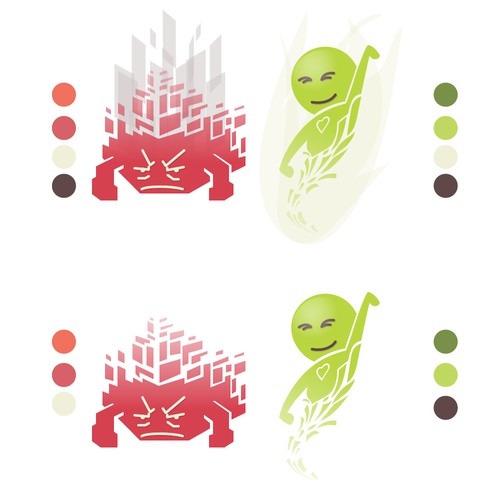 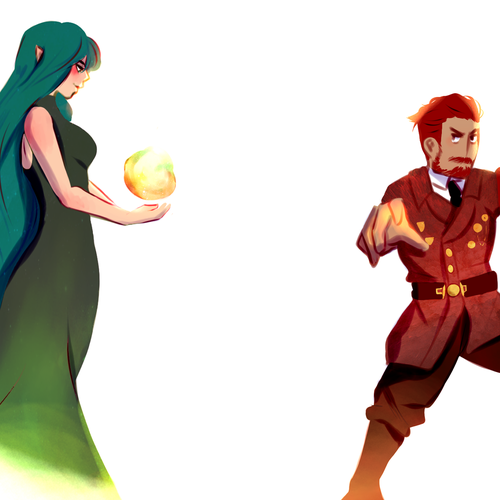 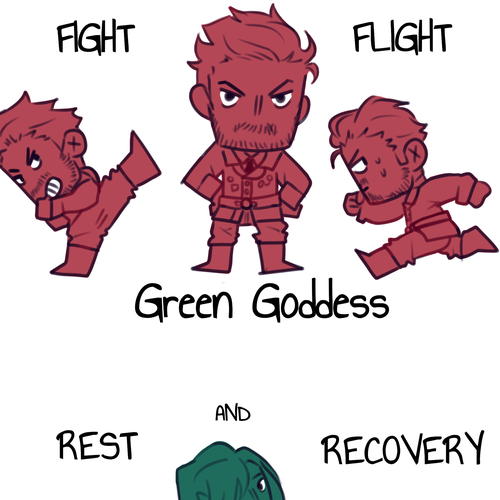 Carlyle started out as a sports chiropractor and performance coach to professional skiers and cyclists. His clients are multiple Olympians. They are resilient. After setting up his private practice on Harley St he started attracting busy professionals looking to solve chronic problems.
15 years later and his company Prohab Performance delivers a signature programme, the Ultimate Wellness Journey (UWJ). The UWJ is a state-of-the-art bespoke assessment and design process that produces a comprehensive functional health plan. His elite team of nutritionists, health coaches, private chefs, personal trainers and wellness experts help his members implement their plan for life.
The result is a personal transformation.

I need two characters/mascots created to visually bring to life our concept of the Red Baron and the Green Goddess.

Imagine your hunter-gatherer ancestor going about their business hunting and gathering, and a saber-tooth tiger suddenly appears. There is a little part of our brain, about the size a walnut called the amygdala that in most of us would immediately recognize the tiger as a threat to our survival. Instantly a set of chemicals, hormone’s and sugar is dumped into the body to do either fighting or flighting. More specifically the hormonal cascade results in the secretion of adrenaline, norepinephrine, andcortisol. Thisresponseisrecognizedasthefirststageofageneraladaptationsyndromethatregulatesstressresponses among vertebrates and other organisms. Why it’s called a ‘syndrome,' I will never know. It’s normal.
Adrenaline, norepinephrine is dumped instantly so that within seconds you are more awake and focused. That explains the running feeling I had. They also rapidly shift blood away from your gut, and into the big muscles of the body that will power you fighting or flighting and power up sugar metabolism, so you have instant access to energy. Cortisol comes little later (minutes) and takes care of things like fluid balance, blood pressure and keeps non-essential things like reproduction and immunity protected at that moment.

Once safely away from the danger, the hormone spike should now slowly come down, and we return to a balanced physiology. It’s an emergency energy system designed for emergencies.
I am describing your sympathetic nervous system. It is a subdivision of your autonomic nervous system (ANS). Think of the ANS as the chief controller of everything you never feel. Things like breathing, digestion, blood pressure regulation, hormone balance and immunity to name a few. The ANS has another sub-system called the parasympathetic which does the opposite of flight or flight.
The medical terms have always confused my clients, so I prefer to use characters and colours. The character for me that most epitomize the sympathetic system is the Red Baron. Manfred Albrecht Freiherr von Richthofen, also widely known as the Red Baron, was a Polish-German fighter pilot with the Imperial German Army Air Service during the First World War. He was credited with 80 kills and was regarded as the greatest ace of his time.
Now when the Red Baron was flying he was not doodling around sightseeing, he was a man of action. The result of the action was death and injury to the enemy. When we fly the Red Baron in our body, like I was when that bus took off without me, the result at the cellular level is similarly catastrophic. The medical term is catabolism. Catabolism is the set of metabolic pathways that break down bigger molecules into smaller units to release energy. Flying the Red Baron is about spending resources. When we fly the Red Baron, it should be a short, intense burst, which releases energy quickly. Much like the Red Baron cannot fly all day, he must re-fuel and reload his weapon, our body cannot do intense catabolism all day. It’s important to note that by-products of catabolism are acidic forming and inflammation-promoting, that is to say, the result of flying the Red Baron at a cell level is like having an acute injury that is hot and swollen but spread through the whole body.
The most important thing to note about flying the Reb Baron is that in most cases you won’t feel it. The chemistry is all about action and action NOW, not about feeling. Flying the Red Baron is a regular part of your body, but by design, it should only be for short, intense bursts.
At the other end of the spectrum is what I call the Green Goddess. The parasympathetic system. When the Green Goddess is running the show, the body is on re-building, replenishing, detoxifying and in recovery mode. If the Reb Baron is ‘fight, flight or freeze’ the Green Goddess is rest, recovery and restore. The Green Goddess puts resource back in re-charges and revives us. She is in full swing during the night. The Reb Baron rules the day.

Every day we make and spend energy or use and recharge our battery. In the 24-hour cycle of a day, there are processes in the body that will build energy and others that will deplete. Many factors contribute to the creation and usage of energy. Just to breathe requires energy. Walking requires energy. Digestion of food requires energy. Thinking requires energy. Our body is expertly creating and using energy every second. Now let’s imagine a simple balance sheet, one represents The cost of flying the Red Baron the other the revenue the Green Goddess puts back in. We are well equipped to get through a day, a week a month even year over-spending our energy system. There does come the point where this energy ‘debt’ starts to impact other systems.

Can I please emphasis these two characters need to be clean and simply.

Character for head lice product for children
US$499
Simple Science is a lifestyle and healthcare company specializing in functional foods of different forms, including t...
31
entries
17
designers
create an apothecary elephant, a pharmaphant
€829
We are a pharmacy with two stores in Tübingen, Germany. For us a pharmacy isn't just a place where people pick up med...
101
entries
36
designers
Data Super Hero
799 US$
Our organization, Insulet Corporation, produces the Omnipod- tubeless diabetes pump. This design of a superhero is fo...
76
entries
28
designers
Nurse character for "Pflegeberatung vor Ort" needed!
€829
Großhandel und Dienstleister für medizinische Fachhändler...
78
entries
47
designers
Griffen/Greif
€513
-Drugstore/ Pharmacy shop -Everyone from a child to a granny -Need a fresh exciting and lovely griffen image...
113
entries
50
designers
Create a modern/friendly robot assistant
399 US$
We built AVA - an Automated Virtual Assistant - that helps dental offices reconnect with their patients. Ava follows up
139
entries
40
designers