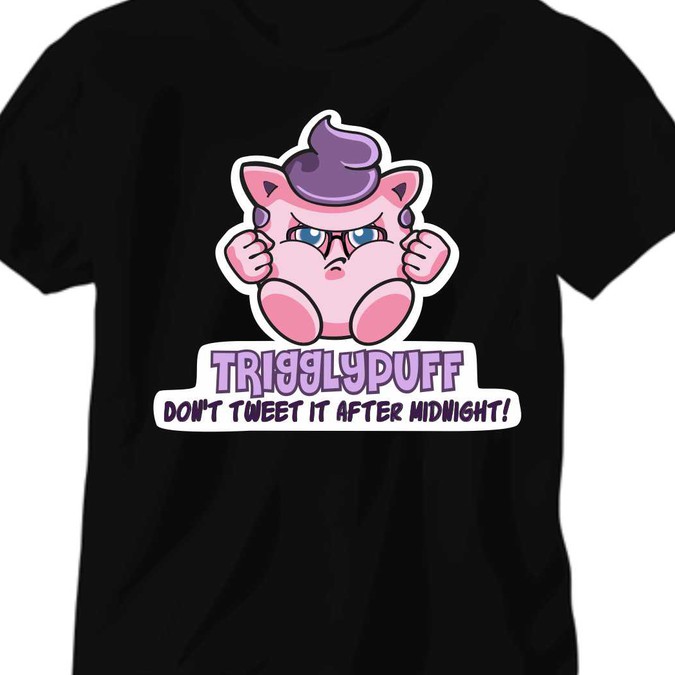 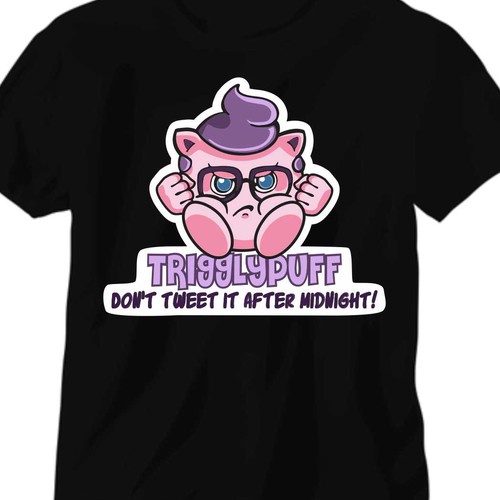 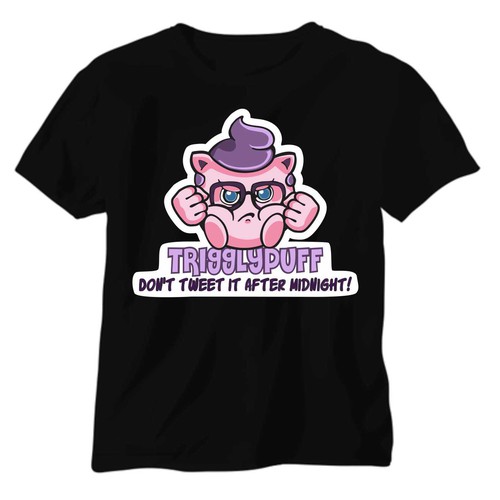 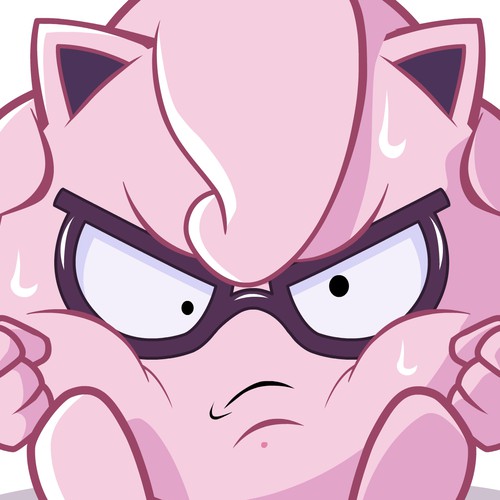 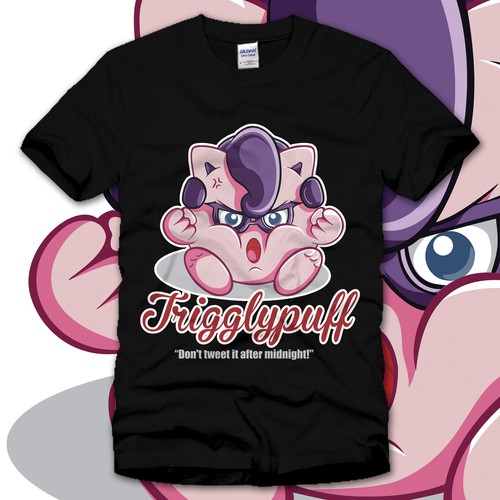 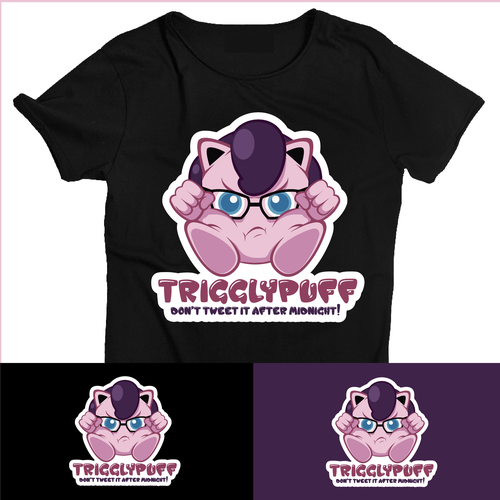 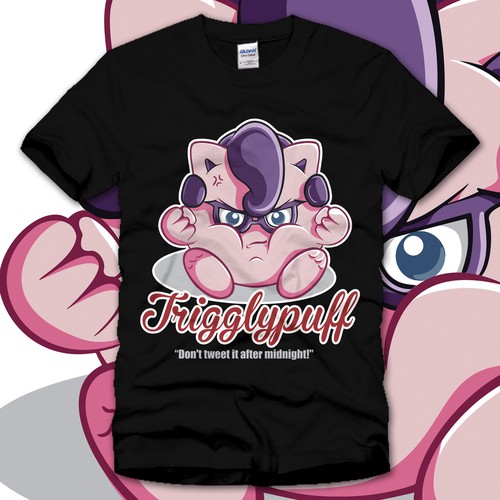 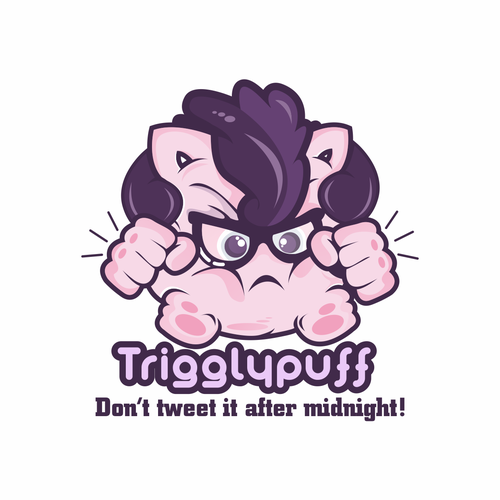 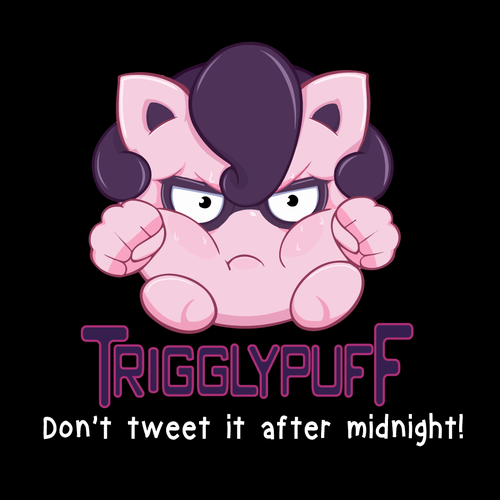 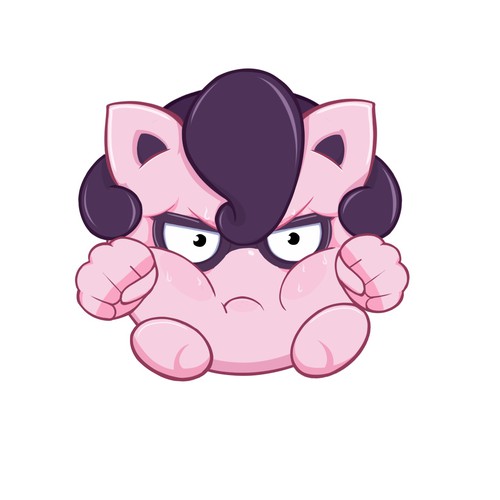 The character illustration is of a meme that is currently circulating. The meme is a satirical combination of the following:

The meme is called Trigglypuff and one random example is shown here: https://pbs.twimg.com/profile_image…1TLutV.jpg

The goal here is to create a version of that meme for use on a t-shirt.

For the shirt graphic I'd like a version of Trigglypuff that looks very similar to the Pokemon image above, with the following alterations:

- Faces directly at the viewer

- Feet flipped up like Trigglypuff is sitting on the floor

- Instead of flippers, I'd like for Trigglypuff to have clenched fists

- The whole character's body should be the same color, but should be illustrated in such a way that the hair can have its color changed later if needed

- Shading can be provided in a two-tone format, but please no gradient shading

Below the character should be a title that reads "Trigglypuff".

Below the title should be a caption in smaller font that reads "Don't tweet it after midnight!"

Please use your judgement to select a font that matches the satirical nature of the design.

Comienza ahora
Portland Tech Company seeks "cute monitor lizard"-inspired mascot
US$ 1.399
Sensu is an infrastructure and application monitoring solution for medium to large size companies.
112
entries
43
designers
Cool "Pickle" Mascot Character Design for New Game
$ 349
We are in need of character design to create a PICKLE mascot for a new playing card game. The target audience of the ga
78
entries
42
Designer
Robot Character/Mascot for Refer-A-Bot Company
CA$729
Our company plans to develop a software that allows customers to refer other customers to businesses or stores in exchan
144
entries
59
デザイナー数
Chibis and Boho for kids and Pets
899 US$
Currently Engrave my work on metal. Goal is to engrave and print ideas on different products from kids Apparel, Wall Art
58
entries
13
designers
Duck Yeah! - Duck for F-ck Duck Character - We want to see YOUR interpretation of our duck!!
US$ 549
‘Duck’ rhymes with ‘Fuck’ We are creating the 'Duck for Fuck' character to place with words and phrases on T-shirts....
305
entries
90
designers
animal or animal character to best represent our company branding
US$ 349
Dry cleaning, laundry, alterations, wash and fold,
129
entries
52
designers
Más información sobre diseño de personaje o mascota
Vea como funciona