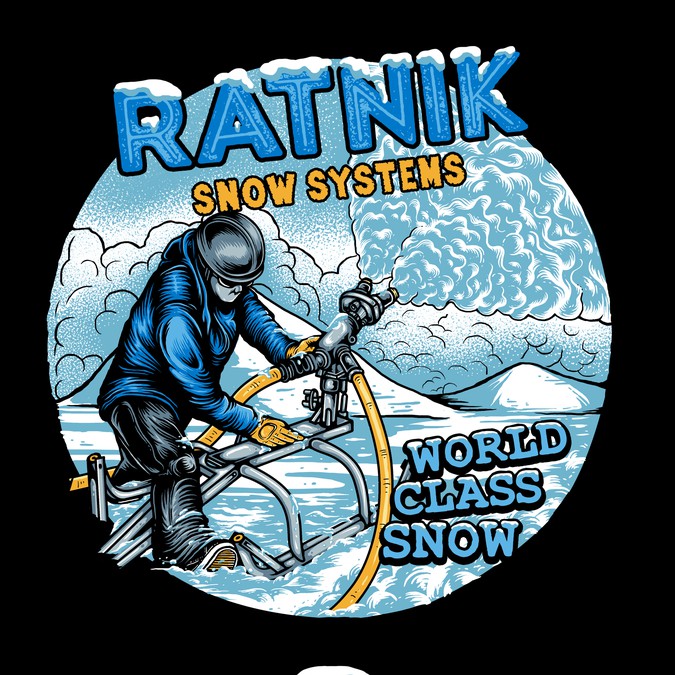 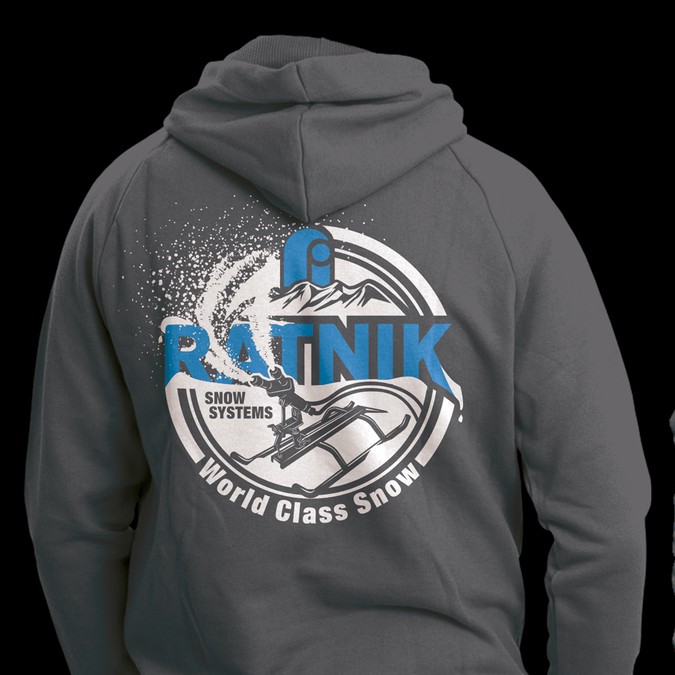 Design a hipster hoodie for a snowmaking company ! 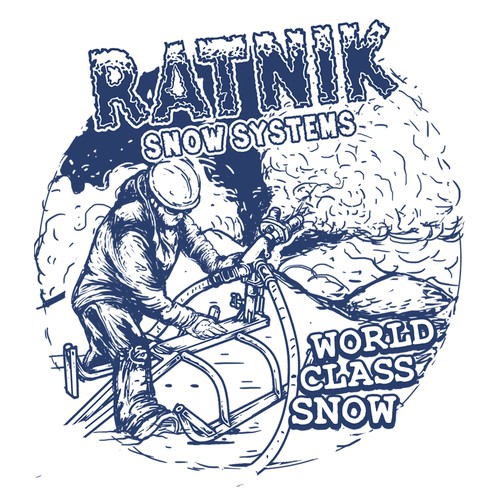 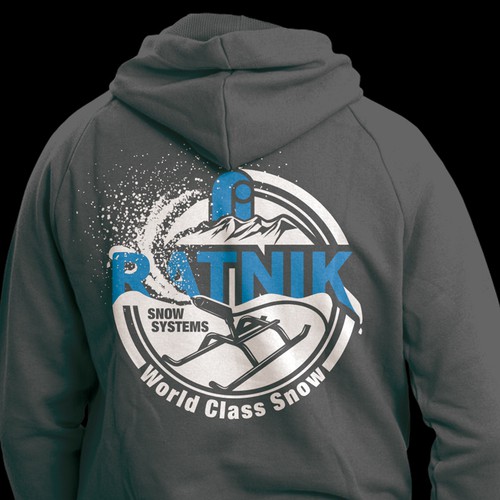 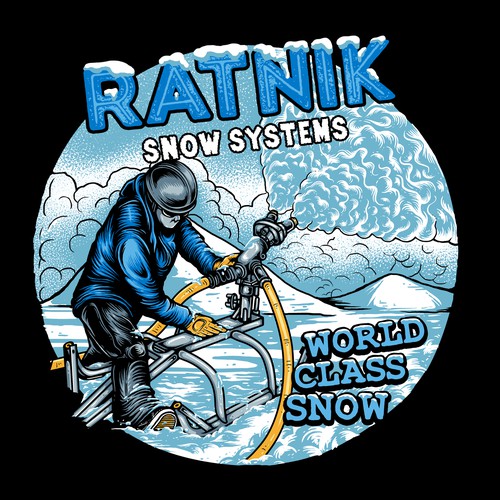 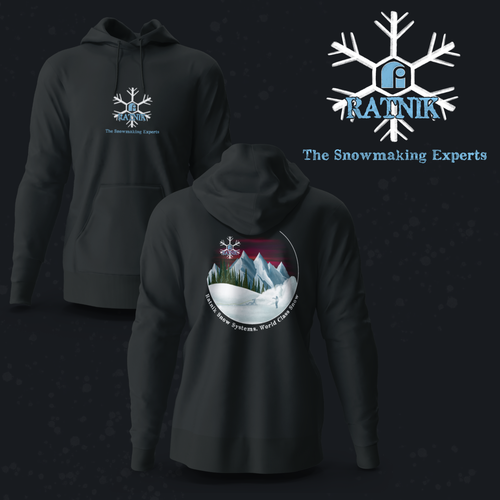 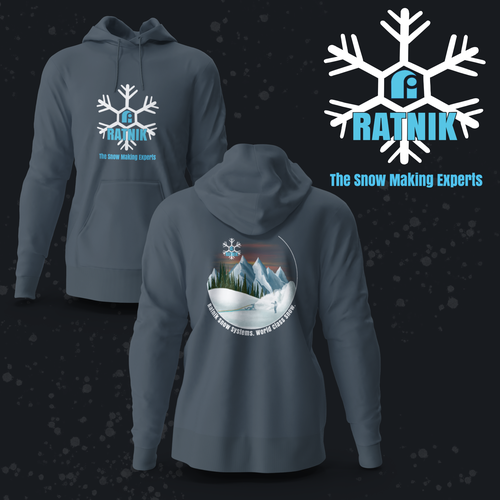 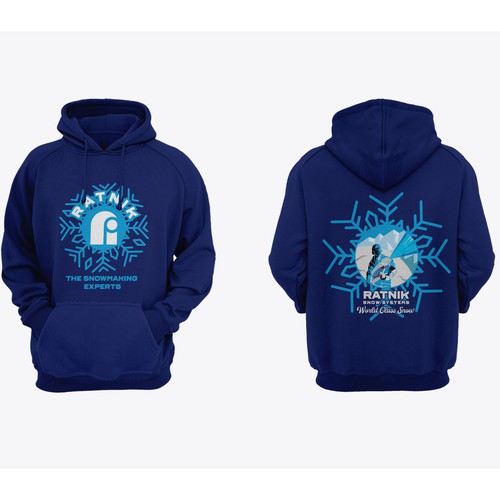 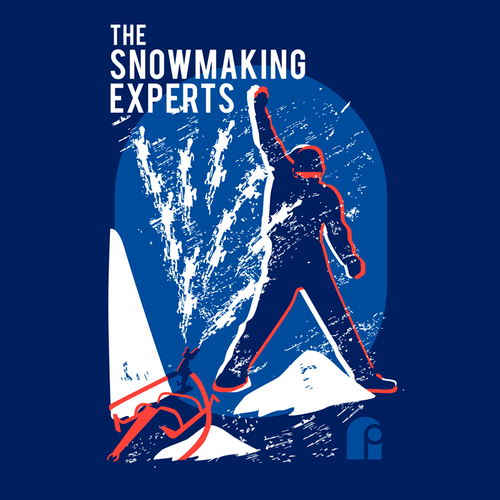 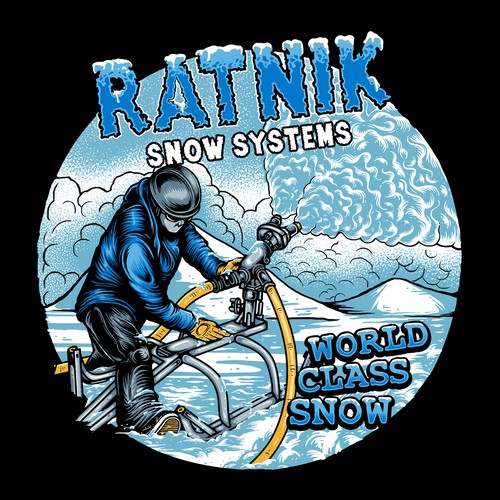 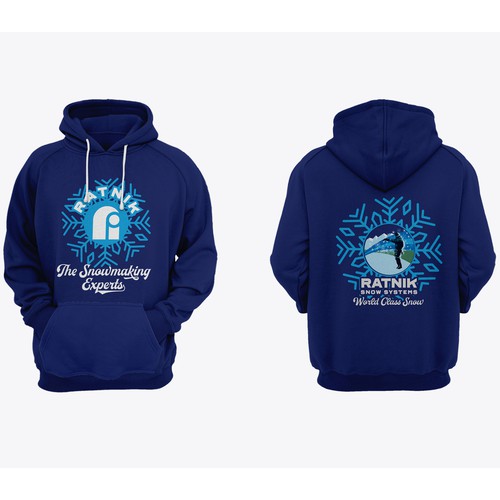 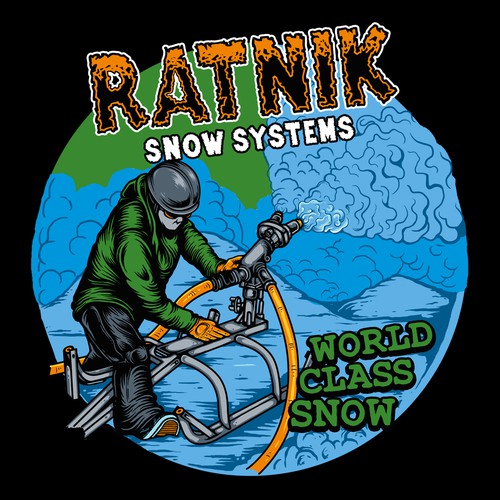 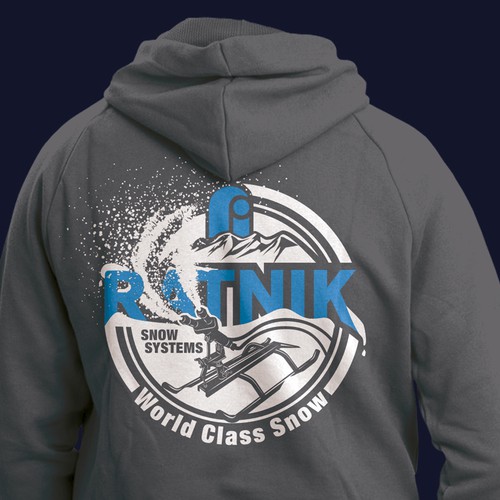 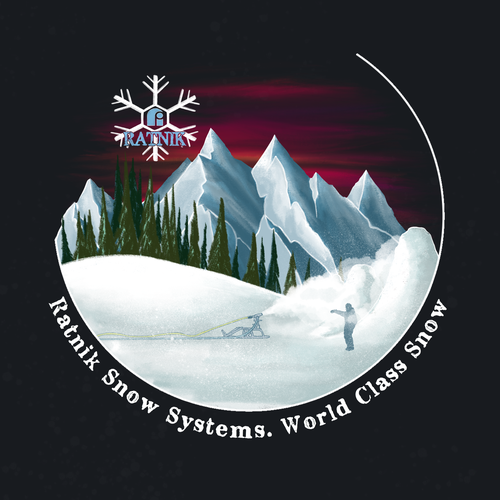 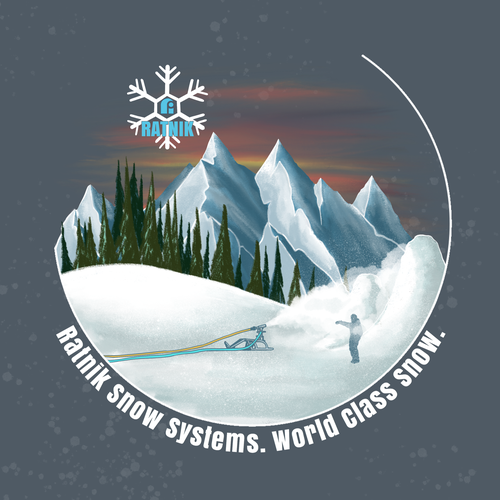 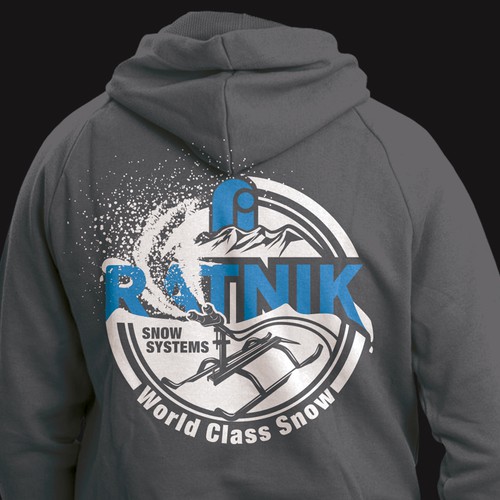 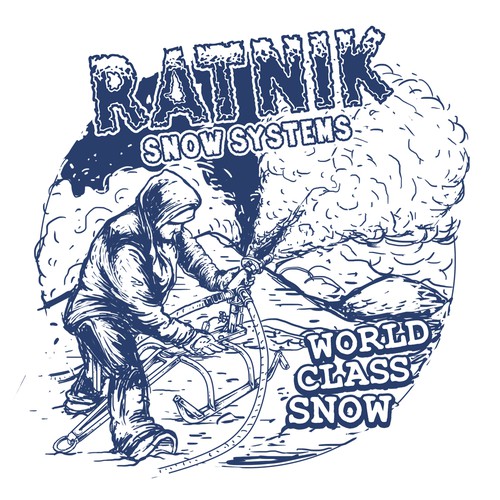 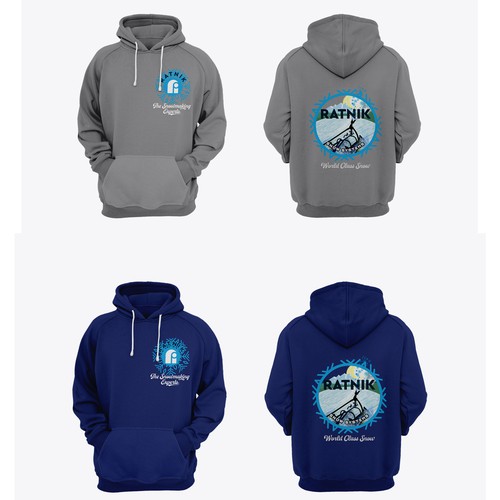 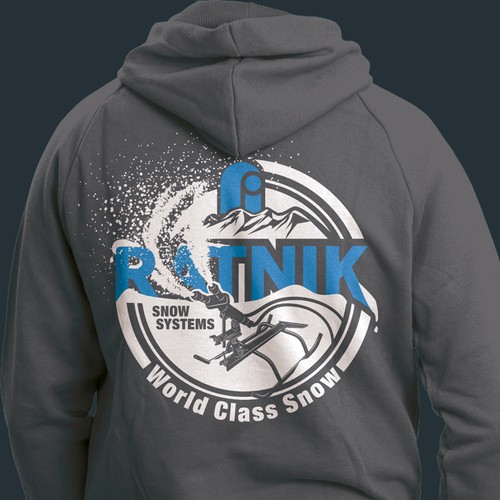 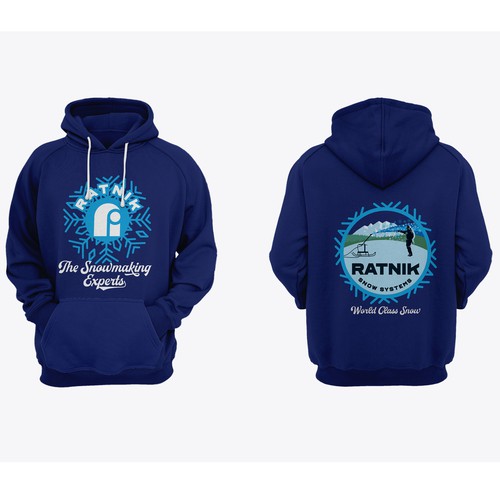 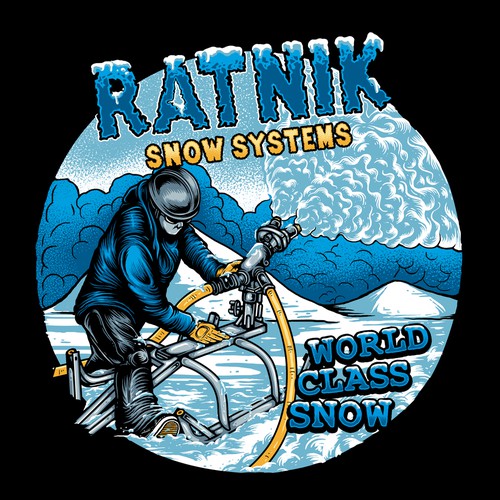 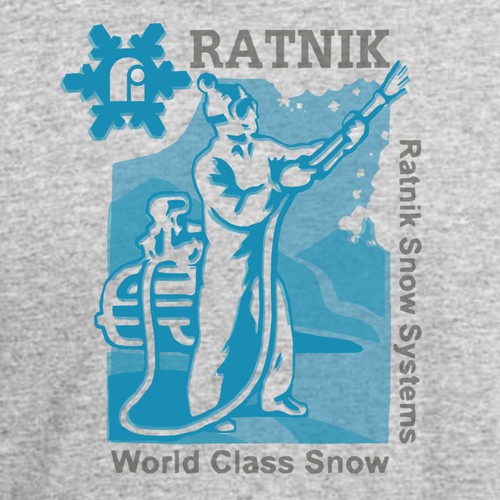 Hello!
We are a small, family owned business that designs and manufactures snowmaking equipment “snow guns” for ski areas all over the world. We have been in business for over 55 years and have supplied snow guns for the Winter Olympics since 1980. If it weren’t for snowmaking, ski areas would be out of business! They can’t rely on Mother Nature for snow. Our snow guns cover the ski slopes with snow (which is a combination of compressed air and water to make the snow particles).

We need a new, fresh and hip design for our hoodies. We give these hoodies to our customers as gifts. Our customers are snowmakers, the men ( and some women too!) who are out on the mountain positioning all the snow guns to make snow. They work hard, long hours (mostly in the middle of the night) in very cold weather. They love any ‘swag’ they can get, especially hoodies, as they keep them warm in the cold winter months, and they love showing off our brand. Our snow guns are known to last forever. They are built extremely well. Some ski areas are still using our snow guns that are 30+ years old!

Our current hoodie is navy blue, but we are open to new colors. We would like our logo on the front of the hoodie. Usually we have the logo, then ‘RATNIK’ written next to it, and then ‘The Snowmaking Experts’ written below it. See attached examples. You are open to change the style of this, but we do still need the described criteria.

On the back of the hoodie, we would like to have an illustration/image of a snow gun in action (with snow coming out of the gun). Then, a man (which would be a snowmaker), next to the snow gun, testing the snow quality. The snow that he would be testing would be falling from the snow plume. See attached images that display this. Also, with snowmaking, one way to brag about your snow guns is to have huge piles of snow in front of the snow gun. This shows that your snow gun makes TONS of snow. On our current hoodies, we have the words “Ratnik Snow Systems. World Class Snow”. See attached. These words are still applicable.

I have attached old images that might be useful – such as the old hoodie design, an old t-shirt design (if someone wants to make the design cartoon-like, go for it! It would be fun to see it this way too). I have also attached logos. I do like the idea of our logo captured within a snowflake. It would be nice if the design also had mountains, etc. in the background, to make it feel like you are at a ski area. Please reach out with any questions!

UPDATE: Hello! In the images provided, I have provided an old t shirt design of a snowmaker holding the snow gun in his arms. I provided this image as an example of a cartoon-like design, if someone wanted to make the design to seem cartoon-like. Please note we do not want to go in the direction of a design with a snowmaker holding the gun again. (since this is not how they make snow) I am sorry for not mentioning this. We would like the snow gun to be on the ground with the sled, as in the pictures provided. Thank you!!

Sweatshirt Hoodie. With hood, no zipper in front.
We will give them to our customers, who are snowmakers, as gifts or 'Swag' as they say.

Logo on the front of the hoodie, design on the back.

I can't think of anything at this time

Design a hat to be sold on 30A!
199 $US
meshback, weathered hat
21
entries
7
designer graphistes
Gym Wear - Sweatshirt/Hoodie
$ 299
Gym wear and casual wear
104
entries
11
Designer
Fun Company looking for Fun Christmas Shirt
199 $
Our STAR (Something To Always Remember) Christmas shirts are worn by our employees and select families during a day of a
95
entries
15
Designer
Badass T-shirt Design For The Rugged, Bearded Man
199 $US
Black t-shirt for a Badass Man. Keep in mind that the design will be screen printed onto a heat transfer sheet and then
41
entries
20
designer graphistes
Design a jersey for a Professional Darts Player
USD 199
A jersey for a professional darts player.
11
entries
4
diseñadores
Bakery Fashion Design
€ 449
Workwear used in the Shops for the sales staff. Mainly T-Shirt, Sweat-Shirt, Polo and Softshell jacket.
42
entries
10
designers

Comienza ahora
Labrador Retriever Dog inspired Leggings/T-shirt design
499 USD
50
entries
13
designer
Oddball Hoodie Contest
US$ 199
i like to create a new line called" Oddball " it will be a street style brand , i would love to create a brand that insp
142
entries
19
diseñadores
Help design a new lifestyle brand
499 US$
Shirts for sale online.
27
entries
9
diseñadores
Custom bike kit (jersey and pants)
US$ 499
I am going to be riding with some friends in the AIDS Lifecycle ride from San Francisco to Los Angeles in June of this y
36
entries
9
designers
Cartoon/caricature face for bachelor party socks
USD 299
These socks are for my friend Niels' bachelor party. Every attendee will get a pair. The idea is that the caricature fac
97
entries
35
diseñadores
Blue Claw Brawlers
US$499
Baseball uniform which includes: hat, jersey and practice shirt
35
entries
11
diseñadores
Más información sobre diseño de ropa
Vea como funciona