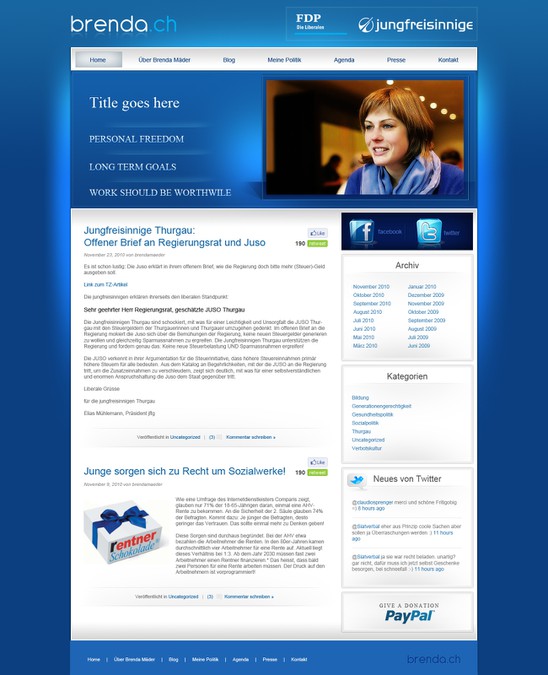 Wordpress-Template for a young swiss politician and her campaign 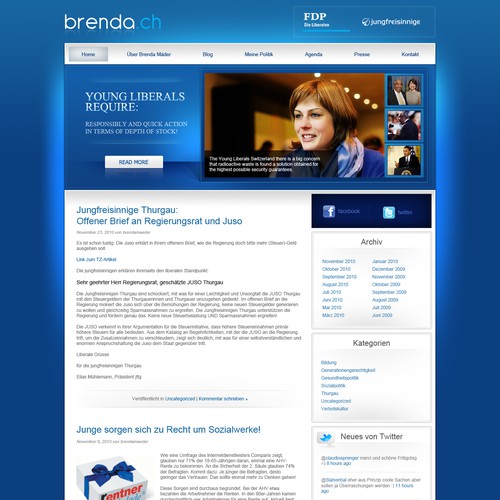 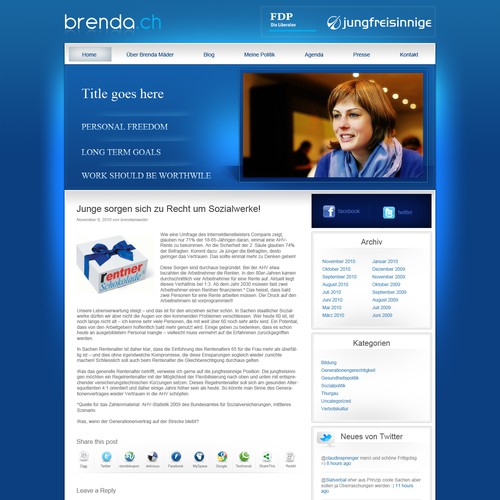 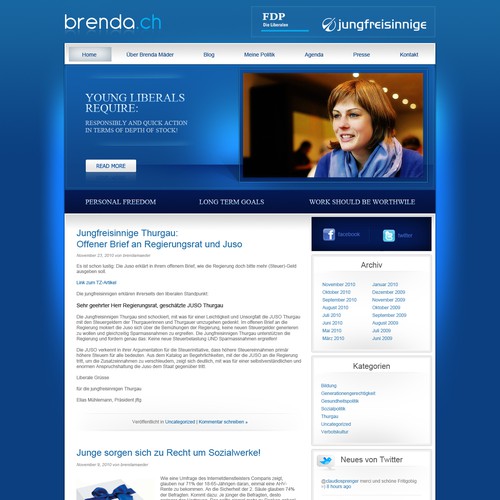 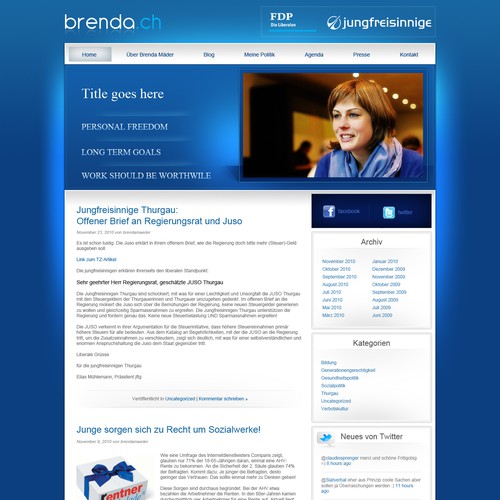 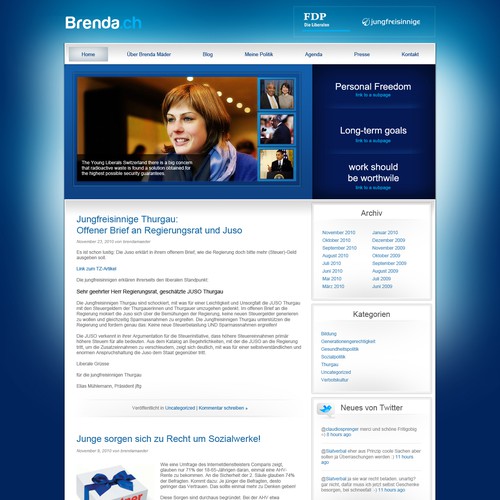 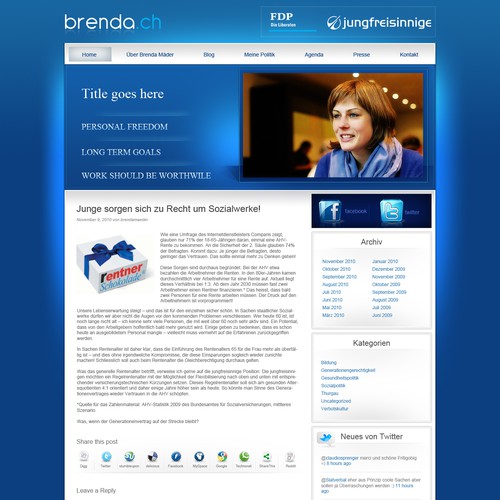 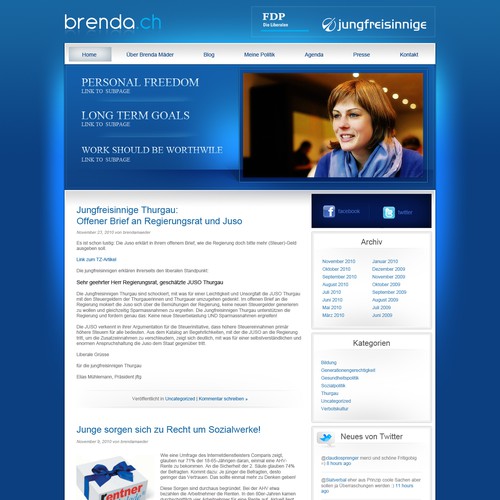 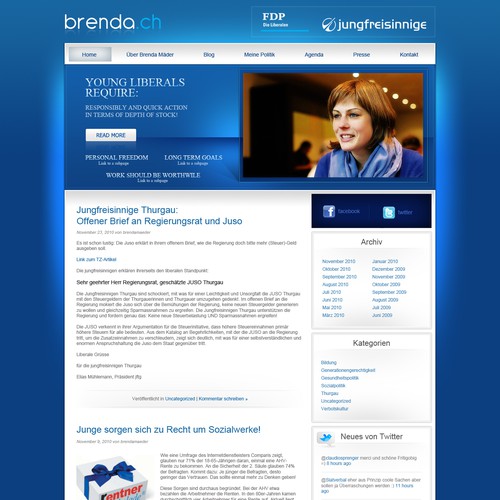 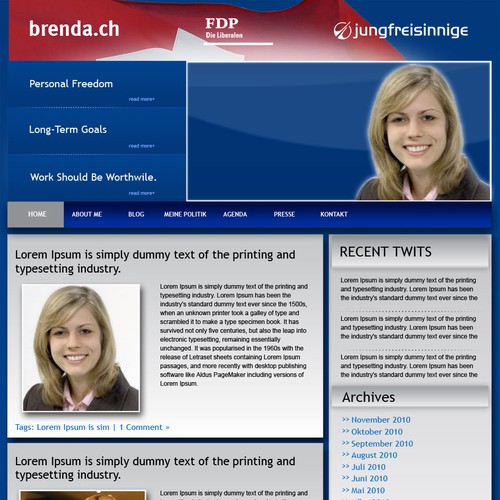 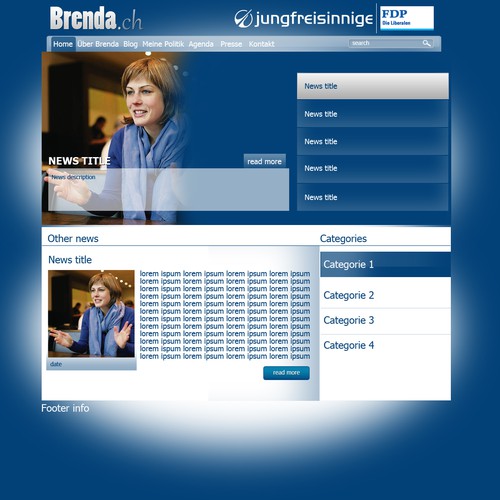 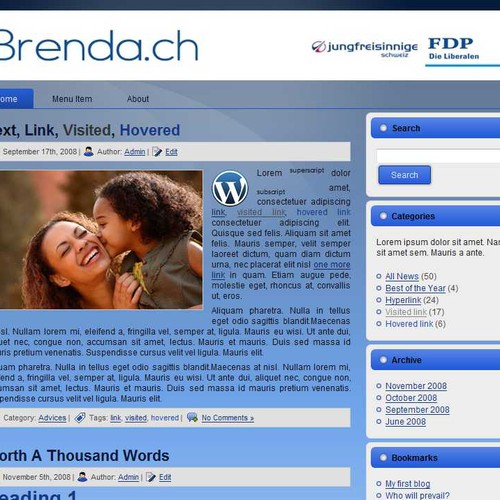 As a young Swiss politician (Brenda Mäder, president of the young liberal party of Switzerland) I am currently reshaping my web-appearance. For the campaign (Election of national council as well as the regional parliament’s election), a new website will be launched soon.

For the campaign in total, I am looking for a wordpress-template, referring to the idea of the already existing wordpress-design „Obama scheme“ (http://wordpress.org/extend/themes/obama). Also, on top of the site, a lettering/logo showing the web-address „brenda.ch“ should be shown. This lettering will also be used on hand-outs, business cards, etc. Shortly: The website „brenda.ch“ will be the campaign for Brenda Mäder’s political campaign.

The goal is to create a brand out of the name of the website. Therefore, one major part of the redesign is to create a Lettering/Logo for “brenda.ch”. For the coloring, as written in "Requirements", it should preferably be held in blue and white.

The lettering should remind of the following points/ideas:
- Young
- New idea
- Activity
- Frank, direct, straight to the point
- At the same time: serious
- My main topics in politics are personal freedom and therefore being a counterpart towards the ongoing growing of rules and restrictions. My other main topics are social politics (welfare state, health care, etc.) and, as a young politician, the long-term view in general.

The template should be referring to the idea of the „Obama scheme“, and show both party logo as well as the lettering „brenda.ch“ on top of the page. The template’s color scheme should principally stay the same as in the example, but, as the campaign is held in Switzerland, the „stars and stripes“-sujet should be left out.

In Swiss politics, name-letterings/logos are not very common. With the campaign „brenda.ch“, I am trying to do something new. This is also what the character of the lettering/logo should be and why the wordpress „Obama scheme“ has been chosen as an example. At the same time, my candidature for the National Council is meant seriously.

The current website, a „standard“ blog hosted by wordpress:
http://www.brenda.ch

The wordpress template, to be taken as an example, the „Obama Scheme“:
http://wordpress.org/extend/themes/obama

Positiv and negative points of the "Obama Scheme":

As the lettering/logo „brenda.ch“ will be used for printed products as well, it should be useable for printing large- and small scale.

Top-Left-Box
For every page, there will be a different picture of me in this box to make the website look personal.

Top-Right-Box
Here I would like to proclaim my 3 political statements in a striking way. Those statements should be clickable (Boxes, Buttons, etc.) and link to a subpage. 3 Main topics: 1) Personal freedom 2) Long-term goals 3) work should be worthwile.

Header
The newly created lettering of “brenda.ch” should be placed on the top left of the website. Additionally, the following two logos of political parties have to be placed in the header as well (attached as pics):
- FDP-logo: http://www.fdp.ch
- Jungfreisinnige: http://www.jungfreisinnige.ch

Home
On the homepage, there should be a Twitter-Feed with the last 2-3 entries and the common links to facebook, twitter and other social networks.
Also, there should be left some space to put in a paypal-account.

Color & Text
As the FDP’s main color is blue, the lettering „brenda.ch“ should preferably be held in blue and white. In total, the Obama-scheme-colors generally should be kept for the wordpress-template. Furthermore, I expect a complete typography for the website.

T shirt logo
899 US$
This is a non profit logo I want to use to make t shirts for my staff
104
entries
26
designers
Logo for DesignMind a company with focus on strategic design.
CHF 929
Who is DesignMind? DesignMind is a company focusing on strategic design. DesignMind promotes the mindset for the
281
entries
99
designers
Logo for psychotherapy private practice
299 $US
Logo will be for a therapy private practice that will eventually be named Peacetree Psychotherapy once I complete LLC pr
87
entries
33
designer graphistes
Design a modern/simple logo and brand guide to appeal to blue collar workers
USD 429
Our mission is to provide a world of new opportunities and growth for self-employed tradesmen (think Plumbers, Electrici
163
entries
43
diseñadores
Logo Medical Company Bio Works
EUR 1,199
Providing Medical Use Products. Desinfection and Protective Goods. Also oils with extracts like CBD or Melatonin and
388
entries
149
diseñadores
Luxury Wedding Boutique Design
C$ 399
We are a multifaceted company offering beauty and planning/design services in the wedding and event industry located in
81
entries
19
designers

Comienza ahora
Design a logo to help democratize Machine Learning
USD 499
We are a research organization that provides powerful machine learning tools free of charge to the world. AutoGluon is a
320
entries
75
diseñadores
Modern logo for a DeFi technology company.
499 $US
Decentralized Finance (DeFi) cryptocurrency services.
151
entries
67
designer graphistes
New logo for a modern cuisine luxury high end restaurant in France
500 €
Hi, we are a modern cuisine restaurant in France, selling luxury high end products. We only work with organic products
117
entries
32
designer graphistes
Design a logo for a vintage automotive brand
$ 499
Our brand is focused on providing content to the vintage (1963-1989) Porsche 911 community.
24
entries
11
Designer
Need Help with My Company Logo
299 $US
Target audience are CEO's and IT professionals. Information security. Executives that work in stock trading business.
122
entries
31
designer graphistes
Name Design Contest!
299 $
I am a country music artist and I would like to have a logo design for my name "John Green" in some shade of the color g
74
entries
24
Designer
Más información sobre diseño de tema de wordpress
Vea como funciona