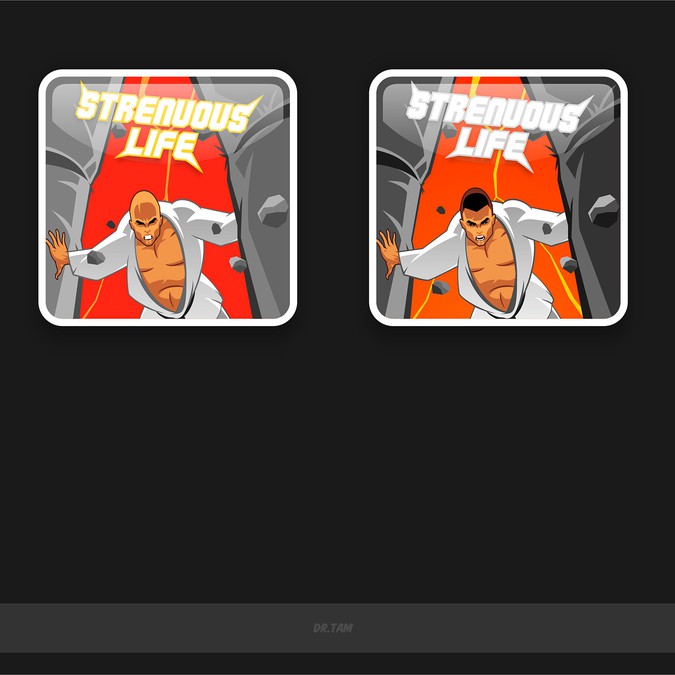 Design a new icon for The Strenuous Life Podcast 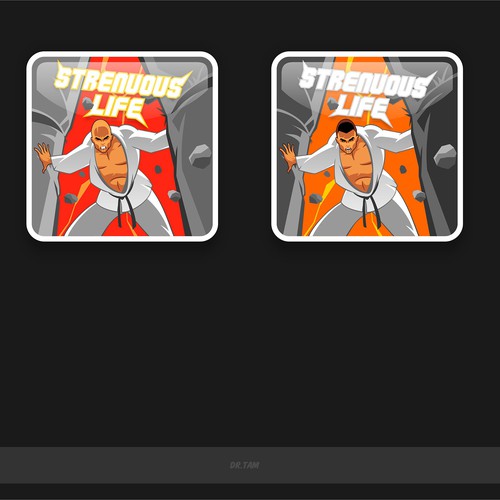 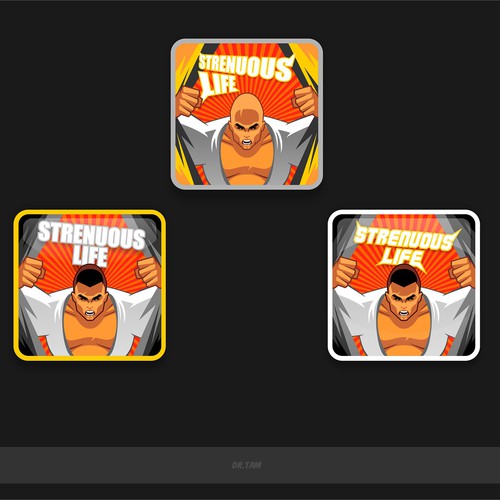 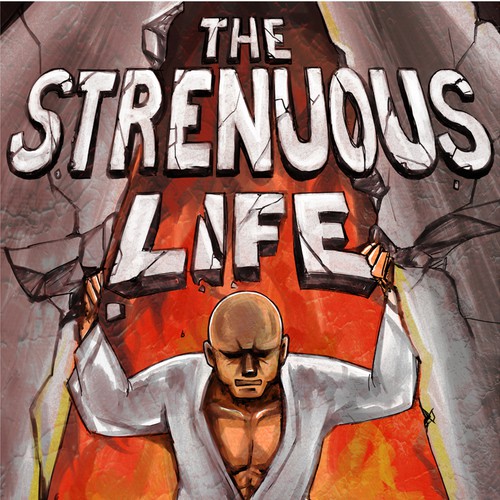 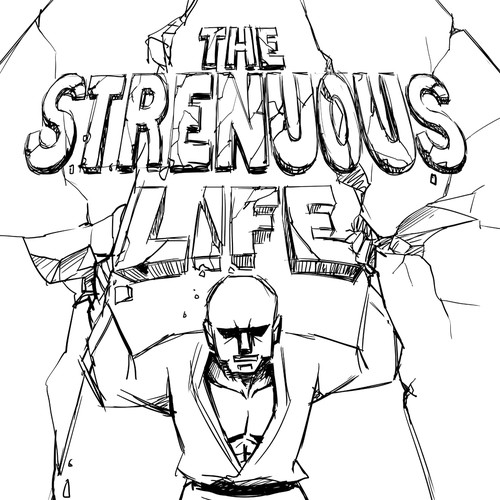 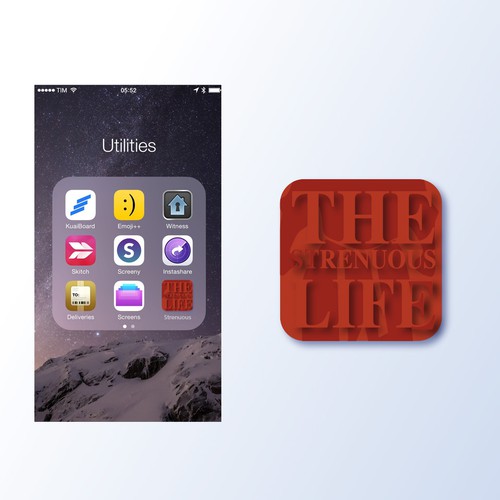 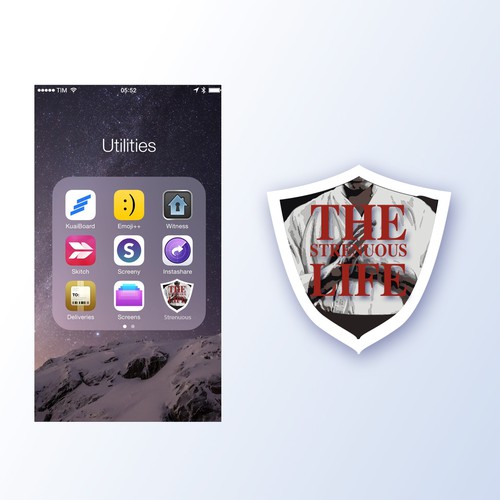 We sell apps, dvds, books and online products related to the martial arts, but this current project is for our podcast icon . Our target demographic is professional males age 30 to 55

One of my projects is the 'Grapplearts Radio Podcast', which is mainly focussed on the Brazilian Jiu-Jitsu and Mixed Martial Arts crowd. Currently my icon is me in a white gi and black belts.

I have, however, recently rebranded this podcast to be 'The Strenuous Life Podcast, with Stephan Kesting'. I still want to appeal to my martial arts audience but would also like to do about half of my podcasts with non-martial arts people (athletes, coaches, competitors in other sports) and so I need to change my icon.

My vision for this new icon is a stylised figure, similar to me but somewhat stylised so it's not a direct copy. Also younger, a bit more muscular, and

I think what I want is a stylized, shaved head, person (vaguely but not exactly like me) straining to push apart and break a couple of pillars on either side of him. This is essentially a Samson motif.

In that image the Samson figure would be wearing a stylised white tunic that would be reminiscent enough of a judo gi (Judo outfit) so that people who do martial arts would recognise it, but not so obvious that non martial artists would be put off by it.

I have included some images to give you a sense of what I want...

2) A Samson image. I generally like the stance of the Samson, but his arms should be bent to make this a more effective app icon (i.e. fit into a square space). That being said, I do NOT like the actual drawing style used in this image; it needs to be less cluttered and more stylised

3) Another Samson image - I like the style and look of the pillars breaking, although they should probably be somewhat thinner to make the image work in the square

4) This is a rough idea of what the drawn figure would look like (note a highly stylised gi, looking more like the tunic in picture 1 than a regular gi). Also the flames in the background are too large, but I like the black, red and yellow colors. Perhaps more of a flying-sparks image as in the next attachment (the fall of Rome podcast icon). Also the pillars should probabaly be 10 to 20% narrower so that the whole image it fits into a square icon better. And of course the text (The Strenuous Life or Strenuous Life Podcast) need to fit in there somewhere too.

5) This is an icon for another podcast that I really like. The color scheme of the marble pillars and the burning background is perfect, and I think we should probably try to do something like that.

6) I'm not sure, but I think it would work if the figure was slightly on the art deco side. The attached image (6) is actually a bit too art deco - it should still be semi-recognisable as me - but it gives you an idea of what I'm thinking about. If you have a different style in mind that could work too though

To do this project you must have good figure drawing skills.

The finished image needs to be square, minimum 1400 x 1400 pixels (2000 x 2000 would be better) with the words "The Strenuous Life" or "Strenuous Life Podcast' visible, large enough that it's readable when it's displayed in iTunes on a phone

I would also want the PSD and AI files for the finished image.

Design our own branded "Gold Medal" icon
$209
Online coaching/training for runners.
14
entries
7
デザイナー数
NumberCruncher Icon
199 $
Tax Preparation Software
60
entries
11
Designer
Redesign Simple App Icon
US$ 199
The app is a reverse phone lookup where you can leave comments. The best example and competitors is Mr. Number or Hiya
245
entries
18
diseñadores
Icons Needed for Space and Beyond!
US$ 299
Our mission is to simplify the complex by enabling anybody to create and implement standard operating procedures anytime
61
entries
8
designers
Travel Badges/Achievements
US$299
Working on an online way to track places you have been. Kind of like an online passport.
42
entries
7
diseñadores
Modern app icons
US$ 599
We are a software company, providing web and mobile solutions to small to medium sized companies.
114
entries
12
diseñadores

Comienza ahora
Create me a modern and eye friendly for my fax service app
US$ 199
Faxy is an app that helps users send faxes to printers from there phones.
47
entries
19
diseñadores
6 web icons for a modern psychology practice
US$ 199
Bankside Psychology will be a private psychology practice in a suburban Connecticut town. It will provide mental health
39
entries
7
diseñadores
Image for cash management web site
199 $
We run a web site (cashtamer.com) that allows users to manage their cash.
9
entries
3
Designer
Make me a beautiful app icon for my prank calling app called 3rdWheel
199 USD
3rd Wheel is a prank calling ios app that link two contacts that you choose from your phone and adds them to a conferenc
68
entries
24
designer
New Icon design for major Cloud Based research platform
A$399
We are a software development firm that has a suite of products for the market research industry.
40
entries
12
デザイナー数
Icon Set
159 £
We are a family owned and operated restaurant group that serves classic southern dishes and bbq buffet style for thee pa
39
entries
24
Designer
Más información sobre diseño de icono o botón
Vea como funciona