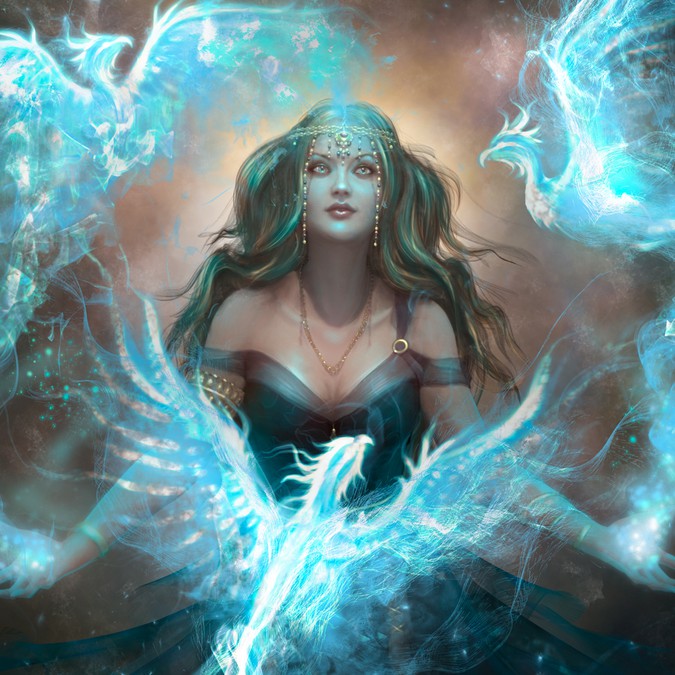 Draw a card picture for a trading card game like Magic 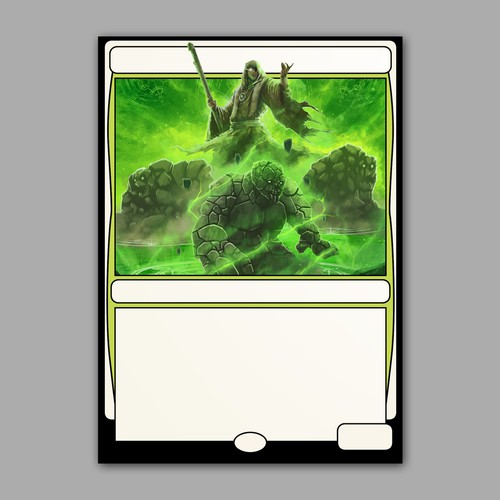 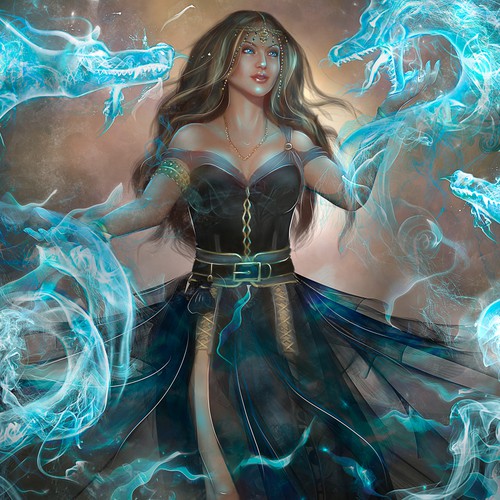 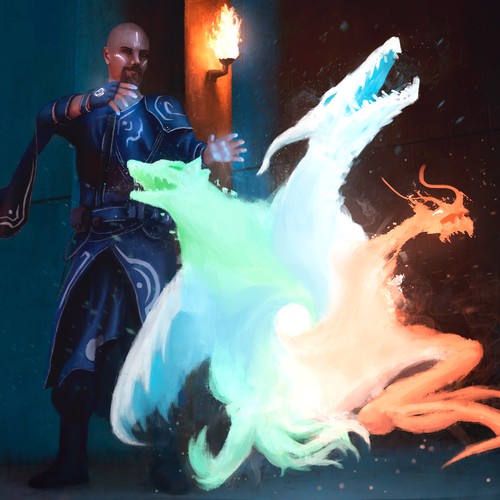 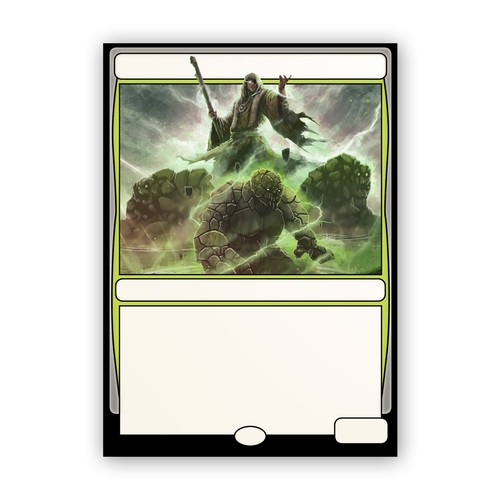 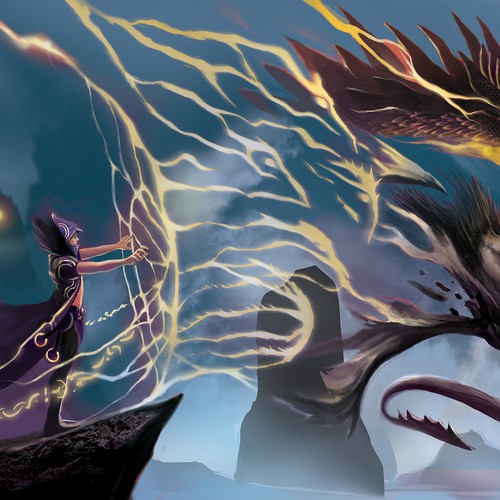 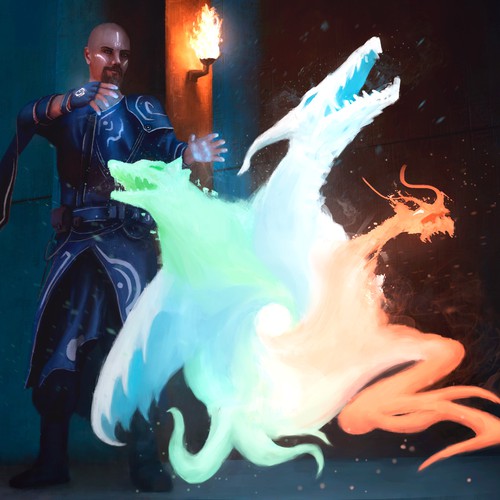 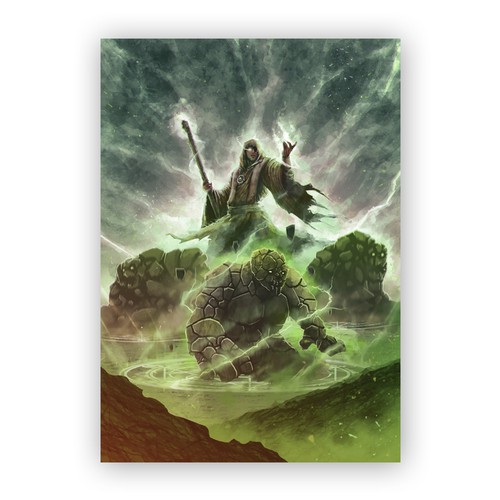 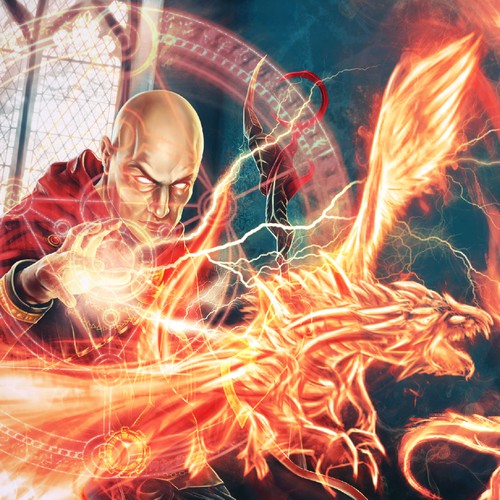 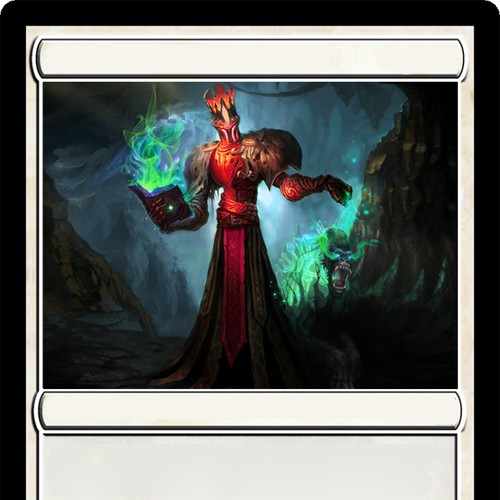 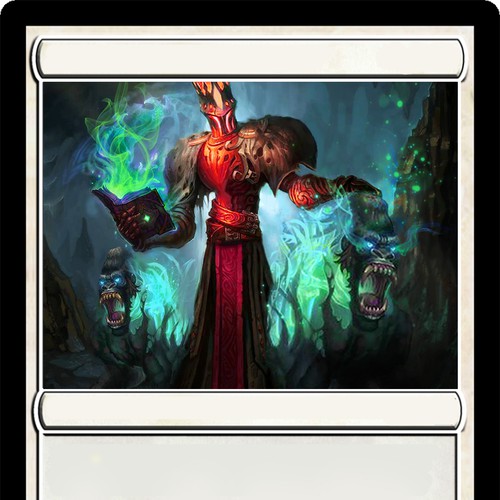 We are a nerd shop that sells shirts and gadgets targeted at nerds. Please take a look at http://www.getdigital.eu for examples of the products we sell.

We are planning to release tokens for trading card games. Main target is the most famous game "Magic the Gathering". It is helpful for this contest if you know the game, but not 100% necessary. To get a quick overview, please watch this youtube series: https://www.youtube.com/watch?v=GadqHggATe8

The player in Magic is a so called "Planeswalker", which are powerful sorcerers. Players place cards in front of them and use them to attack the oponent or do other things that manipulate the game. Putting down a card is equivalent to casting a spell. The most things in the game are bound to a card, but there are also some cards in the game that can generate more than one object in the game besides themselves. These objects are called tokens and usually players represent them by using small stones or the official token cards from the manufacturer of the game, but most of the time players do not have enough or the correct official token cards. There are many many different types of tokens that all have their own official card. This is how the official token cards look like: https://www.google.de/search?q=magi…91&dpr=0.9

Our plan is to print some kind of universal token card. The idea is to sell decks of 100 cards each, all of them looking the same. The user can then write on the card himself to make fit exactly to the token he wants to have. For that, we want to generally use a normal magic card design, but remove all the specific information. This is how a typical magic card looks like:

These fields should be blank white in our version:
- the name top left (here "Avacyn...")
- the type of the card below the picture (here "Legendary Creature - Angel")
- the long text below the pic
- the power and life points in the bottom right corner (here "5/4")

We want to totally remove:
- the mana costs in the top right (here "2" + "3 suns")
- the edition of the card in the middle on the right (here "M15")
- the artist information and the silver dot at the bottom.

That part was easy, but the difficult part is to replace the big picture in the middle. If you do not know how to do the above parts but you can only draw a very nice pic, feel free to just send in the pic. We can do the rest ourselves! Magic cards always have a nice fantasy drawing which somehow depicts what the card is about. In this case, that is rather difficult as we want to make a universal token. So we can not show 100% what it is about, but as Magic is a game of sorcerers, we want to show a sorcerer casting a spell. It could be slightly visible what is cast by the spell (starting to get formed) and maybe show the beginning of a form of a creature (as most of the time tokens are creatures), but it should be unclear enough that it can also be something completely else like an artifact.

To give you some inspiration and an idea how it normally looks like when magic cards show a sorcerer, here are countless examples: https://www.google.de/search?q=Magi…izard+blue
Keep in mind that most of these only show sorcerers casting someting, but our idea is to let it show a bit more so that it becomes clear that the spell is actually creating something and not just inflicting damage or countering another spell.

Feel free to ask additional questions about the brief and please keep in mind that the picture in the middle of the card is the main reason we made the contest.

Please keep in mind that the main thing we want here is the drawing in the top middle of the card. We do not really care about the card design itself as we can do that ourselves. Please do not take part in the contest if you are not really good at drawing.

Create a haute boho graphic for an up and coming travel boutique.
USD 549
Luxury bohemian boutique for travel loving females
81
entries
18
diseñadores
Stem Cell sources made simple
US$ 349
cell and gene medicine communications for the seventh grader
3
entries
1
designer
Illustrate a Flying Chicken !!
349 USD
We are a chic restaurant that specializes in slow roast chicken
36
entries
20
designer
PTP - Laptop Sticker Design
$469
We help growth companies accelerate innovation through our cloud governance, operations and security services for their
80
entries
22
デザイナー数
Playful and sophisticated fabric pattern for climbing chalk bag for women and men
409 $
The mission of Rosebud Designs, LLC is to enhance the lives of our customers and our families by offering well-designed,
223
entries
34
Designer
Illustrations for transactional emails
$ 899
BidBuyBaby is a resale marketplace for certified pre-owned strollers and smart bassinets. We server parents with infants
25
entries
10
Designer

Comienza ahora
Medieval catapult illustration hurling a business forward
US$ 349
CEO coaching and strategic planning for companies that are looking to grow their business through innovation.
39
entries
20
diseñadores
eBook cover for an Australian Writer.
A$739
I am an Australian blogger who has been writing on Medium.com for several years.
27
entries
11
デザイナー数
Agrictulure Vector Icons
349 $
This company sells raw material substrates and potting soils globally.
67
entries
23
Designer
Rans 21 paint scheme
USD 549
I help people build kit aircraft. I have one almost ready for paint scheme. The plane is a Rans 21 outbound
47
entries
8
diseñadores
Logo for Essential Oil Company to appeal to women
299 $US
Product: Essential oils from plants and flowers that are then sold either by themselves and also used to make skin care
92
entries
32
designer graphistes
Create Cover Illustration For Top Ranked Podcast
$349
A podcast that analyzes a book each week and uses the concepts to help entrepreneurs with their journeys
22
entries
13
デザイナー数
Más información sobre diseño de gráficos e ilustraciones
Vea como funciona