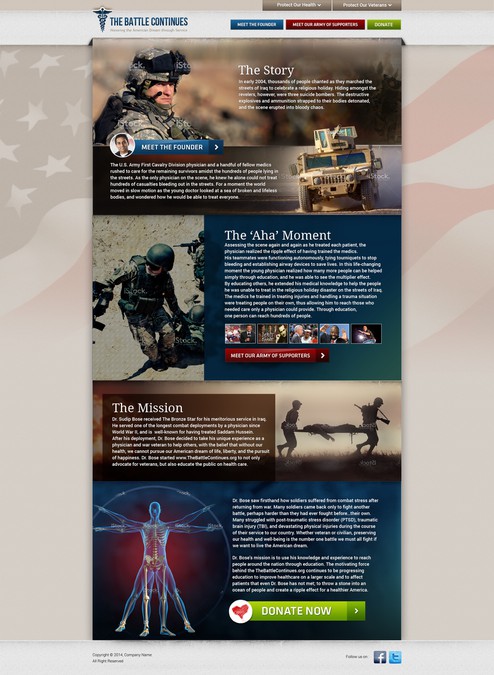 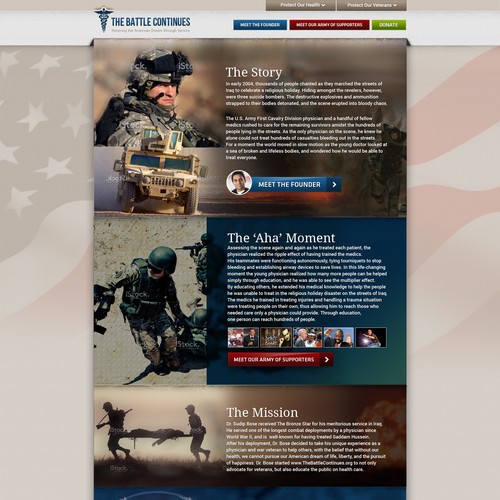 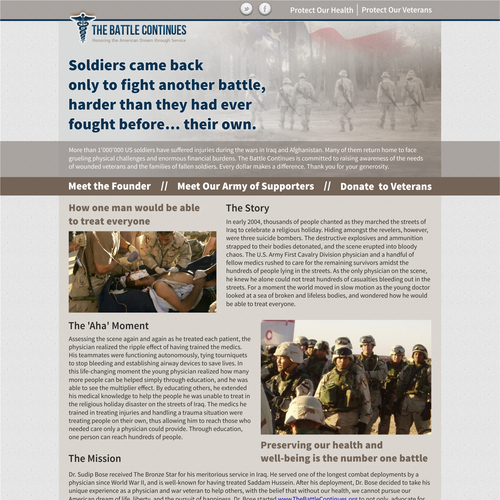 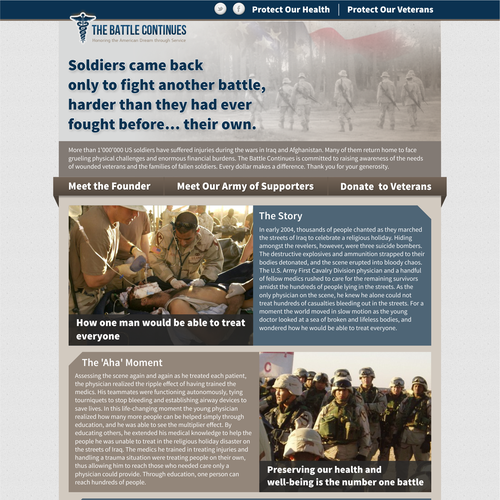 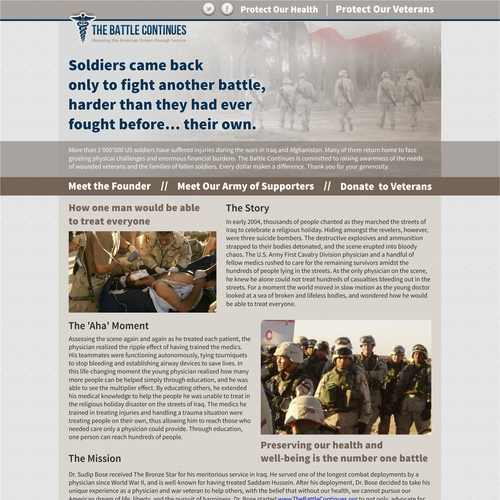 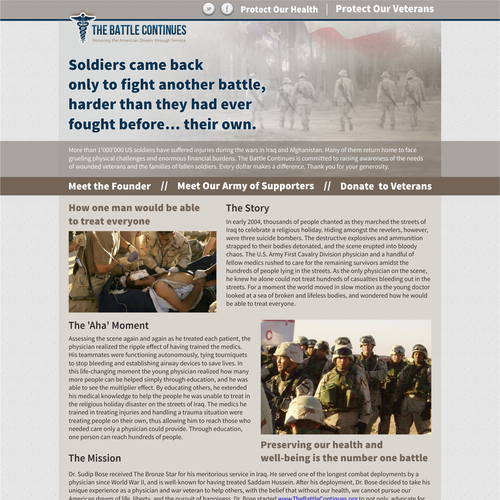 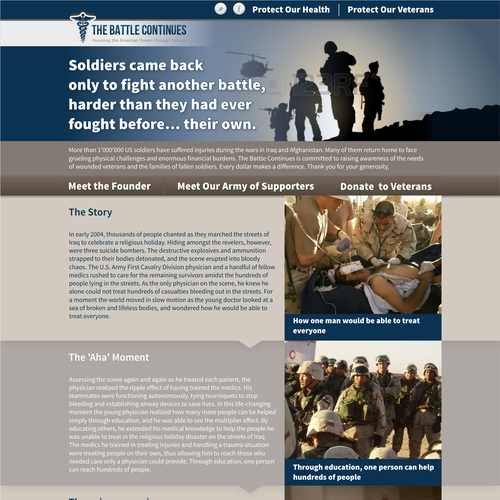 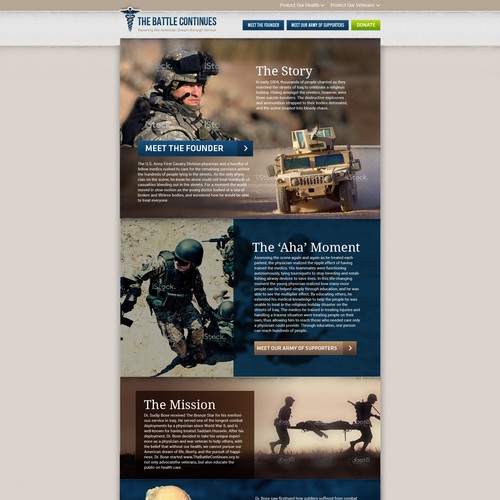 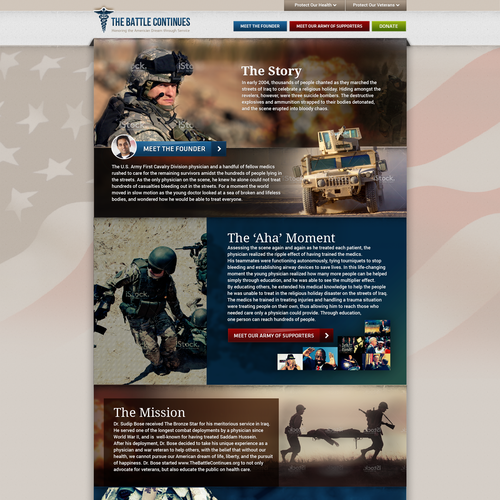 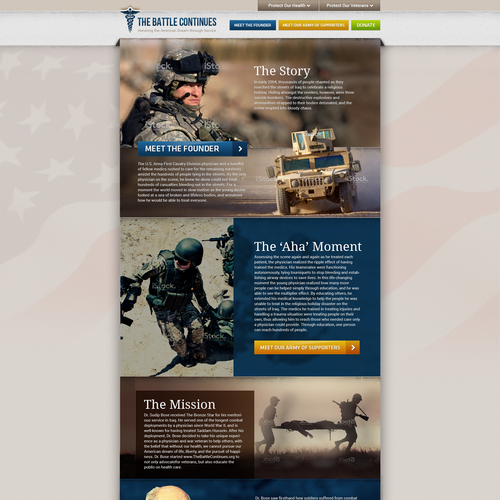 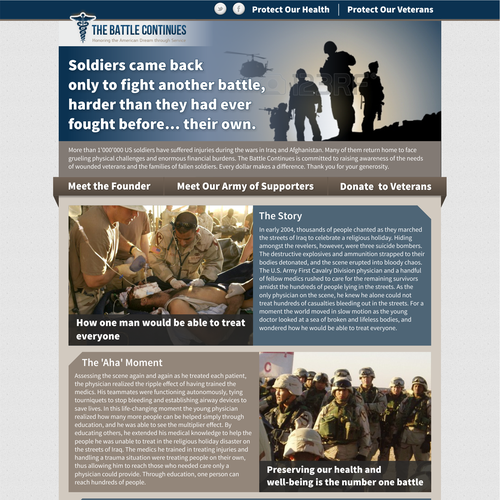 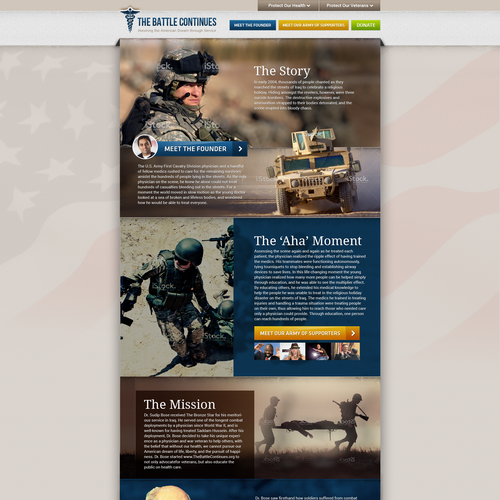 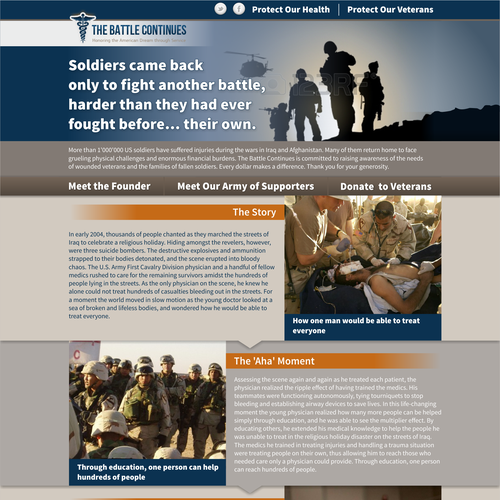 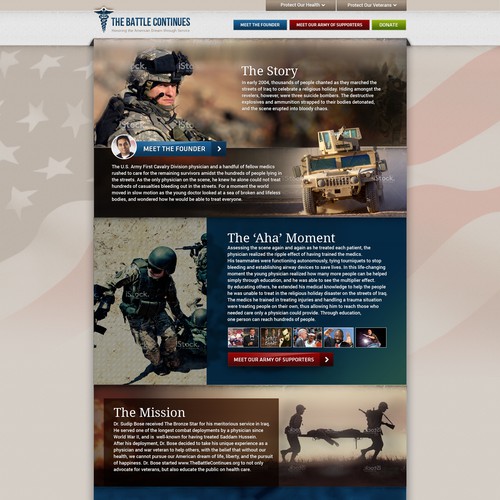 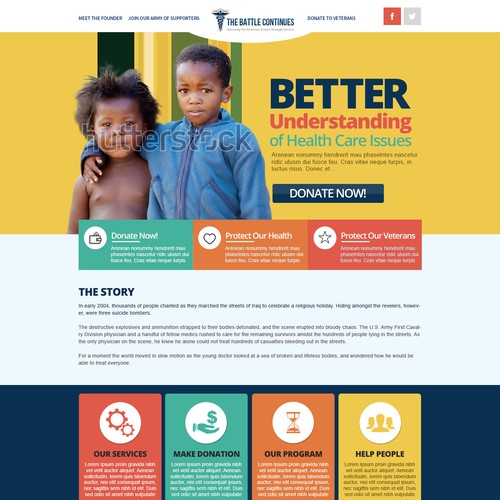 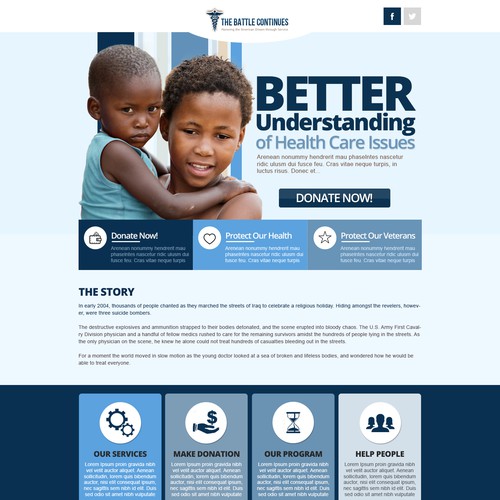 Dr. Sudip Bose is a motivational speaker. He advocates for veterans and educates the public on health care. He is a physician and a veteran. He combines his prior experience to give motivational lectures and at the same time raises money for his charity: The Battle Continues.
Primary objective: when people visit the website, they should want to donate money to the charity...money will go to veterans and things that promote healthcare

Please see attachments. We want to add the story(attachment titled TBC Story) on our landing page...you may include any images to make it eye catching....please use your creativity...We broke the story into 3 parts to make it easy on the eyes for the user viewing our site

The Story
In early 2004, thousands of people chanted as they marched the streets of Iraq to celebrate a religious holiday. Hiding amongst the revelers, however, were three suicide bombers. The destructive explosives and ammunition strapped to their bodies detonated, and the scene erupted into bloody chaos. The U.S. Army First Cavalry Division physician and a handful of fellow medics rushed to care for the remaining survivors amidst the hundreds of people lying in the streets. As the only physician on the scene, he knew he alone could not treat hundreds of casualties bleeding out in the streets. For a moment the world moved in slow motion as the young doctor looked at a sea of broken and lifeless bodies, and wondered how he would be able to treat everyone.

The ‘Aha’ Moment
Assessing the scene again and again as he treated each patient, the physician realized the ripple effect of having trained the medics. His teammates were functioning autonomously, tying tourniquets to stop bleeding and establishing airway devices to save lives. In this life-changing moment the young physician realized how many more people can be helped simply through education, and he was able to see the multiplier effect. By educating others, he extended his medical knowledge to help the people he was unable to treat in the religious holiday disaster on the streets of Iraq. The medics he trained in treating injuries and handling a trauma situation were treating people on their own, thus allowing him to reach those who needed care only a physician could provide. Through education, one person can reach hundreds of people.

The Mission
Dr. Sudip Bose received The Bronze Star for his meritorious service in Iraq. He served one of the longest combat deployments by a physician since World War II, and is well-known for having treated Saddam Hussein. After his deployment, Dr. Bose decided to take his unique experience as a physician and war veteran to help others, with the belief that without our health, we cannot pursue our American dream of life, liberty, and the pursuit of happiness. Dr. Bose started http://www.TheBattleContinues.org to not only advocate for veterans, but also educate the public on health care.

Dr. Bose saw firsthand how soldiers suffered from combat stress after returning from war. Many soldiers came back only to fight another battle, perhaps harder than they had ever fought before…their own. Many struggled with post-traumatic stress disorder (PTSD), traumatic brain injury (TBI), and devastating physical injuries during the course of their service to our country. Whether veteran or civilian, preserving our health and well-being is the number one battle we must all fight if we want to live the American dream.

Dr. Bose’s mission is to use his knowledge and experience to reach people around the nation through education. The motivating force behind the TheBattleContinues.org continues to be progressing education to improve healthcare on a larger scale and to affect patients that even Dr. Bose has not met; to throw a stone into an ocean of people and create a ripple effect for a healthier America.

TABS
We would like to add two tabs anywhere on the page (where we can add sub-tabs underneath):
“Protect Our Health”
“Protect Our Veterans”

We would like a “Meet Our Army of Supporters” button (doesn't necessarily have to be a 'button' ...if you have another idea...we are open) which links to our celebrity endorsement videos http://thebattlecontinues.org/donate_draft.php

You may use any other images that you would like...please use your creativity...

Design a landing page for fashion clothes company
499 €
We are Women clothes Wholesaler website, products are manufactured in Italy and China.
29
entries
14
designer graphistes
Children Toys Landing page visuals
400 €
We are a company dealing with toys for children of all ages. We now want to establish an online store where our costumer
38
entries
13
designers
High converting landing page for modern recruitment platform
SGD 499
We are in the recruitment industry. Our target audience is jobseekers, employers and recruitment agencies.
76
entries
19
diseñadores
Bad Ass Landing Page With Recommendations For Tools
$899
Help people pick the right online tools and books to succeed with an online business.
37
entries
15
デザイナー数
Refreshment of an existing landing page
319 €
It's a comparison website for online brokerage (online stock trading). Our target audience are visitors looking for info
50
entries
16
designers
Design A Creative Landing Page for our eCommerce Product Supplier & Product Distribution Business
$349
eCommerce Supply Chain is a B2B Software Business that provides an eCommerce Product Supply & eCommerce Product Distribu
12
entries
5
デザイナー数