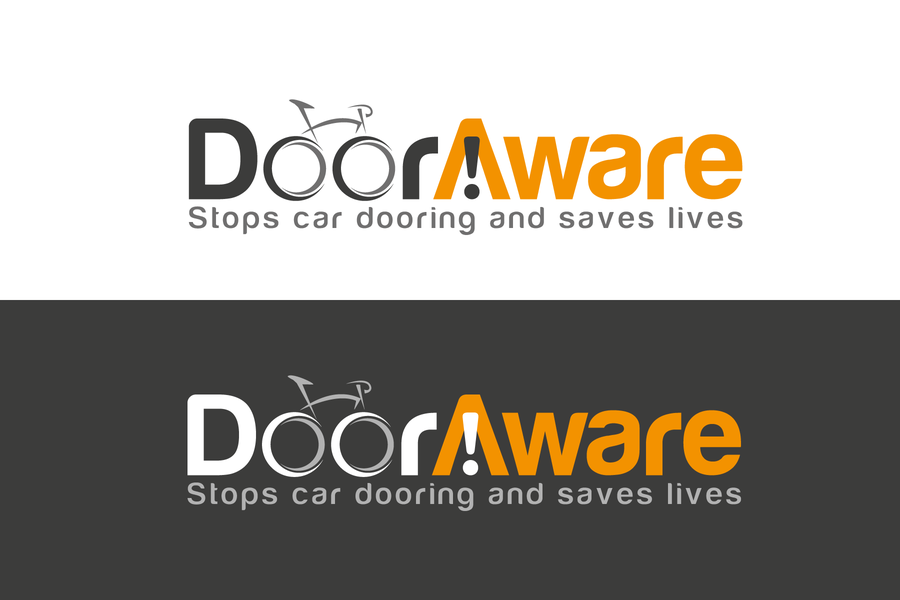 Create a Logo for a new product which stops cyclists being seriously injured or killed on our roads. 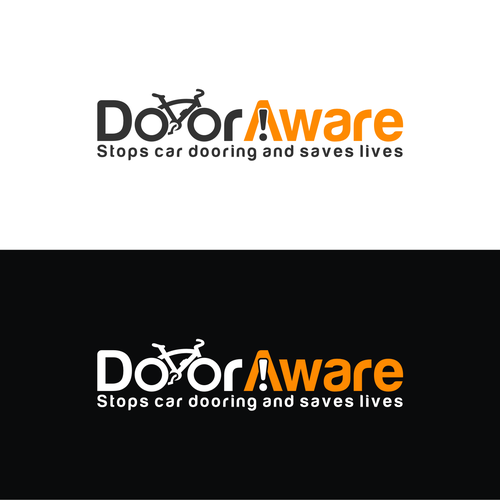 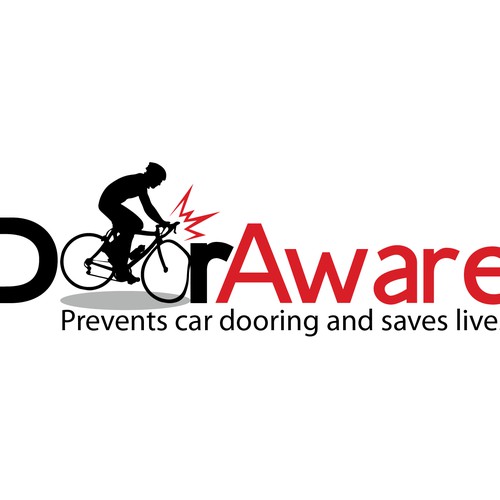 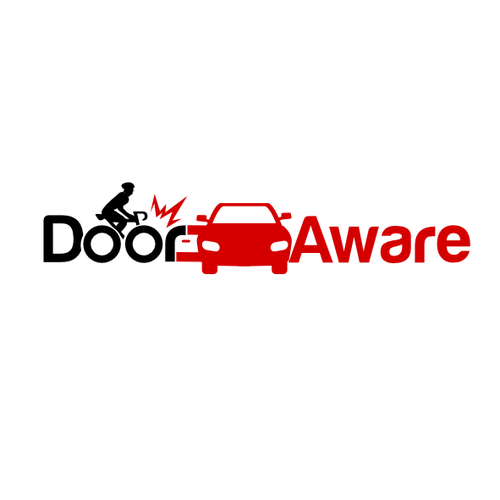 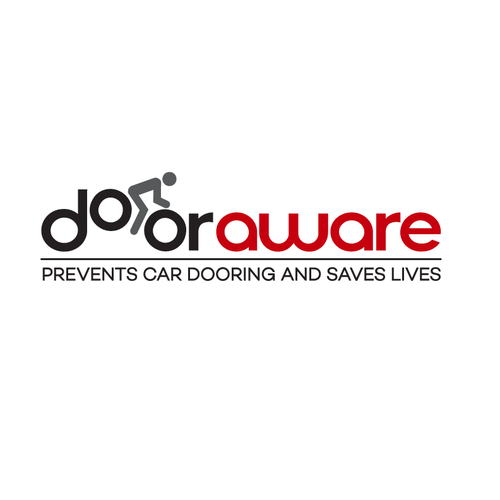 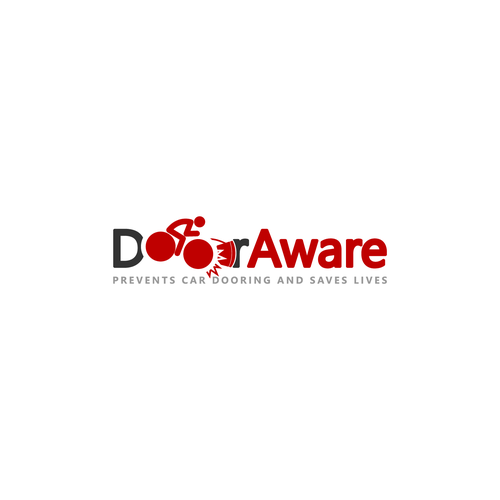 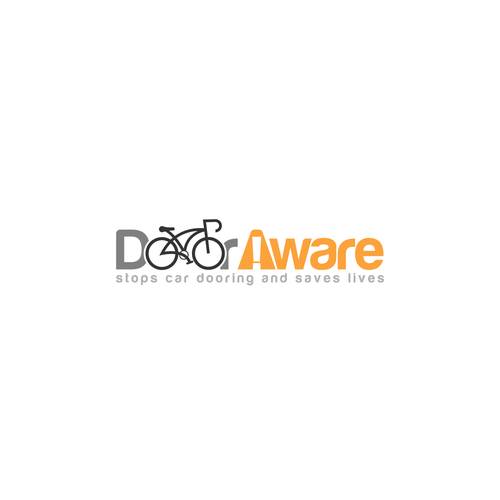 Dooring is the name given to an incident whereby a driver, or passenger, of a parallel parked car carelessly opens their door in the path of an oncoming cyclist. This can result in serious injury or even death.

The door zone is a 1.2 metre space to the side of a parallel parked car, the space which the door occupies when opened. Unfortunately, cyclists are not often given separate lanes and cycling lanes are often directly within the door zone due to lack of space. This makes dooring a frequent concern for urban cyclists.

Dooring is hazardous because it happens very quickly. It takes only a second for a door to open into the direct path of a cyclist.

DoorAware is a low cost after-market product which fixes to front guard of a motor vehicle (external) and indicates to approaching cyclists whether the vehicle is occupied or not via a bright reflector i.e. someone has parked their vehicle but has not exited yet.

This early visualisation allows cyclists to identify a potential door opening in advance and take precautionary action to avoid it by slowing down or safely riding outside of the door zone.

DoorAware has been designed to reduce the number of serious injuries and deaths caused by dooring incidents on our roads, particularly within urban areas where there is a high population of motor vehicles and bicycles.

The logo shall be appealing to both motorists and cyclists.

The product name should become the basis for the Logo. I would like
you to use the "oo" in DoorAware to represent the wheels of a
bicycle. I want the Logo to clearly illustrate that the
product is related to cycling and safety/danger. I think more of a
horizontal orientation is best rather than vertical. I quite like
crisp, clean logos..not complicated or cluttered. Once I have
selected my final logo, I would like two different colour selections;
one that suits a white background and one that suits a black
background.

Design a clean, professional logo for an electric vehicle consultant
$299
We are a consulting company for electric vehicle technology, mostly focused on battery technology. Customers are large a
300
entries
55
designers
Dripping Diesel needs a fitting logo
$299
Diesel & Automotive repair
53
entries
11
designers
Innovative truck driving company needs fresh logo
299 US$
We are two young entrepreneurs that are starting a truck driving company with a goal to be disruptive in the industry by
110
entries
23
diseñadores
Custom adventure vehicle Logo
CA$399
We build custom and prefabricated Vans and adventure vehicles for people who want to go camping and or live off grid ful
85
entries
29
デザイナー数
1950's truck restoration garage's logo
299 US$
Company name is "Bolts Right Up". We rebuilt old classic Chevrolet pick up trucks specifically 1947 thru 1959. Its a s
161
entries
24
diseñadores
New and fresh look for an ATV and UTV customize and repair shop.
USD 299
Customize and repair ATV, UTV and golf carts. Young to middle age buyers
53
entries
14
designer

Comienza ahora
Create a modern logo that has class for a luxury wake-boat dealership.
$299
We are a top boat dealership in the state of Idaho, we sell boats between 100 and 200k for wakeboarding and wake surfing
47
entries
12
designers
Auto repair shop needs powerful new logo
299 US$
An auto repair shop in Chamblee, Georgia specializing in the repair of Honda and Acura cars, established in 1983
204
entries
13
diseñadores
Create a Sexy Lux Logo for Yachting Co That Makes the Other Yachts Jealous!
$299
What We Want: Please note, our name is Adrian's Five-Star Yacht Services but we are looking for a change. We'd like to s
110
entries
24
designers
Up and coming chain of used car dealerships needs eye catching, memorable logo and tag line
$499
used car dealer. Targeting customers with less than perfect credit to purchase reliable vehicle.
30
entries
5
designers
roksmotion
€269
We are a car rental company and we are looking for a logo which stays in brain. Everybody who sees the logo should know
46
entries
18
designers
Save children’s lives!
US$299
Car alert for sleeping children. Target audience is moms and people with young children. Saves children from hot car dea
140
entries
37
designers