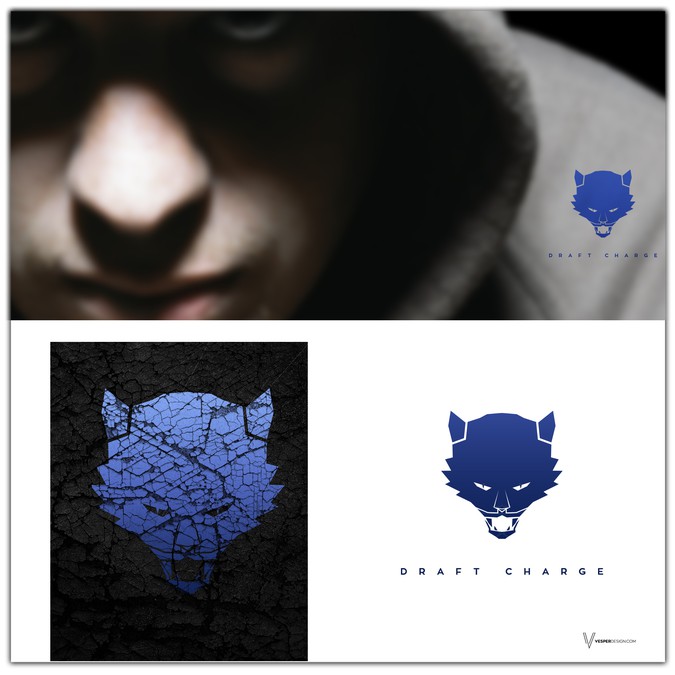 Create a unique, modern logo for an up and coming athletic brand 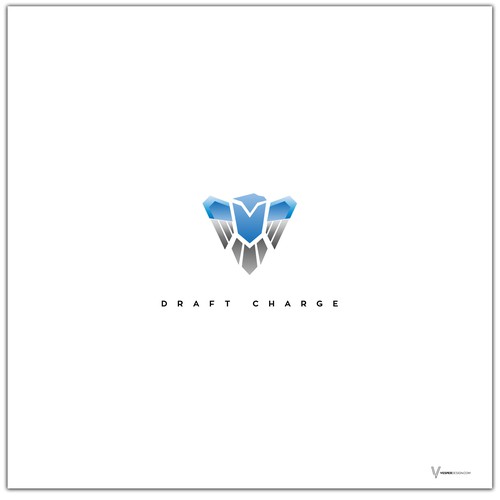 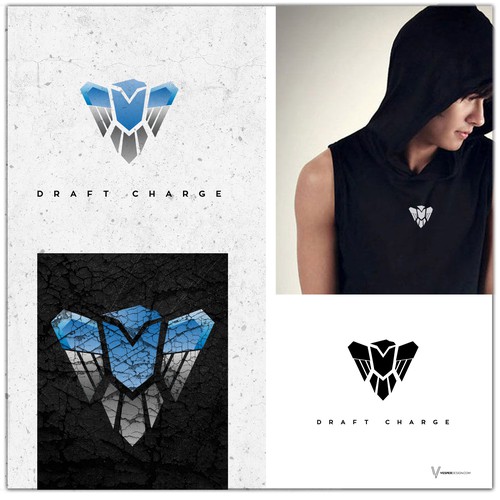 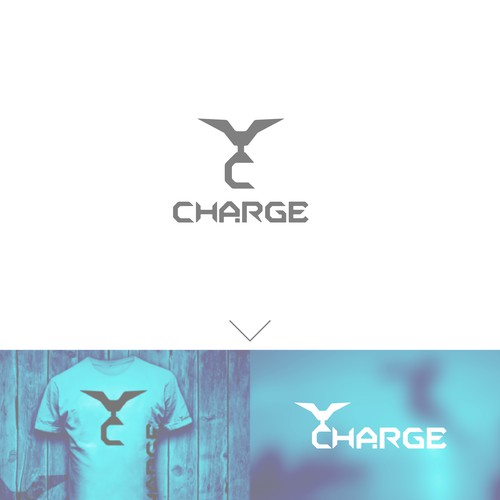 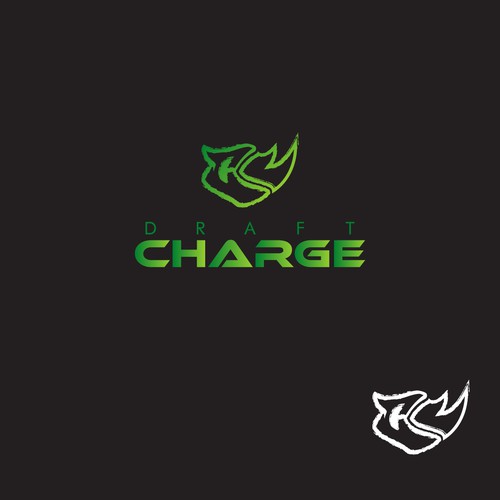 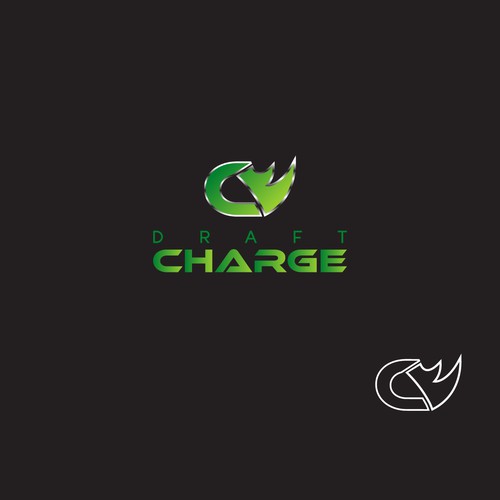 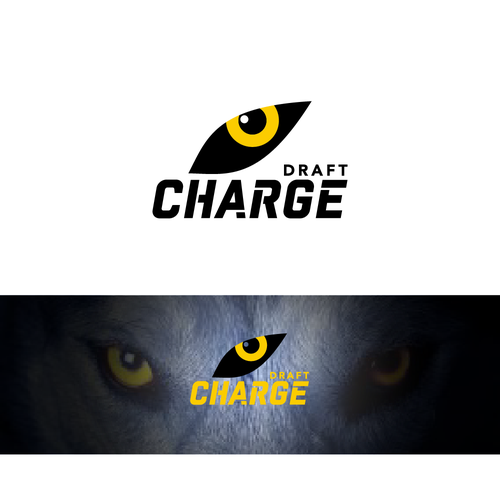 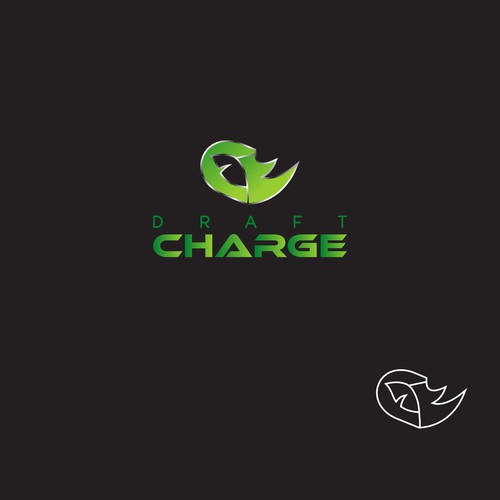 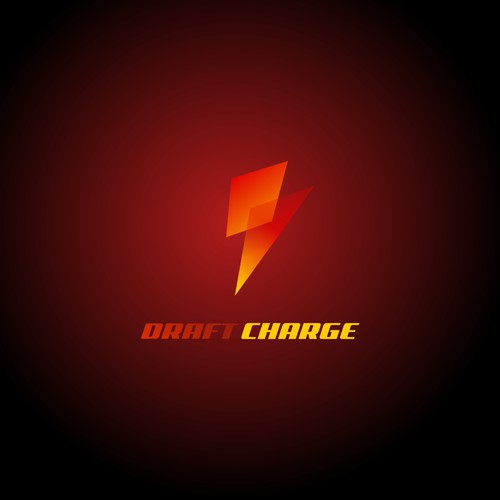 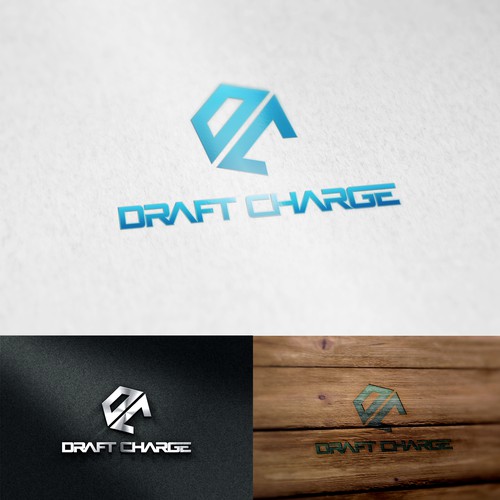 Don't have to incorporate unless you believe it really compliments the design, but the slogan is "The draft lives here."

Draft Charge is a organization that strictly covers the NFL draft, however I want a logo that will allow me, if I choose, to expand not only further into football, but all sports. So when designing keep that in mind.

My brand's target audience are athletes, sports fans, and people into the urban/hip hop culture under the age of 30; I want people to want to wear the logo on a shirt, sweatshirt, or hoodie for the simple fact that they think it looks cool.

As I already mentioned, I want this design to look stylish and clean on athletic apparel (I'll attach pictures of specific kinds) almost like Nike or Jordan clothing. Also, just to emphasize it a little bit more, I want this logo to have room for expansion not only into all sports, but to health and things of that nature.

What I'm really looking for is a simplistic, clean/sleek, modern logo that isn't plain and basic and I really don't want a logo that feels cartoony or arcadey like my current logo does. I want a logo that has a stylish flair to it that athletes, sports fans, and even people into the hip hop/urban culture would want to associate themselves with.

When designing the logo, you don't need to feel obligated to fill the logo with a whole lot of meaning (although you certainly can), as you can allow myself and my brand to do that. For example if you want to make the logo an animal, like a wolf or something, if you feel you can tie it in with theme/tone I'm trying to set with my brand, go right ahead!

For coloring feel free to get creative! With that said, I want the logo to look good on my main site (DraftCharge.com), however if you think you really have a killer design in mind that might not go perfectly with my site's design, still send it over, because I can be flexible.

Wording -- if you choose to incorporate it -- should be complimentary to the design; the design shouldn't be reliant on the text. If you want to choose one letter to emphasize, make sure it's the 'C' for "Charge", however I wouldn't go this route unless you really think you can blow me away with something. Also, with text or wording in logo, make sure that it's editable with specific fonts used (downloads), so that I'm able to change up wording in the future and am also able to avoid any issues with copyright.

The design will be displayed on clothing, social media pages, YouTube videos, my website along with others, business cards, etc., so when you present the design to me, it would really help if you could display it on different colored backgrounds and different surfaces.

Also, with how much attention my brand already generates, there should be a fair amount of exposure for the winner.

By the way: in addition to the pictures of clothing, I'll also attach some designs that really stand out to me and I really like. Hopefully that helps you get an even better feel for my personal preferences.

EDIT: A lot of the submissions early -- that have incorporated lettering -- have placed the emphasis on the 'D' in "Draft Charge", however the word I really want emphasized with this design is "Charge", because making "Draft" the emphasis limits me exclusively to the NFL draft when I want to be able to expand. I'd personally recommend not even including a "D" in the design.

EDIT: Pretty much every design that has come in thus far is based around lettering, but I highly encourage designers to try and capture the feel in a different way. The word "CHARGE" is what I really want to emphasize and capture with this logo and lettering just isn't doing it for me.

EDIT: Some added help for designers. When I think of the word 'Charge' I think of it in a somewhat loose sense. For example, the words POWER, PASSION, ANGER, ENERGY, etc. all come to mind for me. How you -- the designer -- are able to bring those words to life is up to you!

EDIT: Sorry for making these clear earlier on in the contest, but I'm not a big fan of logos featuring a rhino or a bull.

UPDATE 5:16 PM (U.S. Central Time) on 6/3/2016: I've received many great designs from some very talented designers thus far. With that said, the contest is still very much up for grabs and if you don't think you have enough time to come up with a great concept, let me know! I'm able to extend the contest time if need be.

UPDATE 11:58 AM (U.S. Central Time) on 6/5/2016: I've decided to extend the contest run time for the benefit of the designers who've entered the contest, as well as for my own personal benefit. If you've been waiting on entering, don't be afraid to do so now!

Couple Dancing blends into a wave logo
US$ 299
We sail. Name means dancing sea. The picture that I will submit is the couple who own the boat.
39
entries
12
designers
Create Fun Miracle League of Arizona Baseball All-Star Game Logo
299 US$
Baseball Program for Special Needs Children. Lots of fun.
53
entries
10
diseñadores
Help redefine swimming with this Aussie tech startup!
AUD 399
LONGCORSE is redefining how swimmers train.
351
entries
34
diseñadores
Collegiate eSports Logo
CA$399
We are a collegiate eSports team at the University of Toronto competing in Rocket League tournaments in NA.
76
entries
31
designers
yacth needs creative unique logo
US$299
This is an alternative logo for a yacht burgee. The logo is a squirrel. Looking for something easily distinguished fro
149
entries
41
diseñadores
Design a Trail/Ultrarunning Running Event Logo
US$299
This logo will be for a long distance trail running event. This event will take place on a working Ranch in the state of
29
entries
10
designers