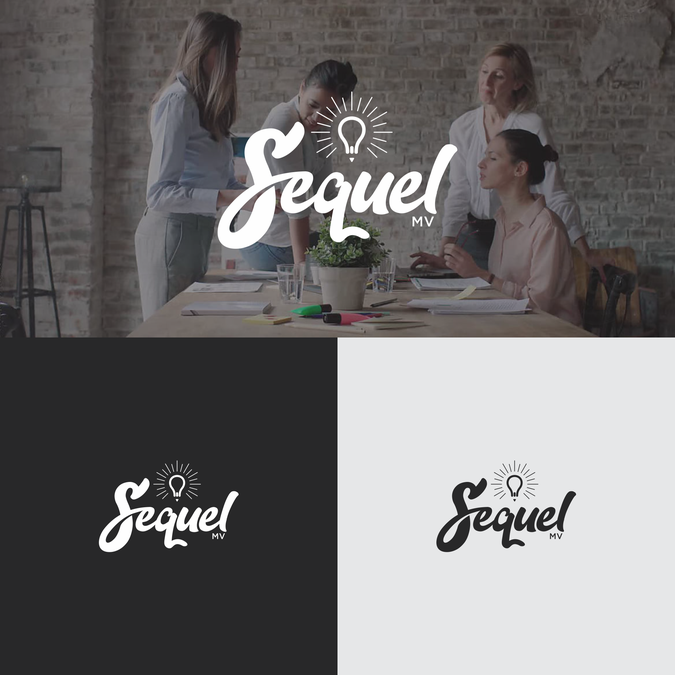 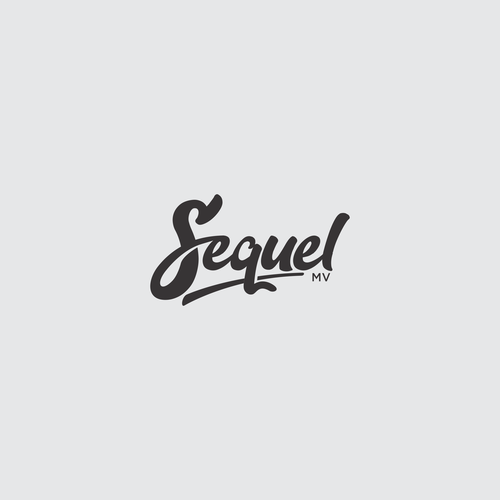 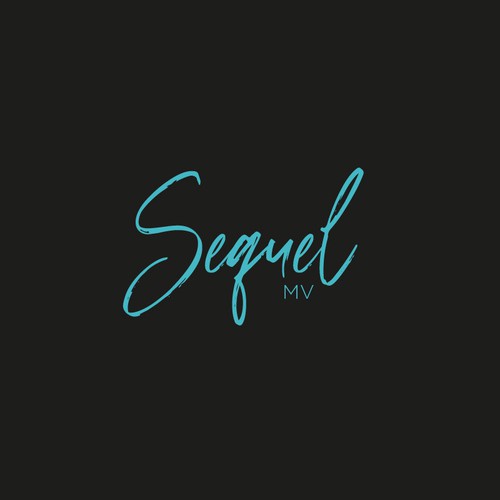 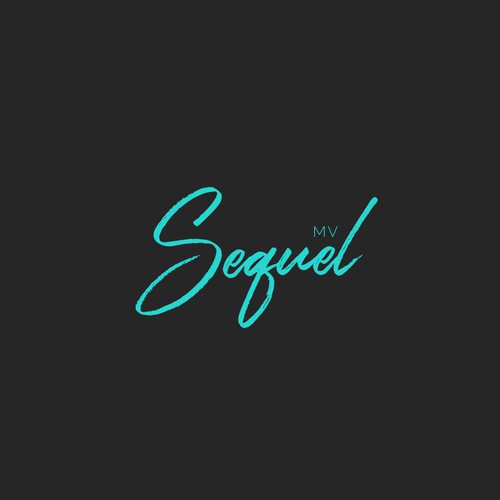 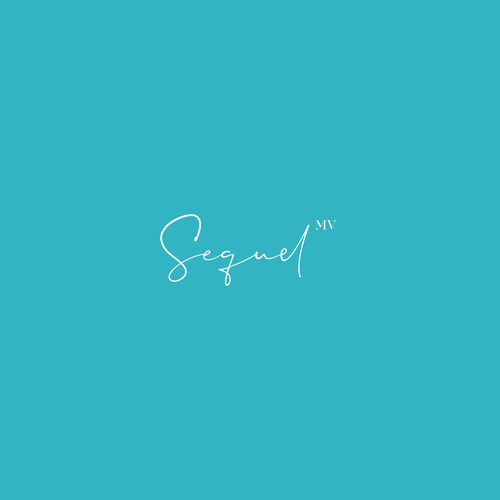 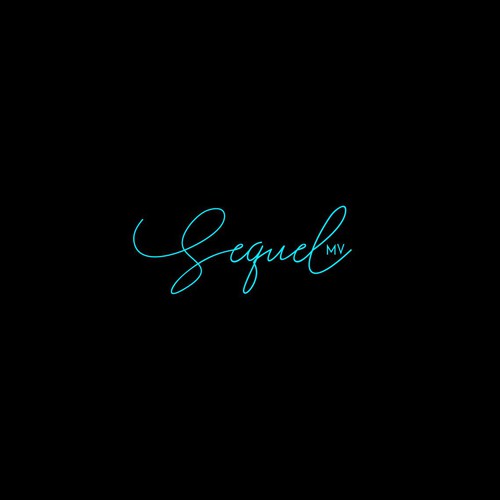 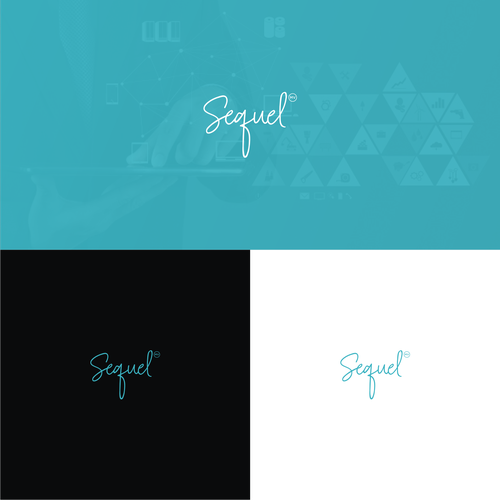 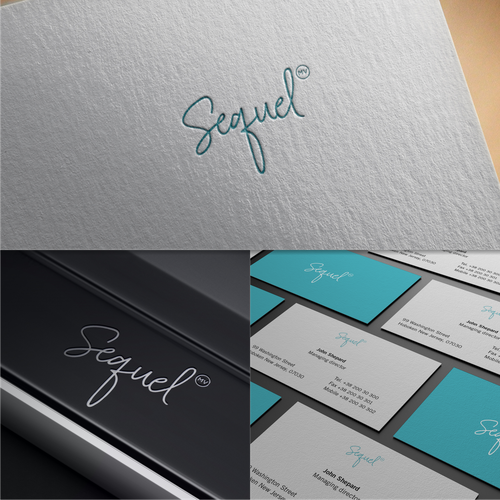 Our company is focused on delivering targeted use of story and technology with a hyper focused marketing strategy to support that content.
Our target customers are businesses that want to further engage their customer and/or team-members. We help to educate audiences about our partners' details on products, services and core principles. We strive to deliver superior customer service for our clients, giving them the priority they deserve.

Design & Layout notes:
Our logo is separated into 2 parts. The name itself is Sequel. This should stand out as the primary focus. The second part is the “MV.” This added naming of the business is adding a personal touch to the brand separating us from other companies that have a similar name; while also communicating that our business with clients has a personal level of investment with our “stamp of approval”

(Sequel)
We envision the design of the Sequel logo to include a thin design cursive font, calligraphy pen illustration, or elegant thin font.
The desired impression is to visually communicate a level of originality and creativity with flowing lettering and usage of space and layout.
*Optional - Lettering can be used in a creative way to communicate action or logo within the lettering itself.

(MV)
Usage of MV should be considered in similar fashion to the use of a trademark usage “TM” with similar subdued placement and scaling. This will be used within our branding as a “stamp of approval” for anytime it appears.
We envision this part of the logo to be visually separate from the free flowing feel of the title text (sequel). We want the MV to stand out with a more traditional font that include straight defined lines. Communicating that when a client sees the use of the MV that it is a contract of our commitment to quality and customer service. There could be an idea of designing an actual "seal" style stamp like they would mark old documents or seal envelopes with approved letterhead.

*Creative Freedom* feel free to explore other uses in other similar styles. Example might a style used with the "LinkedIn" logo using “IN” separate from the primary work linked.

Font Selection & Usage
Sequel font needs to communicate creativity. We initially envision this through the use of a “free flowing feel” with either a cursive or calligraphy pen font/illustration. Alternately this could also be achieved with a thin typeface font that can illustrate the level of delicate thought that goes into our creative approach. *Whichever route you take, the logo must be perceived as confident and assuring to our clients*

Color Theory
We are open to the artists creative use of color and or monochromatic variations. Sequel should be the main focus and MV should be clearly visible but not in any way take attention away from the primary name.

Logo Application
Design needs to communicate the feeling of a modern creative marketing agency. We are open to ideas of playing with usage of letters within the name for usage of an illustration or other imagery.
We favor thin fonts and elegant icons.

Simple Team Building Logo
499 US$
262
entries
65
diseñadores
Global wealth and impact purchasing companies. Want a globe in the logo
US$299
Global umbrella company squiring and purchasing businesses
28
entries
9
designers
Inspiring Logo Needed for Aspiring New Company
$299
Individuals who want to grow from freelancer to a business, or business that want to grow in size from small to a scalab
113
entries
33
designers
A logo for Antiquity
299 $US
We are a consulting company based in Dallas, TX that is veteran owned, operated and employs fellow veterans. Our client
83
entries
25
designer graphistes
Employee Portal Logo for Engineering Company
US$ 299
This logo is for an employee portal. We are an engineering company that does telecom, environmental, and geotechnical. I
227
entries
59
designers
Designing a Logo For Venture Firm Targeting Company Founders Not Investors
$299
Design Brief: We are a venture capital firm that focuses on helping software companies that sell to businesses (SaaS
37
entries
13
designers