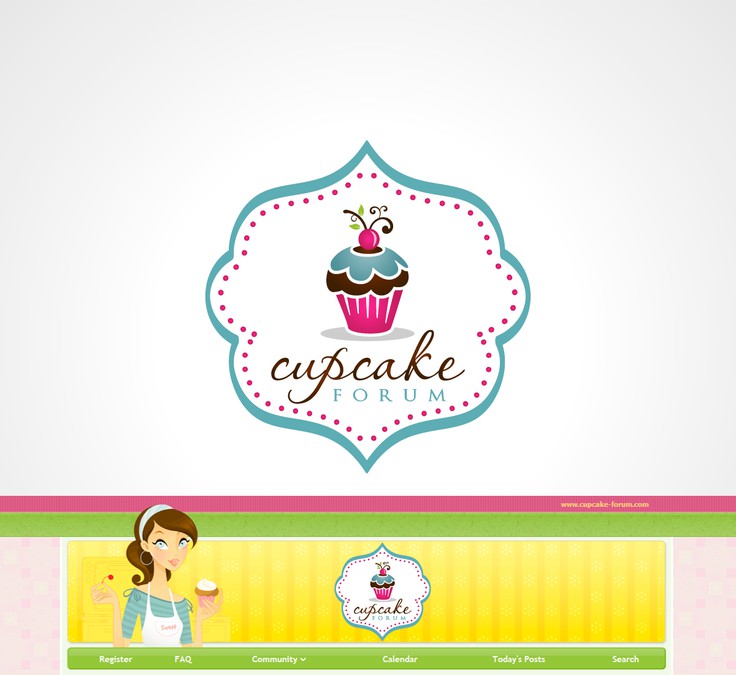 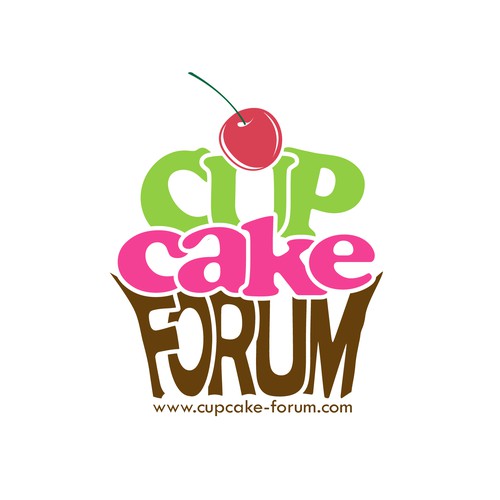 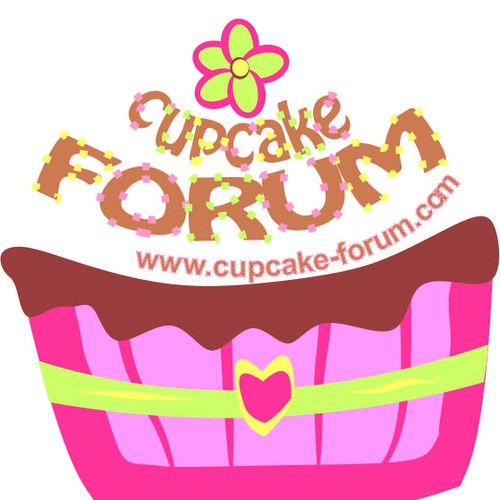 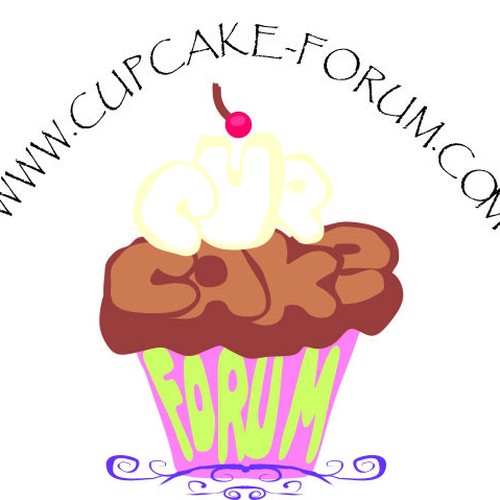 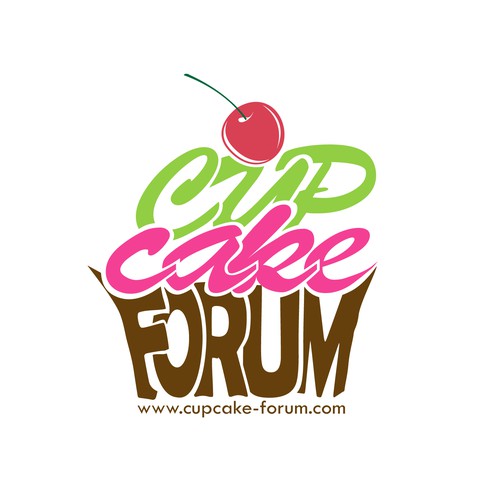 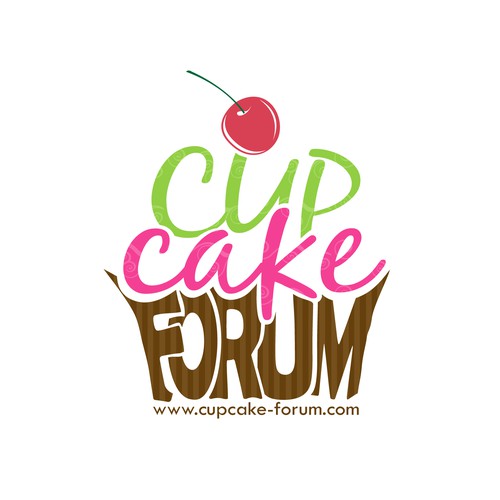 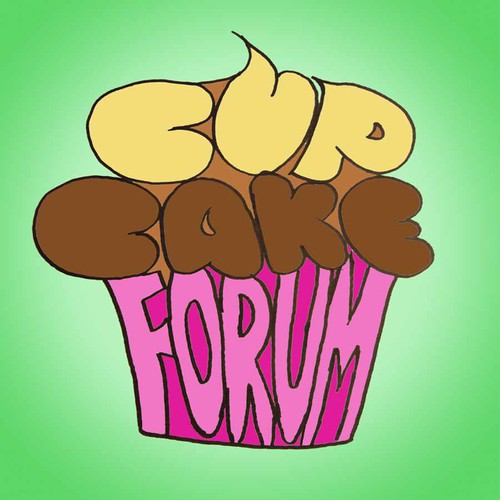 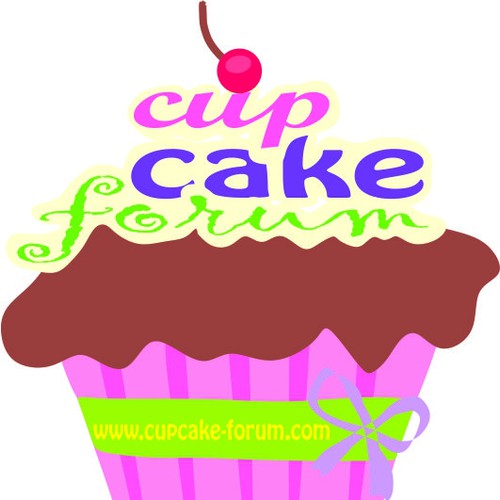 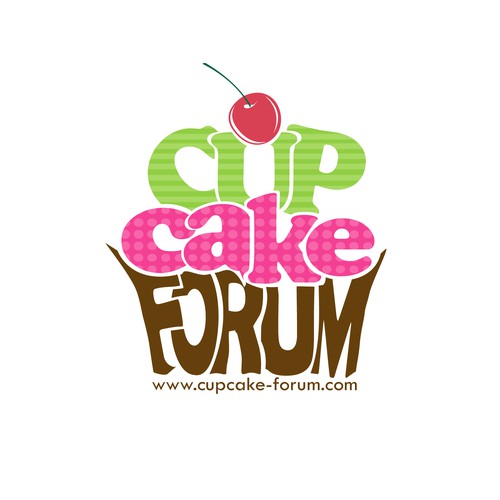 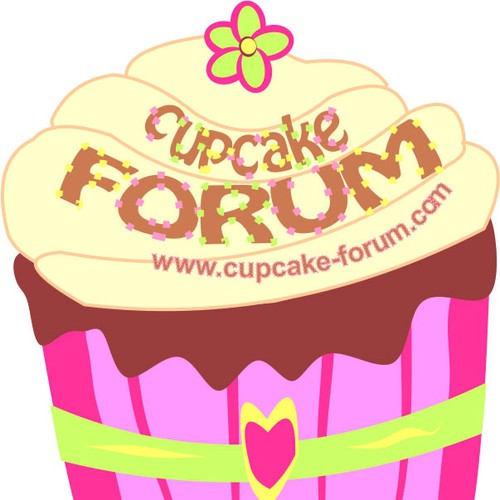 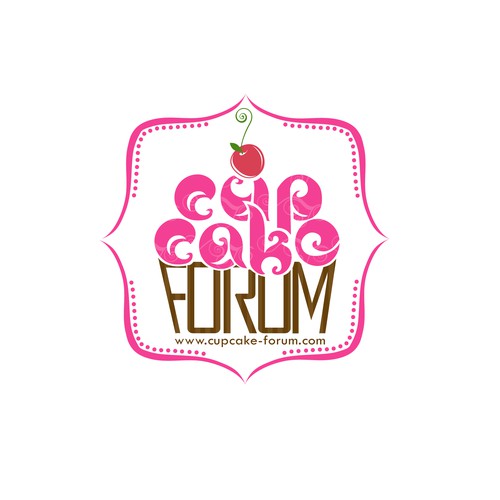 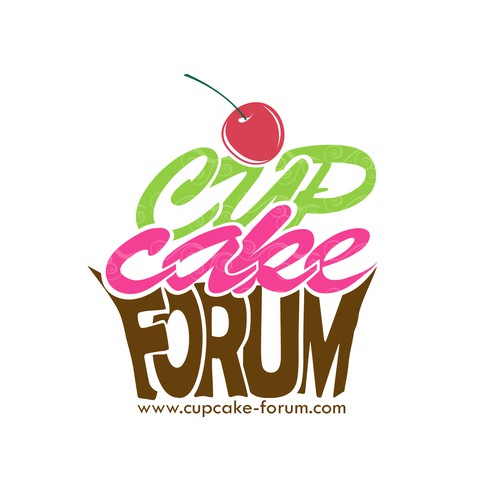 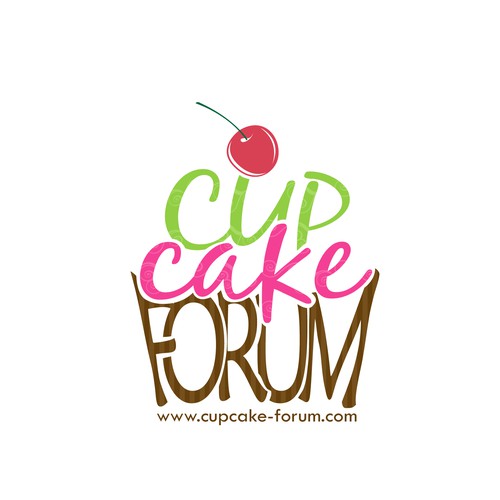 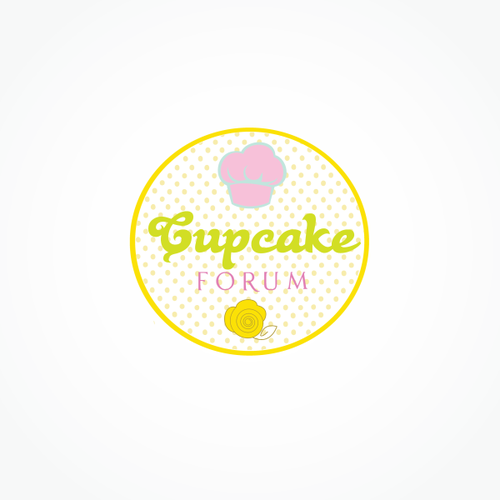 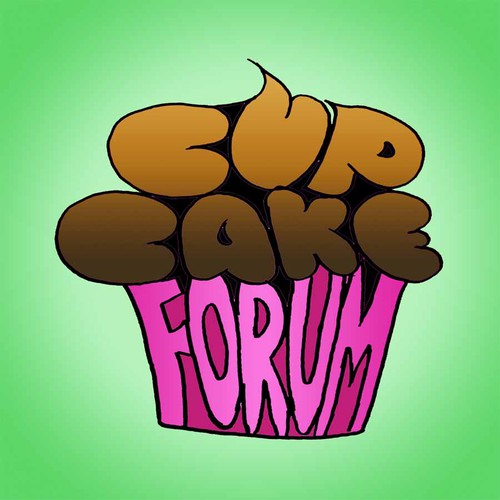 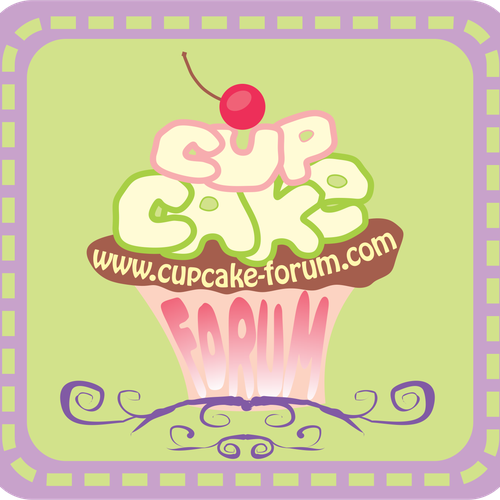 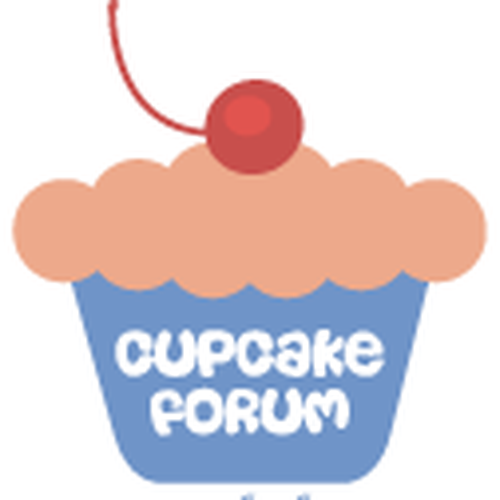 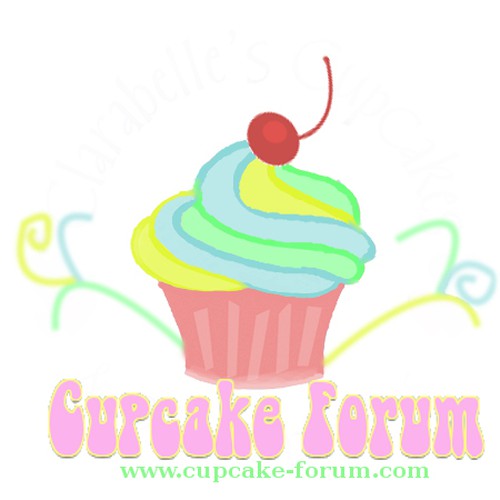 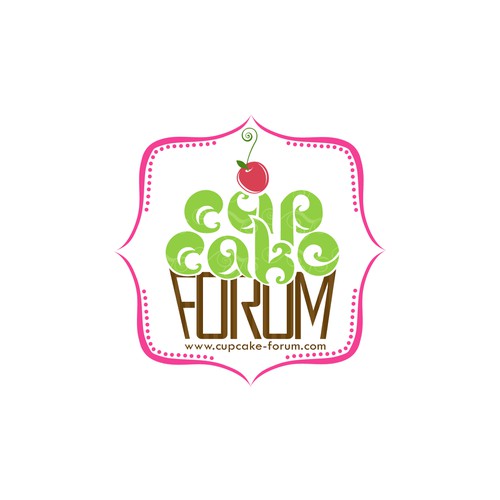 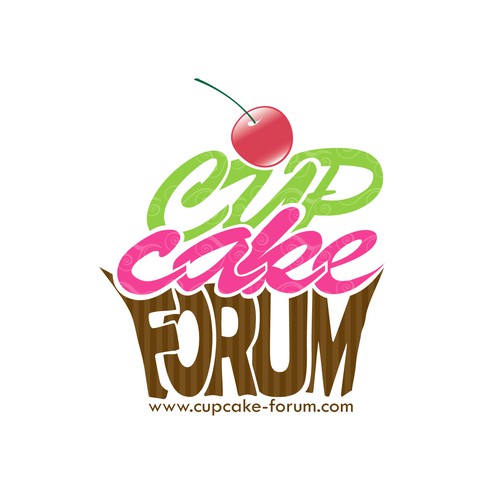 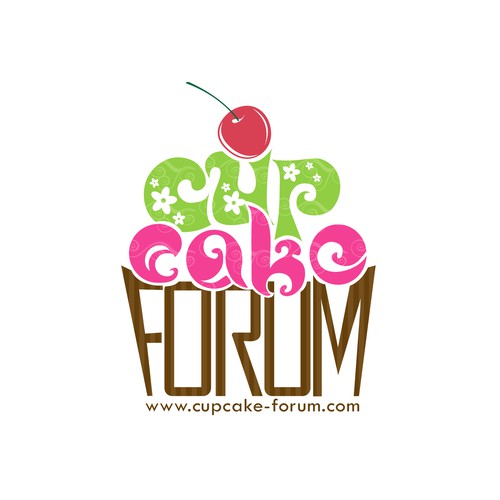 We are two sisters with a number of cooking and dessert-based blogs and forums. One of our favorite sites is getting more attention lately; we're proud of its cute design, but one of the things holding it back is the simple text-based "logo". We'd like to have a sweet logo that matches the design.

Most members of the site are young to middle-age women, though there are a few men. Some are professional bakery owners, while some are there to get cupcake ideas that will wow their families and friends.

And some are just there for the frosting.

First and foremost, the logo must look like it belongs with http://www.cupcake-forum.com/. As long as it fits with that style anything else is negotiable.

Logo should be squarish in orientation, as I intend to place it and several other logos in fancy little frames on the "wallpaper". (that is not to say to logo should be a square, just that it should be roughly equilateral instead of wide) In fact, if your logo already includes the fancy frame around it, I will probably be more likely to choose it.

Must use colors that fit in with/are already present in the existing design.

My original idea was to have the words "Cupcake Forum" arranged in, well, cupcake shape... with "cupcake" written in a fat, swirly script arced on top (or maybe "cup" on one level of frosting, "cake" on another), and "forum" in straight, tall, slightly splayed out letters on the bottom. Naturally my attempts to execute this failed, so I'm open to other ideas as long as they look fabulous with the web page design.

I also considered having a ribbon around the cupcake saying "cupcake-forum.com" so people will know there's a hyphen in the URL, but I'm concerned that might look too busy. And maybe the cupcake could use a cherry or flower on top.

Comienza ahora
Logo For Software Online Community Forum
$ 499
For an online community forum specifically for serious, quality software developers who are also entrepreneurs.
240
entries
76
Designer
This could be the future of online racehorse sales with options to auction multiple items
EUR 269
It’s going to be an online auction for horses to start with but in the end I would like to auction a vary of items
74
entries
21
diseñadores
elegant and modern design to attract builders
399 $AU
We erect and dismantle kwickstage scaffold our main clients/audience are builders
31
entries
4
designer graphistes
Powerful and Professional logo needed for transportation business. show them how I roll!
299 $
Transportation for hire service focused on General transport (work, school, medical appointments), Winery and brewery to
84
entries
9
Designer
Company Logo Eagle, Flags
299 US$
We already have a logo with my company that I work for, Im a Director in the division within the company named "United N
66
entries
6
diseñadores
Logo for Naples Dippers (new olive oil and vinegar dipping condiment)
299 $
The target consumer is anyone who enjoys eating bread and dipping it in oil and vinegar. Foodies, wine lovers, traveler
34
entries
11
Designer