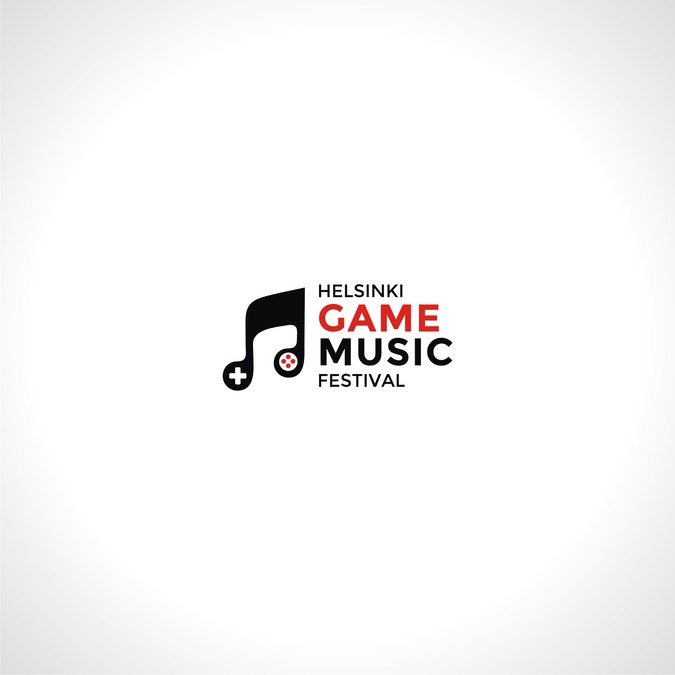 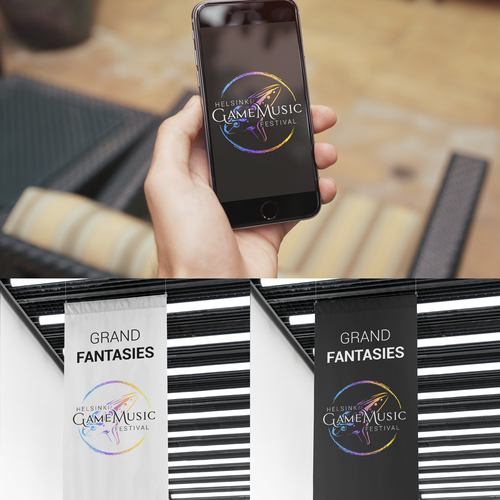 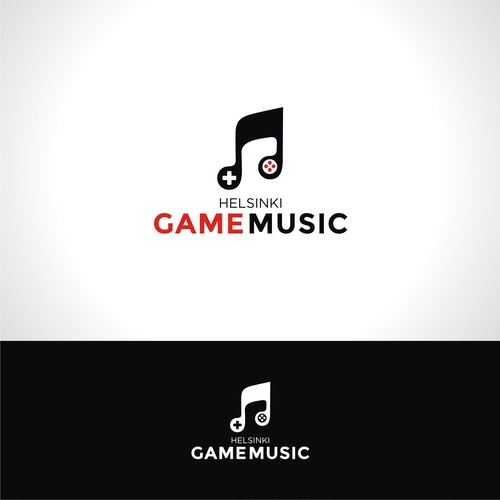 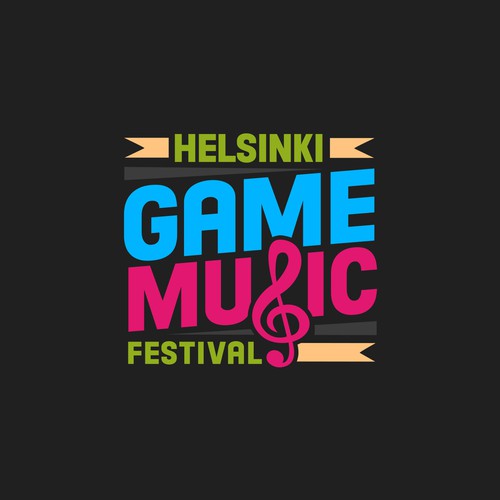 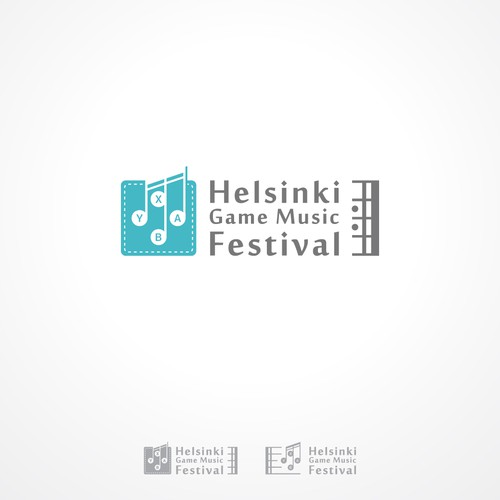 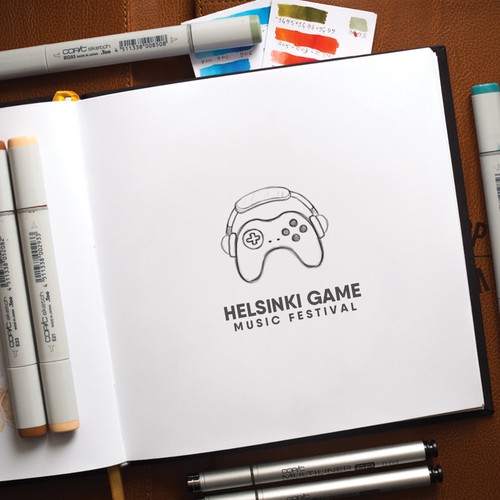 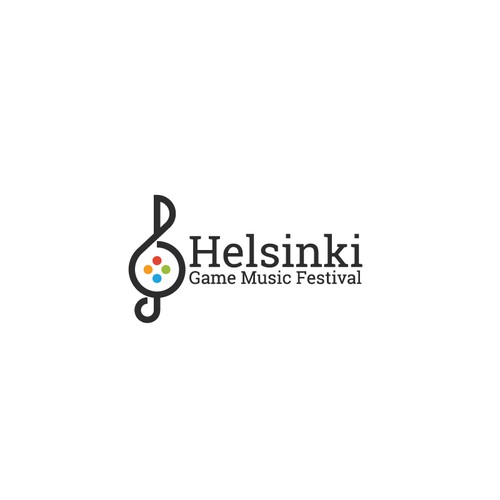 [EDIT: Please make the text "Helsinki Game Music Festival" so, that the words "Game Music" are as big or bigger than the words "Helsinki" or "Festival".]

[EDIT 2: Please don't make the logo too childlike. Colorful is OK, but fonts and shapes (e.g. instruments) should definitely be modern and make an impact for adults. The core age group is 22-35, but it stretches a bit on both ends.]

[EDIT 3: I'm looking for a logo that's IMPACTFUL or even EPIC, so probably complex is better than simple. The fact that an entire festival will be dedicated to video game music will blow people's minds, and the logo should convey the greatness of that. A simple/memorable icon can work, if the whole thing still conveys the heroic greatness of the existence of such a festival.]

[EDIT 4: A new idea is to incorporate movement in the logo. Maybe a hero (a small pixelated hero?) dashing/flying through the text? No one has done this yet, the idea just came to me.]

Helsinki Game Music Festival is a festival dedicated to video game music. Five different artists/bands will perform game music in a semi-classical concert hall (as opposed to a rock stage).

One idea for a logo is to surround the text "Helsinki Game Music Festival" with five things representing each artist. Here are the five artists:
- a choir
- a brass quintet
- a solo pianist
- 2x acoustic guitars, 1x upright bass, 1x singer
- an orchestra with 20 musicians and a conductor

Another idea for the logo is to incorporate video gamey things like:
- a gamepad
- a D-pad
- pixellated characters

A third idea for the logo is to incorporate musical things like:
- a semi circular concert hall stage

But the best logo idea is yours! This will be a blind contest with a guaranteed prize. I would like you to not feel trapped by my ideas, so please create whatever great ideas come to mind.

I'm not sure what kind of a logo I want, but I do know this: The logo will be front and center wherever it goes, so make it impactful and perhaps more detailed than usual modern logos. Since this is a festival, the logo won't be – and shouldn't be – an unintrusive thing in the corner of a website or in a small square avatar box. The logo will be highly visible on the festival booklet cover, on our website, in news articles, etc.

On our website (http://vgmtiger.com/) we use the Roboto font family. So you may want to try that out, but of course you are free to use whatever font you want.

In the future we will need more logos for other concerts. We will also need a proper logo & social media package for the company itself. So hopefully we can find a great designer with this contest, and work with that person in the future too. There won't be a constant stream of design work, not even monthly, but I aim to make this company one of the best and highly thought of game music concert production companies — and at that point there could very well be CD releases and merchandise, which would naturally need a designer.

Entertainment Production Company Needs A Logo
US$ 299
Television and Film Production Services
82
entries
31
designers
Playground equipment company
US$ 499
This logo is to be for my small business rebranding. My company name is Alnwair We manufacture and sell playgound equipm
315
entries
47
designers
Create a cartoony logo for a theatre school
€449
My brand’s target is 30/40 years old people willing to invest their downtime after work in a creative activity. The Ent
89
entries
23
designers
Drop it likes it POPS
US$299
We are a dance studio that incorporates all types of dance from classical ballet to hip hop. We will also have a clothi
248
entries
61
designers
The Worlds Next Biggest Rock Band, You Design the Logo
399 A$
This will be a ROCK BAND logo in the music industry. We are in the process of recording our first album and want a logo
91
entries
25
designer
YouTube Logo - Travel/Adventure Brand
US$ 499
I am a travel/adventure creator on YouTube. My channel name is Exploring with Cody. My audience consists of 18-35 year-o
98
entries
20
designers

Comienza ahora
Dynamic Logo for Independent Film Production Company
US$ 499
We produce original films with great stories, smart budgets, and professional filmmakers at the helm.
124
entries
17
designers
Create a fun logo for a start-up, independent book publisher.
299 $
Underhill Press is an independent book publisher.
78
entries
22
Designer
Sparq A Revolution!
US$299
We will be organizing events to bring people together centered around meeting and engaging with new people and forming m
156
entries
51
designers
Design a whimsical logo for a golf course that will be iconic.
US$499
The country club wants a logo for its shirts, hats, etc. The logo should be something that everybody will find distinct
62
entries
12
designers
World Famous City Event Needs Logo!
CA$669
The Niagara Falls Comic Con is one of Canada's largest celebration of all things pop culture.
44
entries
12
デザイナー数
Royal Range USA - Machine Gun Logo
US$299
Royal Range USA is a premier firearms facility located in Nashville TN. We have the souths largest Machine Gun Rental pr
22
entries
7
designers