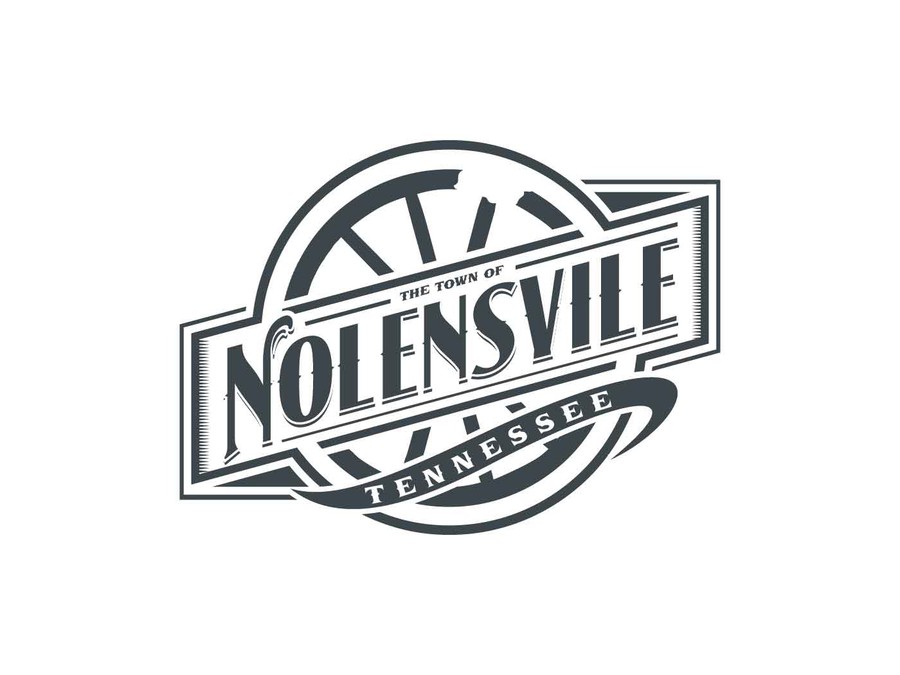 Logo for "the Wheeler House" 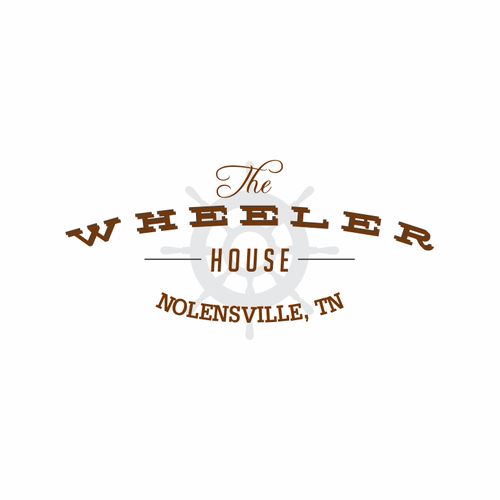 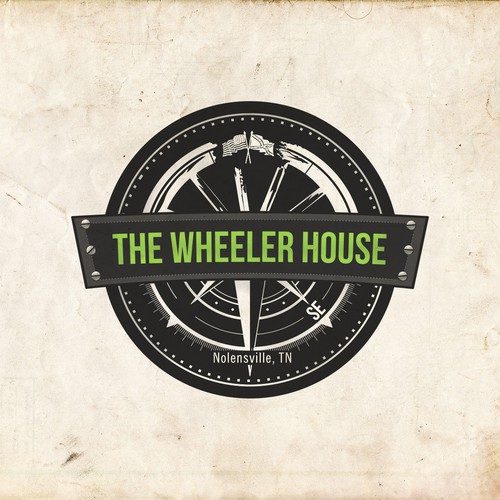 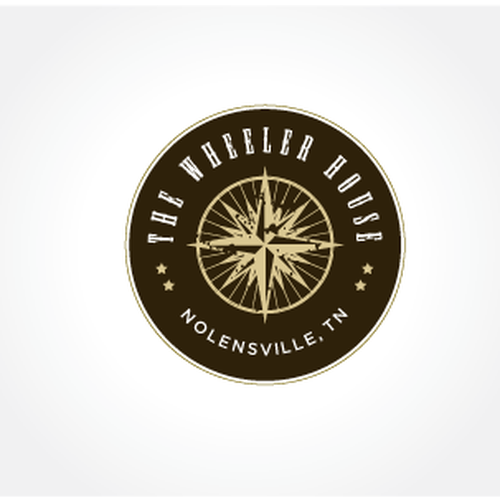 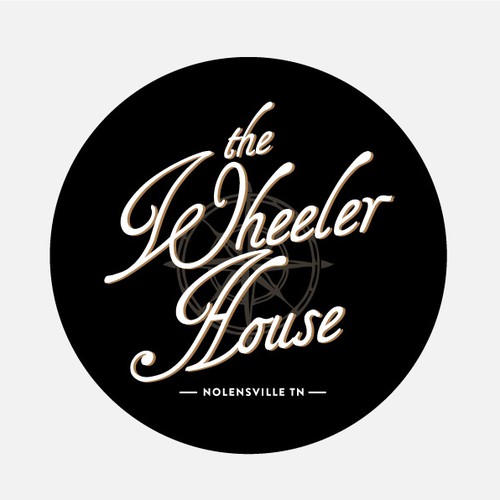 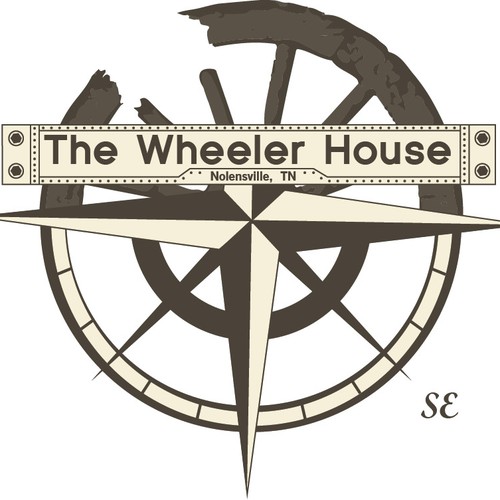 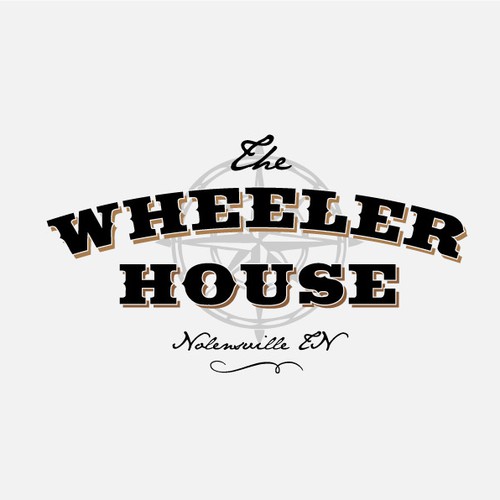 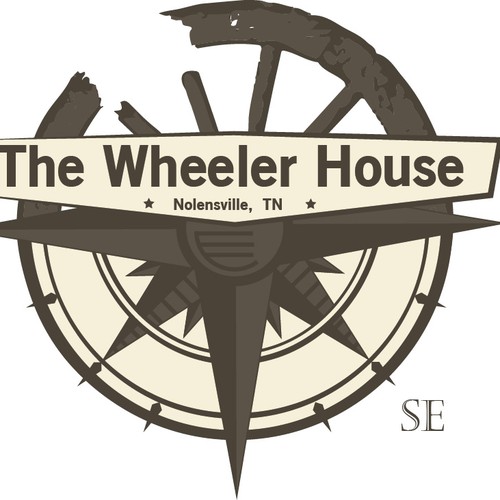 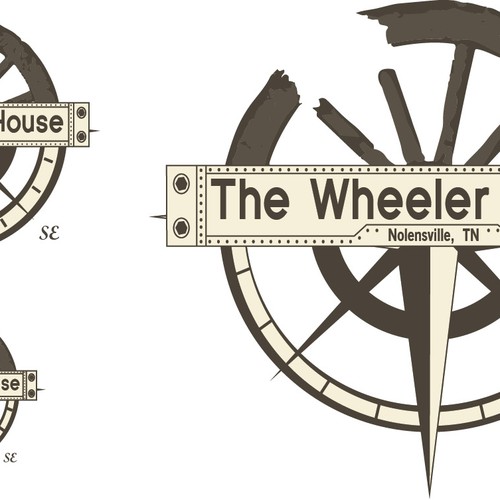 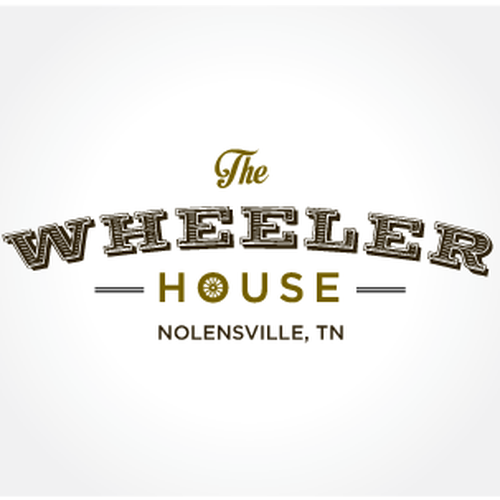 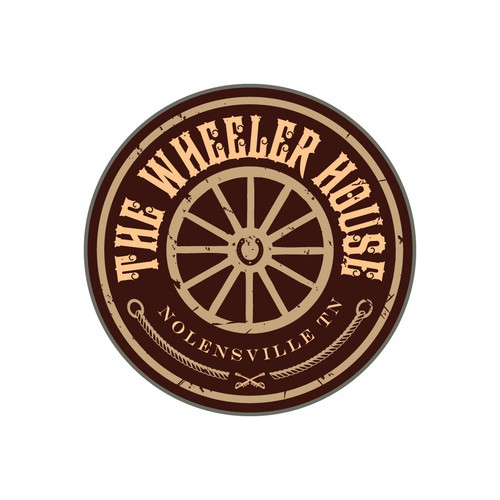 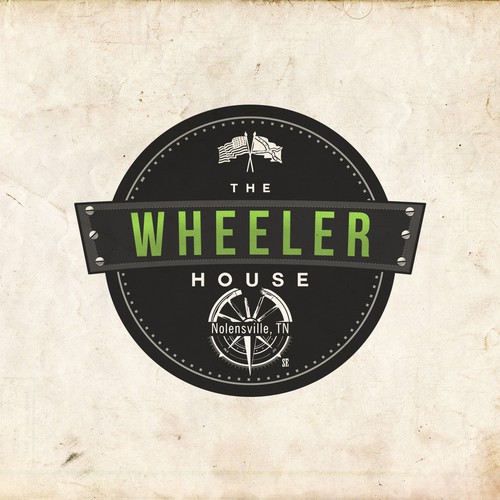 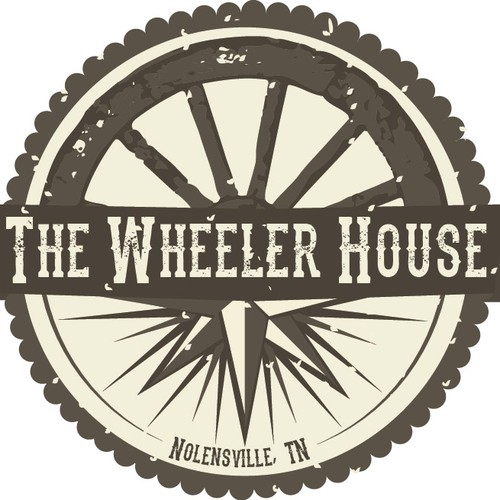 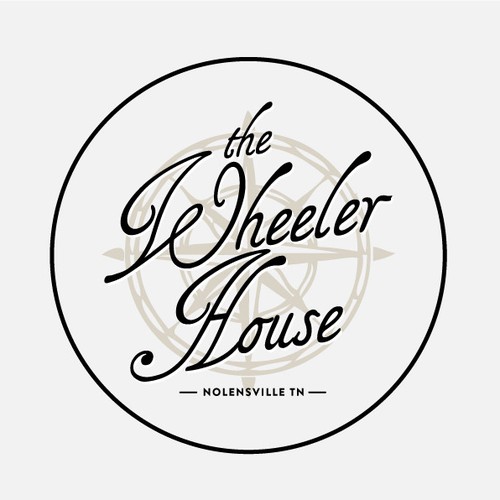 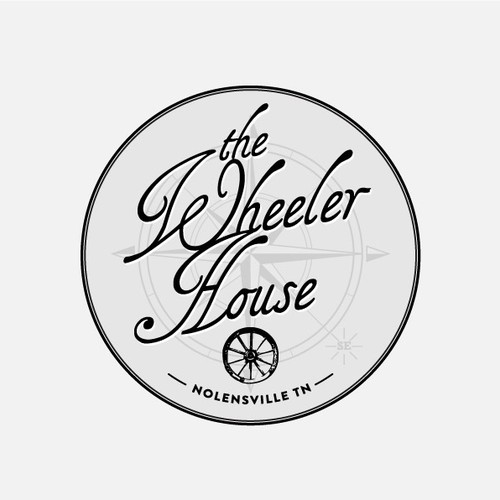 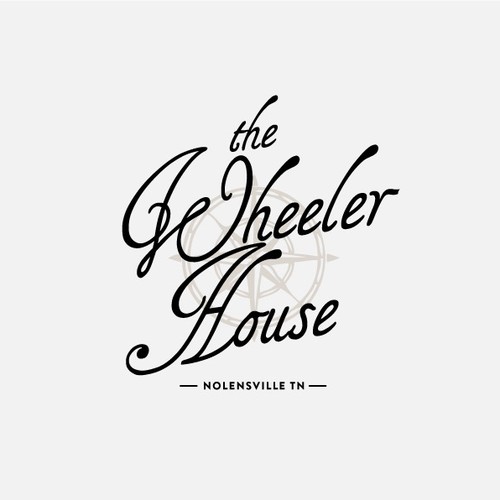 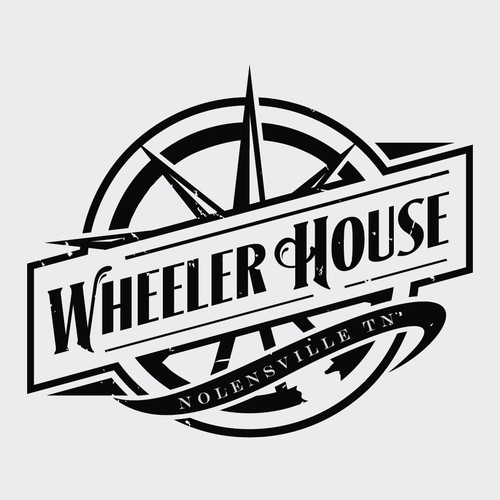 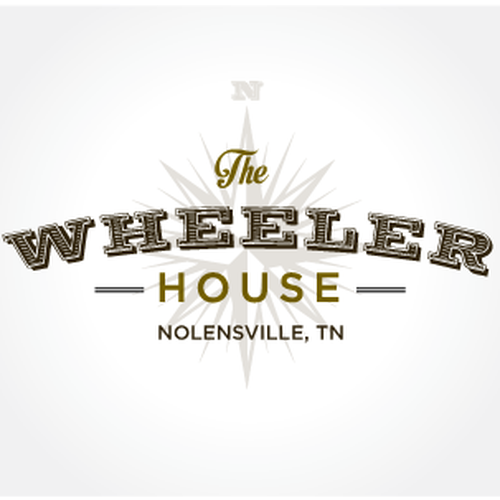 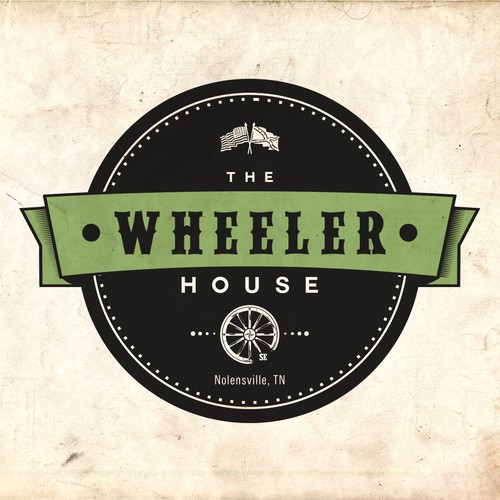 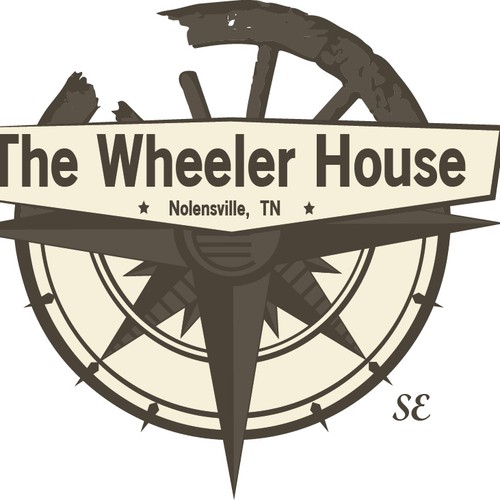 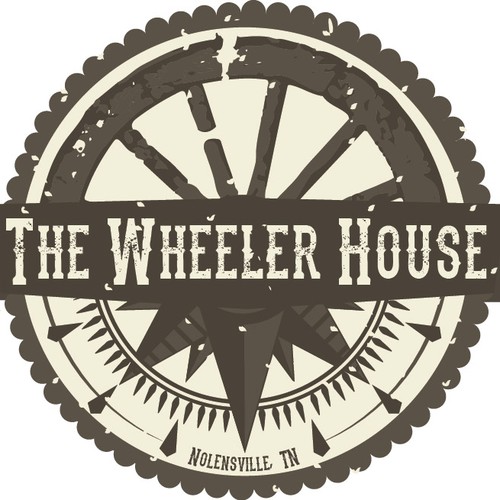 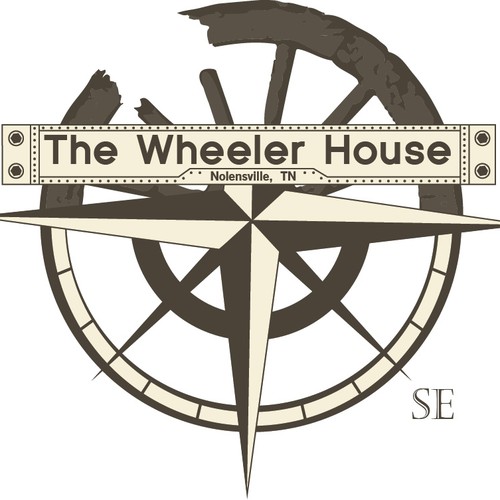 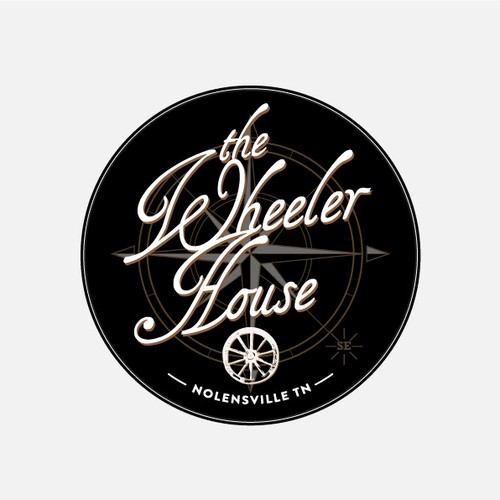 use subtitle Nolensville TN instead of slogan

So the Wheeler house is a historic house build in the late 1800’s in the small town of Nolensville TN. (Just outside Nashville).
The front rooms of the house are filled with really nice antiques, soaps, candles, gift items and other really great retail, the back of the house (the kitchen and the porch) is a small outdoor patio restaurant called “the Back Porch at the Wheeler House” is serves artisan sandwiches, salads, and fresh squeezed lemonade.

We named the house the wheeler house because we could’t find any history on the house, and loved the story of a local Civil War General named Joe Wheeler (see attached text for more info) combined with the fact that the town Nolensville was originally founded by a family traveling through Tennessee on a wagon, when one of the wooden wagon wheels broke…William Nolen (founder and namesake) looked around like the streams the lush forests, abundant wildlife and game, and the fertile soil…he decided not to fix the wagon wheel and make this place his family’s home. So we like the combination of the Civil War General name Wheeler, and the fact that the town was build because a broken Wheel…the use of the word Wheel in the name just seemed to fit in both cases…in fact we are planning on directing questions about the naming of the house as the Wheeler house towards both of these “legends” and letting visitors decide for themselves.

We are looking for a strong logo that works on signage, but also really works on merchandise, we want people to want to take home t-shirts, hoodies, stickers with the Wheeler House, both because of the the place, but also because of the legend and the awesome logo and merch. We would like to incorporate either a civil war style map element or a compass and somehow include elements or hint of an old wooden wagon wheel in the logo that fits on a historical house, but also look clean and cool enough to want to wear on a t-shirt.

Here is a tiny bit of info on General Joe Wheeler and his contribution to Nolensville in the US Civil War….
On December 30, 1862, General Joe Wheeler and his Confederate Cavalry were sent on a raid behind Union lines with instructions to destroy as many Union supplies as possible before the battle the following day. Wheeler's cavalry destroyed wagon trains at Jefferson, Lavergne, and Rock Springs before destroying another supply train at Nolensville and capturing over 200 prisoners.

Design a timeless logo for a style conscious, mass-market, design lead, online lighting retailer. UK company
£ 999
Online retailer for domestic lighting - We are targeting a design conscious UK market, who appreciates well designed, on
144
entries
37
designers
Modern Minimalist Logo for a company that sells seed kits online
USD 299
Seeds kits to grow at home. General audience
128
entries
58
designer
Bring to light some KNU ideas for us!
$ 359
Knu Light Distribution will be providing an ecommerce drop shipping business selling products in a variety of different
93
entries
40
Designer
Established female headband company that needs a logo!
US$ 299
I sell knotted headbands sold primarily to women ages 18-35. Majority of my sales have been targeted towards teachers, b
213
entries
57
designers
Product sourcing business + (Great Logo Design) <-- Searching for!
AU$ 399
We source products (primarily from Asia) to other parts of the world. Our 'customer' base would be manufacturers and who
114
entries
27
designers
The Enchanting Identity of Caledonia Forest!
899 $US
We will be a high-end old world retail and hunting resort.
167
entries
69
designer graphistes