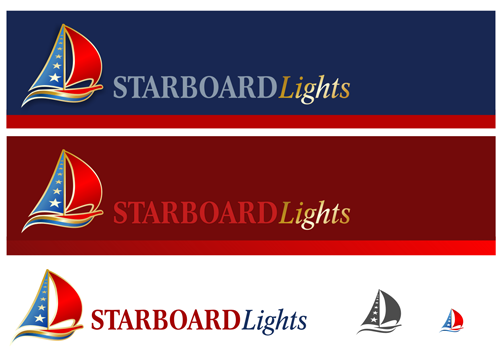 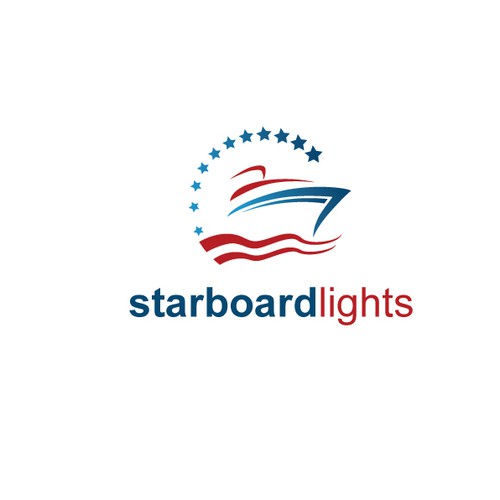 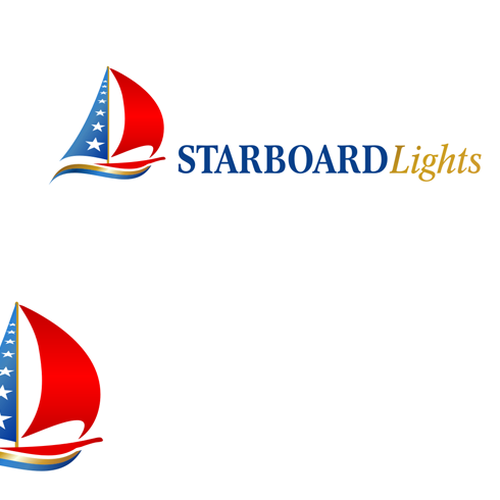 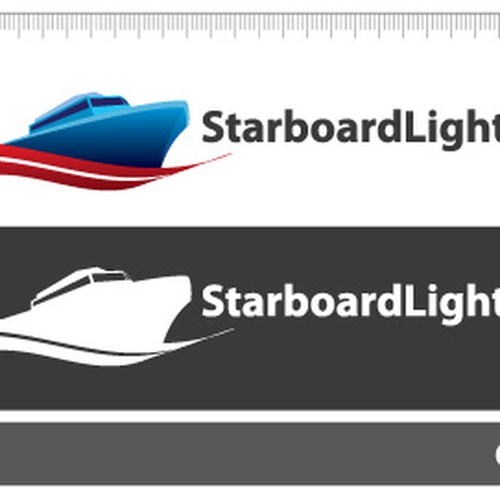 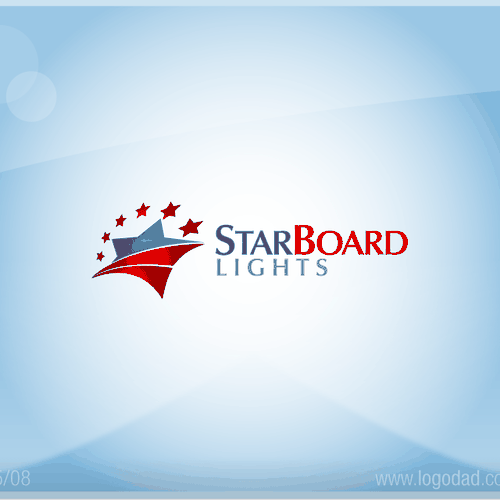 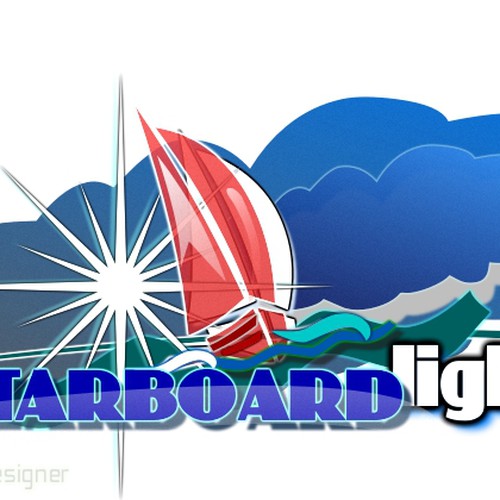 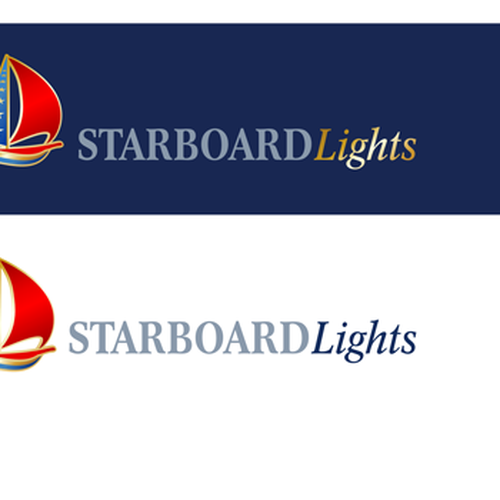 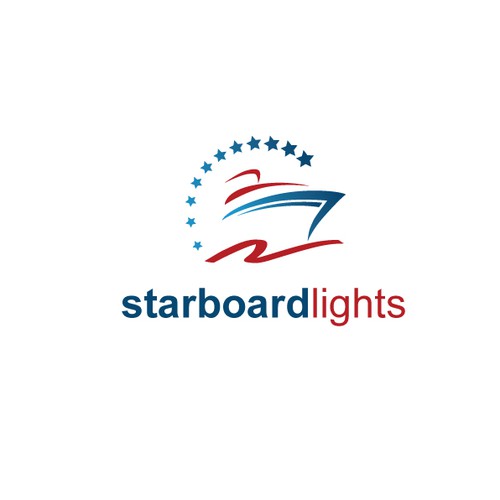 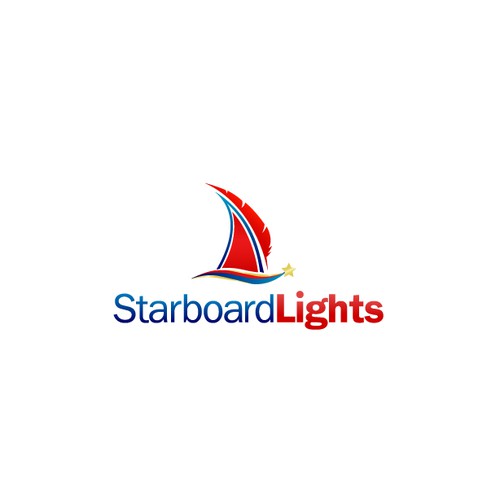 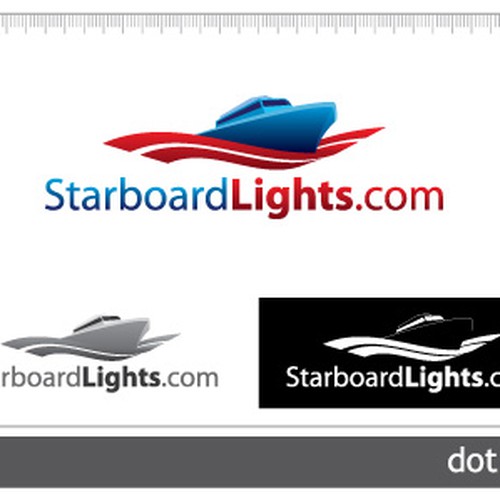 I need a logo for an upcoming news & commentary blog. (Discussion forum, really. Visitors will be encouraged to contribute.) Although the blog's content will likely focus on U.S. politics, my blog's name suggests boating. It's a metaphor, better detailed in the full brief. Can you create a nautical logo with a suggestion of politics? If so, this contest is for you!

When considering a name for the political blog I intend to start, I was careful to stay away from "watchdog" sounding names; that's not the approach I want my blog to take.  I wanted something more suggestive of a "lighthouse" or a "beacon" while avoiding the obvious cliches that spotlights, light bulbs, candles and lighthouses have become.  To me, "starboard lights" carries the right amount of symbolism, while still being a fresh and unique name.  I want a logo with the same traits -- symbolic, fresh and unique.

Since the blog will be primarily political, a patriotic (U.S.) theme seems appropriate, but I want to avoid obvious and uncreative imagery such as the U.S. flag, Liberty Bell, map outlines, etc.  The name "starboard lights" opens nautical possibilities, which I think invites some opportunities for creativity.

When choosing the name starboard lights, I had a concept of my own for a logo: I originally pictured a three-quarter view of a ship making waves as it travels through water.  On closer examination, the ship was suggestive of a star, and the waves suggestive of stripes, as if from a U.S. flag.  I liked the concept, but I was unable to draw a suitable rough sketch.  I could make waves that doubled for wavy stripes, but I could not make a ship suggest a star, and yet still look like a ship.  I still like the concept because it would effectively tie patriotic imagery to the nautical theme, but unless carefully crafted, I fear this idea would break my no-cliche philosophy.  I think the concept has potential, albeit with modifications. (Perhaps abandon the star?  Incorporate a star somewhere else?)  This is why I'm turning to you.  Whether you can take my idea and develop it, or prove an original concept of yours to be better than mine, I'm all for better ideas.

If you have ideas of how to illustrate politics without using "patriotic" elements, I'd love to see designs that incorporate those ideas as well.

As an aside, this logo's primary purpose is in the header of a web site, but in the future I might have a need to use it on cards, shirts or such.  So my preferred format is Photoshop files with images large enough to provide good resolution at larger sizes.  Illustrator's cool, too.

If you have any questions, please ask.  I will check the progress of the contest frequently, and respond quickly to any questions.

- Primarily nautical at first glance, with an embedded hint of U.S. politics
- Clean, perhaps stylized without being too abstract
- If using a ship or boat, show the starboard side (ship or boat is not required)
- Focus on imagery; typography (name of site) is not necessary; it is encouraged only if it effectively supports the imagery
- I will design the web site (layout, color scheme, etc.) around the logo, so dark-on-light vs. light-on-dark, etc., is up to the designer's discretion
- Limit number of colors to two or three; gradients are okay; a design that could also work in monochrome is helpful
- My preference is that blue NOT be the dominant color.  Blue as an accent is fine.  Gold and dark reds (think web color #800000 "burgundy") are preferred.  However, DESIGN TRUMPS COLOR.  If the design screams for blue, I'll accept blue
- Bonus points if the logo (or an element from it) can work as that little bitty icon that browsers display next to a site's url

- Too much imagery; keep it simple
- Cliches: Ballots, ballot boxes, voting booths, the Liberty Bell, a U.S. Flag, (although tasteful use of stars and/or stripes will work)
- It's a blog, not a seafood restaurant.  No fish or anchors, please
- No elephants or donkeys.  I don't want to endorse or appear to endorse any political party
- Typography-only or typography-dominant designs (I'd rather go logo-free and use generic text to title the site)
- Don't feel compelled to unnecessarily emphasize the "lights" from the name "starboard lights."  (Consider "starboard" more important than "lights")