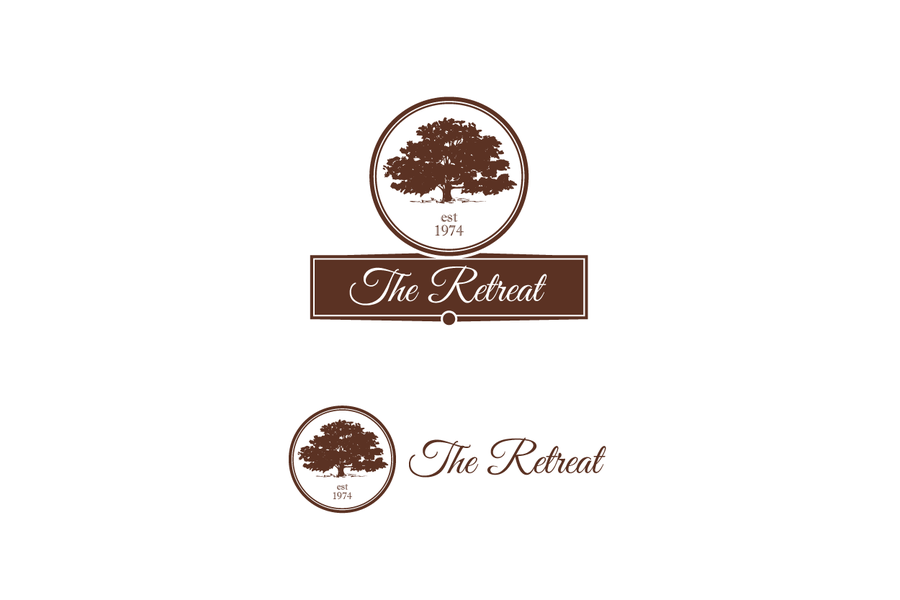 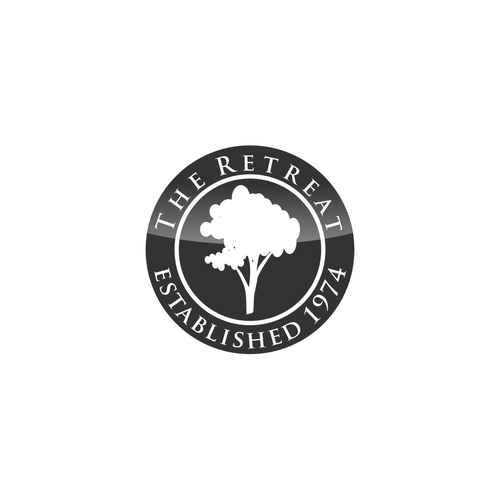 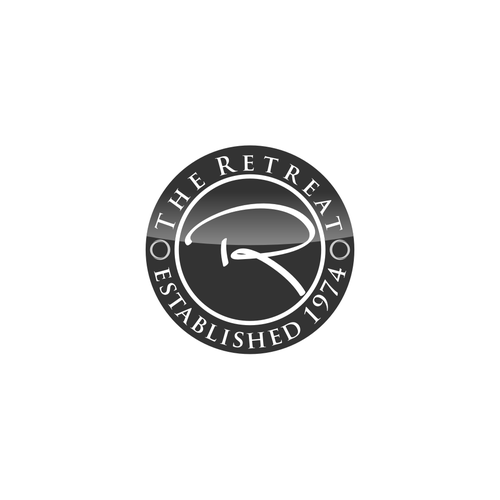 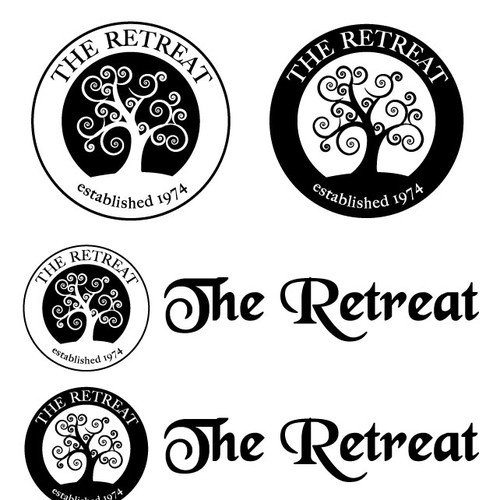 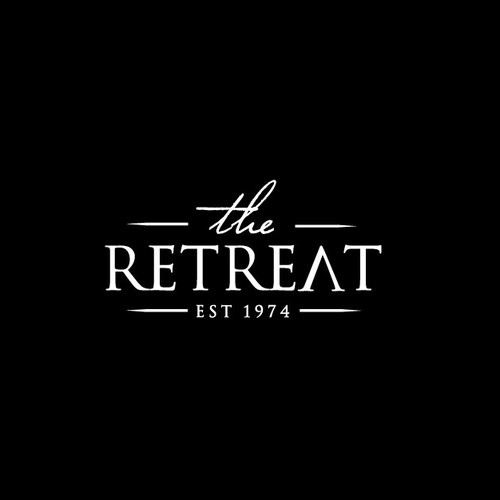 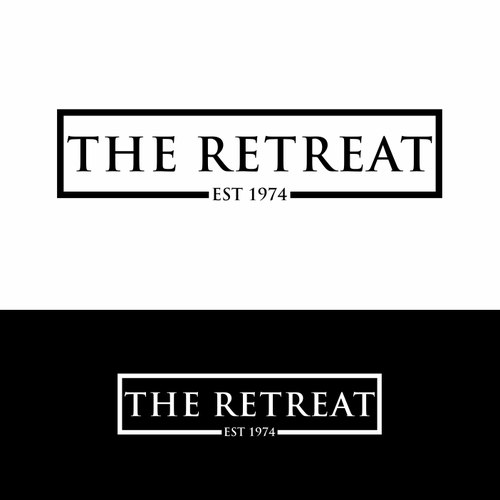 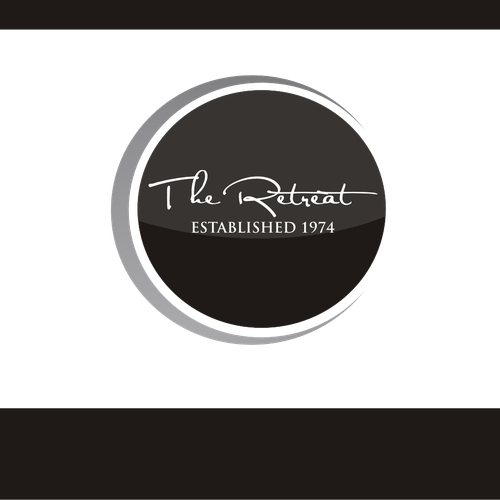 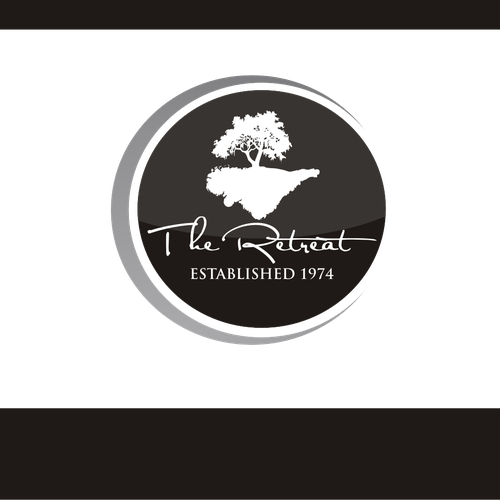 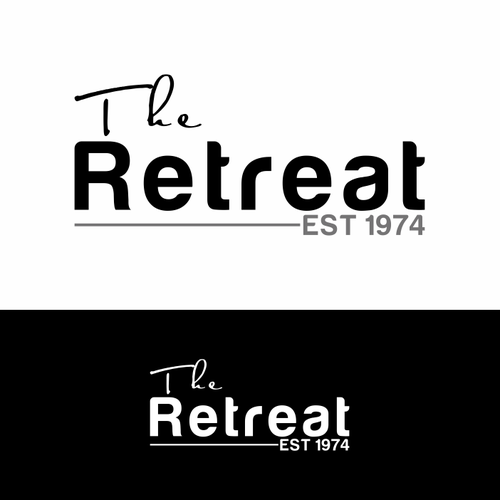 Not absolutely necessary, but potentially 'established 1974'

Our homeowners association is working to update the landscaping and aesthetic of the main entrance to our housing development, which also includes updating the 'signage'. This is an upscale development called 'The Retreat' and consists of large lots and executive homes.

The existing signage, while 'elegant', is dated. As a component of the larger master plan, we are looking to update and slightly modernize the signage at the main entrance, while maintaining the 'upscale' feel. Additionally, it is important that the 'new' design be complimentary to the street signs within the complex (which will not be replaced). As such, we need to maintain some level of 'continuity' with the existing 'theme' throughout the complex (for example, perhaps using a similar or complimentary font).

We think the design element has two distinct components…lettering “The Retreat” with a corresponding ‘medallion’ or ‘button’ (with the tree in the circle). Copy of the ‘original’ medallion will be included with the photos. Ideally, we would like to better tie-together the script-font with the medallion as today, they don't tie-together very well.

Photos are provided to better communicate the existing font / colors that are used on the street signs and the existing lettering and medallion. The winning design will ultimately be provided to a sign manufacture and incorporated into the landscape design. Thank you for your interest in the project!

Design a fun logo for a custom sticker company!
299 USD
We are a custom sticker website. People have a logo or design that they want made into a sticker. They will upload the d
55
entries
17
designer
combination logo using architecture blueprint look in design
$299
We are a coaching company that offers group coaching, online courses, and mentoring for individuals and health providers
17
entries
5
diseñadores
New wave aquatic logo for pool builders
$ 299
We are a swimming pool contractor. We design and build inground pools for residential clients
24
entries
10
Designer
Logo for “UTENSIL”
299 $US
I have online store called “UTENSIL.STORE” and domain “ UTENSIL.STORE” I sell luxury dinner plate , fork , spoon & glas
90
entries
42
designer graphistes
Need a retro, modern, simplistic logo for new synthwave music website
US$ 299
synthwaveio is a website that shares new synthwave music, including new music releases, new artists, etc. We also have a
43
entries
18
diseñadores
*IG SHOUT OUT* - For a big release in the spiritual coaching community
$299
Leading exotic retreats, and coaching clients to their highest potential through the mind, body, and soul.
19
entries
7
デザイナー数