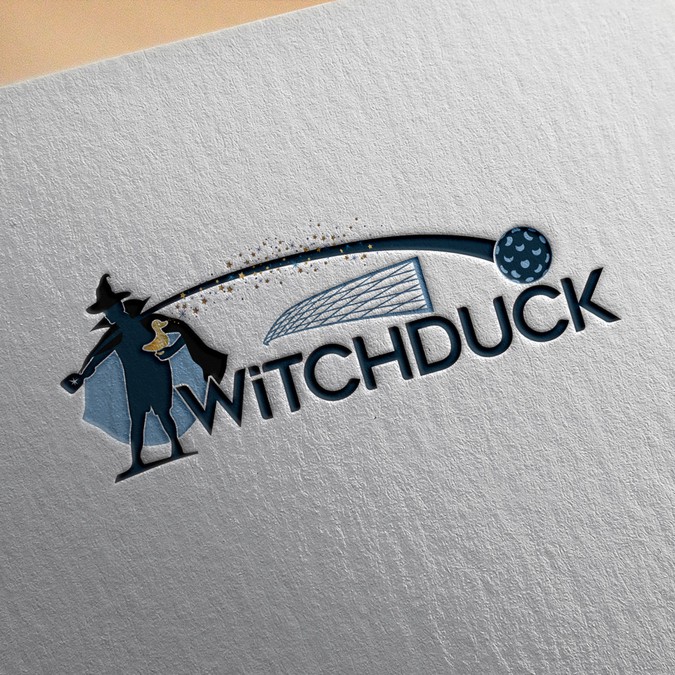 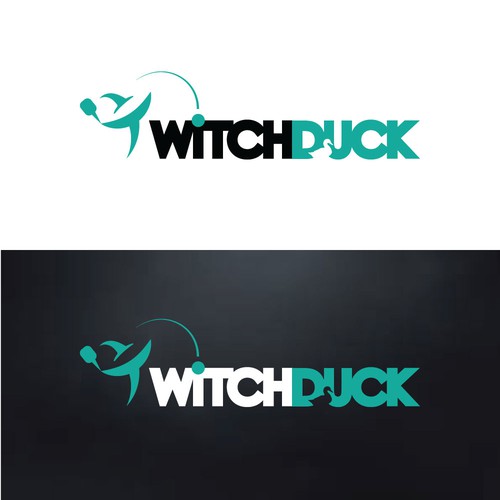 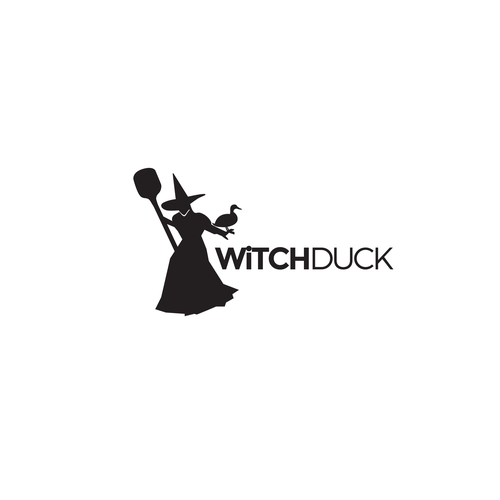 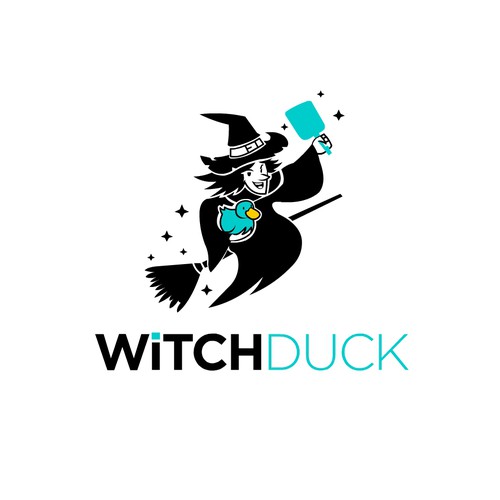 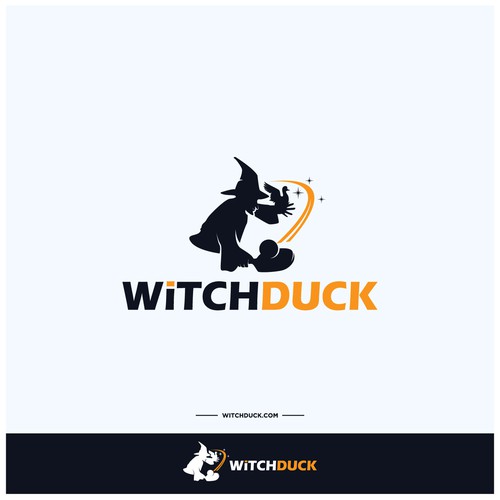 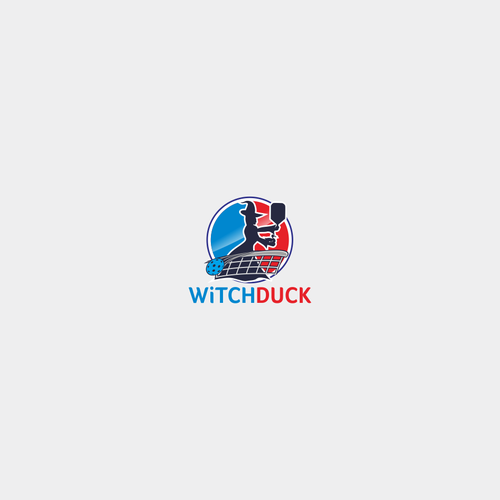 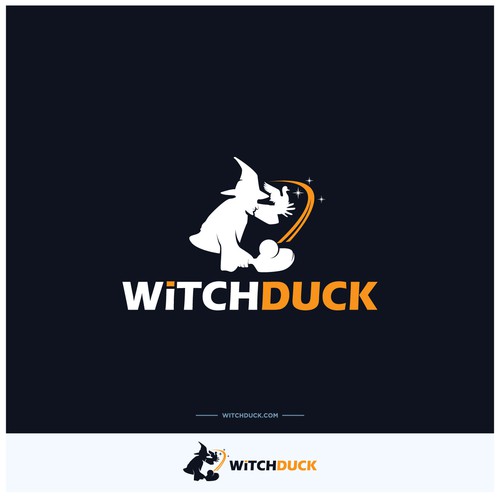 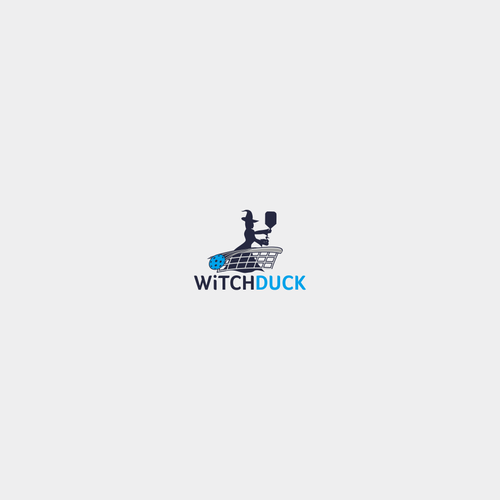 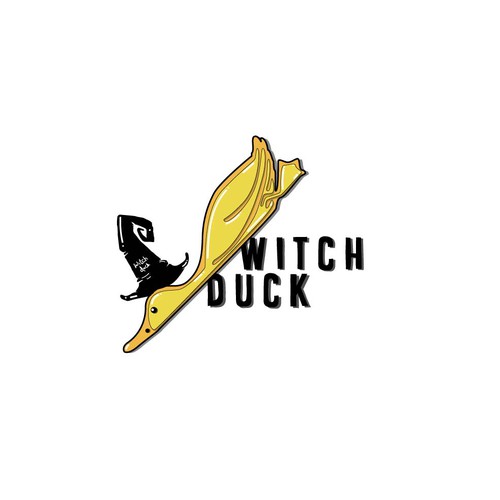 WiTCHDUCK is a brand (TM applied for) for a Pickleball paddle (to begin with). I have since added a 'wrist wrap' (for weight lifting, or racket sports to support the wrist).

Other sports/fitness items might be added to the brand as we go forward.

I would like this 'logo' to be showcased on my website 'brand-page.' I also envision it on a card used as a product insert. It may find itself on a paddle design.

My original (and, so far, Main) product is a pickleball paddle. Let's start with that. The logo may evolve in the future for other products.

I want to avoid a cartoonish looking image of a duck that looks like a witch.

I would rather lean toward a traditional witch -not a cartoon-y witch but, rather a person dressed as witches do, perhaps with a duck under her arm. That is just one idea. I am open for and, welcome others.
***

If we want to carry that theme further, I envision the witch (with her duck) slamming a ball over the net with perfect placement due to her mysterious witch powers.
***

Pickleball is a paddle sport played (mostly) by people 50+ -actually, more retired people play it than any other demographic.

So, in line with the theme begun above, what is most important to an older PB player who can't run all over the court like he/she once could (in the days when he/she was all over the tennis court)?

The answer, I would say, is the ability to make a majority of her shots while only covering a minimal 20% of the court area.

So, maybe this is where the witch comes in with her mysterious powers -the ability to complete these shots with pinpoint accuracy.

So, we are inferring that the use of this WiTCHDUCK paddle will improve one's game.

Let's start there. As I said above, I am open and welcome other ideas.

Leaf jewellery needs a powerful new logo
239 £
Real leaf jewellery and gifts. We take botanical items and turn them into wearable jewellery and gifts.
45
entries
11
designers
Design hip vintage logo for lifestyle brand
299 US$
Rye is a town on the Seacoast of NH. Like to incorporate an anchor of the like and speak to the “Semper Fi” logo of
54
entries
23
designers
Design logo for CUTE STATIONERY stuff
US$299
It is the Brand. We do about the cute stationery things and fancy product such as DIY Sticker and etc. Our target is Fem
165
entries
40
designers
New Leather Manufacturing wanting to show off its non-classical quality leather
US$ 299
Hunting - Handmade Leather Goods - Outdoorsman - Fishing -
77
entries
39
designers
NEW LOGO DESIGN FOR BABY INDUSTRY
$299
I will be manufacturing baby towels , bedding, clothing , target audience will be Baby's
132
entries
58
designers
"ScoRango" - Create logo that stands out for my start-up!
$299
Start-up company selling a variety of products on Amazon. I'll be private labeling specific products and selling them t
231
entries
23
designers

Comienza ahora
Hipster Logo for a new bistro needed
CHF 309
The Seidenspinner (silk moth) is a bistro, which will complement a Sport Shop. The Seidenspinner however will stand alon
42
entries
15
designers
Logo design for CBD SOLUTIONS retail store
$299
We have a retail store called CBD Solutions. This will be for storefront signage, as well as website and brochures. Our
41
entries
19
designers
Whitewater Raft Frame Fabrication and Design
US$ 299
We build handmade custom inflatable raft and cataraft frames and accessories. Our target audience is anyone that loves
87
entries
25
designers
New dispensary needs logo!
$499
We are a new adult-use dispensary in Boulder, CO. USA
87
entries
18
designers
new webshop entrant in competitive market
A$399
eCommerce webshop for electricians & home renovators Customers are generally female & male 25-45. Products sold will
202
entries
59
designers
Create a logo for a subscription box company delivering the Adirondack experience in every box.
US$299
We are a monthly subscription box service from the Adirondack Mountains in New York state. We send our members a box eac
79
entries
10
designers