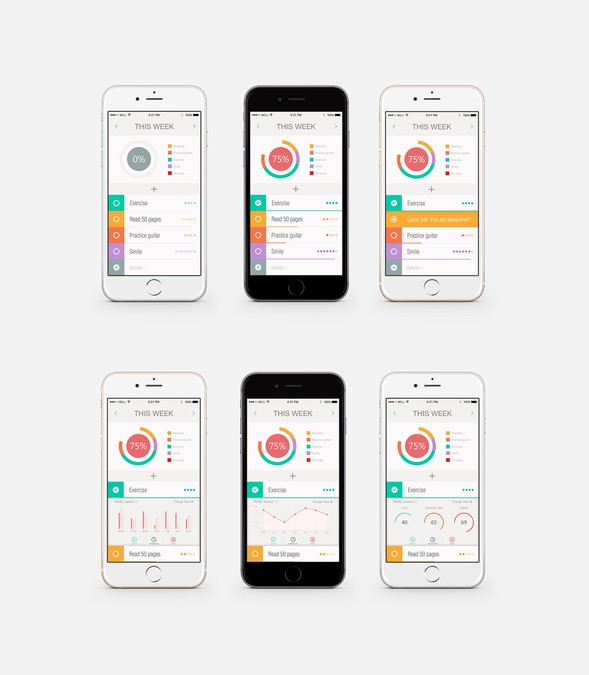 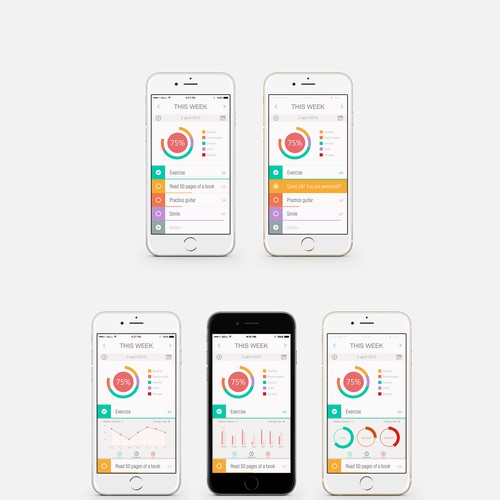 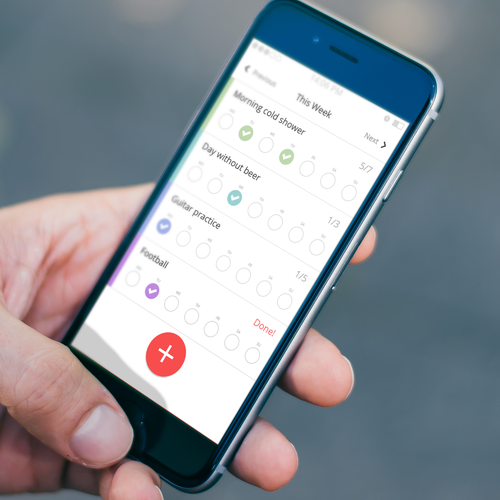 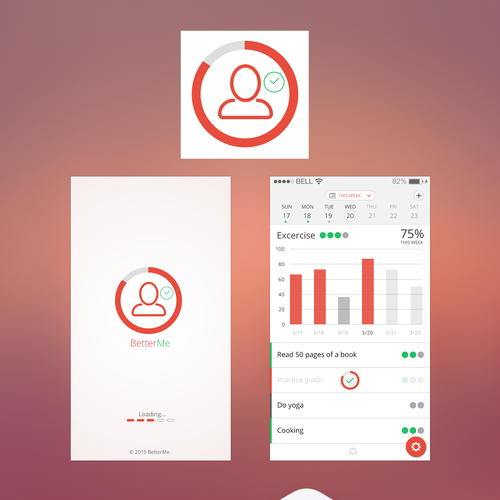 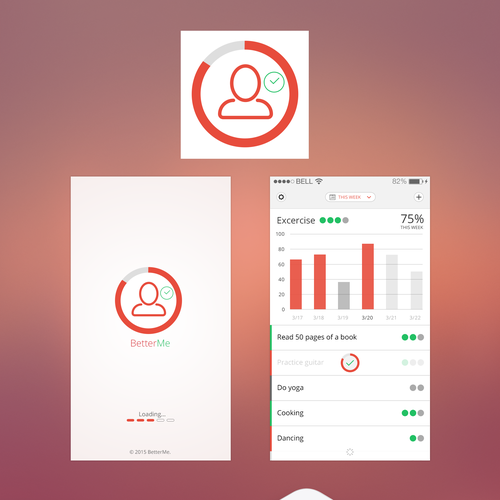 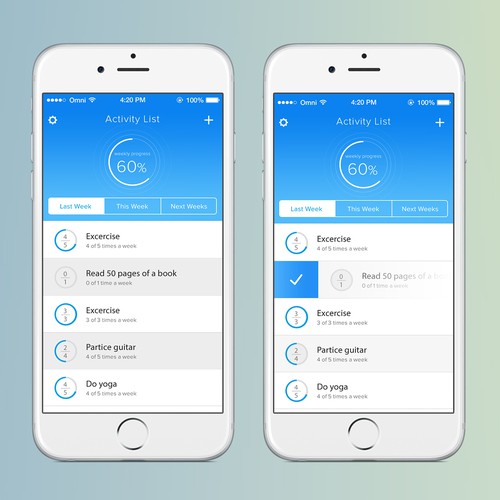 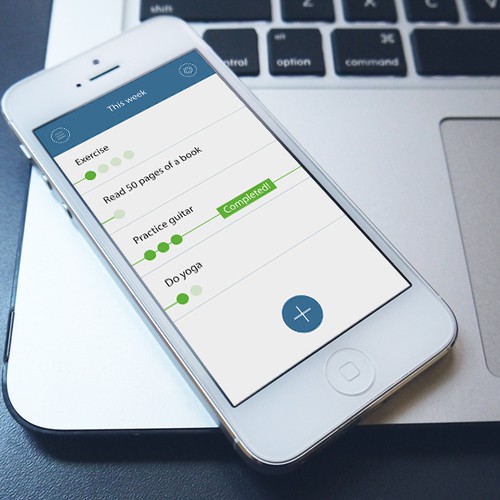 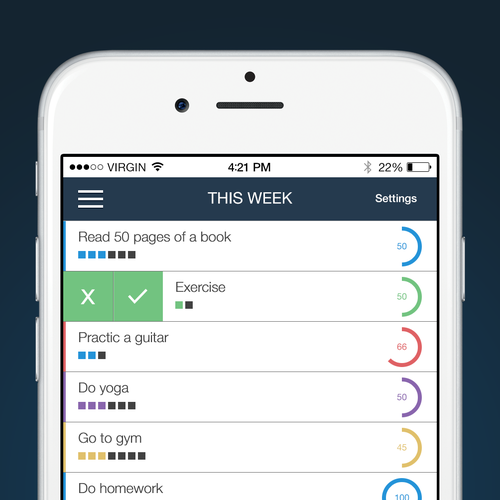 I appreciate simple, flat design. I'd prefer a light/white background.

Here is a Dribble bucket I've been adding to for inspiration:
https://dribbble.com/mnort_9/bucket…nspiration

It is the initial and home screen of the app. By default, it shows actions for the current week. The user can change the week to show actions from previous weeks or next week to define actions for next week.

From this screen, a user needs to be able to mark an action as completed (or +1 if multiple times per week). This is an IMPORTANT animation to give the user a sense of satisfaction and fulfillment.

I'm currently using a swipe right gesture to perform this action (as seen in the attached image). I'm not particularly crazy about it at the moment.. After the user swipes the action, it simply bounces back into place and a grey circle turns green. It's pretty boring and needs some work. I don't expect for a working animation to be designed, but it would be great to get some better ideas for this.

A user can also swipe left on an action to present the Schedule Later screen.

Also on this screen is the user's weekly score/progress. There should be some visual indication showing their weekly progress.

There should also be a settings "cog" icon on this screen.

A user gives the activity a name and specifies how many times per week he/she will perform an action for the activity. The user can choose if an activity will be a repeating habit or a one-time to do.

The attached image is actually a screenshot from the Mailbox app. It will look similar to this.

Luxury Hotel Concierge Tablet App Design
US$ 1.200
Provides in room tablet for all concierge and hotel related items and info
37
entries
16
diseñadores
Design an intuitive, upmarket food delivery app
799 $US
We are a high end restaurant delivery service. Think UberEATS except less $2 fast food burgers, and more $50 steaks. We
45
entries
20
designer graphistes
Design A Cutting Edge/User Friendly App For A Gold Crypto Company!
1 299 $US
Our app allows for buying and selling physical gold, silver, platinum and palladium utilizing blockchain technology.
62
entries
19
designer graphistes
Turn a clunky SaaS dashboard into a clear-to-understand, beautiful UX/UI, enterprise product
2.604 AU$
It measures the opportunity for websites to increase their traffic and revenue from longtail Search. We need both Deskt
17
entries
4
Designer
Delivery Dudes Traffic Control - SHOW WORK to thousands of users in the USA.
US$799
Our app allows restaurant owners and employees to assign times to delivery orders. We are Delivery Dudes. We operate in
39
entries
19
diseñadores
Design a unique app for Digital Nomad insurance.
999 $
A beautiful and functional app that allows you to see your insurance status, talk to customer service and display our FA
46
entries
27
Designer

Comienza ahora
4 screen redesign for an Uber-for-X platform app
CAD 3.704
The app is a platform where ride-sharing service is a pilot application, one of many possible user created services. In
94
entries
28
diseñadores
Mobile Apps/Screens Design for Time Management/Physical Fitness App
2 359 $US
We plan to make an app that creates a fitness workout roadmap, and optimizes the users' daily time, to make better use o
104
entries
28
designer graphistes
Create a lifestyle applications that can help people in these difficult times at home
1.299 $
OER Lifestyle academy This application has to provide a - Trainings schedule tab ( to take on a challenge) - E- le
46
entries
19
Designer
Make the most simple and viral CryptoCurrency App
1 099 $US
It's the fastest and easiest way to buy crypto currency in under 5 min. My overall goal is get a redesign of the wirefra
114
entries
57
designer graphistes
Design a video annotation MacOS app
$799
This applications is a macOS app for video annotation, with which even a non-design-professional can intuitively add ann
115
entries
18
diseñadores
Design App for Millennial Mental Health Practice
1.999 $
The app is a companion to our medical services online. It allows patients to communicate with their psychiatrist, reques
75
entries
25
Designer
Más información sobre diseño de app
Vea como funciona