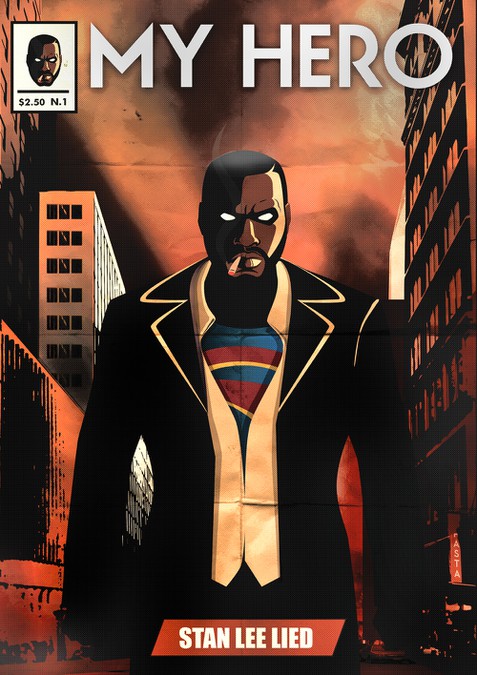 Create a Superhero graphic novel cover for a dramatic novel 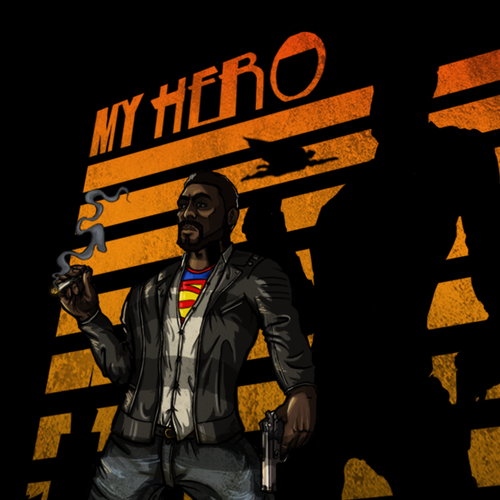 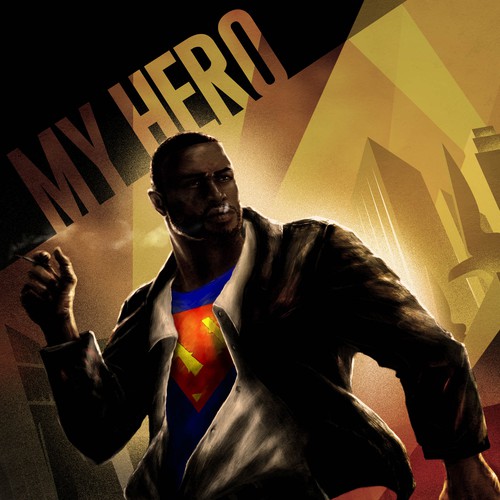 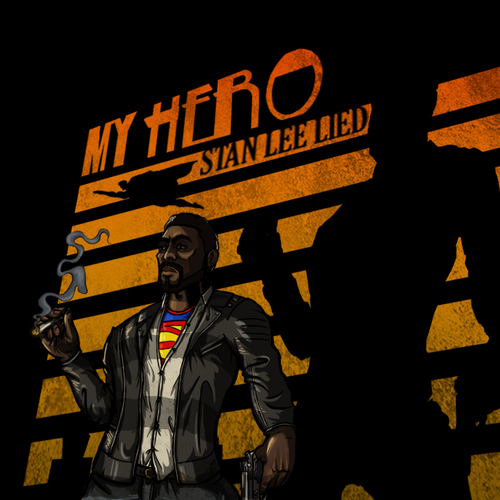 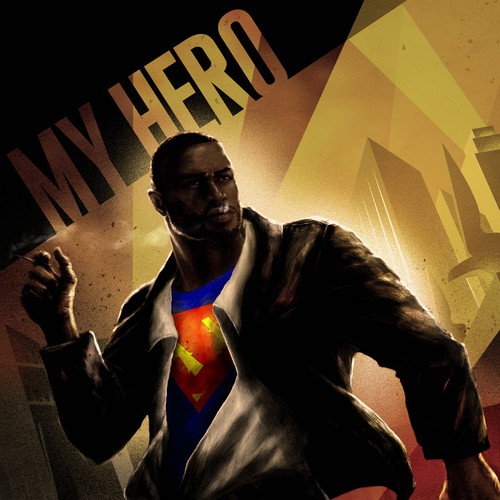 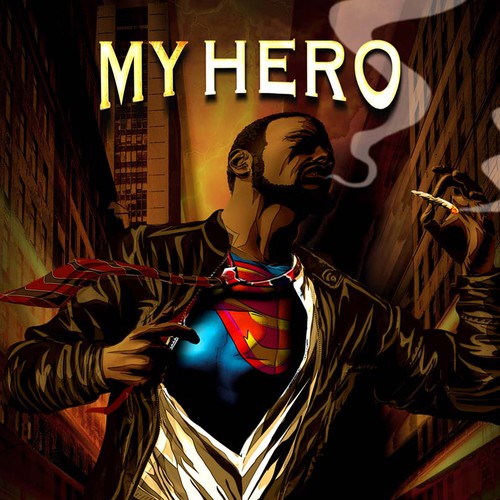 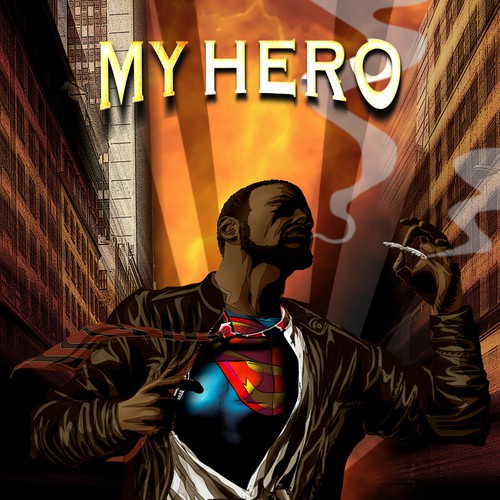 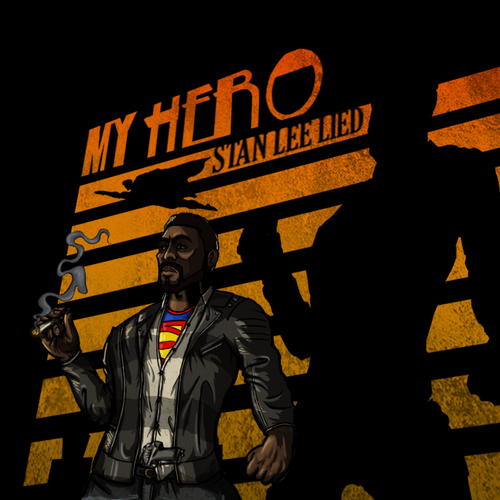 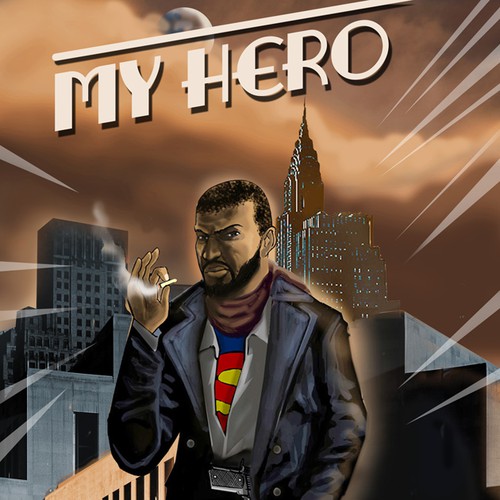 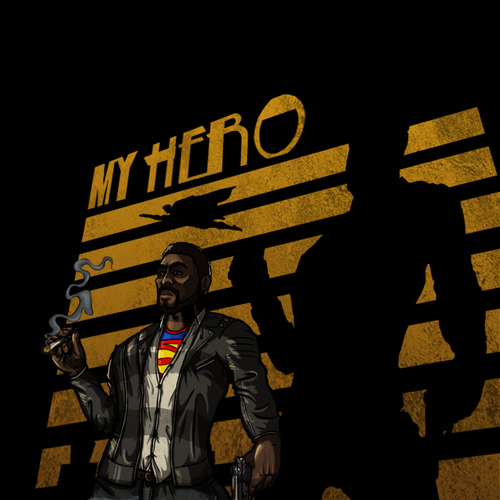 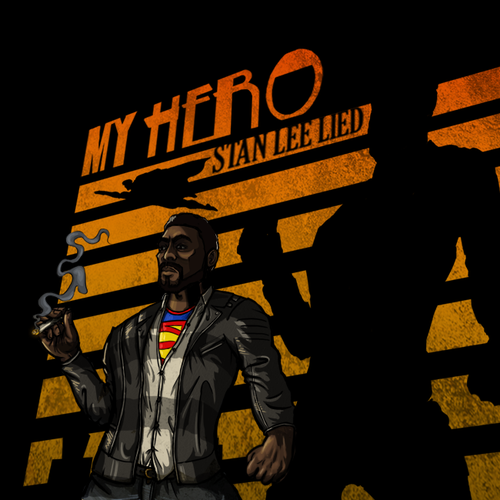 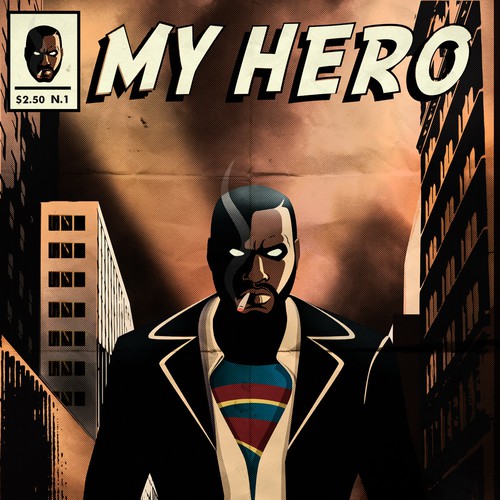 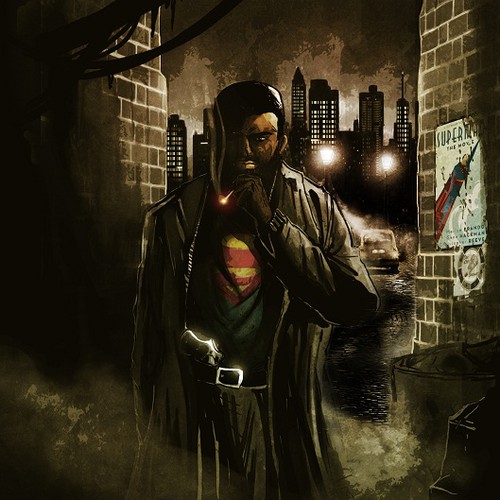 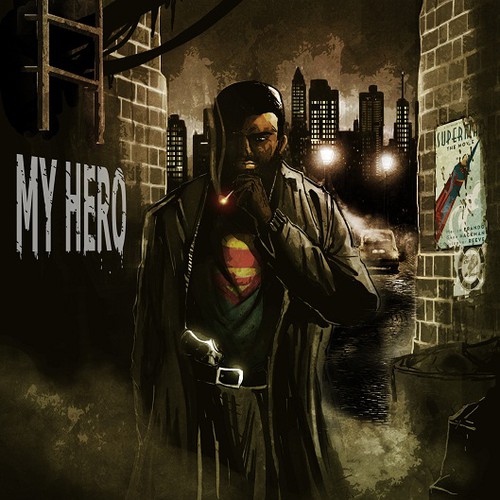 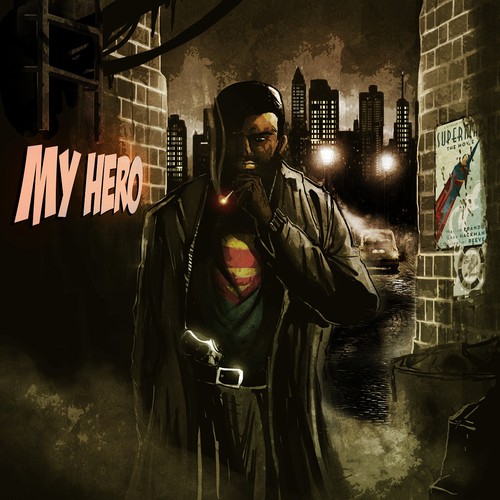 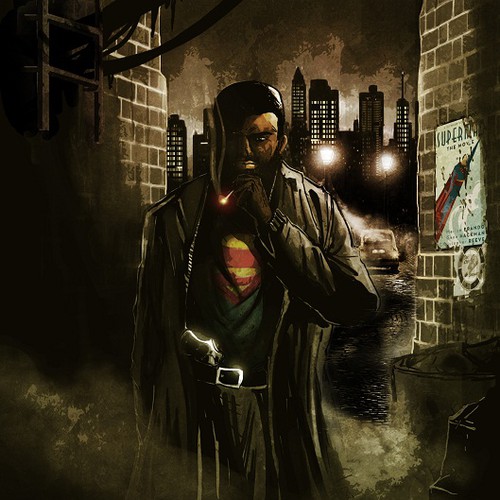 Males below 35 with an interest in the darker aspects of comic books, graphic novels and the superhero genre.

You are creating a Superhero noir poster. The poster needs classic elements of a noir film but with a modern aesthetic that could come with a contemporary graphic novel.

The emphasis of blending the old with the new will come from the characterization of the drawing. We want a Black bearded man in a leather jacket and an opened white button down shirt and dark blue jeans. The preference would be a medium shot fro the middle of the thigh or waist up. The opened button down shirt displays what appears to be the Superman emblem. The emblem will obviously have to be distorted, this is why the button down/jacket is there, to obscure it somewhat. We would need enough of the emblem displayed that gets the idea across that with his prominent positioning and grandiose stature this guy is something a kin to a superhero. The emblem is the subtle star of the show. The red, yellow and blue are the most colorful things on the poster and and it's what we want people to have to notice. We would welcome definite creative freedom in the modifying of them emblem. Your own touch on the iconic Superman logo. We would just want the red yellow and blue color scheme to stay.

Staying with the neo-noir element the man must be smoking a marijuana joint. The smoke blows from his mouth as he looks away and his right hand is on the way down from taking a toke. A gun can be seen sticking out of his black leather jacket, highlighted by his white shirt. The gun can be in his other hand too if that becomes better looking.

The man must be standing in front of some kind of urban noir background. Something that highlights the classic noir sense without taking too much attention from our main character. Streetlights illuminating the puddles on the pavement, brick walled alleys etc.

We don't want all of the man's bearded face to be displayed. We want to evoke mystery with some of his face being distorted through shadowing. We are open to different background displays that highlight the urbanization of the setting. We just do not want the poster to be too complicated. Too many images will likely hurt this.

If the visual of the man is still difficult to conceptualize, think of someone like Alonzo Harris (Denzel from Training Day) meeting the setting of Blade Runner. In fact, I have attached a poster from Blade Runner that I believe is a great reference to the feel we are going for.

The words "My Hero" have to appear on the poster. It has to appear somewhere that is easy to read. It does not have to take up too much space but it needs to be legible.

Comienza ahora
Create a key to the Gates of Hell. Let your creative darkness loose!
249 GBP
Thriller fiction author - for fans of Stephen King, James Rollins, Dan Brown,...
124
entries
48
diseñadores
Design of BACK of playing cards (for magician)
€509
I run this project as a professional magician in Vienna, Austria, and London, UK. My audience are all kinds of peopl...
52
entries
22
designers
Design a fun and lively brochure map for on-campus galleries!
549 $US
We are a visual arts student organization. We prepare on campus visual arts events....
12
entries
5
designer graphistes
Custom Art Project
$349
Not applicable
7
entries
6
designers
Marble and Slate Design
US$ 349
Large format digital printing.
18
entries
11
designers
Art for music
US$899
A music project that has been going on for over 15 years, but never released any music. The target audience is people th
82
entries
24
designers
Más información sobre diseño de arte o ilustración
Vea como funciona