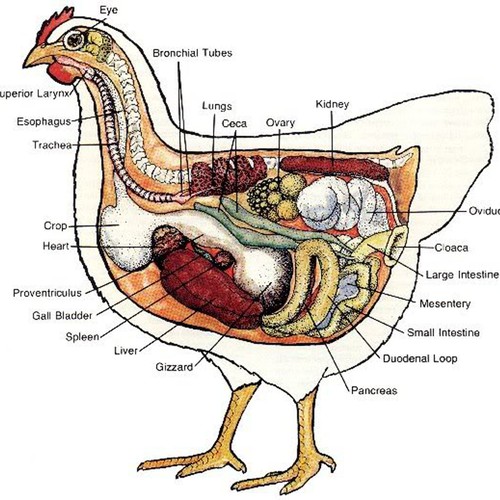 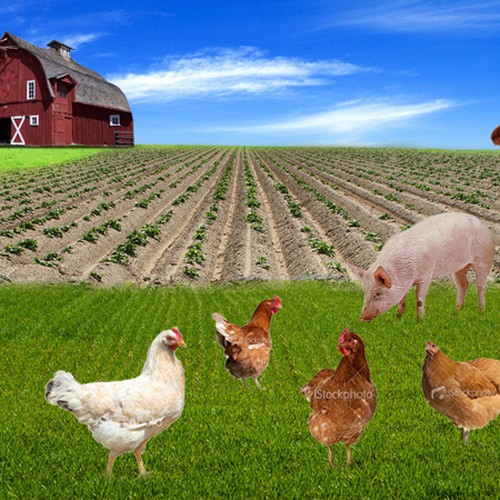 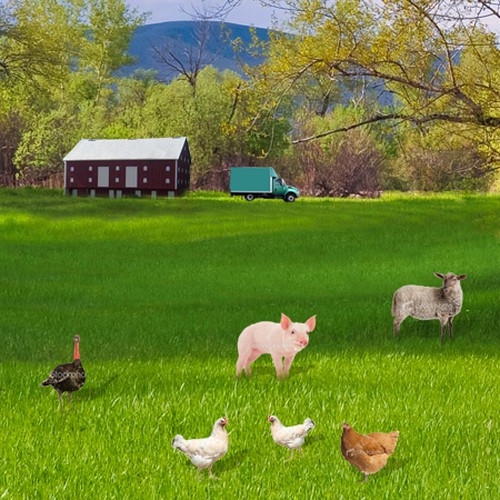 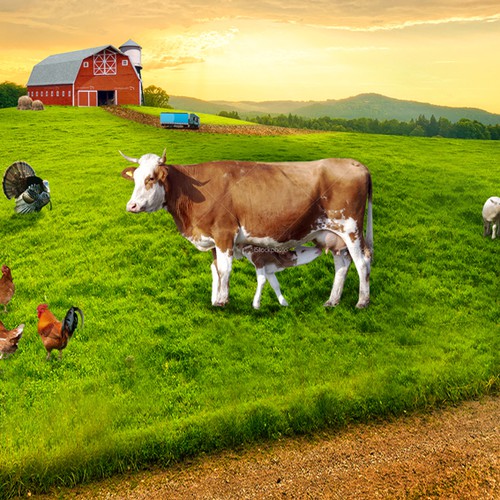 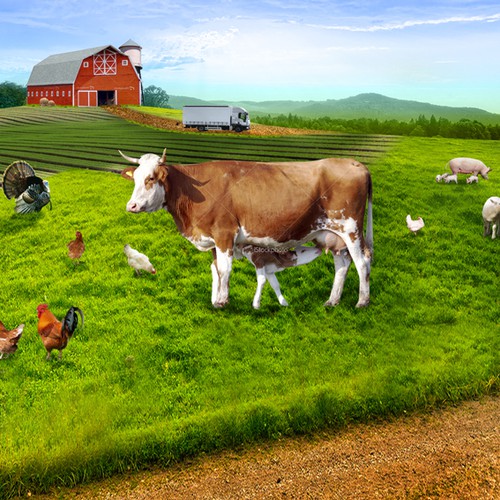 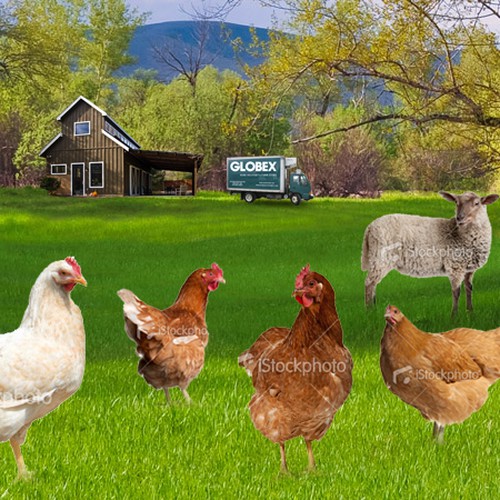 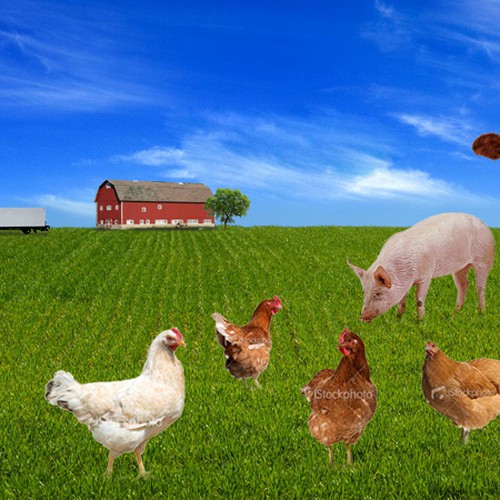 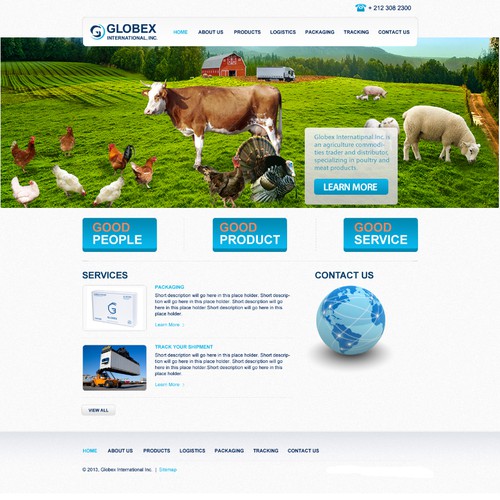 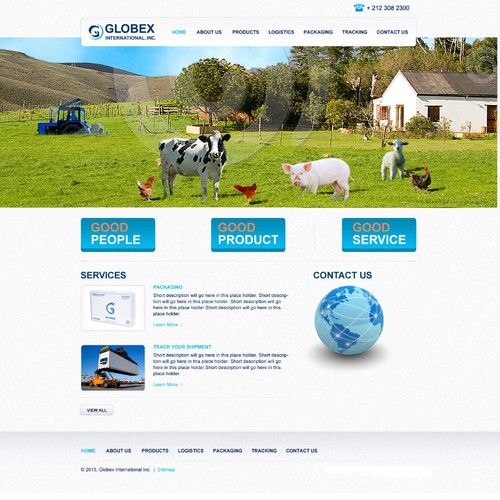 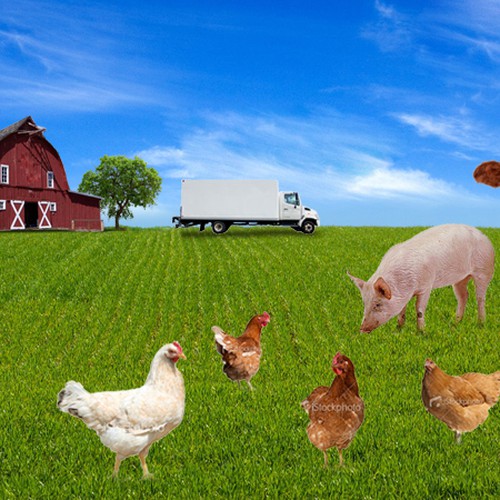 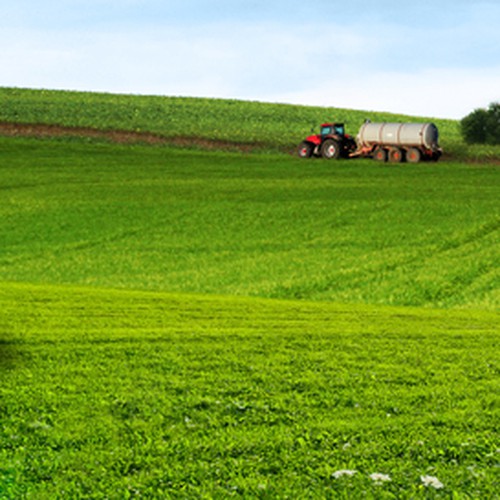 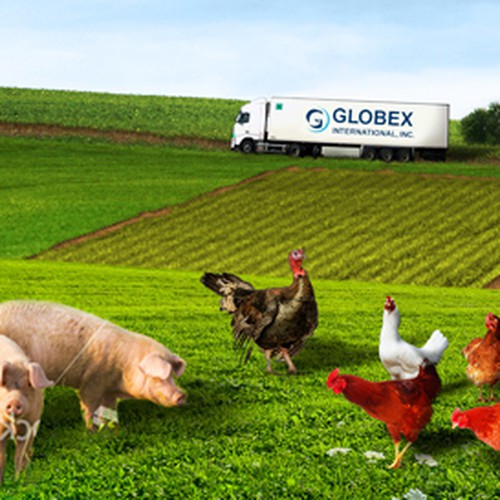 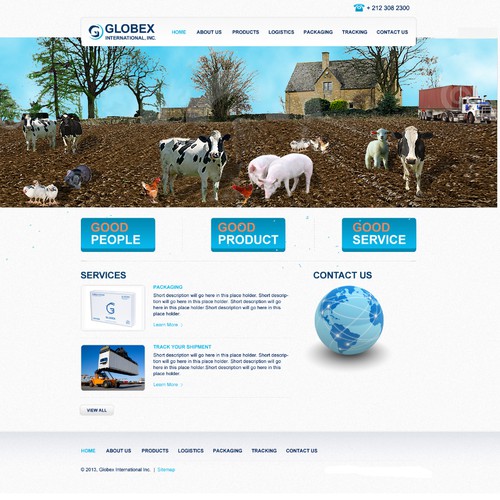 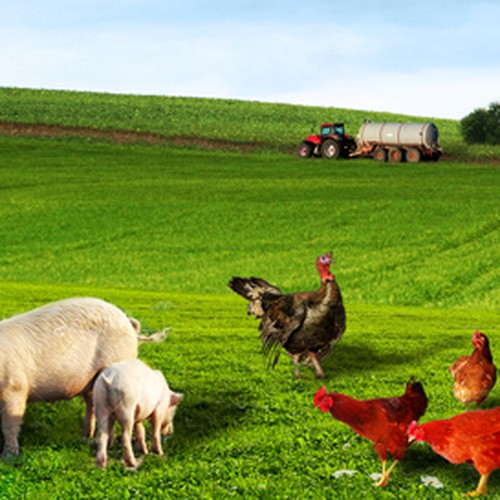 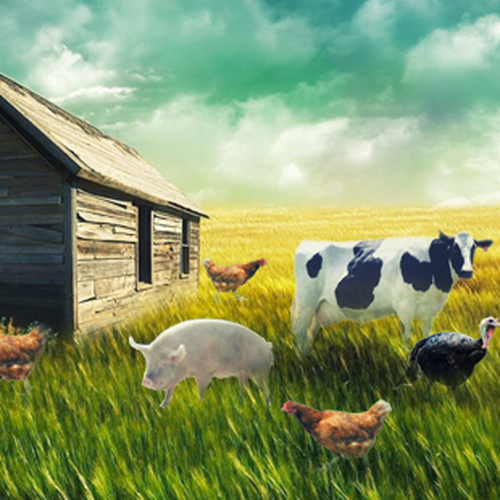 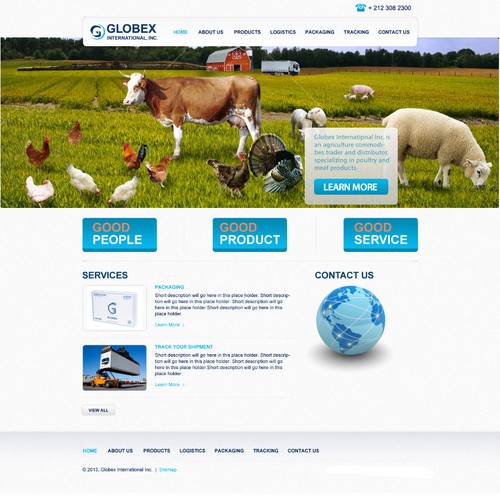 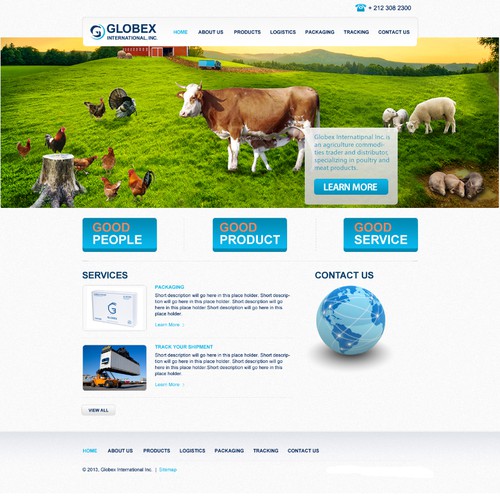 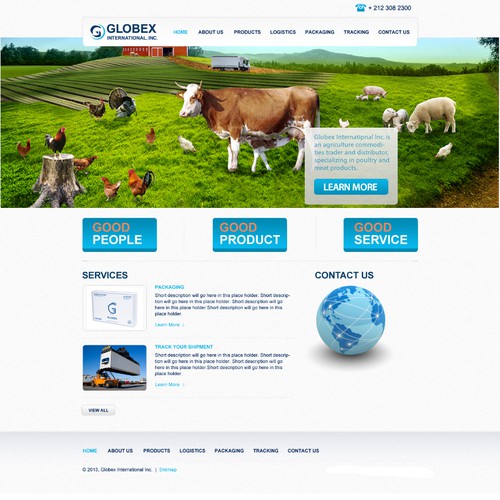 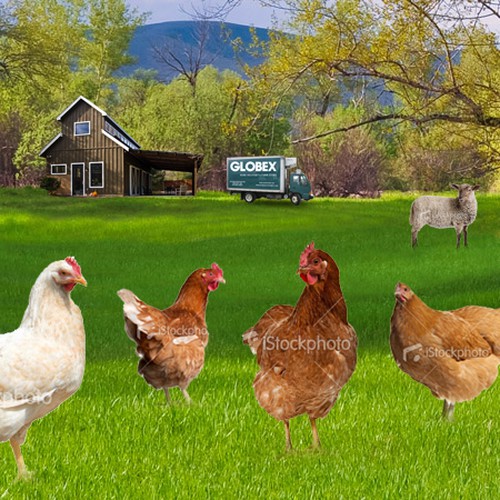 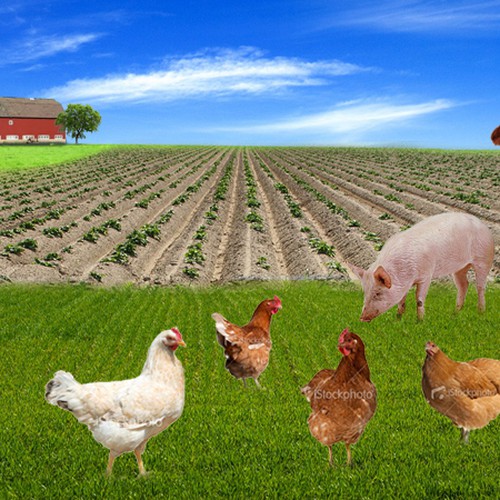 We export & distribute frozen poultry, beef, pork & other food items around the globe.

We need a header image for a page in our website. The image should be of various farm animals (animals specified below) grazing on a grassy field/meadow/farm, and there should be a farm house and semi-truck in the very distant background. This needs to be made up entirely of actual photographs spliced together to create what looks like a single photo of a bunch of different animals on a grassy field outside a farm.

These animals are listed in order of importance. With Chickens, a cow & a pig being the most important elements of the image. They should be front & center in the image, and there should be multiple Chickens used.

In addition to the animals on the field, we also wanted to incorporate the following 2 elements:
1) Barn / Farm House in the distant background
2) Large truck / Semi-truck, pulling up to or driving away from the barn/house also in the very distant background

The idea is to create an image of a farm, but also show the commercial activity going on, albeit in a very rustic way & far off in the background--the truck being loaded with product and then driving off to some distant port. We want to connect the fact that the containers full of food we ship around the world are sourced from places like this idyllic farm scene we are trying to create.

The most important thing, is that the final image look like a real photograph. It should look as close as possible to a photo someone took, that just happens to have captured all these elements in the frame when they snapped the photo. The animals must all be in proportion to their surroundings, and in proportion to each other. Meaning that we don't want any chickens that look as big as a Pig, or a Cow that's the same size as a Lamb, etc...
We've imagined that there should only be one of each animal, except for the chickens which we do want multiples of. But if you think that it would look better to have 2 cows together and 3 pigs together or whatever, that is absolutely fine, so long as the final image looks natural & real.

For this concept to work everything needs to come together to look like a real photo and so I imagine it will be created from various stock photos. You are free to use any stock photos you need, so long as it doesn't end up costing us more than a few hundred dollars in total.

We had this idea for a long time, and wanted to find an image like this for use not only in our website, but also in our print brochures & on large posters for trade shows we attend. BUT, we could not find a photograph that contained all 5 animals we needed to show.
So, we asked the company who made our trade show booth to create this image for us for use on a poster. They did so & it looked OK. As in, it was OK for a large poster at a trade show, but did NOT look nearly realistic enough for use in our website. Everything looks too airbrushed, and the animals look like they were pasted on almost randomly, the shadowing is not right....just not good for a high resolution image people will be looking at on a computer monitor. (I've uploaded this image to help illustrate the CONCEPT of what we want, but not the quality) But, we need an image with a Horizontal orientation, and the image they made is vertically oriented.
They are no longer doing this type of work, so we cannot go back and ask them to reorient the image for us now. Even if we could, the image wasn't perfect, and we want to try to add the barn/farm house & semi-truck images in the background also.

The goal is to create an image that incorporates not only the animals but also the farm house and the truck. BUT, if adding in the truck & house are too difficult, or make the picture look too photo-shopped, too altered, etc... THEN just use one of the elements, either the farm house or the truck. And if that is too fake looking, THEN just create an image of the 5 animals on the field without anything else....

Like I said, you are free to use any stock photos you wish. You can try to recreate the vertically oriented image I've uploaded into a horizontally oriented one we can use across the top of a webpage, or you can use it as an example. So long as we have those 5 animals on a grassy field with a blue sky, we are OK. And if you can successfully incorporate the other images of a barn/farm house & truck, then that would be ideal.

Please feel free to call of email me at any time during the process to ask for direction or to ask me questions.

The file I uploaded, "Website page to indicate size of image needed" is as the name suggests, to show how big we need this image to be.  It will occupy the space at the top of the page where there is currently a picture of a bunch of white chickens.

Also, please note I have uploaded 2 stock photos we have already purchased for prior projects; one of a cow and another of a lamb.  You are welcome to use these photos to create the image.

Also, I realize that not everyone will have access to all the stock images they want/need.  And I do not expect anyone to purchase any stock photos just to use for their submission...So, please note that photos with watermarks & not perfectly cropped photos will not effect how I judge your submission.

I just uploaded some sample pictures of what I am referring to by "plowed field/farm, alternating rows of dirt & grass/green plants" etc....

And I have also uploaded some pictures of the type of truck /semi-truck I am talking about.

WavingKitty.Com needs a new art or illustration
US$199
We are a direct marketing agency with a custom line of products
65
entries
19
designers
EMVI needs a new art or illustration
US$ 399
EMVI Inc is a family owned chocolate company in Brooklyn, NY, we hand make and package chocolate figurines made of…
55
entries
31
diseñadores
New art or illustration wanted for Cheese Chick Productions
$399
Design a gorgeous poster (18" x 24") celebrating the art of fine cheese in America
96
entries
24
designers
Mr Espresso Mural Story - Help us change the world with coffee
399 AU$
We operate retail espresso bars in Sydney...
25
entries
7
Designer
COFFEE THEMED BUILDING WRAP
$399
We are a wholesale Coffee Roaster...
43
entries
15
designers
HELP CREATE AN ICONIC BRAND
699 US$
We make novelty and promotional items. This project is for a label for a small tin of mints and various candies that ...
71
entries
20
designers