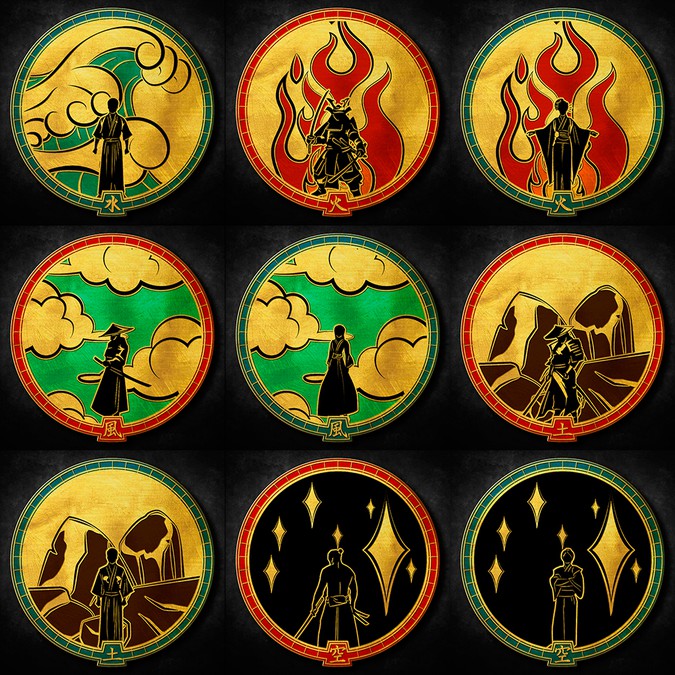 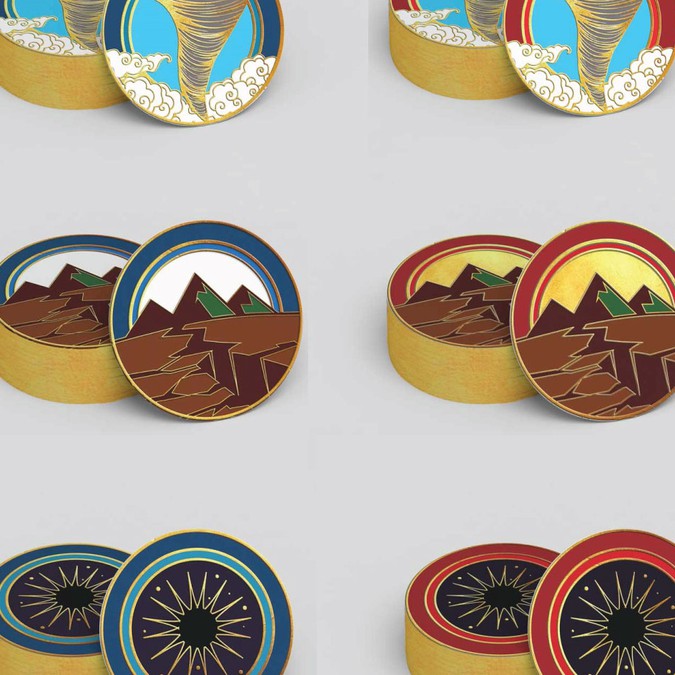 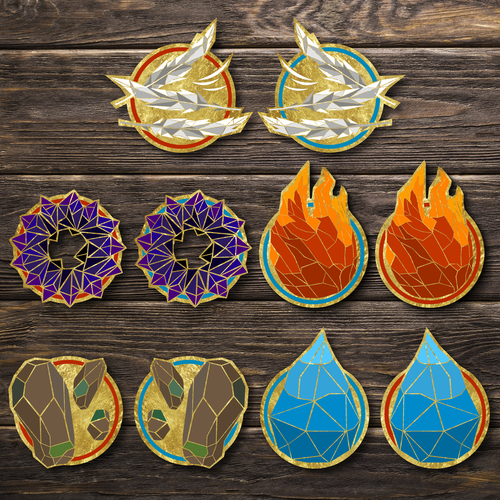 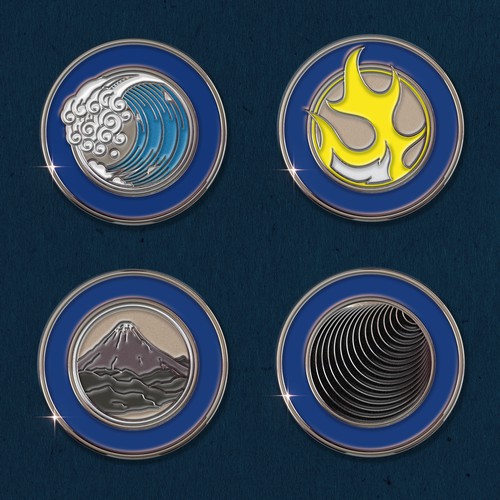 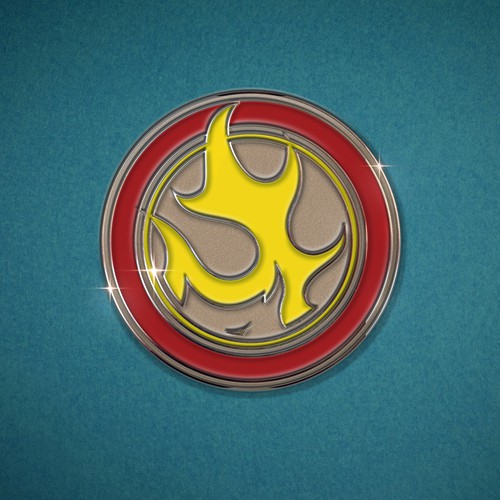 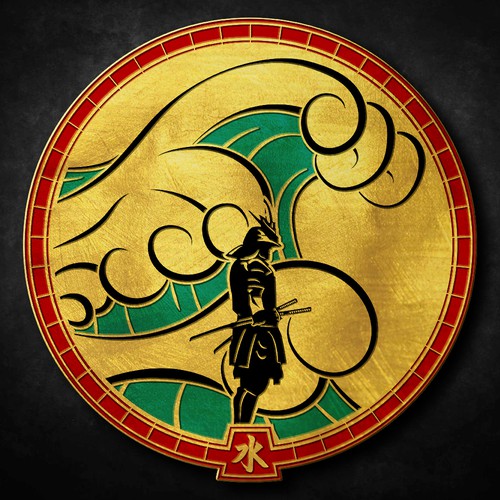 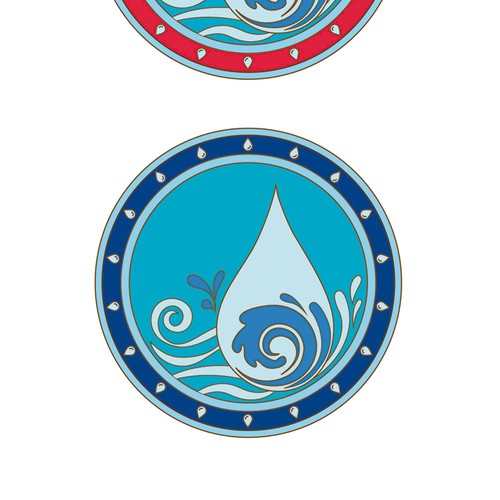 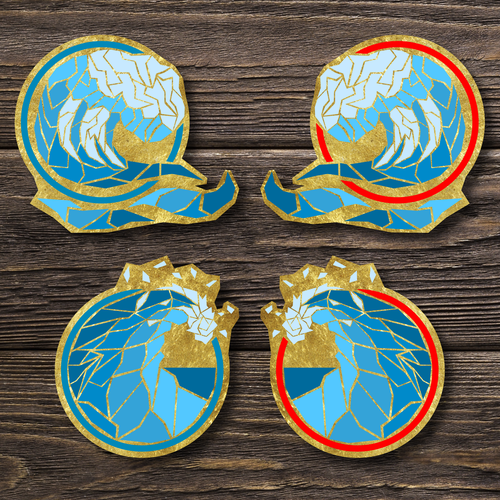 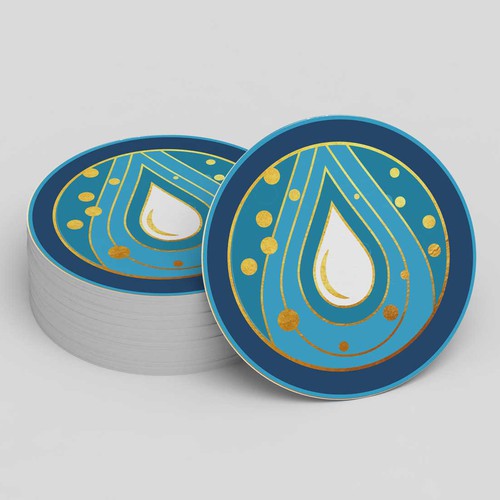 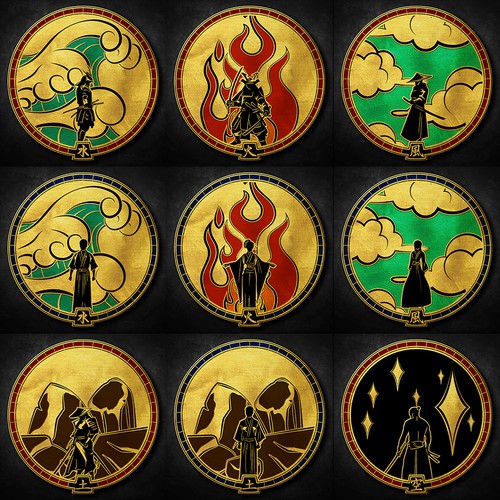 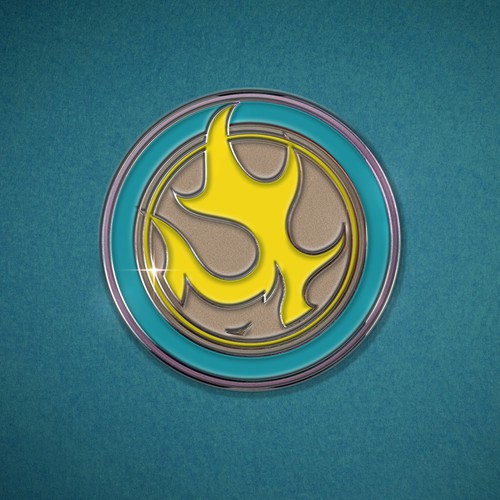 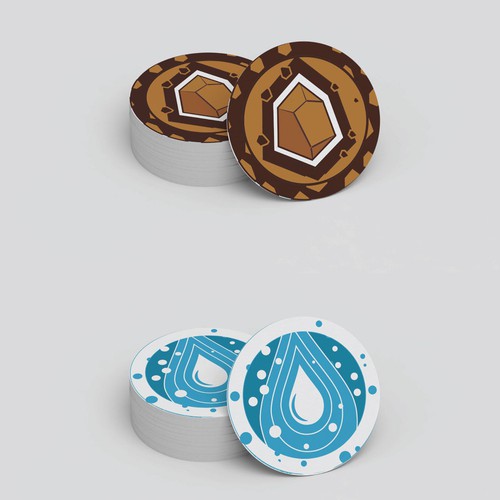 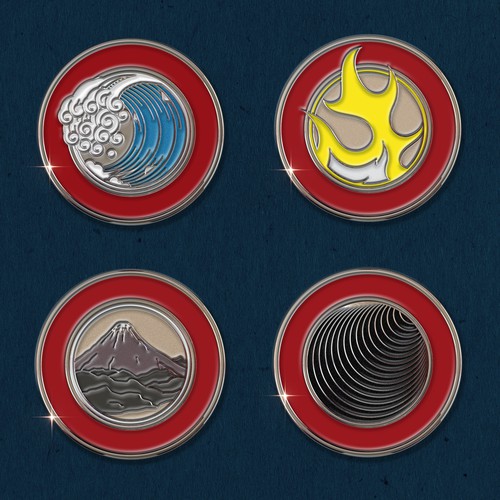 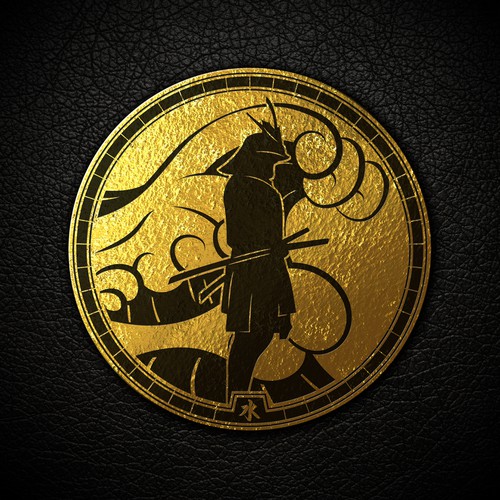 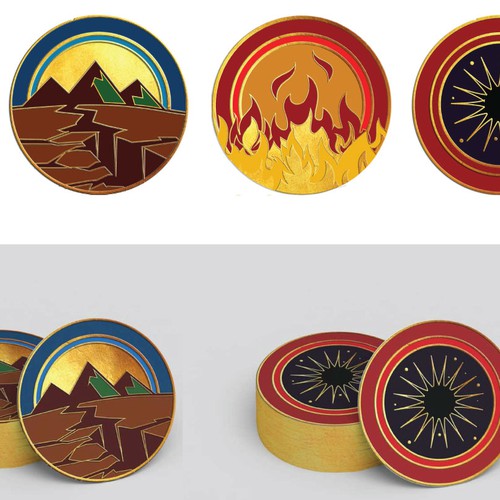 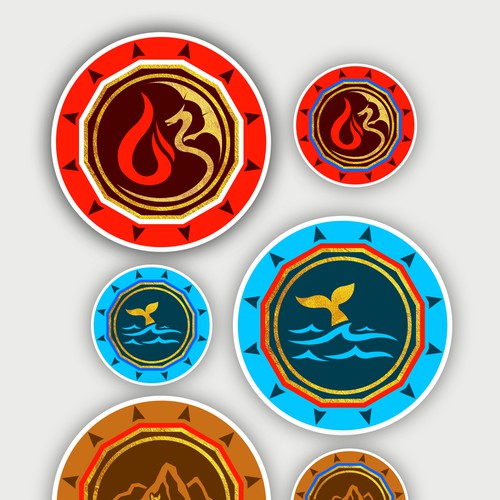 We create luxury components to supplement table/board games. Our target audience is usually the gamers themselves who want to really impress other gamers/collectors with their game pieces.

What I need is the 5 elemental ring icons/logos re-imagined for high-end coin minting. An example style of coin is provided to show the artstyle/medium I had originally been considering. In addition, attached there's the "default" element token images which we can use for inspiration-- but ours shouldn't appear similar for copyright reasons. The product we're making here is a luxury product and so the image/feel shouldn't be cartoony/silly/etc. I'll work later with our coin minters to work the designs onto 3D metal coins. For now I need logo-style artwork that could translate well into a coin format and is a bit cohesive.

- These coins will have a circular border along the edge that will be red on one side of the coin and blue on the other side of the coin. (Red for military, blue for political, for whatever that is worth in context.)
- I'd like to experiment with each element image extending "off" the coin (like the head of the watchtower example attached). I.e. over the border and creating a small part that extends outside of the circle of the coin. Ideally the design for each would work with one small part of it extending outside of the coin, as well as look good even if we were forced to fully self-contain the image inside the coin (but perhaps extending over the inner blue/red circular border).
- Could use 1-4 colors for the element (core image) on coin if we want, but ideally we avoid the exact red/blue colors that we'll use for the external rings on the coins.
- The coins will be gold-plated so negative space will probably be shiny gold unless otherwise designed.
- For "Void" note that there are other representations of this that can work, empty space, stars, interesting circle designs, etc. It doesn't have to be quite like what you see in the example image. The definition of the "Void" is: "The element of Void is that which exists outside of and surrounding the other four elements, defining them in its absence as silence defines the musical note it surrounds"

I'm really looking for a cohesive set of unique, elegant element icons that will map well to circular coins/tokens.

- Can't really use image textures or gradients, pretty much needs to be vectors/line-drawings. The space between lines can/will be filled with enamel of just about any solid color (glittery if needed), but we can't print an actual graphic or gradient. Please stick with vector/line-drawings and solid colors.
- Central image needs to be (at least roughly) the same on both sides. In the game, these coins are flipped and one side is the "red" (military) side and the other is the "blue" (political) side. But the central image/theme should be recognizable on both sides. Same central image is required on both sides, but colors will be different on at least the border (red border on one side, blue border on the other side). But if you drew a mountain on one side the same mountain should be in the center on the other side when someone flipped the coin.
- Since this is a coin, solid colors will have to be separated by metal (at least a thin, thin line of it). This can be gold or silver or brass. But I was default envisioning that all of these would be gold (a lot like the clocktower coin example). Colors can't really be right next to one another when we pour enamel into the coin metal. I can adapt your design to have the metal "outlines" but it'd be a bonus if you can include gold or silver (whatever works for your design) as the negative space and border/outline between color changes. In the end, I can probably adapt the design but the better you make it look when it'd be in true coin form, the better it will be for everyone :)
- More on the red/blue concept: Each coin is technically communicating two things, (1) an element and (2) red-vs-blue side is face-up. It doesn't have to be a purely red/blue circular ring on it. It just has to be obvious that this side of the ring is the "blue side" versus "red side". The easiest way to do that is probably to have a red or blue outer ring (kind of like how it's done on the picture with a purple ring that I uploaded).
- For any designer considering variants or an alternative design, one variant my customers would love to look over would be a concept where an animal (or maybe a star/planet for void) features as a 3D gold element as a part of a scene with the element in color (e.g. sky/clouds with a golden bird, water waves with a golden whale/tail, horse on the plains with mountains behind, maybe a dragon with fire around it). It could be anything but the idea is kind of to use the animal to offer additional signal of the element. I'll add a random example in the attachments.

Don't hesitate to ask for clarification! <3

make the basketball themed designs on a kids' storage box cooler
159 £
This is a storage box for balls with a basketball ring in it which makes cleaning up fun.
3
entries
3
designers
Design Jarritos (Mexican soft drink) inspired pin
US$ 199
Tio Machula is an Etsy store that specializes in Latino inspired pop culture items, like pins, hats and t-shirts. We sta
77
entries
17
diseñadores
Esports Merchandise Design
US$499
We are an esports organization that runs several teams and leagues.
73
entries
16
diseñadores
Company firm logo
US$ 199
We are a Personal Injury Law Firm and our main colors are red, white, darker gray and black. We are not very corporate a
78
entries
32
designers
Landschaftsbild für eine Glaswand im Badezimmer
CHF 309
15
entries
5
Designer
Outdoor Belt
$199
An outdoor company that manufactures apparel and accessories.
18
entries
11
diseñadores