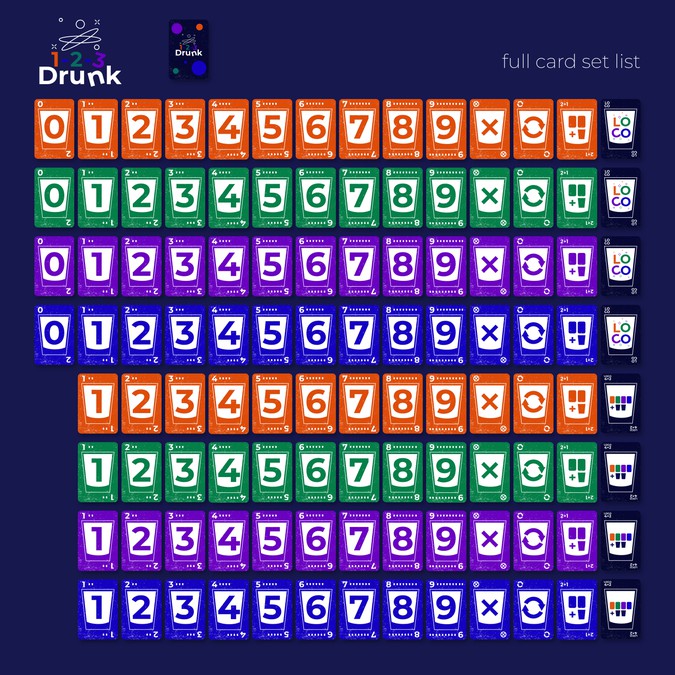 We are a brand of games sold direct to consumer via ecommerce channels like Amazon and Etsy. We target young adults looking for fun activities to do at parties, tailgating, events etc. with a bit of nostalgia thrown in.

We developed a game called Un Drunko, basically a drinking version of the game Uno. We are not affiliated with uno, so the commands on the cards will be different than the classic card game and the look/design needs to be different but we want it to have a similar vibe.

The style/design should be different enough so you wouldn't immediately think it was the classic game.

The design we need is for the playing cards. There are 108 cards in total. Card dimensions are the same size as standard playing cards (3.5in length x 2.5in width) and have rounded edges.

Now I just want to go over the classic uno cards, colors, and amounts. After that I will discuss changes we need to make.

UN DRUNKO:
We will also use 4 suits. The colors should NOT be the exact same as uno. We should switch some out for completely different colors and keep them dark and bold. The numbers on the cards will be the same. Draw two cards would now say "2+1" in the corners and have a graphic with 2 cards and one shot glass in the middle of the card. For the Skip Card, instead of having the circle with a slash across it (as shown in the images), it would be a circle with an X over it and also have a shot glass underneath it. Reverse would also need a slightly different symbol than the classic game which has arrows going in the opposite directions (image attached) and also add the shot glass. Wild Cards would now say "Loco". Wild Draw 4 would now say "Loco 4+2" and have a symbol with 4 cards and 2 shot glasses in the middle. On the backside of every card would say "Drunkoono"

Font and background graphics should be a fun, more modern and abstract take on the original game.

Cool designs aren’t for wusses *
199 US$
Target audience is all women hair stylists of all ages. I am creating products to be sold along side hairstylist clothin
113
entries
20
diseñadores
We need the best design to sell merchandise on YouTube!
CA$669
I have a YouTube channel and I play video games on it. I mostly play games aimed at kids such as Mario and Minecraft. My
21
entries
10
デザイナー数
Fun and Snarky Design for Women
499 US$
We empower women with fun.
106
entries
32
diseñadores
YouTuber merch design
199 $US
I'm a YouTuber with an audience of both male and female aged from 7 to 25. Especially the younger demography likes to bu
40
entries
23
designer graphistes
Company firm logo
$199
We are a Personal Injury Law Firm and our main colors are red, white, darker gray and black. We are not very corporate a
78
entries
32
デザイナー数
Outdoor Belt
199 $US
An outdoor company that manufactures apparel and accessories.
18
entries
11
designer graphistes

Comienza ahora
We need an eye catching watermelon design for a novelty blanket
269 $AU
We manufacture and sell premium home ware including throw blankets and picnic blankets. Our target customers are familie
64
entries
24
designer graphistes
Austrian Team Barefoot Worlds Suit
AUD 269
We are a barefoot waterski school, specializing in teaching people to ski on their bare feet at all ages and skill level
27
entries
6
diseñadores
VICTORIA DAY WEEKEND T-SHIRT GRAPHIC
CA$ 269
The customer is Canada's Wonderland The design is a graphic t-shirt for Victoria Day Weekend Victoria Day is the unoffic
31
entries
10
Designer
Humboldt Clothing Company needs engraved sunglasses design
US$ 199
We are a clothing company located in Humboldt County, in Northern California. You can check out our line at www.humbold
13
entries
5
designers
The Riverside Donkeys need a Logo!
299 $
The Riverside Donkeys are a mens golf group that is part of the Riverside Golf and Country Club. It is named after 2 don
70
entries
16
Designer
Playful, flat elephant logo design for a game company!
299 US$
Evan's Games is a company that produces fun, wholesome games that are cute but also require strategy. The games appeal t
114
entries
44
designers
Más información sobre diseño de ropa o productos
Vea como funciona