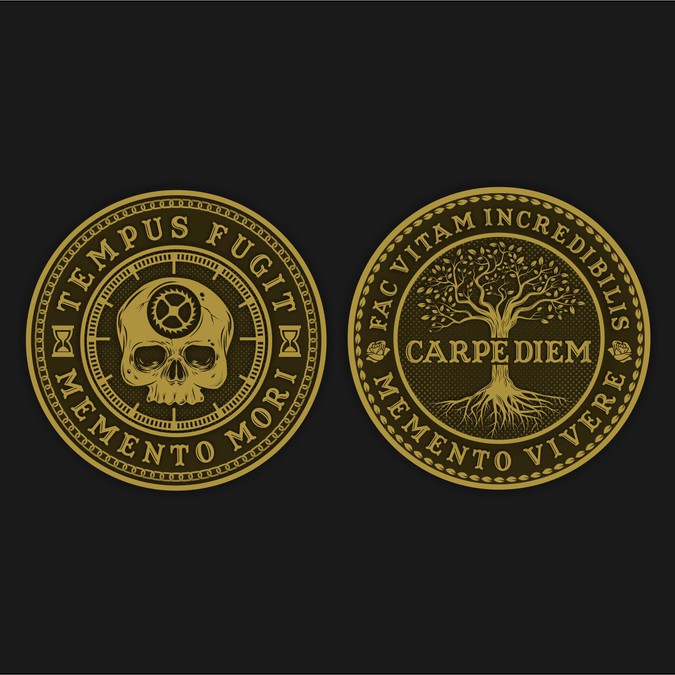 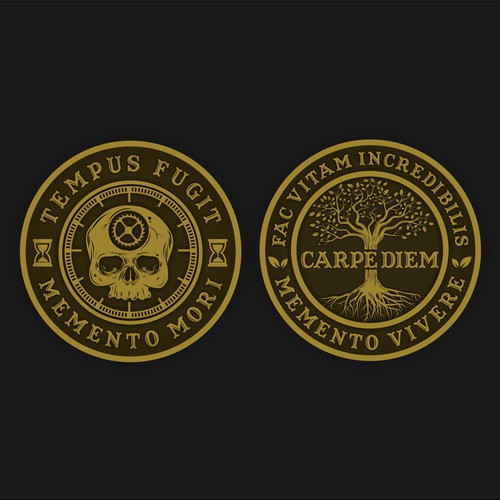 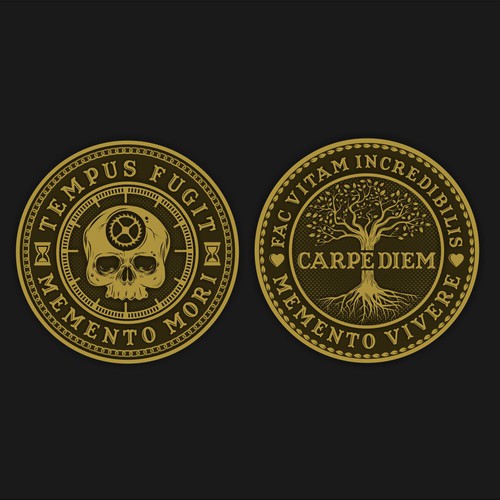 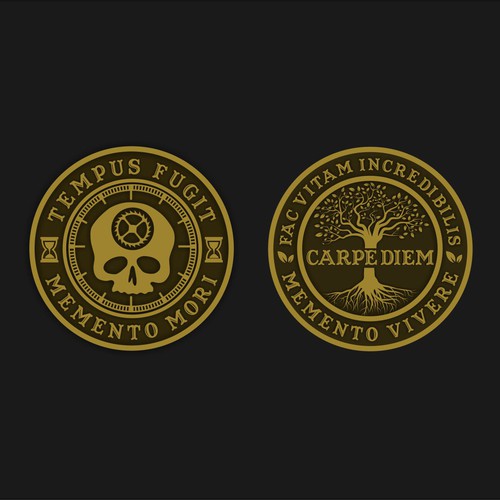 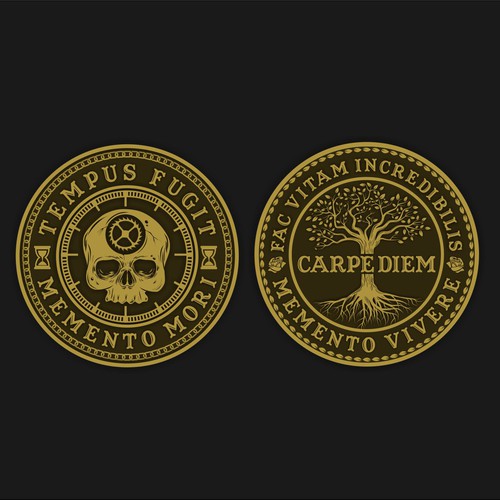 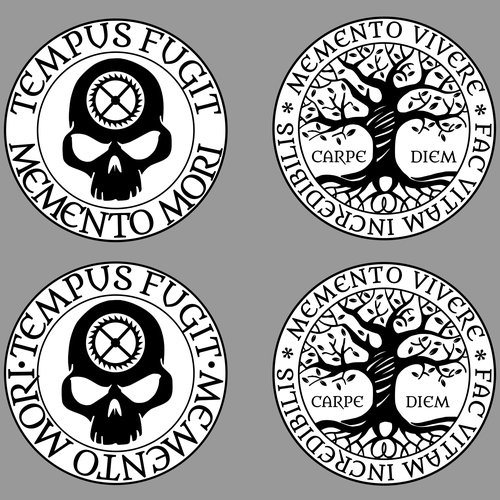 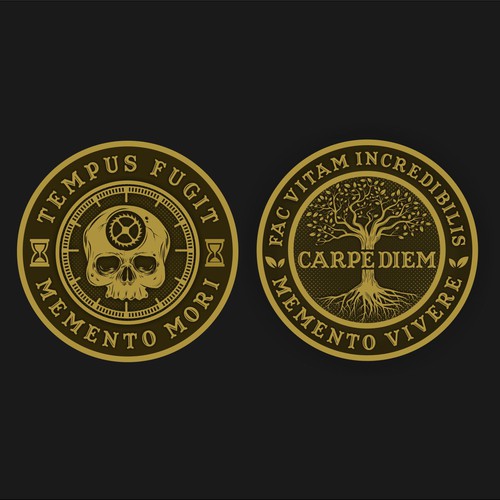 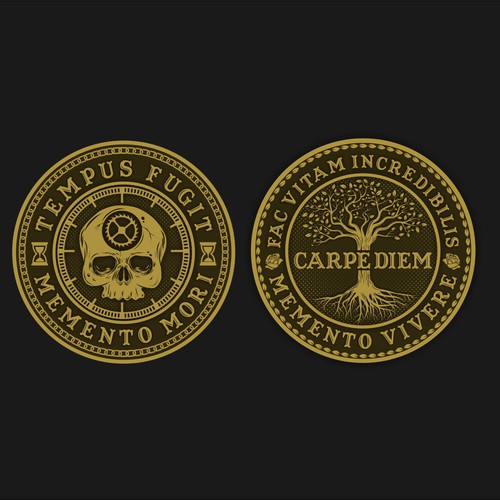 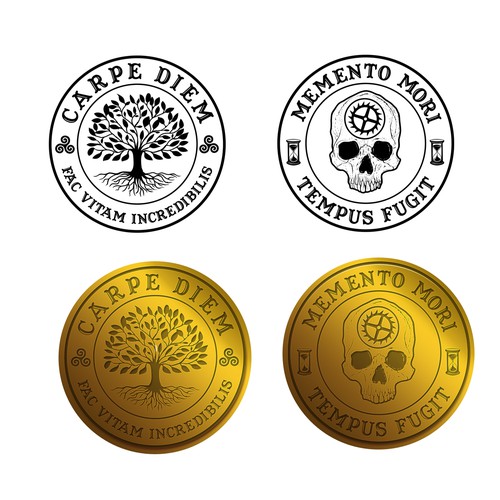 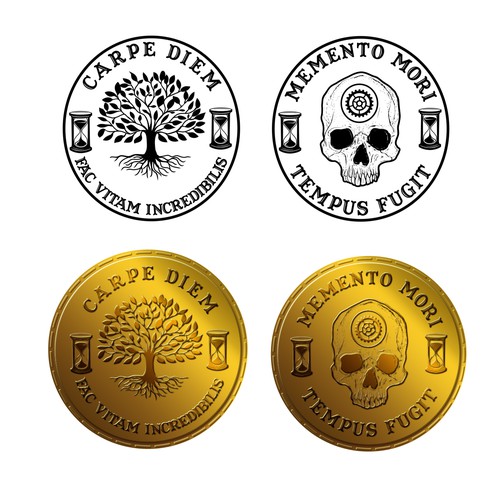 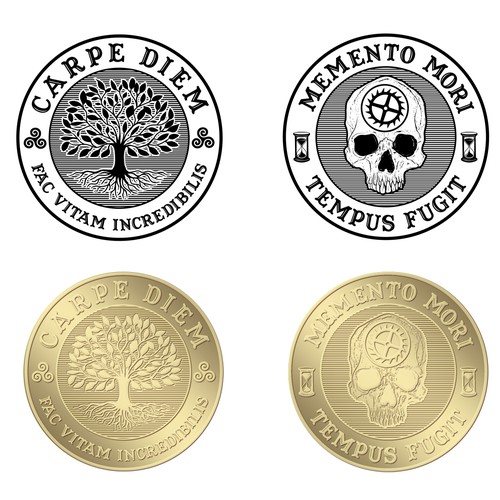 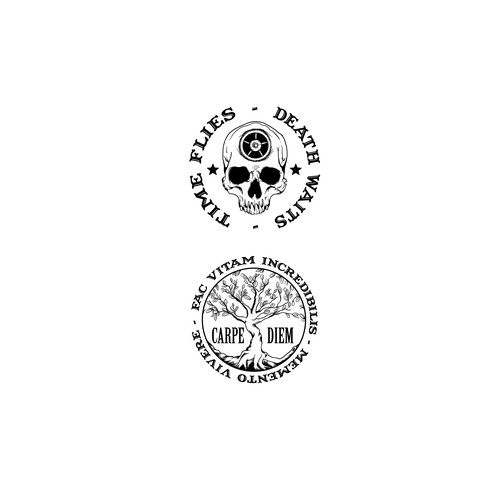 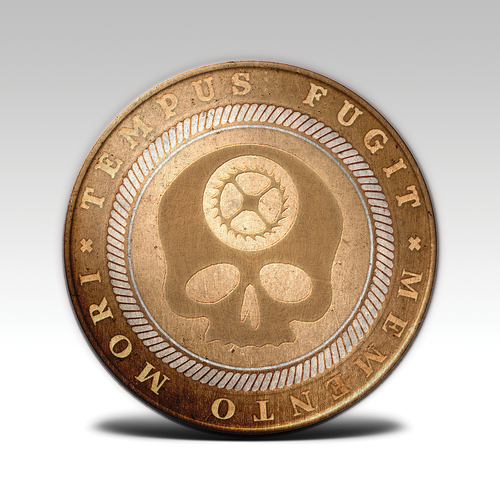 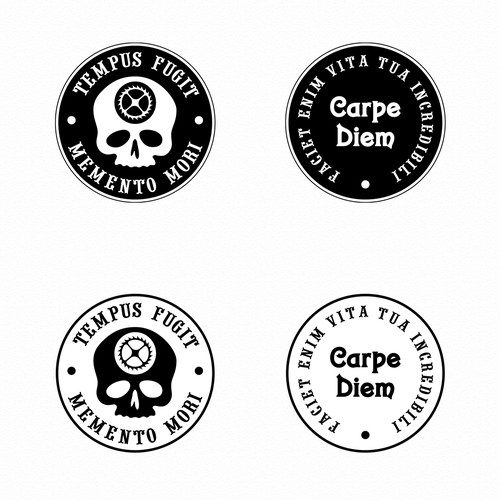 Product is a coin to carry every day as a reminder to live each day to the fullest. Carpe Diem!

Two sides of a 39mm in diameter coin. I designed a "Carpe Diem" coin a few years ago with 3D modeling software, and have had the coins 3D printed in bronze steel by Shapeways (photos attached to this contest). While my coin design has been very popular with my friends and customers, it is quite crude or simple, so I would now like to have real graphic designers recreate my coin so that I can have it minted by an actual coin minting company.

I designed one side of the coin with an image of death (the skull), plus an image representing time (the escape wheel gear found in all mechanical clocks and watches), to drive the point home at a single glance. I would like to keep this image of a skull with a watch gear in the forehead, but would like it to be redone to be much more badass than I was able to achieve. Around the skull, I placed the words "Time Flies" (becomes more of a reality every day as I am now 51 years old, and "Death Waits" as a grim reminder that at the end of all your uncertain days alive, there is the certainty of death. I would like to have the latin words "TEMPUS FUGIT" and "MEMENTO MORI" placed around the skull instead, and in a super cool font like that used on an antique Ouija Board.

I would like for other side of the coin should say "Carpe Diem" in the center, which means "seize the day", and should say something around the edge in latin like "faciet enim vita tua incredibili" (make your life extraordinary).

The whole point of the coin is to remind the person carrying it that time is fleeting "Time Flies" / "Temus Fugit", and some day, maybe sooner than you expect, you are going to die "Death Waits" / "Memento More" (Remember Death). So realizing these facts from the one side of the coin, you flip the coin over for direction to "Carpe Diem" / "Seize the Day" - Make the most of every single day - make your life extraordinary.

Help Riders Inc with a new clothing or merchandise design
A$199
We are a retail store and we sell water ski and wakeboard equipment
90
entries
11
designers
Create the next clothing or merchandise design for Blackhawk Hardware
US$279
We are a local hardware store and garden center with a "boutique" product selection located in Charlotte, North…
49
entries
10
designers
Create Cute and Romantic Pillowcases Designs for Couples (possible long term work!)
$189
We create custom, high quality, private label goods for sale on Amazon and other online marketplaces....
35
entries
12
designers
Create a reconnaissance style image for apparel
$249
It is military based. The term reconnaissance means to survey, or explore an enemy territory. Target audience is mili...
33
entries
13
designers
Rush Packaging Project
US$ 639
Gift manufacturer specializing in journals and office products for mass market and boutique retailers....
30
entries
3
designers
The Stork Willy
259 €
71
entries
10
designers