Character for animation cartoons for an iPad education game 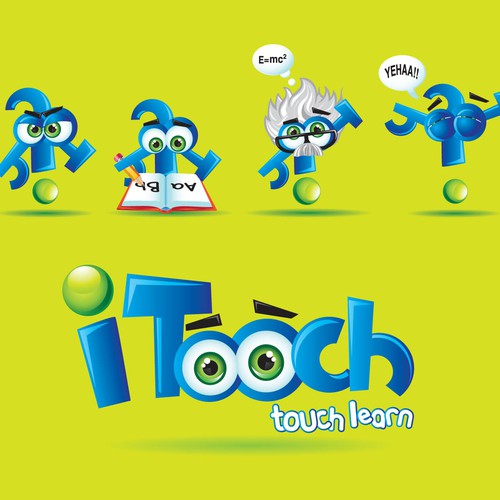 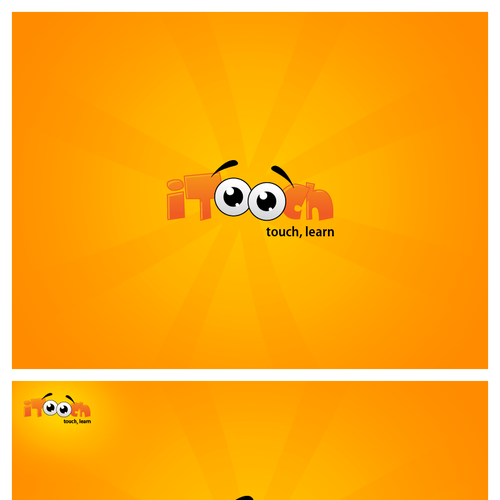 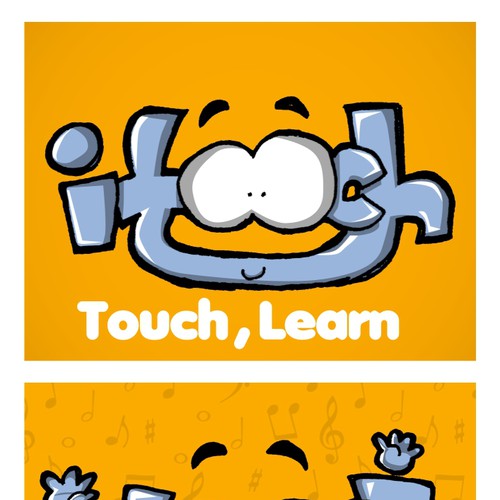 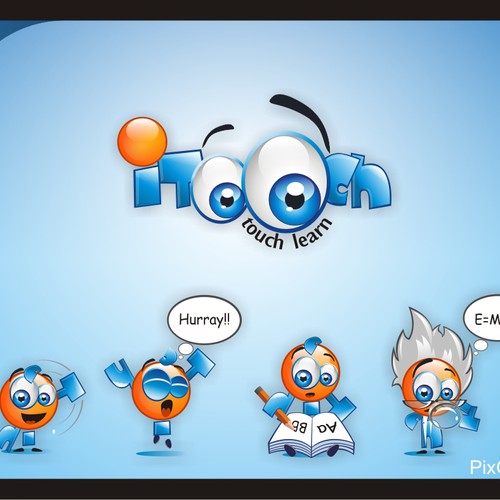 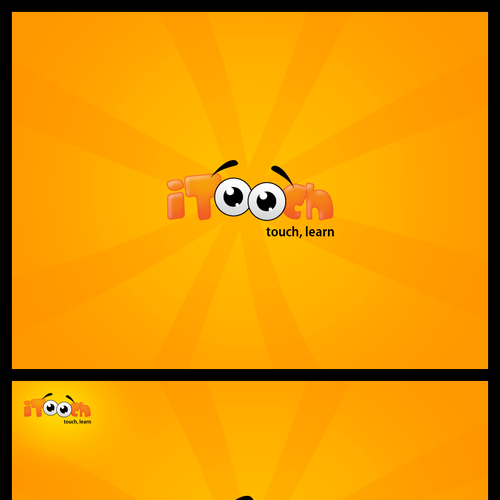 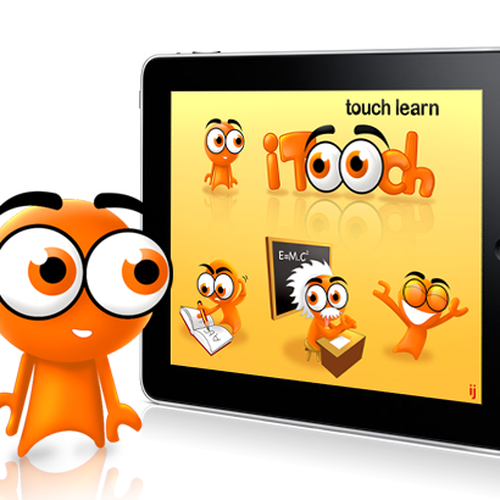 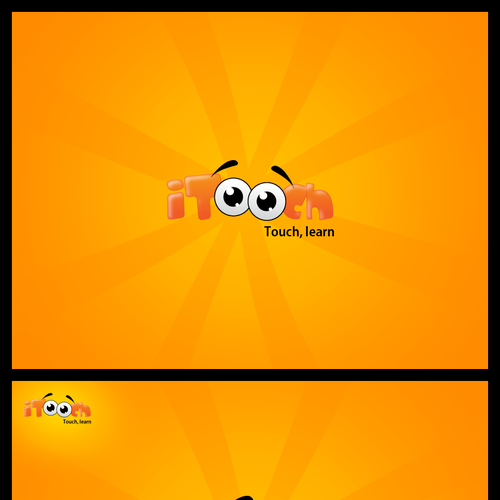 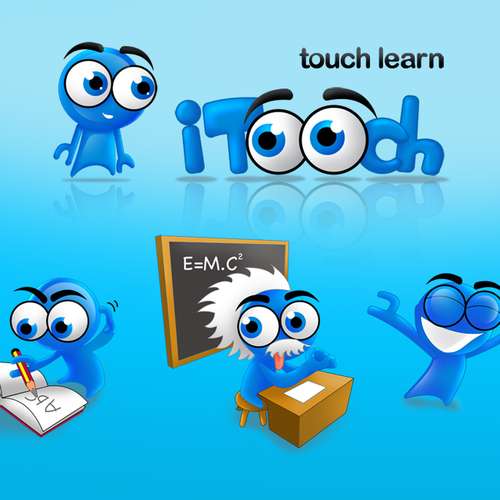 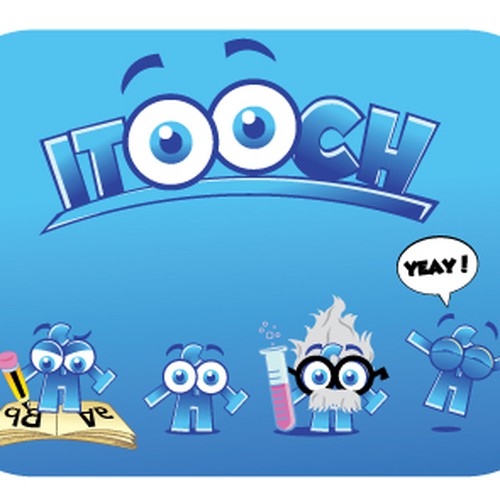 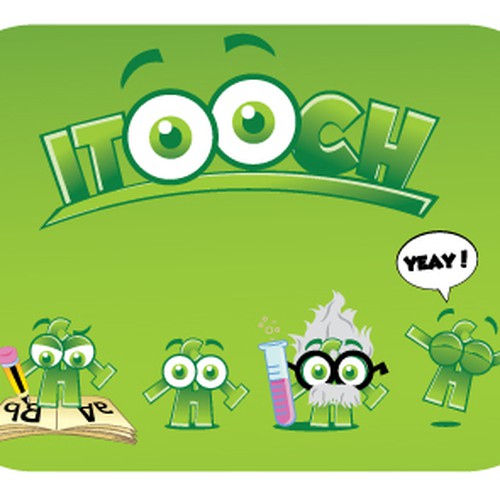 We are a self-funded startup launching a multitouch education game for kids between 6 an 13 on iPad and other tactile tablets.

Once we have chosen the iTooch character you'll design, we will use it for an unlimited number of animations, because it will be central to our software. So if you are rocket-fast at generating animations, stay tuned!

We want them to want to use the software... to learn things (!!!!!), so we badly need to make our software fun and engaging for those manga and video game overfed kids.

Bart and Lisa Simpson are our target audience. They must be fans of your creation!

We are looking for the design of a character based on the letters of the name iTooch, the eyes being the two O's. iTooch's role is to embody the educating game we are currently developping.

iTooth is young, engaging, fun and high-energy. He behaves like a kitty. He loves playing and kidding. He is highly expressive. He can be naughty at times.

iTooch's letters (except for the two O's, that is: the i,T,c and h) are the character's members. iTooch can mortph into whatever needed in order to express how iTooth feels or what he is doing (color & general look of the letters remain see attached files).
The O's (iTooth's eyes) don't morph the same: they express the character's feeling (surprise, concentration, tiredness, anger, joy, relief...).
In fact iTooch will behave very much like the old MS Office assistant.

Font used to "write" iTooch must be original, with no copyrights.
Design should keep very simple, so that animation & morphing of the character is easy.

Strong Simple Logo to appeal mainly to women
239 £
This is an virtual movement studio for our clients who aren't able to get to the studio because of the Corona Virus. We
62
entries
21
designer
Logo for current mBrace app. This is getting rebranded to EverStrong.
299 US$
For busy people with busy minds, EverStrong is the only emotional intelligence app that helps people deal with the press
203
entries
95
designers
Clean and happy logo for Online Sustainability Courses
US$ 899
IMPORTANT: Earth Ayuda means EARTH HELP, this logo must express EARTH HELP visually - please do not submit generic temp
246
entries
64
designers
Great Salt Lake Photo
299 $US
I am a photographer that specialize 100% photos of the Great Salt Lake in Utah, USA. Here is an idea of the photos http
40
entries
21
designer graphistes
Logo for innovative new cleaning start-up
AUD 399
Bio Blitz is an innovative new cleaning start-up. It uses high powered "Fogging Machines" - the ones you have seen on th
38
entries
17
diseñadores
Name Design Contest!
299 USD
I am a country music artist and I would like to have a logo design for my name "John Green" in some shade of the color g
74
entries
24
designer

Comienza ahora
Washington D.C. Land team Logo
299 $
We are a sales team focused on getting businesses to sign up for amazon.com's new website "Amazon Business". We are the
22
entries
14
Designer
Design a book cover for an exciting science-fiction novel
1.099 AU$
Adults who love science-fiction. Star Wars fans. Star Trek fans.
56
entries
19
Designer
Registration page - artwork design already provided
US$899
We have a mailer (uploaded) that we send to prospects that drives them to a registration page. I have uploaded the maile
15
entries
5
diseñadores
Design an award winning logo for a new Physical Therapy TeleHealth company!
$ 299
iMove TelePT is a TeleHealth physical therapy company. Our high level trained physical therapists connect with our patie
165
entries
51
Designer
Cool, modern logo for a Kentucky horse breeding operation and farm
299 US$
We are a Kentucky horse breeder and farm
76
entries
32
designers
Diversity and Inclusion consultant to big business needing new logo
399 GBP
Consultancy support for leaders who want to make their businesses more diverse and inclusive - particularly when they ar
38
entries
14
diseñadores
Más información sobre diseño de otro
Vea como funciona