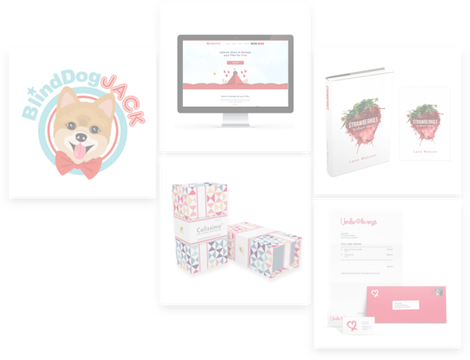 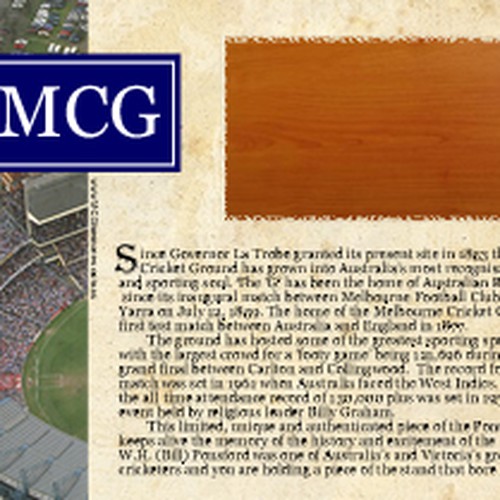 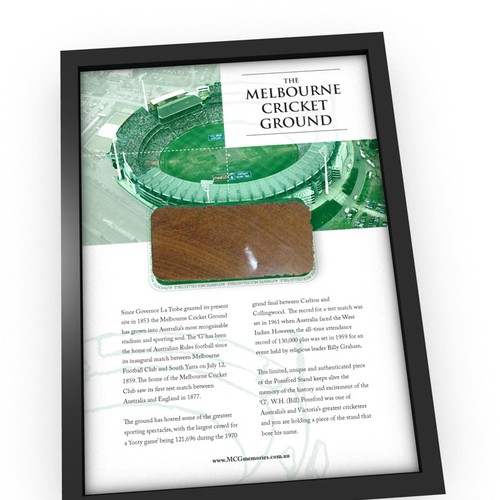 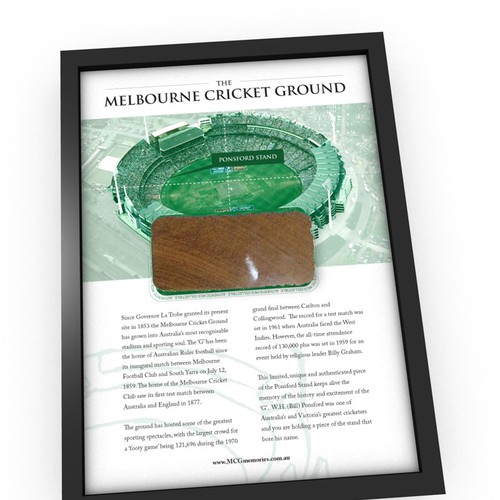 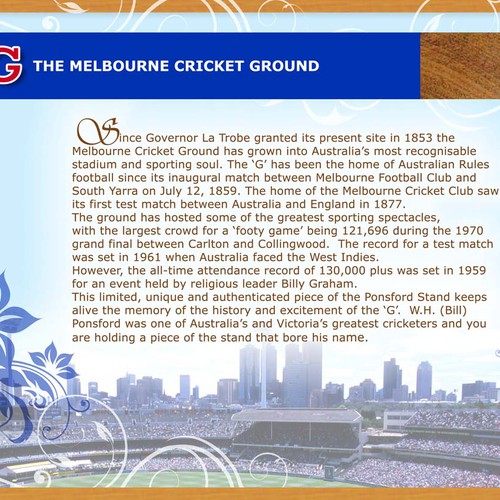 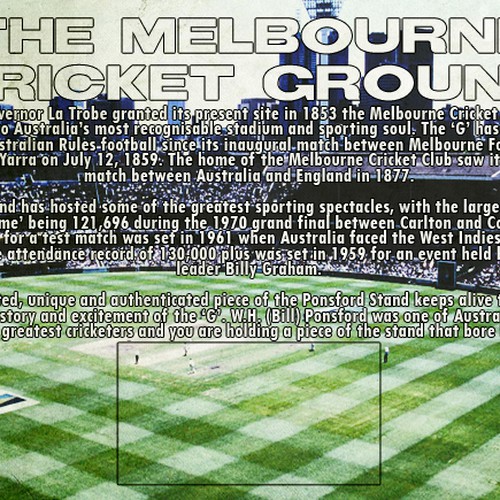 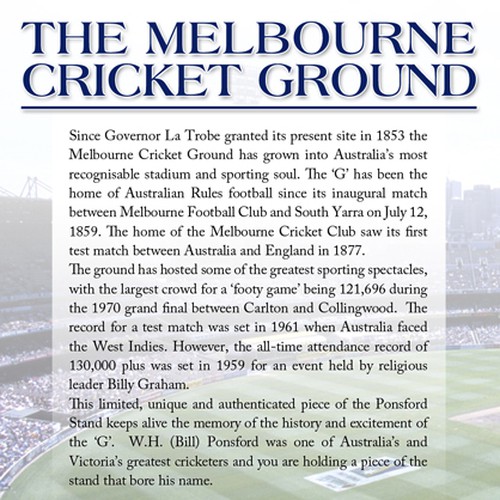 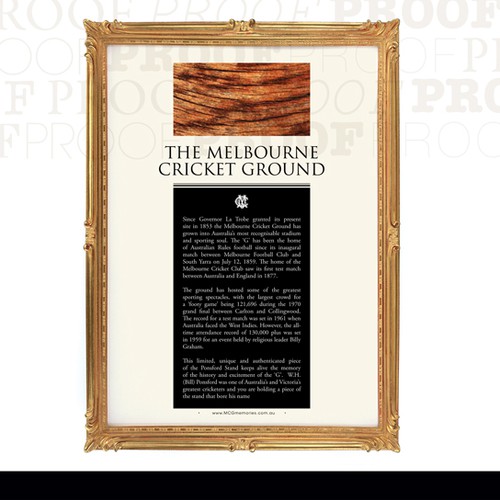 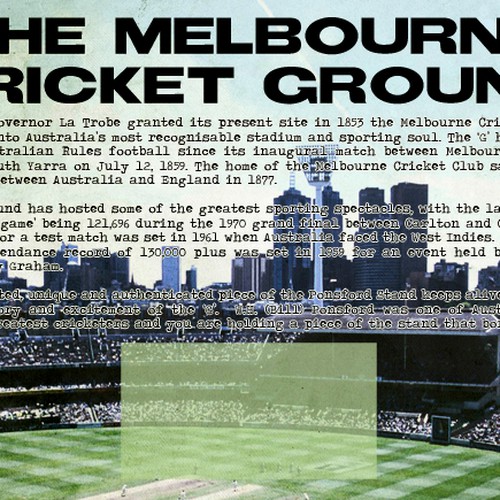 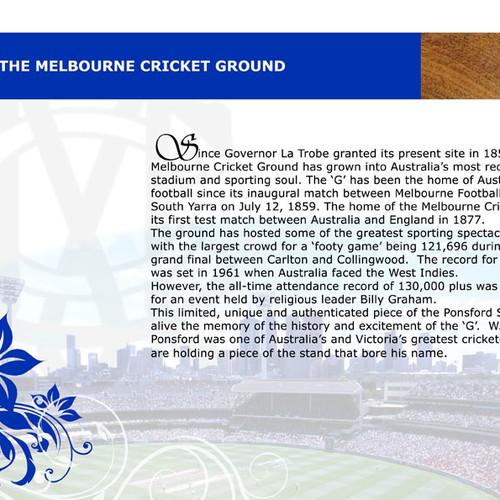 I am I relaunching a 'collectible certificate' which needs a complete redesign...

The piece is a A5 certificate which outlines the history of Australia's version of Yankee Stadium; the MCG and comes with an attached piece of the historic stadium.

As you can see from the original design here - http://www.mcgmemories.com.au/certi…000024.jpg - the original certificate is very plain and boring.

What I need is for you to redesign this A5 (5.8 × 8.3) certificate so it is more appealing, so the owner wants to proudly hang it in their home or office.

The wording for the certificate is:

THE MELBOURNE CRICKET GROUND
Since Governor La Trobe granted its present site in 1853 the Melbourne Cricket Ground has grown into Australia’s most recognisable stadium and sporting soul. The ‘G’ has been the home of Australian Rules football since its inaugural match between Melbourne Football Club and South Yarra on July 12, 1859. The home of the Melbourne Cricket Club saw its first test match between Australia and England in 1877.
The ground has hosted some of the greatest sporting spectacles, with the largest crowd for a ‘footy game’ being 121,696 during the 1970 grand final between Carlton and Collingwood.  The record for a test match was set in 1961 when Australia faced the West Indies. However, the all-time attendance record of 130,000 plus was set in 1959 for an event held by religious leader Billy Graham.
This limited, unique and authenticated piece of the Ponsford Stand keeps alive the memory of the history and excitement of the ‘G’.  W.H. (Bill) Ponsford was one of Australia’s and Victoria’s greatest cricketers and you are holding a piece of the stand that bore his name.

Here are some stock images to begin with:

A full background story can be found at:

- The style I am thinking is a stronger headline font, with maybe awashed out image as the background or something similar.. but please becreative with your designs and consider this project as a blank canvasto get creative with.
- Also, if you feel an A4 size would work better, please feel free to design that style, but please notethat the piece of timber for the stadium is only 7.5cm x 4cm and needsto look good (and not out of place) somewhere prominently on thecertificate - maybe a border or something around the area the timberwill be stuck could work well.

- Font selection and type setting is a big part of this design, so please consider this strongly.

- There isn't anything specific that I DON'T want... so feel free to get creative.

We need an elegant design for our 5 Star Pet Grooming Salon. Salon has a ‘Rustic Industrial’ feel/fit out.
A$399
We are an established, 5 Star, Pet Grooming Salon, located in the Hunter Valley. We are rebranding & hoping for a more “
69
entries
24
デザイナー数
New Logo will be included in Advertising Layouts in Showsight Magazine and comparable publications
299 $US
DOG BREEDER, ADVERTISING IS USED TO PROMOTE DOG BREEDING BUSINESS, TARGET AUDIENCE IS FAMILIES LOOKING TO BUY A DOG
17
entries
2
designer graphistes
Create a Logo for the world's best selling snack foods.
USD 899
rhōm is a nutritious snack food label. The word rhōm is an alternative spelling of roam. From grass fed, grass finished
134
entries
48
diseñadores
Virus Prevention Logo - will get seen! Read description
US$ 299
We provide an proprietary, EPA registered, FDA approved for food-contact surfaces nanoscopic coating to surfaces that ki
63
entries
26
designers
Family Household Cleaner that works
$299
This is a household cleaner geared towards moms/families
125
entries
45
diseñadores
Dental practice specializing in root canals needs a logo!
299 $US
We are a dental office specializing in root canals. We like the idea of using our name and the Pittsburgh skyline behin
47
entries
9
designer graphistes