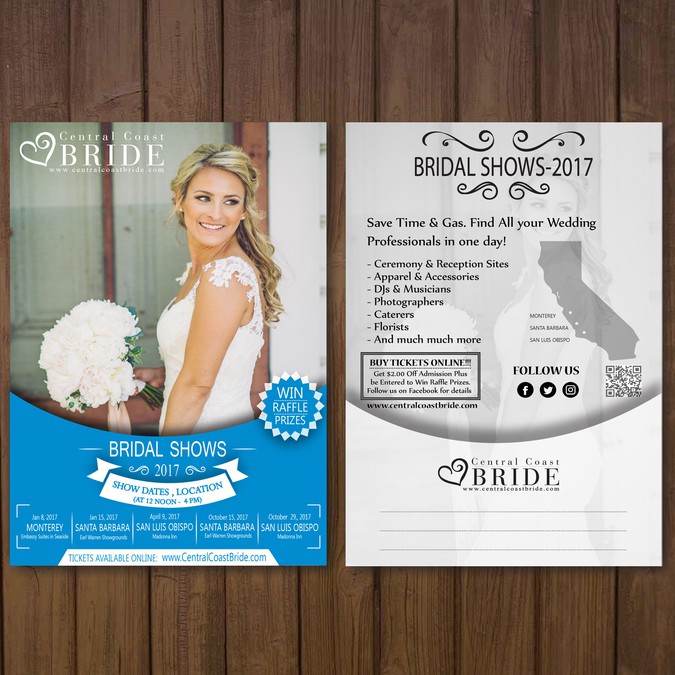 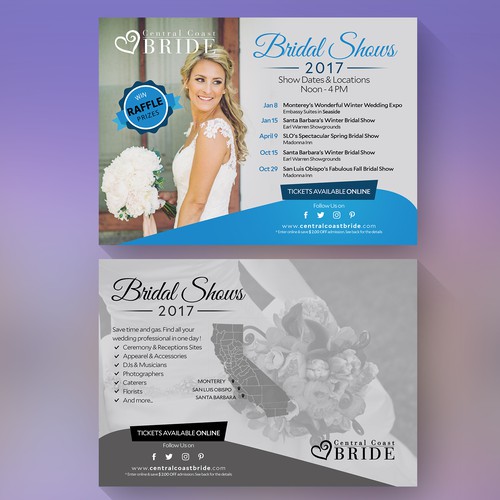 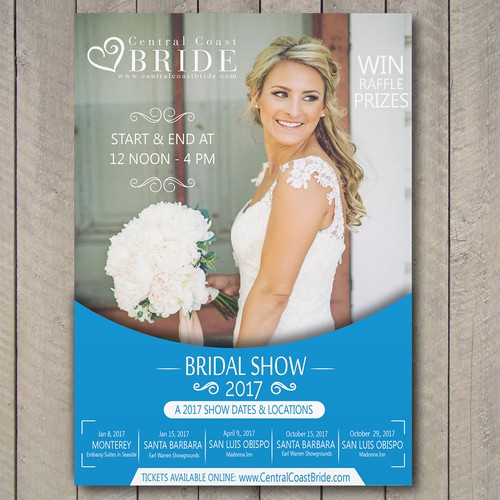 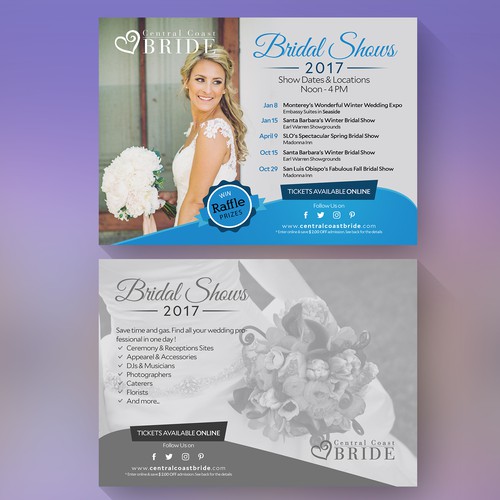 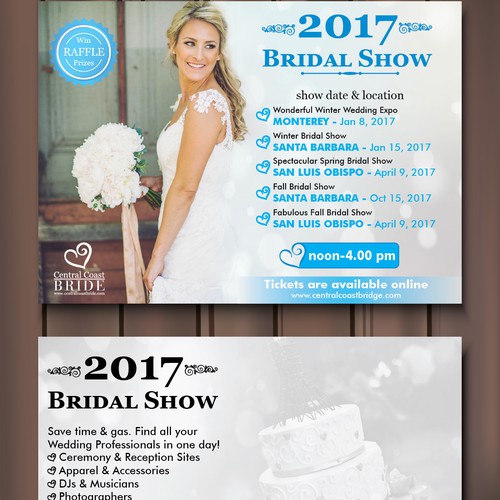 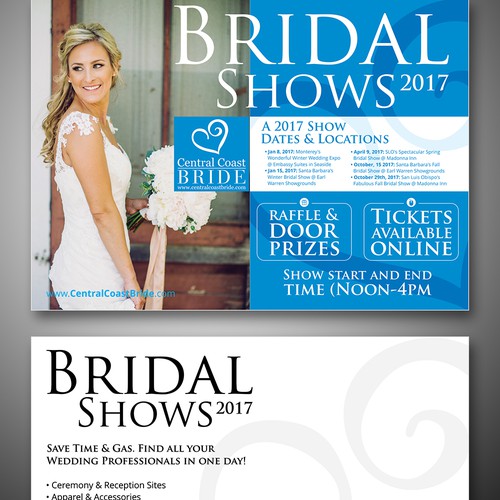 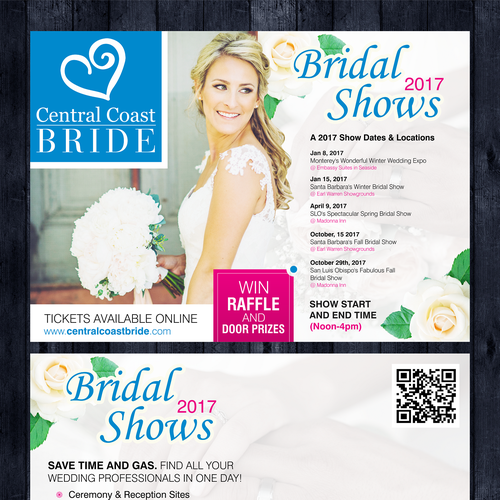 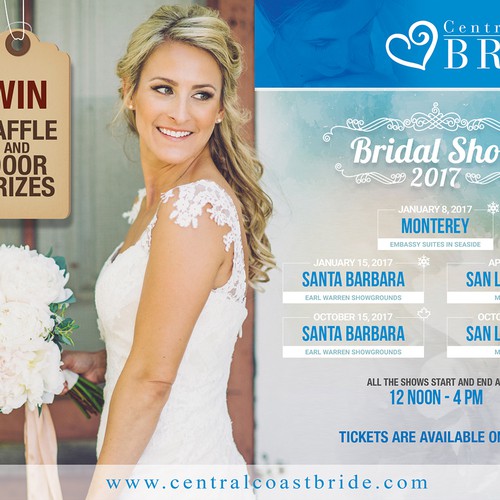 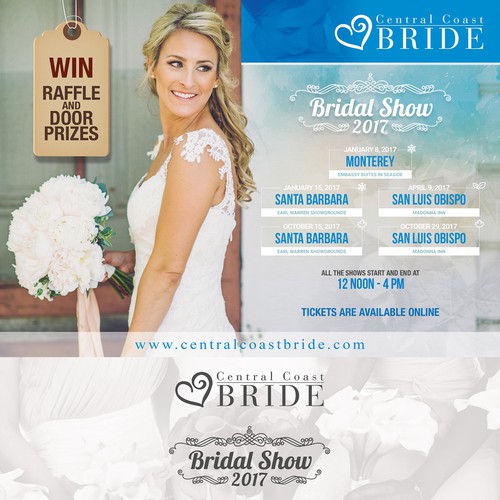 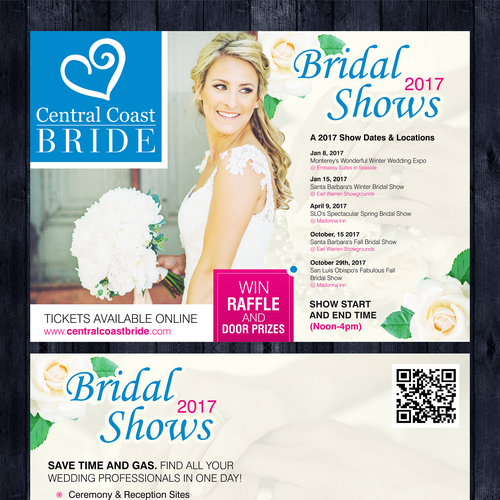 We produce wedding expos on the central coast of California. We have 5 shows per year in three different cities: Monterey, San Luis Obispo, and Santa Barbara. We typically target women (ages 20-35), but our clients pretty much include anyone planning a wedding.

You can check out our website at http://www.CentralCoastBride.com, but please note that is undergoing an overhaul, and should not be used to indicate our design tastes or styles.

Postcard (Size 5" x 7") Front and Back
Color on the front and b/w on the back
300 DPI
Editable format such as Adobe Illustrator, InDesign, or Photoshop.

We want a postcard to be used to promote our 2017 Bridal Shows. We typically distribute stacks of postcards to local business in the months before a show, and do a very limited mailing as well.

In the past, we have done a different postcard for each show, which means it has to be designed and printed in time to be distributed. It also cannot be reused, so if we order too many, they are trash after the show. I want to create a single postcard per year that can be distributed in all three regions.

Everything else is optional.

I was thinking of having the state of California (or an outline of the state) with the regions pointed out and details blown up, but I'm not dead set on this idea. I have a feeling that isn't a great explanation so I attached a picture of a little doodle so you can get the idea. I want to make sure that people in Monterey don't glance at the postcard and dismiss it because they think it is for a show in Santa Barbara and visa versa.

Attached are examples of what we have done for the postcards of the last few shows, the photo used for the cover of our last local magazine, and a quick sketch to illustrate my comment about a map of California.

postcard or flyer for The Premier Event
$195
Event planning company
53
entries
15
designers
postcard or flyer for Royal Flush Event Group
US$199
We are a DJ entertainment company that caters to the wedding industry.
49
entries
9
designers
Postcard wanted for wedding lighting company
A$199
We sell wedding lighting and styling services to wedding planners and stylists.
43
entries
15
designers
postcard or flyer for Shoebox Photo Booth, Inc
$249
We are a mobil photo booth rental service for weddings, birthday parties, corporate events, etc.. View website for…
19
entries
5
デザイナー数
Apple Tree Cakes & Crafts Ltd needs a new postcard, flyer or print
£139
Run by Cake Designer, Rebecca Allen-Pugh, we create beautiful, bespoke wedding cakes, celebration cakes, cupcakes…
105
entries
29
designers
A story you will never forget
US$299
We help you tell the story of how you met with a professional video. The main target those about to get married. We p...
45
entries
17
designers