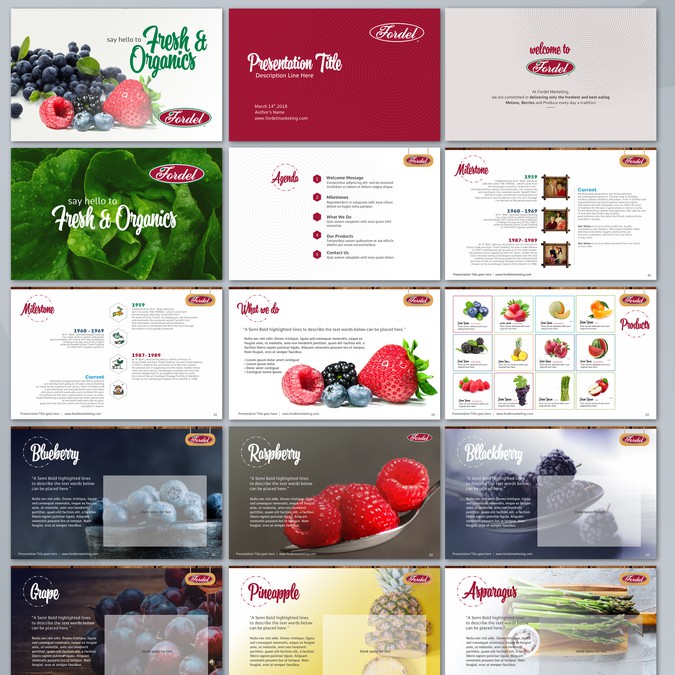 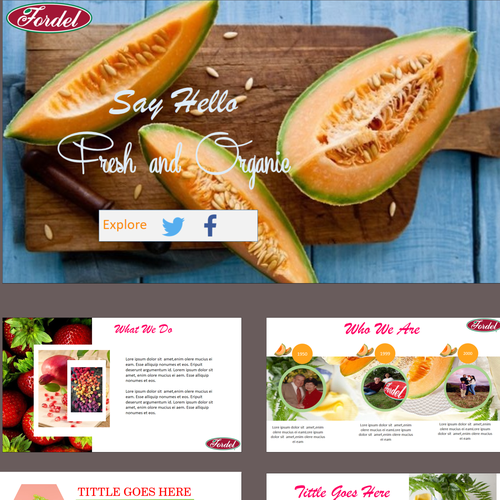 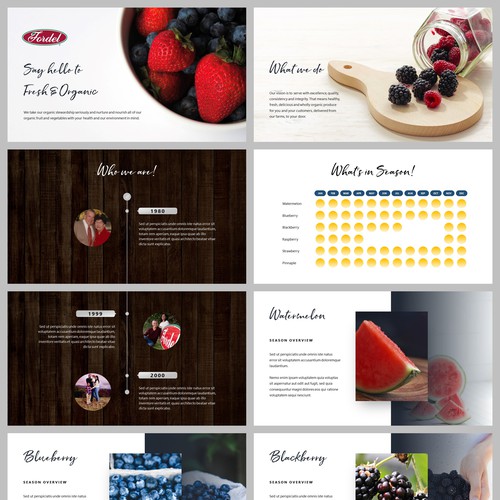 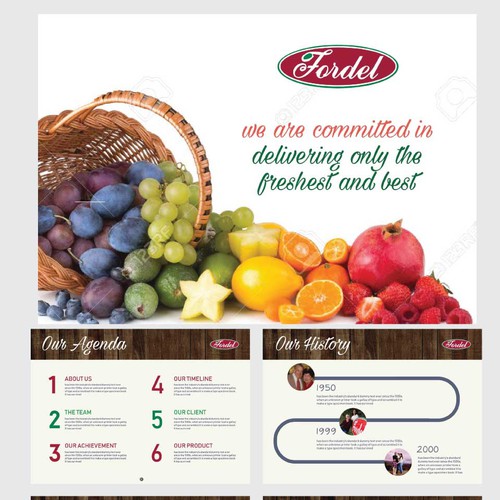 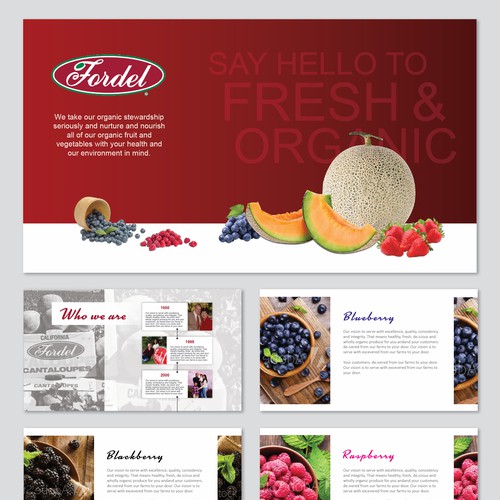 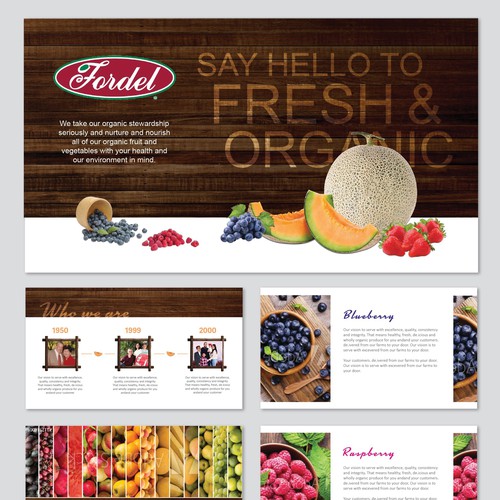 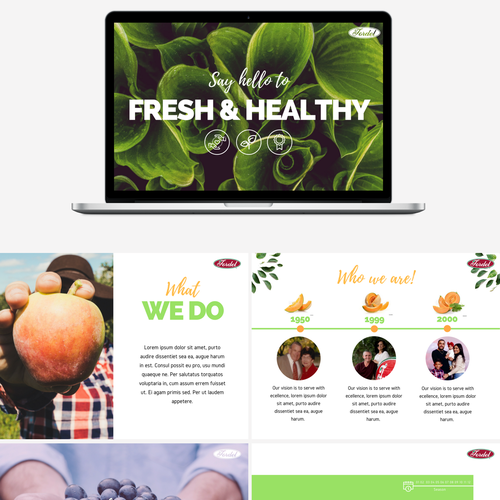 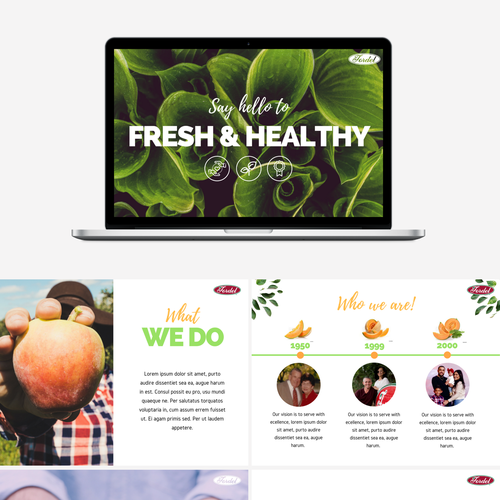 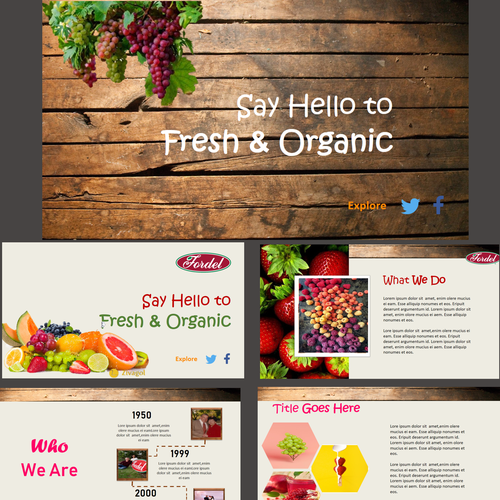 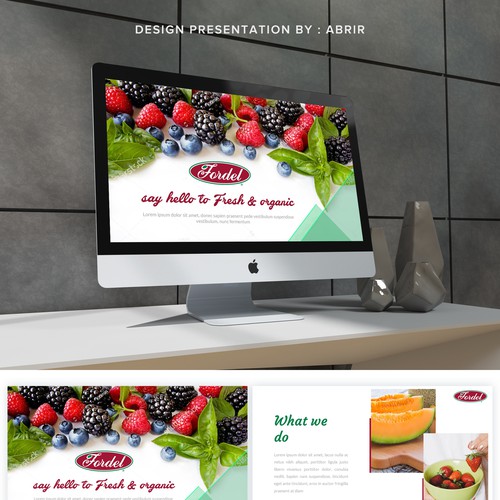 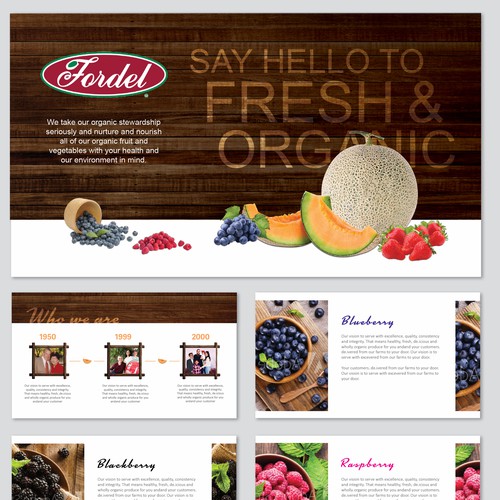 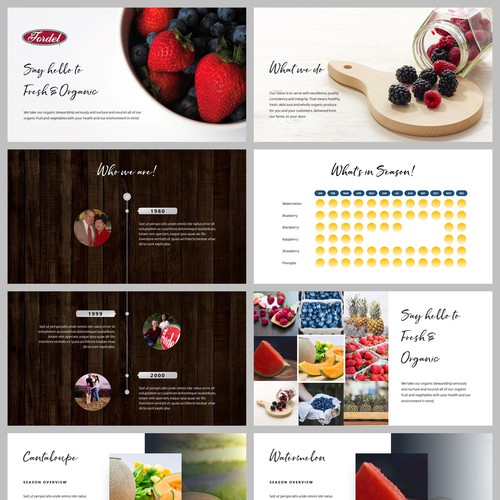 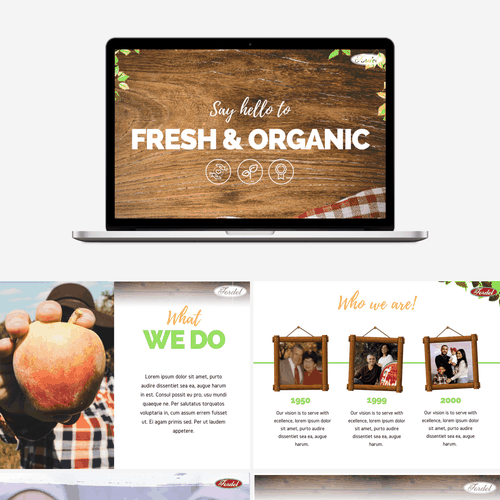 This is a RUSH ASAP MOMENT!!!!

Need this as fast as possible!!

Buyers of produce in Safeway, Whole Foods, Walmart, Costco...
We sell fresh produce...
Refer to attached calendar for the list of produce..

Only organic we have is Blueberries

We had a previous company we did however we need the entire presentation to be changed to Fordel Marketing and using the Fordel marketing brand and story..
we need a slide for each product

Melons and then followed by Berries(Blueberries Blackberry, Raspberry and Strwaberry), Pineapple, Grapes, Tree Fruit and Asparagus and Pomegranates. Refer to attached calendar..

Here is what the company
HISTORY:
At Fordel Marketing, we are committed in delivering only the freshest and best eating Melons, Berries and Produce every day a tradition established in 1959 from W.R. “Bob” Johnston. The Fordel name came from the Norwegian meaning “to benefit from” when Bob’s wife JoAnn accidentally brought home a Norwegian/English Thesaurus instead of the Spanish/English version he asked her for to find that special company meaning from. He believed that Family, his Employees, the Community and eventually the consumer would “benefit from” that hard work, commitment and persistence that everyone contributed too from the farm through the delivery of the goods produced. He began farming row crops such as cotton and grains in 1959 and eventually fell in love with the production of Melons by the end of the 1960’s when he formed Silver Creek Packing in 1969 with 3 grower partners. After almost 20 years of production in one the most modern shed packing facilities around, he decided to sell his interests in Silver Creek and start “Field Packing” his own Fordel Melons in 1987 a method not yet proven or of the main stream. His passion was in supplying only the ripest, Golden Straw Color and best eating Cantaloupes available and this new method allowed him to accomplish that when he built the state of the art Cooling & Storage Facility in Mendota(known as the Cantaloupe Capital of the World) in 1988. Today almost 90% of all California and Arizona Cantaloupes and Honeydews utilize this same packing and cooling process. Bob was married to JoAnn Johnston(who passed in 1995) for 42 years who raised their 3 children and worked by his side and supported his vision every step of the way where he carried on that passion until his passing in 2008. If you ever choose to fly into Mendota you will land at the “W.R. Bob Johnston Municipal Airport” dedicated to him for the many years of service and generosity he gave to the community and his dedicated employees. Today, Randy(Second generation) and Alicia Johnston are working hard going on 30 years now at building on those family traditions and values instilled in them and learned from working with and by their side. Randy and Alicia own Fordel Marketing and the Fordel brand and have four children(Xandria, Blake, Jayden and Randi) and two grand-children(Frankie and Reign) who are learning those same principles and values and will eventually carry on these 58 years of tradition for the next 2 generations or more to come. Fordel Marketing’s grower base/partners take special care of and work hard every day to grow, pack and cool only the safest and finest Produce items available in season.

This is a corporate presentation that will be shown to all major buyers of produce in every main chain store...