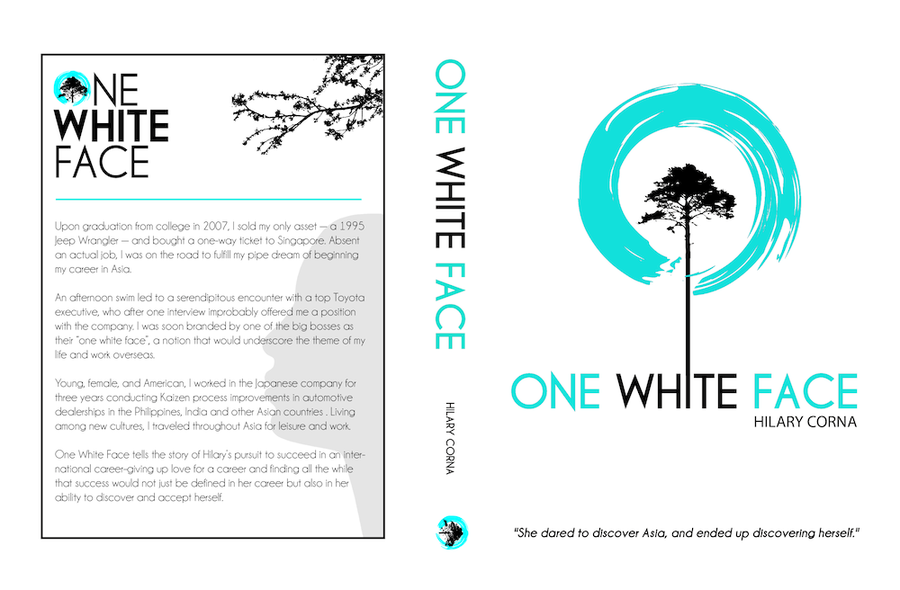 The book, One White Face, needs a Book Cover Design 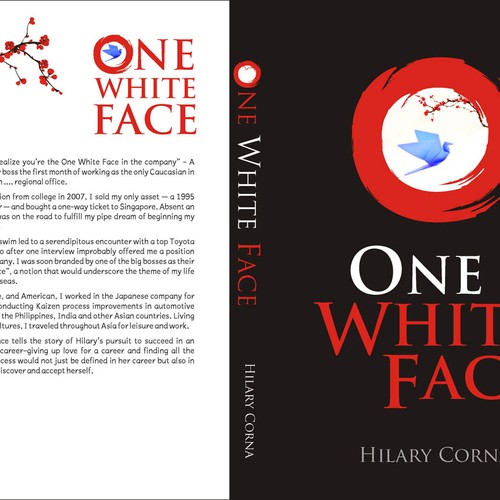 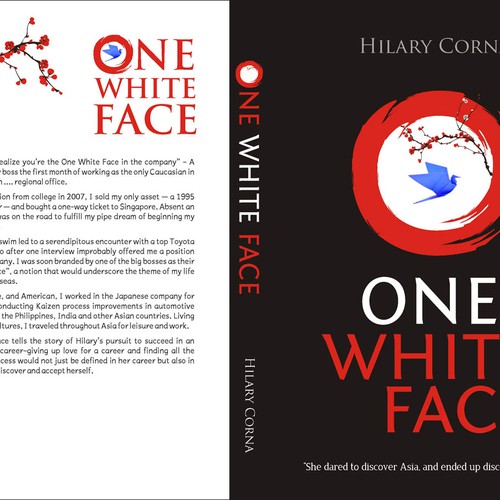 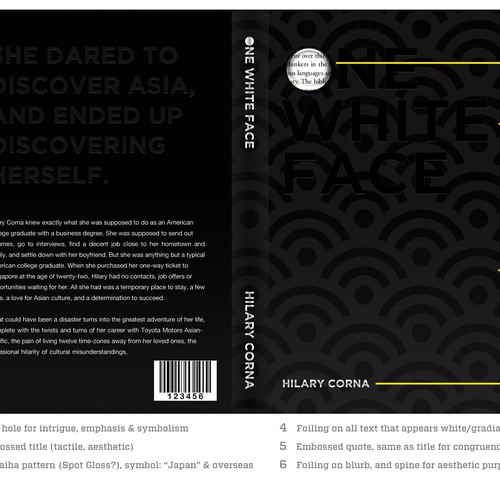 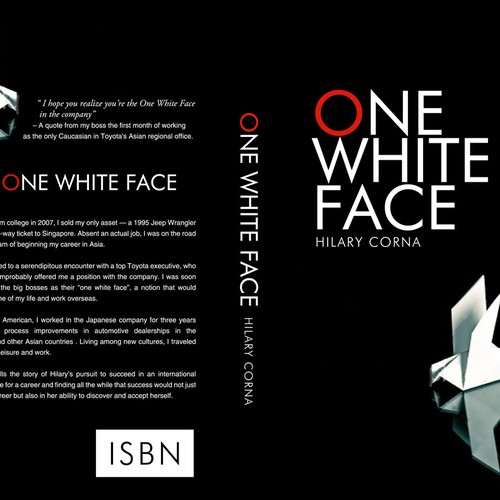 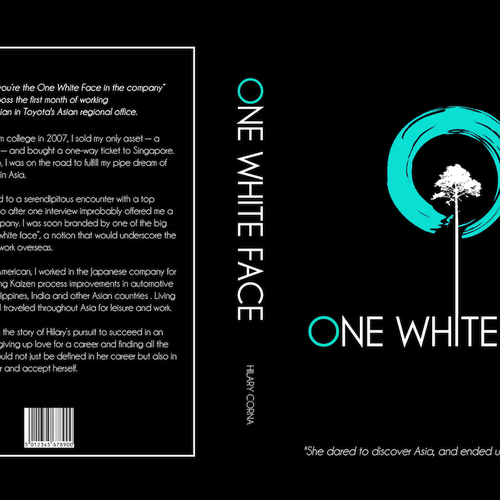 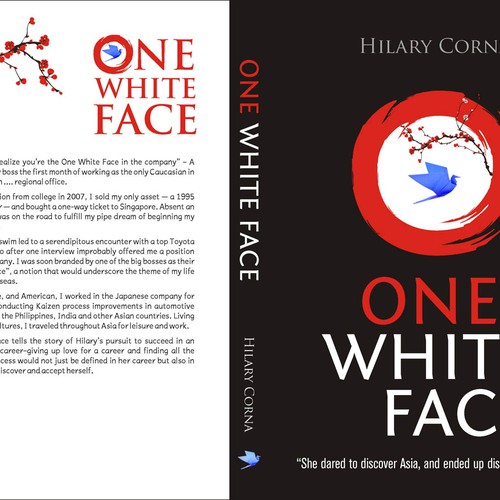 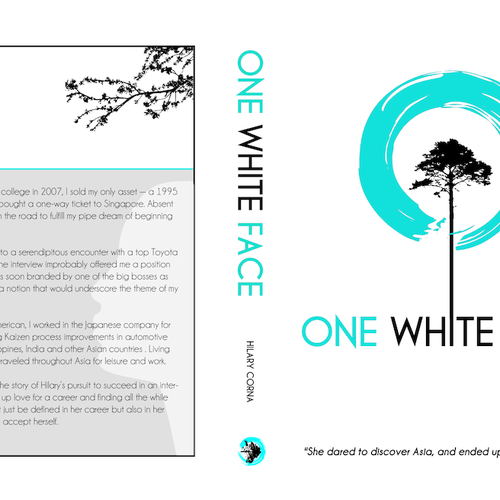 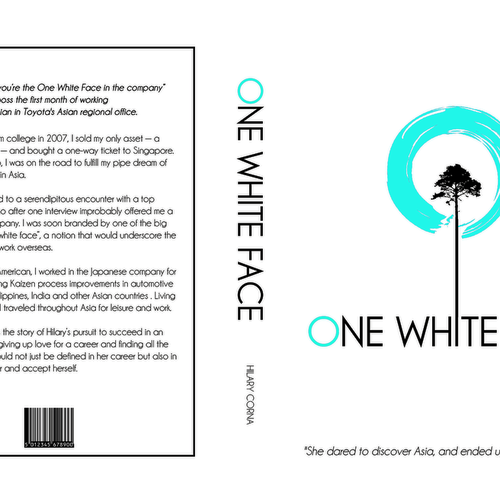 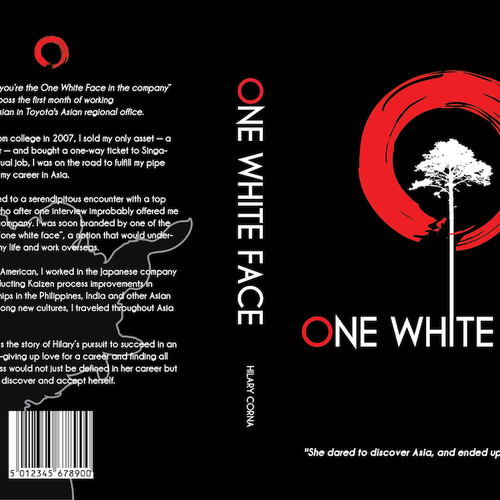 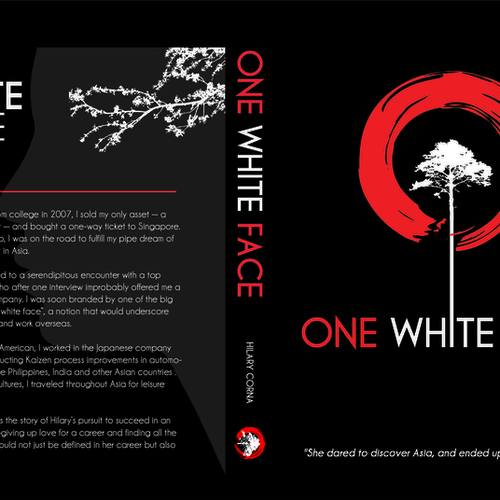 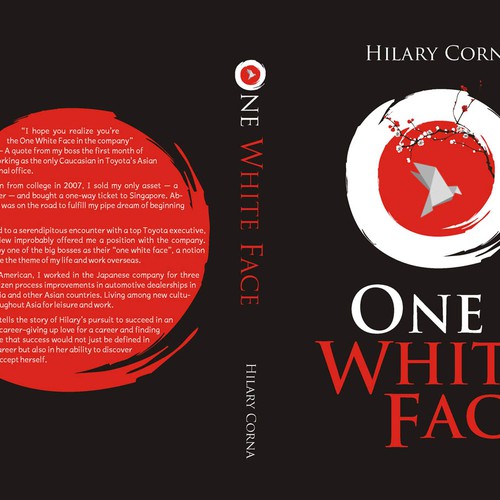 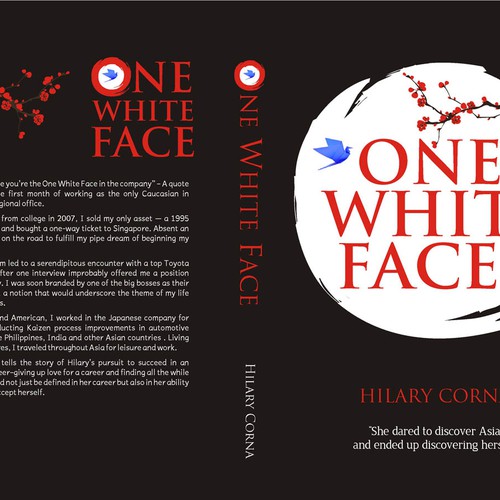 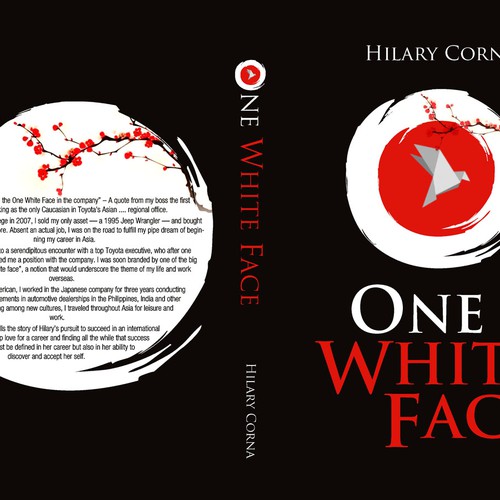 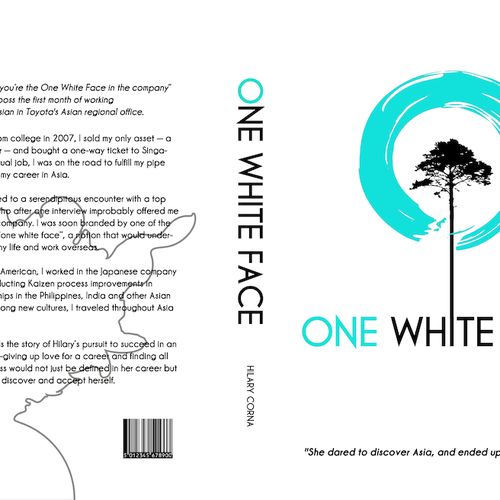 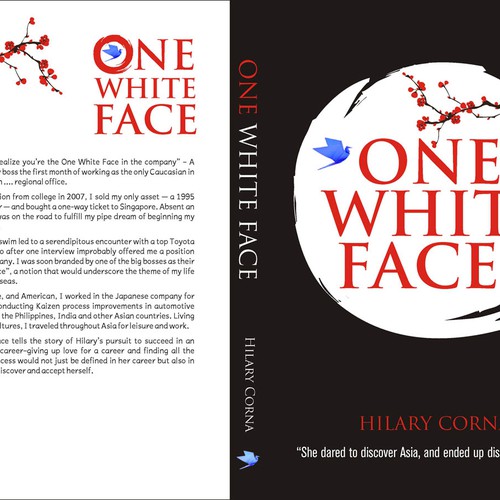 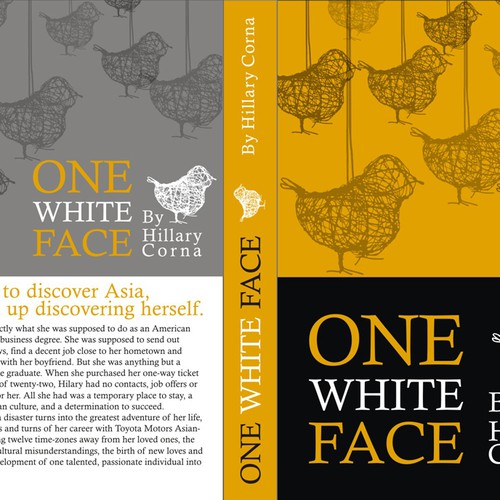 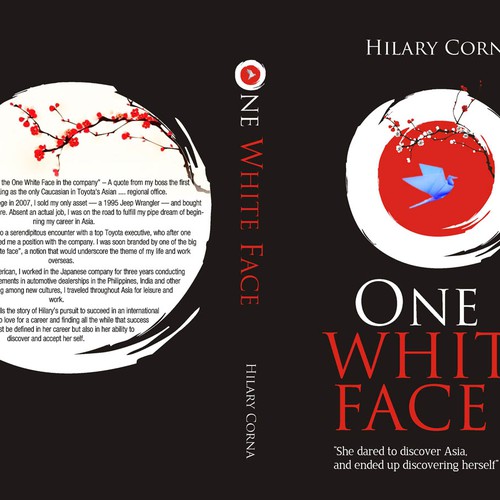 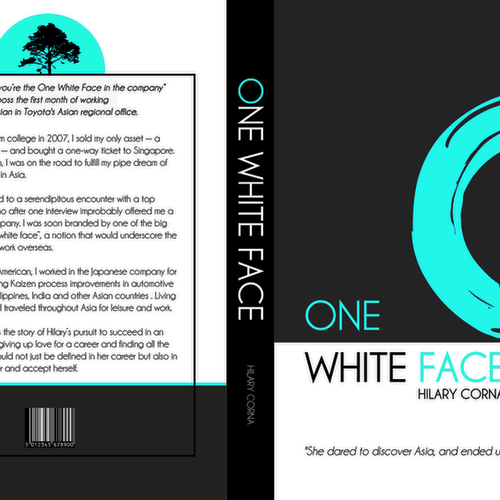 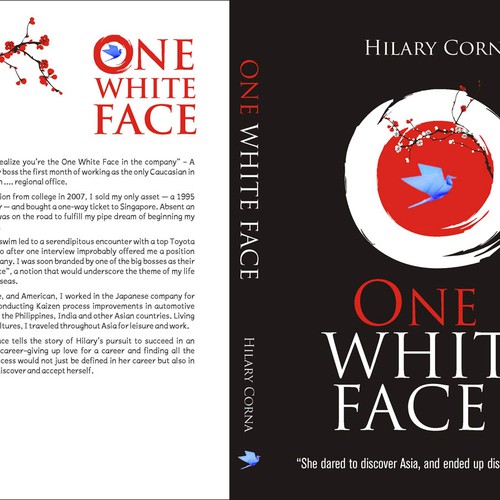 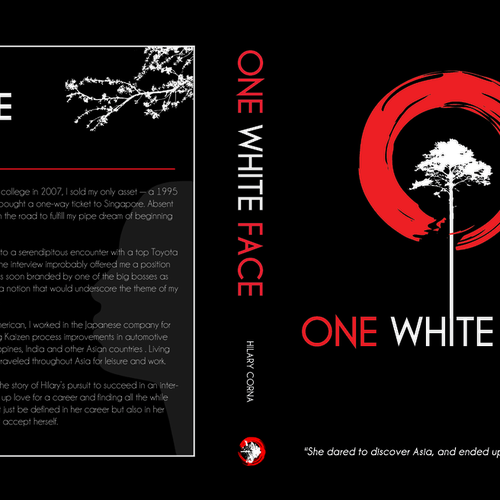 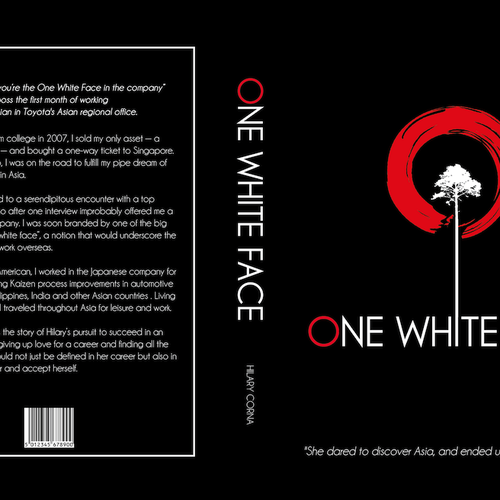 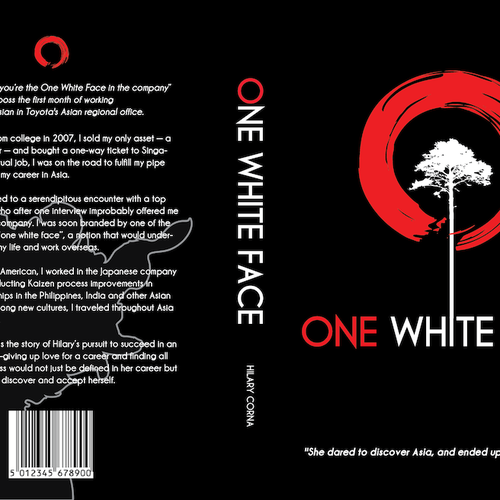 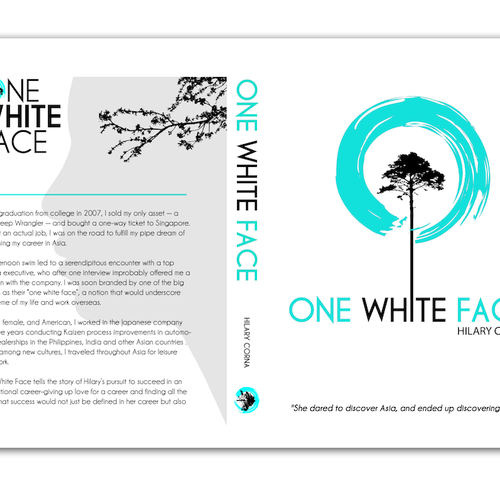 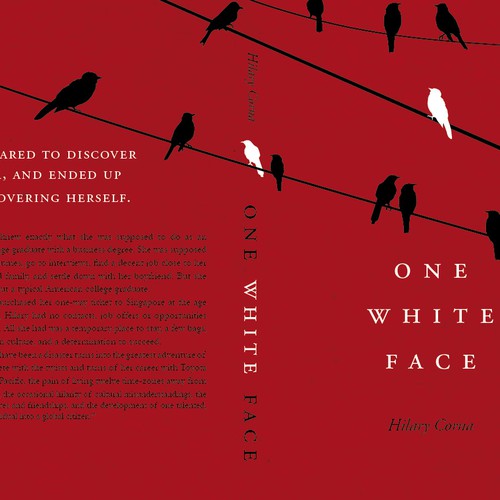 I'm an author and speaker and am planning a ten week corporate sponsored book tour this fall around college campuses in the midwest. On behalf of the companies, I'll speak on entering the real world, global mindedness, and staying true to your values for Generation Y

A hard back 6x9 page book cover design. The book is approximately 250-300 pages long. The design should be in high resolution--no JPEG. I'll need the design first, without layout details or spine width. I will keep in touch with the designer in order to apply any changes of the layout details and changes of any text, but expect that the designer will make these minor changes free of cost.

The design should be simple but sharp and edgy. Asian design/flare is welcome--almost zen-like. I like things that are symmetrical, harmonious, and striking. I want you to be as creative as possible--the skill i lack. Have fun with it!

I don't the book cover to be hiding face, because the book is a happy story about finding my face. I don't want to use a mannequin image of a face--but more like a drawing. Even though though the book is set in Asia, it is not all about Asia--this is just the context.
The book is about taking risks and approving yourself, going against the status quo, giving up love for a career, making sacrifices and dealing with the ramifications of your decisions. It's about searching for acceptance and discovering that all along you needed to accept yourself. It's about traveling and appreciating cultures. It's about life as an expatriate and how that changes you. It's about loneliness. It's about missing home.

The only image I've had in my mine, from the beginning, has been a pure black front and back cover with the entire front cover being the profile of non-gender biased face, that is stark white.

“I hope you realize you’re the One White Face in the company” – A quote from my boss the first month of working as the only Caucasian in Toyota's Asian regional office.

Upon graduation from college in 2007, I sold my only asset — a 1995 Jeep Wrangler — and bought a one-way ticket to Singapore. Absent an actual job, I was on the road to fulfill my pipe dream of beginning my career in Asia.

An afternoon swim led to a serendipitous encounter with a top Toyota executive, who after one interview improbably offered me a position with the company. I was soon branded by one of the big bosses as their “one white face”, a notion that would underscore the theme of my life and work overseas.

Young, female, and American, I worked in the Japanese company for three years conducting Kaizen process improvements in automotive dealerships in the Philippines, India and other Asian countries . Living among new cultures, I traveled throughout Asia for leisure and work.

One White Face tells the story of Hilary’s pursuit to succeed in an international career–giving up love for a career and finding all the while that success would not just be defined in her career but also in her ability to discover and accept herself.

"She dared to discover Asia, and ended up discovering herself.

Hilary Corna knew exactly what she was supposed to do as an American college graduate with a business degree. She was supposed to send out resumes, go to interviews, find a decent job close to her hometown and family, and settle down with her boyfriend. But she was anything but a typical American college graduate. When she purchased her one-way ticket to Singapore at the age of twenty-two, Hilary had no contacts, job offers or opportunities waiting for her. All she had was a temporary place to stay, a few bags, a love for Asian culture, and a determination to succeed. What could have been a disaster turns into the greatest adventure of her life, complete with the twists and turns of her career with Toyota Motors Asian-Pacific, the pain of living twelve time-zones away from her loved ones, the occasional hilarity of cultural misunderstandings, the birth of new loves and friendships, and the development of one talented, passionate individual into a global citizen."

Comienza ahora
Ohia Advisors - Logo and Brand
USD 429
We will provide scientifically-informed coaching and consultation to organizations, with an initial focus on helping tea
51
entries
12
designer
Design a Sleek New Logo for a Solar Energy Company
299 $US
residential solar panel installation and other energy solution services
37
entries
14
designer graphistes
Bold and unique plumbing and heating design that stands out from the rest!
US$299
Provide plumbing, heating and A/C services for both residential and commercial jobs.
52
entries
12
diseñadores
Design a logo with a purpose! Vintage, hipster, coffee enthusiasts welcome!
US$299
We sell coffee, grown by the local farmers on my grandmother's land in Haiti. Madame Luc, my grandma has been growing an
15
entries
8
diseñadores
portraying a parents love for their baby
AUD 799
selling baby clothes and products such as soft toys, dummy clips. target audience = mothers/ parents
14
entries
7
diseñadores
Need a logo for my "startup"
USD 299
Provides off-chain data to the ethereum network
106
entries
24
diseñadores
Más información sobre diseño de impreso o envases
Vea como funciona