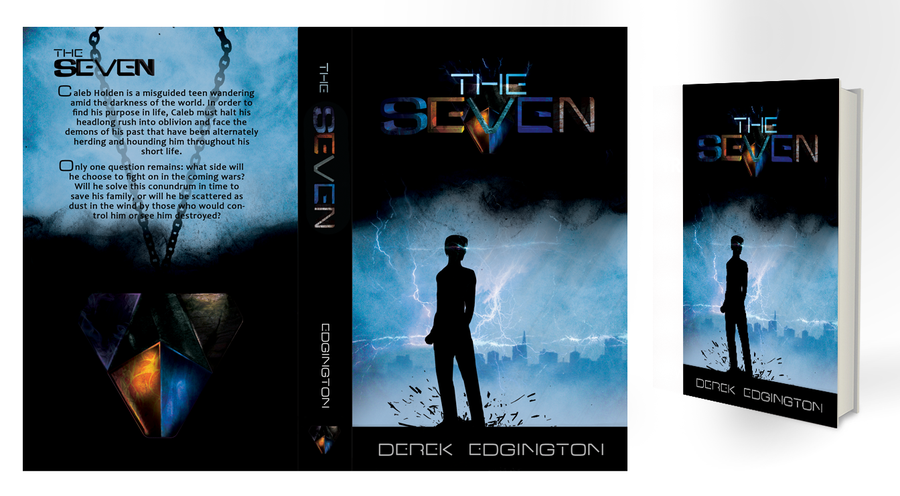 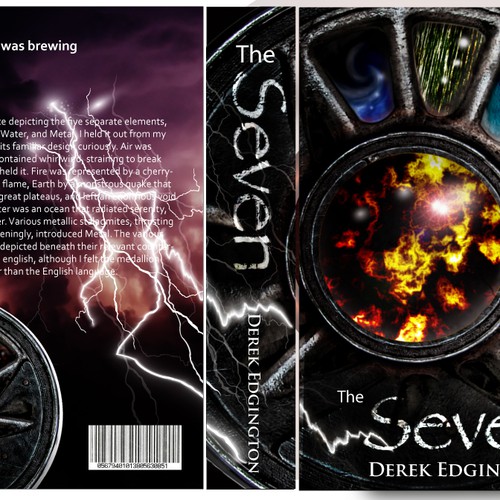 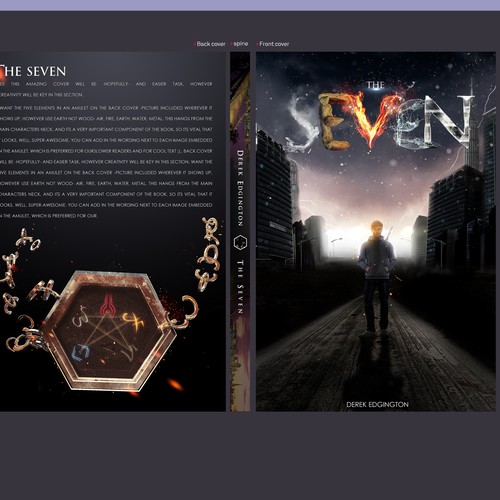 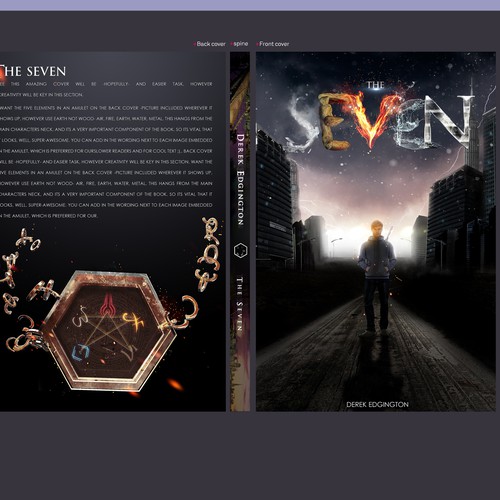 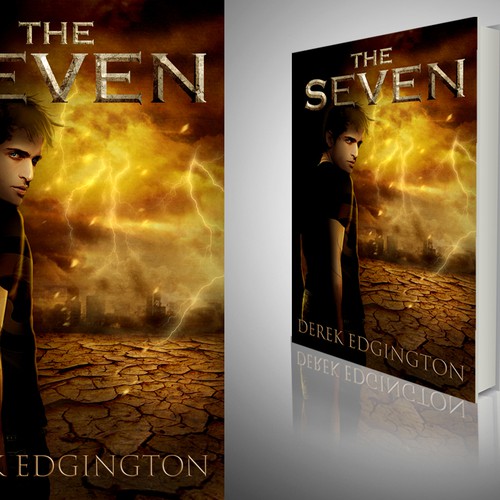 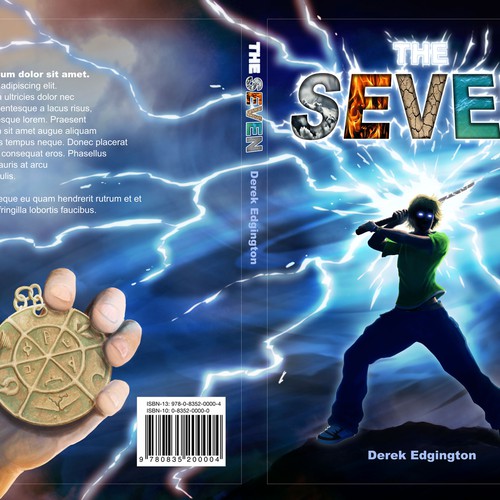 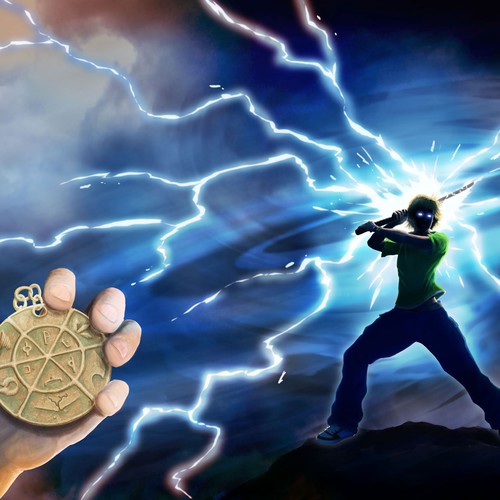 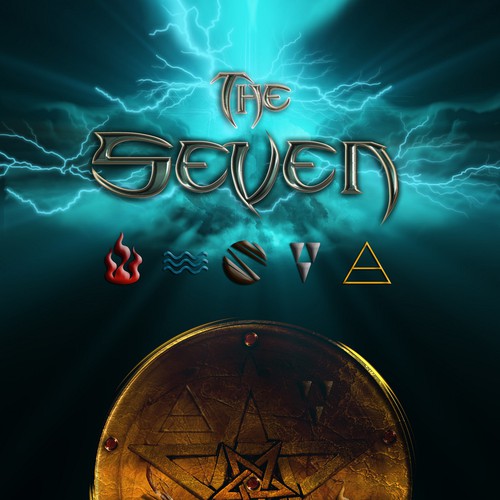 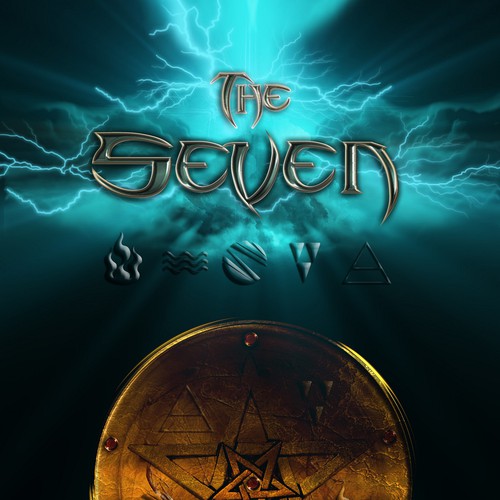 Well, i'm writing a book so i suppose it writes books for me.

I want a book cover designed for a YA Sci-Fi / Fantasy novel. On the front cover, i would like the title "The Seven" - here's where it gets interesting. I'd Like "The" to be made of out lightning, and "S-E-V-E-N" (each individual letter) to be Air, Earth, Fire, Water, Metal. There Isn't any set order in this case, so whichever way appeals to you most- go for it. The front cover continued: i want a 17-year-old looking -this is where my previous statement will be contradicted- boy, however i want the design of him to be so vague (features shrouded in darkness/ etc) that you can imagine virtually anything about the character. Another contradiction- i want ice-blue eyes to be what stand out from this enshrouded figure (You can employ the lightning here as well if you so wished). Around the main character, i want lightning galore- you can do whatever you think is artistically pleasing in this matter - little bits of it that surround him in bubble-like masses, Entire arcs of it, stabbing pieces, the list can go on and on. (Hell, you can add in burnt and destroyed ground, if you so wished) For my name, just plain Derek Edgington, if you'd like. You can go for just plain old text color that looks good with your creation if you want, but if you'd like to get creative here as well i wouldn't mind at all.

So far i thought that would do for the front cover, but some additional information for the book is that it mainly transpires in San Francisco, CA. If you so wished to add in a backdrop in there, and you thought you could make me like it, then i would go for it. Just keep in mind that the above specs are the ones i would like for sure.

Optional front cover- If You'd like to add in hair, blond would be the color to use.
A japanese katana is also involved, but make sure to note that the color is described as a metallic-ish metal of unknown origin. The Hilt will change colors, so i suppose you could go crazy in that regard.
________

The back cover will be -hopefully- and easier task, however creativity will be key in this section.

I want the five elements in an amulet on the back cover -picture included wherever it shows up, however use Earth not wood- Air, Fire, Earth, Water, Metal. This hangs from the main characters neck, and its a VERY important component of the book. So its vital that it looks, well, super-awesome. You can add in the wording next to each image embedded in the amulet, which is preferred for our slower readers and for cool text ;), but if you want to do without it go ahead. You can add a chain into this as well, since it is in fact hanging from his neck. I'd like this laying over a completely black background.

The spine: Derek Edgington, or just Edgington for the author, of course. The Seven- you can steal the titles creation and smack it in here if you'd like, or do something along those lines but a little different- your choice. Get creative here, i'd love to see what comes of it. for my logo at the very bottom of the spine, a small version of the amulet would be great. I wouldnt mind seeing all of this overlaid on the picture of the bridge i provided

I want something where you go through the young adult section of the bookstore, and stop because you see something out of the corner of your eye on the new arrivals bookshelf. Then you turn your head, and see a -excuse the jargon of a teenager- totally awesome book cover staring out at you. You pick it up, and you continue to be amazed by its content. Cha-Ching- thats the sound of money being made. I believe that presentation is key in selling any kind of product, and book covers are no different. And so i'm looking for something that will totally knock my socks off.

(Creativity will be applauded)

i have a few questions about your book cover, do you want the placement of the title to be upper or downer or maybe in the middle of the page,and what size(1/5 of cover or...)??can you tell me more about the boy(all details that you want) and the city in the background!!...is it a modern city,destroyed,dark,futuristic...what kind of weather...day ,night...etc!...tell me everything you want, i can do anything,its just up to you how good you describe!

Okay lets split this into parts-
Title- Top of the book, around 1/5 is acceptable but anywhere around there is fine
It's a modern urban fantasy so current time- in SF, CA
An inky black cloud would add to the overall image- its vital to the plot later in the book- so stormy weather would be appropriate- you can add in rain, and lightning to set the mood since lightning is also very important
The description of the character is a little more complicated to answer- although i do flesh out his image in the book, generally i want him to be pretty vague so that the readers can visualize their own image of the person rather than one being thrust upon them right away. - so things like the blond hair and ice blue eyes will stand out yet not give away many details and also won't cement an unwanted image of the character in the readers mind. Generally, he's 6 feet in height so do with that what you will. I can give you the chapter where i actually describe him if you like as well- whatever you want.

Description of amulet as per request by designer NOTE: that its not necessary to follow these guidelines- i can change the description as per your design. this is not set in stone whatsoever.
__________
It was a necklace depicting the five separate elements, Air, Fire, Earth, Water, and Metal. I held it out from my body, studying its familiar design curiously. Air was depicted by a contained whirlwind, straining to break the bonds that held it. Fire was represented by a cherry-hot inferno of a flame, Earth by a monstrous quake that separated two great plateaus, and left an enormous void in its wake. Water was an ocean that radiated serenity, and great power. Various metallic stalagmites, thrusting upwards threateningly, introduced Metal. The various elements were depicted beneath their relevant counterparts in flowing english, although I felt the medallion was much older than the English language.

Note: circular in shape, but this can also be changed as to whichever you think will come out the best. i'm not going to be picky here.

Target audience is YA, as described above, so teenagers, but im not excluding those older. Mainly this should just be a cover that screams: wicked cool, i want to look into that.
a .Psd would be nice, but no set format.
You can do this through any type of design- illustrator, psd, lightroom, drawing, painting, whatever. =)

I plan to get my design done here- and i am open to any suggestions. I also am planning on guaranteeing once i see some interesting products coming in.