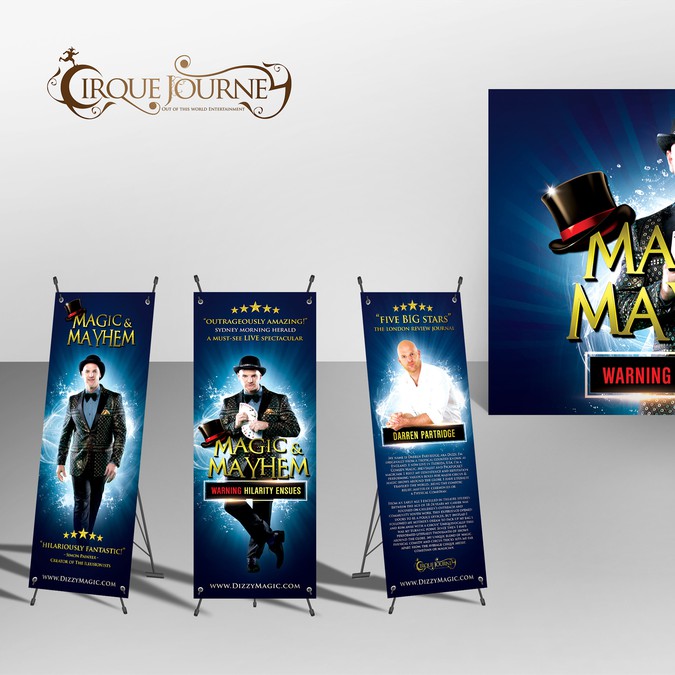 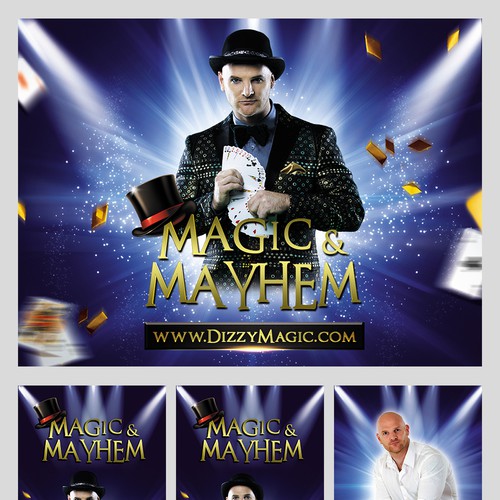 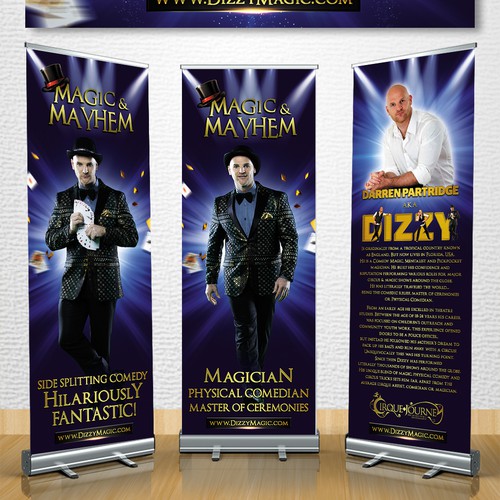 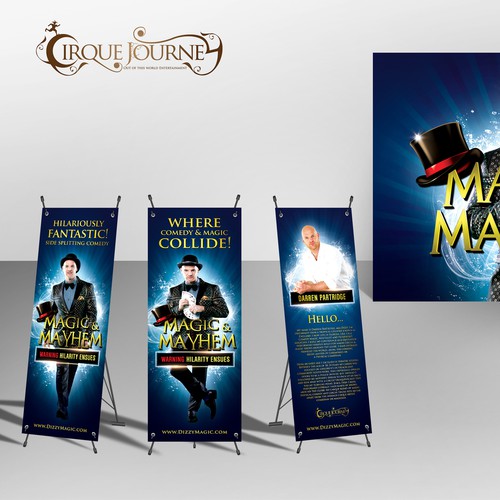 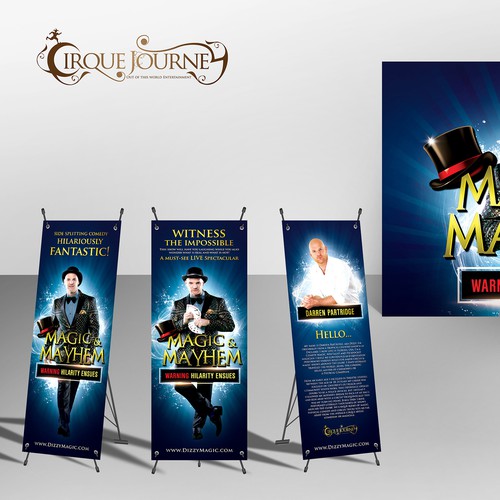 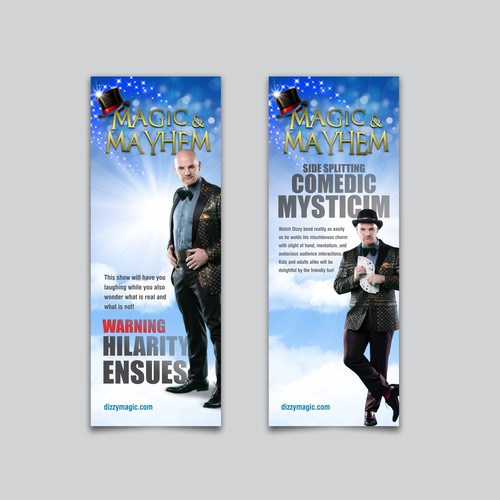 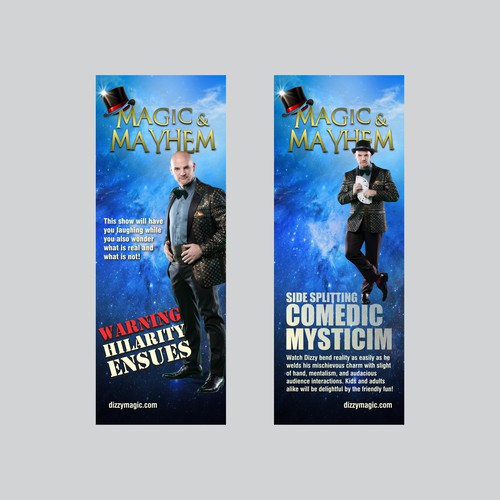 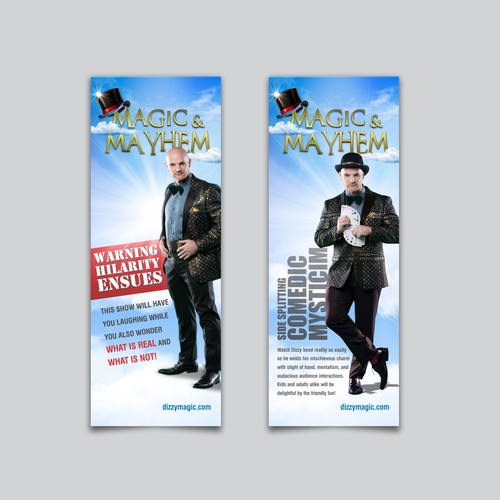 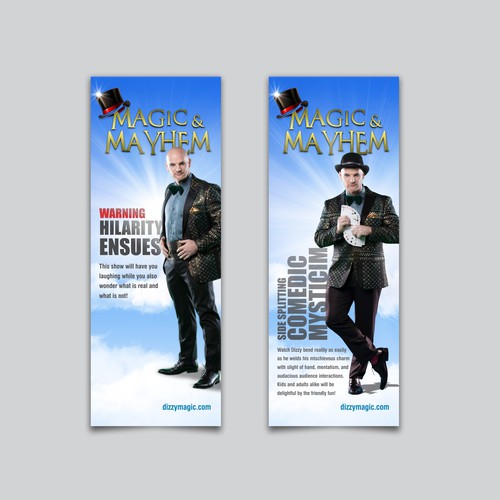 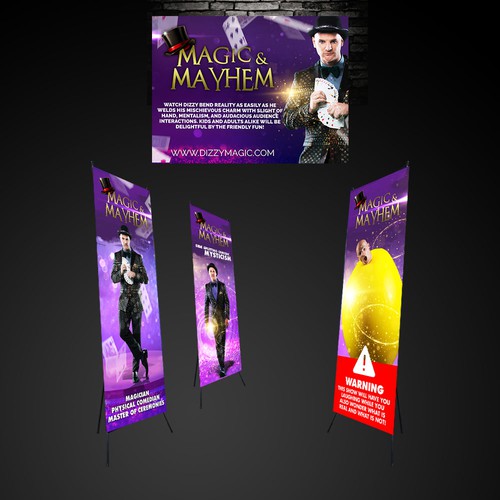 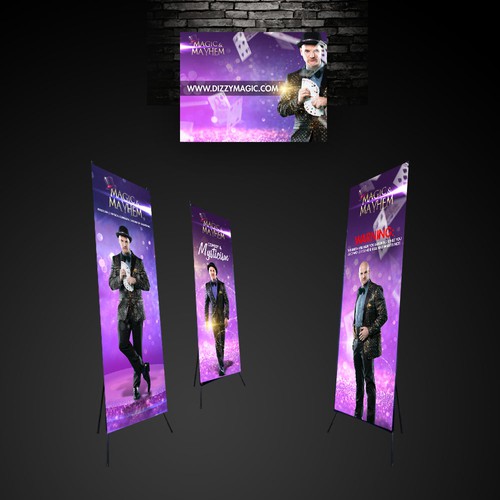 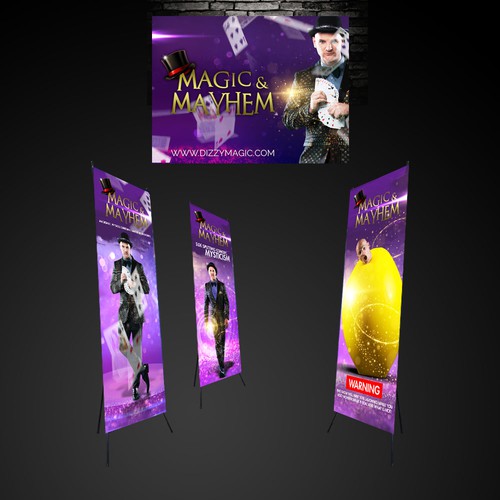 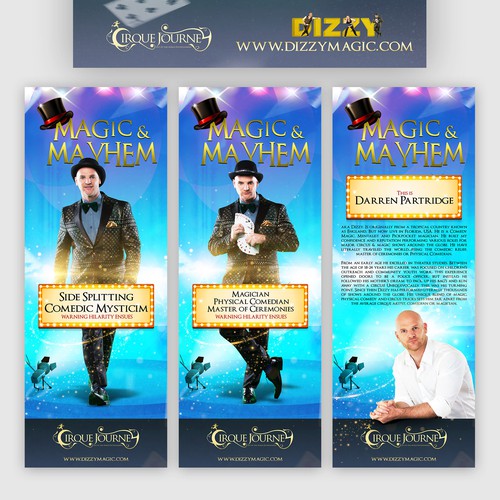 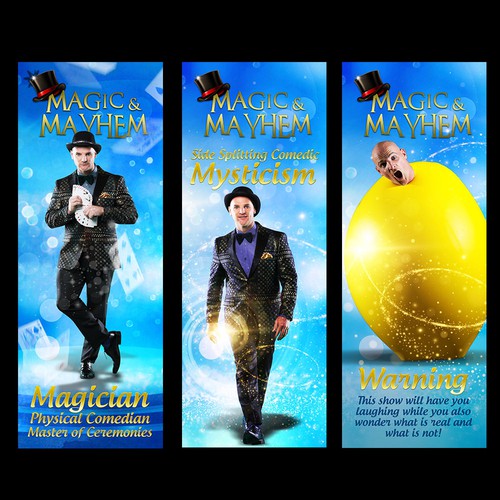 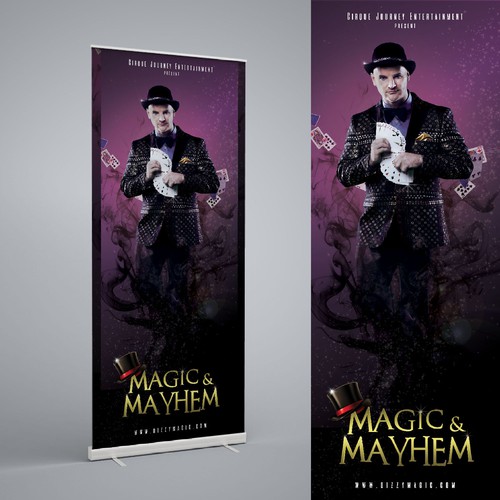 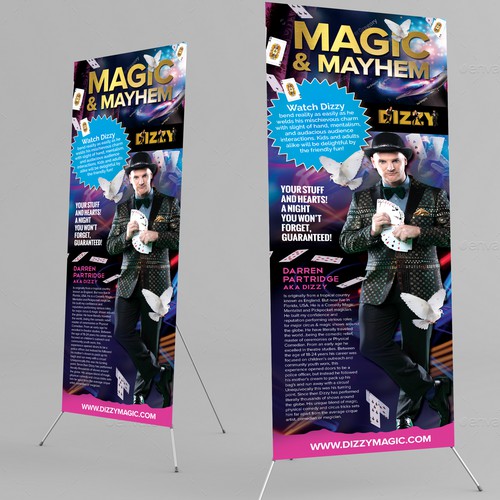 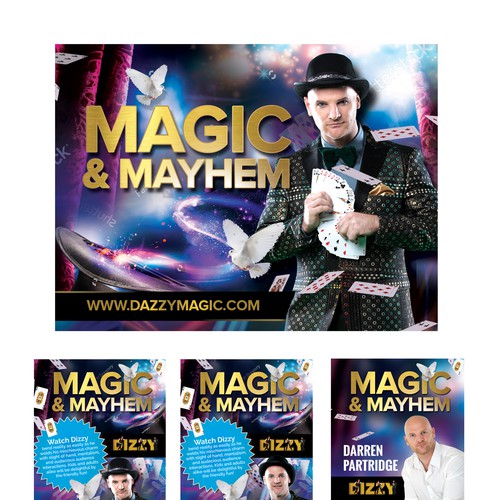 Cirque Journey Entertainment needs four Banners for a tradeshow to be designed.

The product is myself - Dizzy (I'm marketing my Magic show)
The company name is 'Cirque Journey Entertainment' (So this can be very small, Or not used at all)
The Show I perform is 'Magic & Mayhem'

My Website http://www.dizzymagic.com - Can be used on the design.

I'm needing photos and bold easy to read text, the colors to use (I think) should be Light Blue, White & Bright Pink - See the light Blue poster attached for reference!

See other Booth examples for reference to the competiton. (Booth 1, 2,3 jpg)

This is what I need, and there is a possible need to work with one to one after the winning design is choosen!

Each Banner should be matching with color coded the same style etc..

*The Wall Banner - Maybe have the website 'http://www.dizzymagic.com' as the centre focus.

*One of the Banner stands - Maybe have a picture of me with my Bio - Darren Partridge, aka Dizzy, Is originally from a tropical country known as England. But now live in Florida, USA. He is a Comedy Magic, Mentalist and Pickpocket magician. He built my confidence and reputation performing various roles for major circus & magic shows around the globe. He have literally traveled the world...being the comedic relief, master of ceremonies or Physical Comedian.
From an early age he excelled in theatre studies. Between the age of 18-24 years his career was focused on children’s outreach and community youth work, this experience opened doors to be a police officer, but instead he followed his mother’s dream to pack up his bag's and run away with a circus! Unequivocally this was his turning point. Since then Dizzy has performed literally thousands of shows around the globe. His unique blend of magic, physical comedy and circus tricks sets him far apart from the average cirque artist, comedian or magician.

*Other text if needed could be pieces of this blurb: Watch Dizzy bend reality as easily as he welds his mischievous charm with slight of hand, mentalism, and audacious audience interactions. Kids and adults alike will be delightful by the friendly fun!
OR
Warning: This show will have you laughing while you also wonder what is real and what is not!
Dizzy’s fast paced physical comedy and mind twisting Mysticism is so mind bogglingly hilarious and friendly,
This show is a true delight and is loved by kids and adults alike - From Sleight of hand, Mentalism to "stealing"
your stuff and hearts! A Night you won’t forget, guaranteed!
OR
Expect many “wows” as
internationally acclaimed performers Dizzy and Janna perform out of this world magic, acrobatics and hilarious physical comedy.