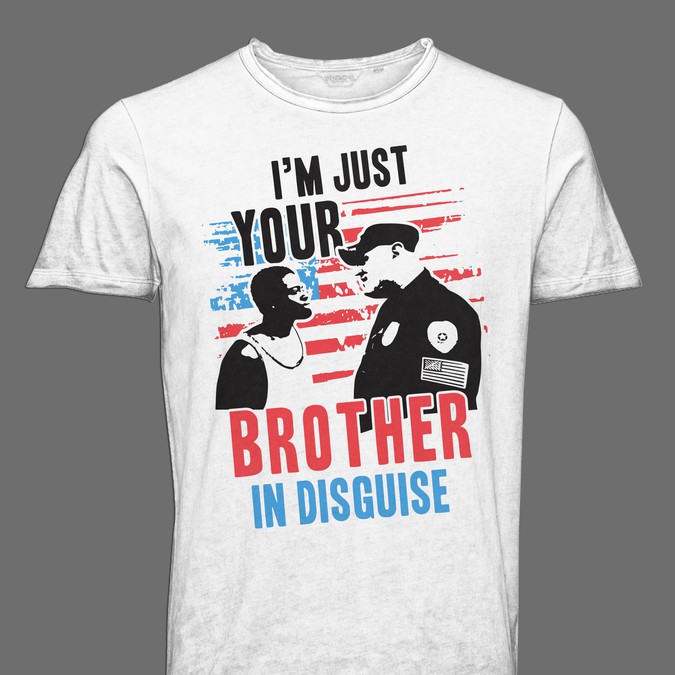 'Just Your Brother In Disguise

We want to create a shirt that is freakin' sweet, and that the millennial generation would want to wear. So please throw conventions out the window for this one. Something unique, creative, and full of life.

Choice of font, shapes, aesthetic are up to the total discretion of the designer. I would just ask that you stick with the color scheme that is laid out for you in the description, or some closer variety of these colors.

Please create this artwork to be displayed on a standard white t-shirt.

Please use the following phrase on the shirt: "If you think about it I'm just your brother in disguise."

If that seems like too much text for the design concept you want to create, use "I'm just your brother in disguise," instead.

I've included a still frame from a film project called Footprints that we will be releasing to the public very soon. We are going to associate the film with a new social movement in our country called Human Lives Matter, with a goal of facing difficult issues in our country together, and seeking unity in the U.S. So, this design will be one way someone can tangibly begin to participate in the movement. By wearing the shirt, they become a billboard for these ideas, which is what we want.

I am attracted to the idea of this still image being incorporated into the shirt somehow. I think it should be traced and vectorized, though. And you'll want to only focus on Justin (the film's main character), and Officer Edwards. I've also attached an image of a design mockup that shows one example of what this might look like.

I'm open to the idea of seeing the design without the photo incorporated if you think your design is cool without it. So there's freedom to try something else with it.

Essentially the theme of the shirt is that, in the face of the tension in the country between police (specifically white officers) and the African American community, we can find a common bond in that we all belong to same race, the human race, and that a time is coming in our country that we begin to face these issues head on, and find ways to overcome them, TOGETHER!

So to be frank, I really don't want a cheesy design, I believe we need something that's sick! I trust in your design intuitions and your capabilities to develop a visual theme that could make this concept work. So, know there is freedom to experiment and try something that you think is cool! If you love it, than more than likely I will too. It may be hard to pick a winner, because I know so many of you are talented at what you do. Thanks for considering helping with this. I hope that one of you guys will knock this out of the park for us!

The t-shirt will be hosted on a company called Spread Shirt's website (https://www.spreadshirt.com). So you may want to check out their website for design specifics for file formats, dimensions, color issues, etc.