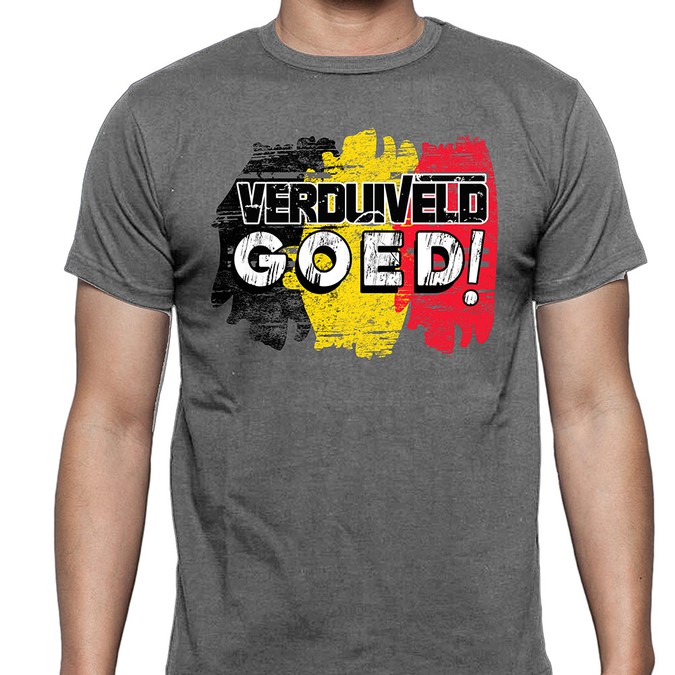 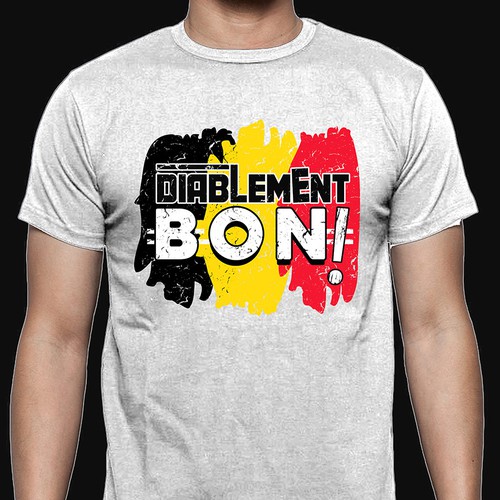 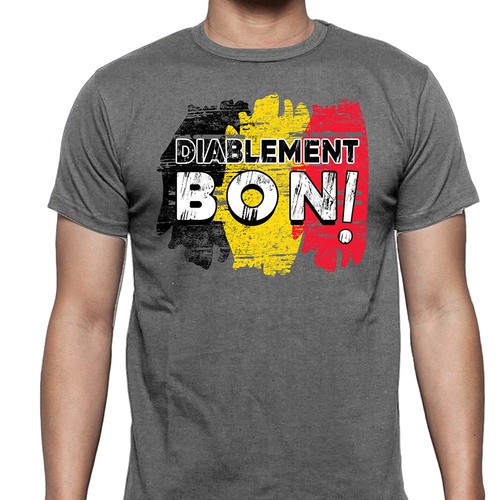 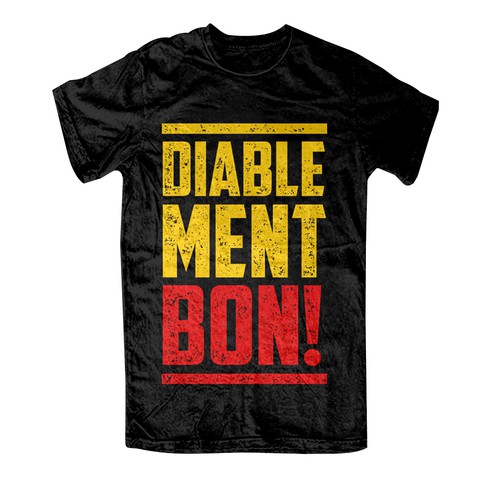 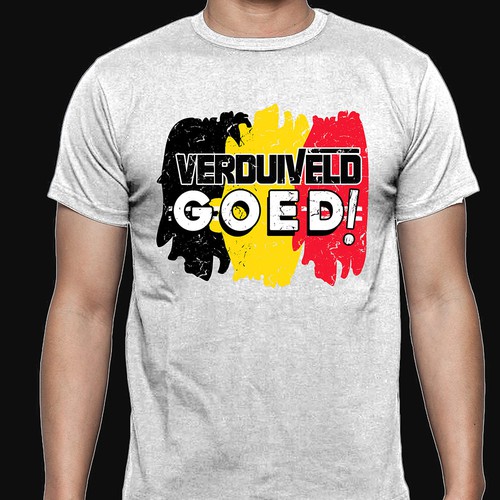 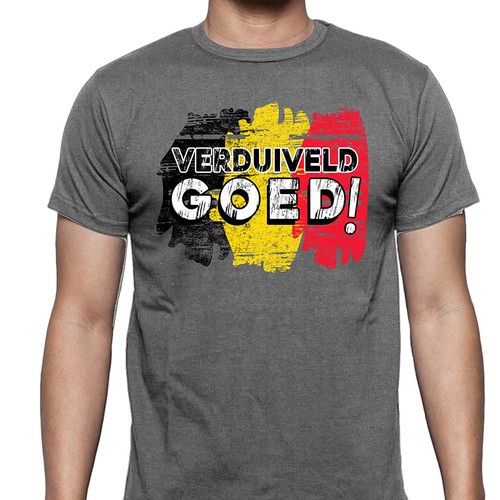 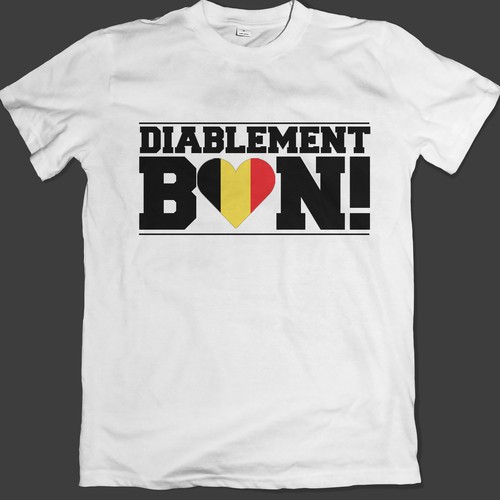 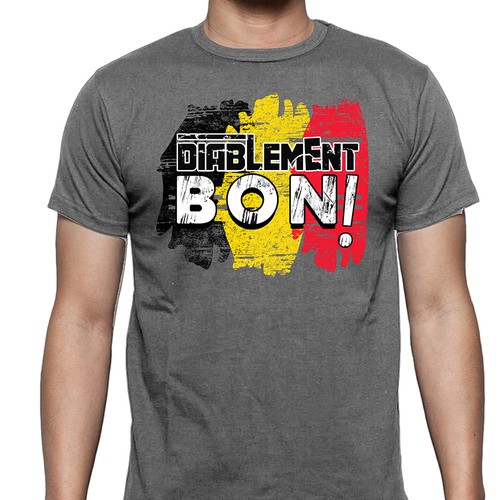 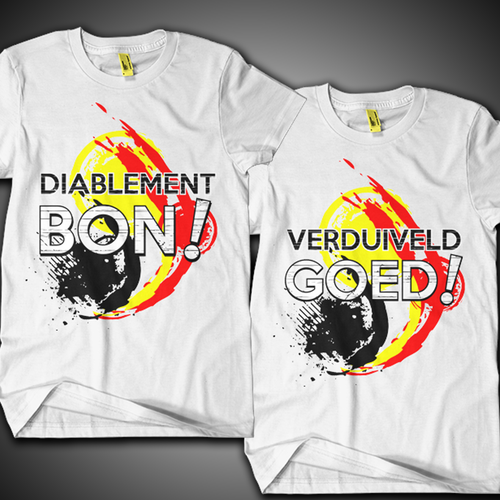 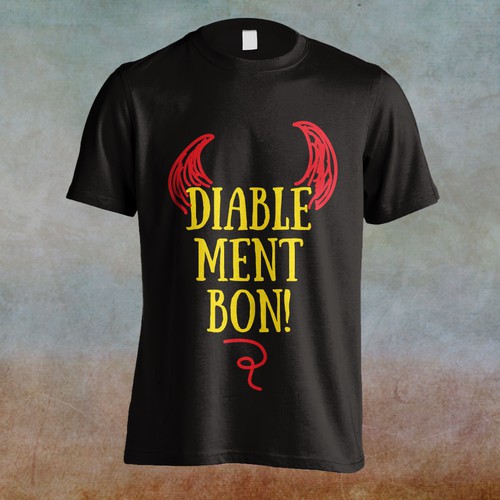 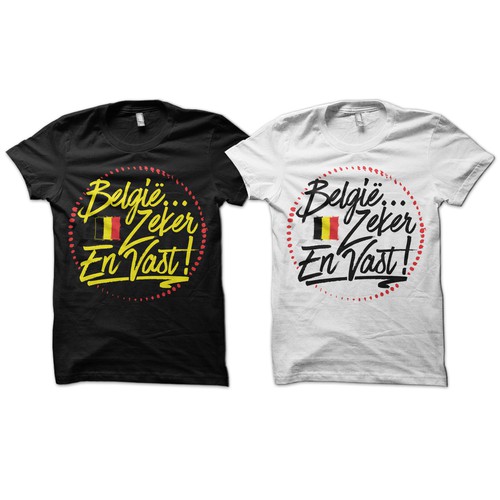 Two different T-shirt designs (slogan to be different)
The idea is to create a trendy and fashionable T-Shirt everybody wants to wear to show:
Version 1:
their pride and support for the Belgian Red Devils (national football team) !!! but without any reference to football, the European Championship or the word Red Devils as copy rights apply.
Only reference through the national colors and/or the flag (black, yellow, red) mentioning following slogan (French version: DIABLEMENT BON !) (Flemish version: VERDUIVELD GOED ! ) Roughly translated, it means "damn good! (''devilishly good!)

The slogan has to be designed in a strong , fun and catchy way !
Some of you might think about three different color versions (a Black one, a Yellow one and a Red one), but this might affects our production costs.

Version 2)
A T-shirt that shows the pride of the Belgians and the support of tourists visiting our country, after the dramatic terrorist attacks almost two months ago.
So No reference to those events or politics, but again with reference to the funny national colors (black, yellow, red) in a fresh and catchy way and with a typical saying in Belgian French ( BELGIQUE.... NON PEUT-ÊTRE !) and in Flemish BELGIË...ZEKER EN VAST ! ) (Which means "Belgium... Definitely !)

Both T-shirts designs in style (No billboards!); when you see it, you really want to wear it.
BOTH T-SHIRTS CAN HAVE SAME DESIGN BUT WE NEED DIFFERENT VERSIONS FOR SLOGAN IN FRENCH AND FLEMISH SEPARATELY, UNLESS YOU MIGHT COMBINE THE TWO LANGUAGES IN YOUR DESIGN!
Remember, Belgium is a country full of contrasts, very open minded, Burgundian lifestyle, Epicureans, fun, abondance, cosiness and in a way, surrealistic !☺
All proposals will be carefully judged this friday May 20th.

See previous information (above)
BOTH T-SHIRTS CAN HAVE SAME DESIGN BUT WE NEED DIFFERENT VERSIONS FOR SLOGAN IN FRENCH AND FLEMISH SEPARATELY, UNLESS YOU MIGHT COMBINE THE TWO LANGUAGES IN YOUR DESIGN!