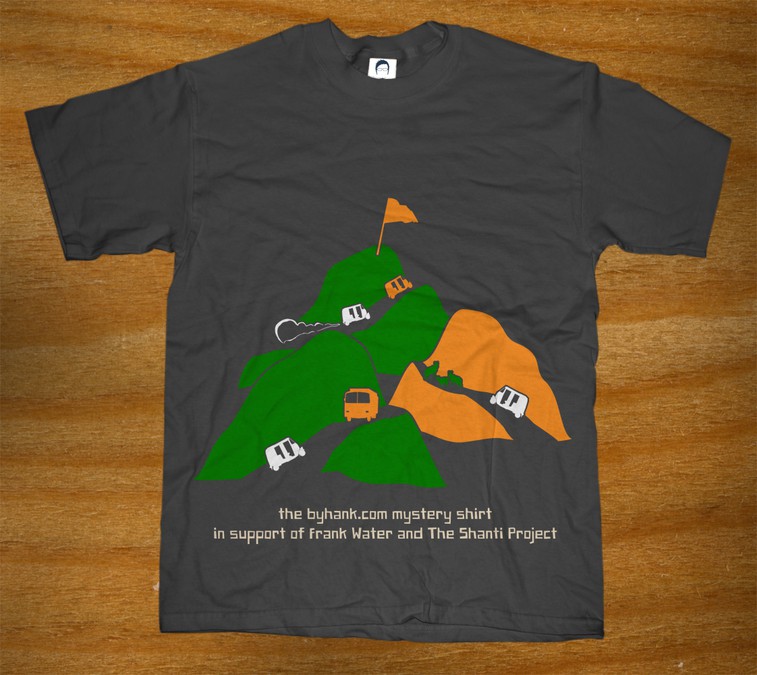 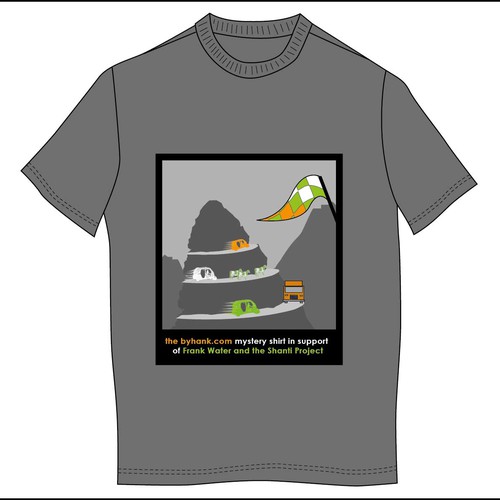 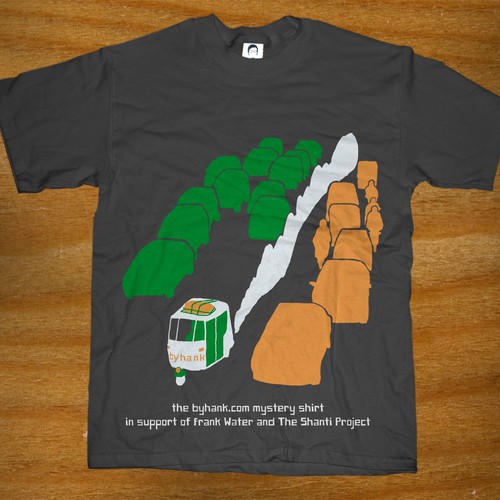 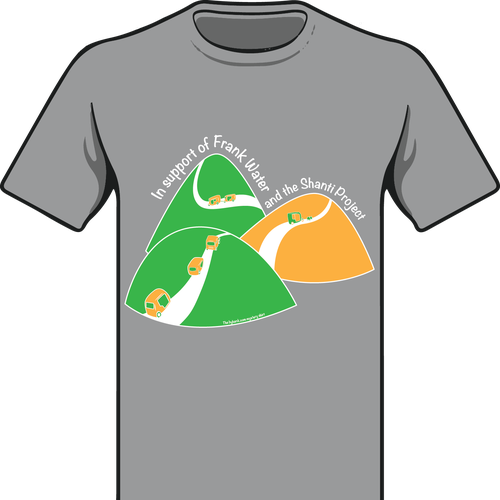 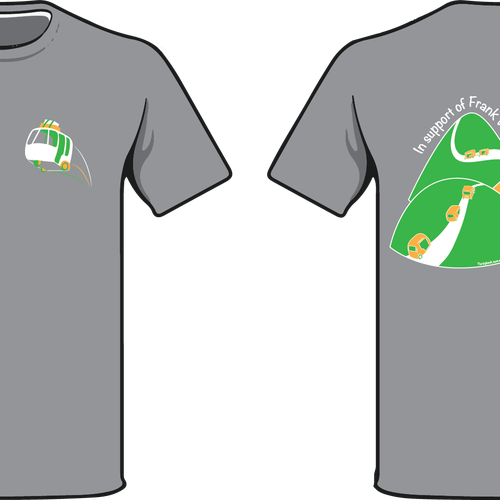 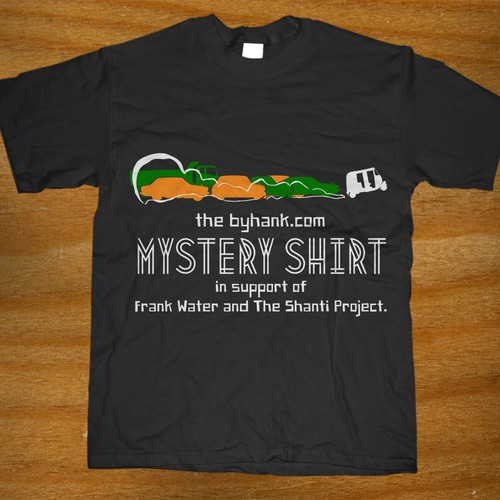 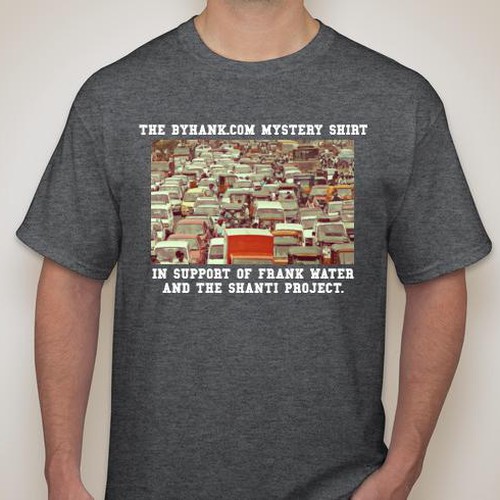 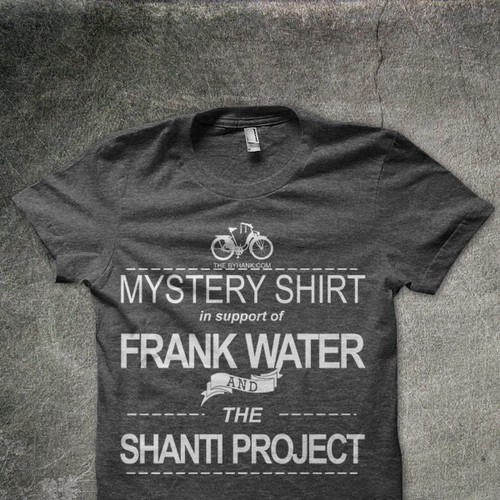 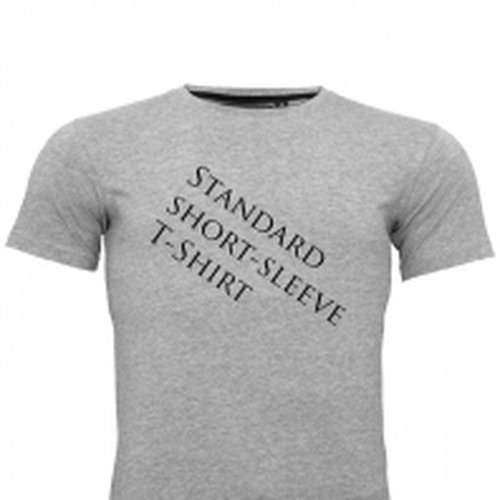 UPDATE 2:Thanks for the submisssions. We are now down to four finalists. I have learned a lot looking through the submissions I received based on the prompt I provided. There are a couple ways in which I think all of the submitted designs can be improved. 1) All items on the t-shirt should be single, solid colors. Looking through all of the designs, there are some trucks with very clear outlines for headlights, and wheel wells, etc... Simple objects should make this design a bit cleaner, which I think is important considering how much is going on and also that it is being printed on a t-shirt.I have attached one more sketch of another design idea I had yesterday that might be good going off of the mountain concept that was well-adopted. I will try to leave further feedback on each of your design to clarify my point, and please take a look at the new sketch I am attaching. I think it is pretty simple, and should be easy for each of you to come up with a strong variation of it.
UPDATE: I have received some very kind feedback that the design is to open-ended and vague. As a result we have extended the time-limit and I am trying to clarify the brief. I have attached a a drawing to this brief. Any new designs submitted should focus on the idea outlined in thatd drawing. The design I want to see should have three rickshaws driving up a mountain road that is winding around the mountain as depicted in the drawing. The bottom rickshaw should be facing a truck or bus coming down the mountainThe middle rickshaw should be facing a combination of cows or goats in the street and the top one can be just zipping up to the top of the mountain. Please try to avoid anything that looks too cartoony and remember that this will be on a dark gray shirt, and should use the colors green orange and white. thanks so much! I will try to be very attentive over and respond to any questions over the last day this brief is open.

First some backstory:
my friends and I participated in an event called the rickshaw run (probably best to visit the website at to get a better feel for the spirit of the event at http://www.theadventurists.com/the-…kshaw-run)

As part of the event we are raising money for charity. Our fundraising strategy was to design a t-shirt to sell based on our experiences. I have already sold a bunch, and now I need the design!!

I want the t shirt to use three colors: green, orange and white (it was in india after all) and the design should depict a series of rickshaws driving up a narrow, chaotic Indian road from the perspective of a large (so slightly elevated perspective) vehicle driving behind them To me it makes sense to have the rickshaws all be white and all the other objects to be either a solid green or solid orange.

Some things to keep in mind:
In subtle or tongue-in-cheek ways I would like to depict as many of the hilarious realities of driving on an indian road as possible including:

massive trucks driving at you in your lane

mobs of curious Indian people crowding around your vehicle any time you stop.

medians with cars driving in both directions on both sides

lines of motorcycles lining up along the side of your rickshaw to say hello to you when they realize you are a foreigner.

Keep in mind cars drive on the left in India.

and anything else you think might occur on Indian roads. Don't feel obligated to follow my idea here, I will gladly look at and consider anything that is interesting and well-designed, but this idea is in my head and well reflects our experience so I wanted to put it out there as a starting point.

The more of this you can incorporate into the shirt without it being too busy, the more fun it will be and the more will ultimately sell. I have attached a couple pictures if our rickshaw so you can get a feel for what they look like from different angles.

the only text that should be on the shirt should be rather discreet in either the lower left or right of the design. it should read "the byhank.com mystery shirt in support of Frank Water and the Shanti Project." the text will likely be white.

The idea I have for this t-shirt in my head is quite busy, probably too busy to look ok on a shirt, but I am confident the design idea I have is the right approach for this shirt, it is just a matter of finding the right balance.

When I actually write all of this out the whole thing sounds very cartoony and I absolutely do not want that. I want it to be a good looking, tasteful, clean interesting shirt, that if you look more closely at, can tell you a pretty interesting story. Please do less of what I asked and keep the shirt clean and beautiful before trying to cram everything in my description into a shirt that is not something people will actually want to wear.