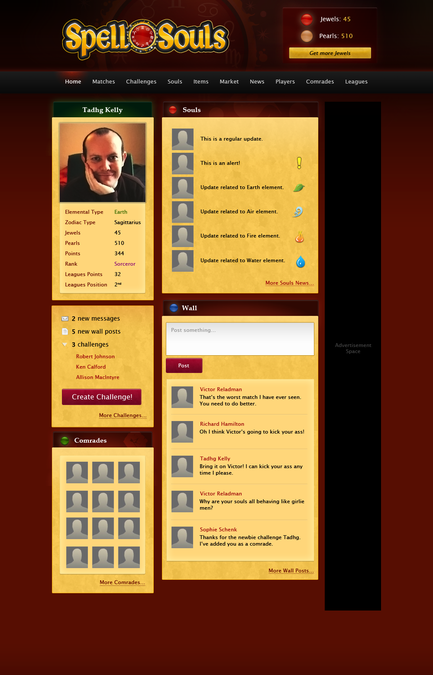 Home Page for a Web Game 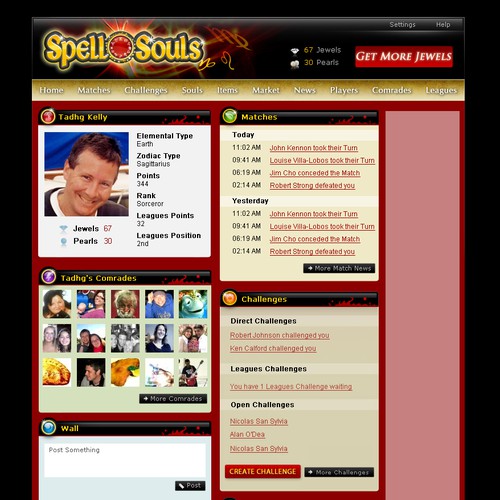 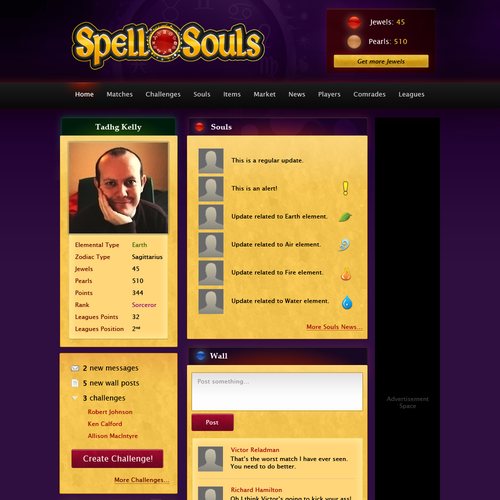 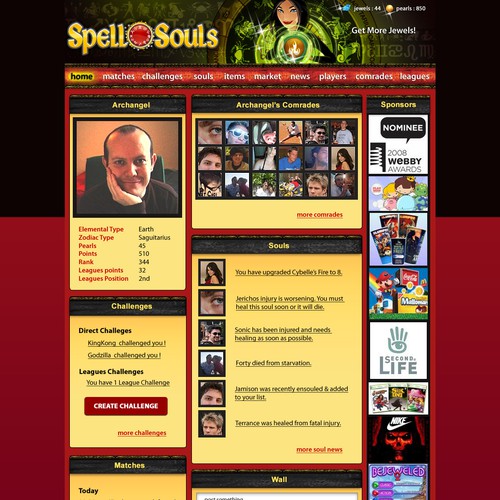 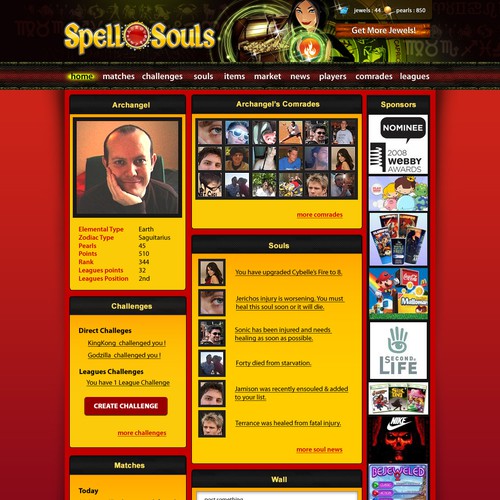 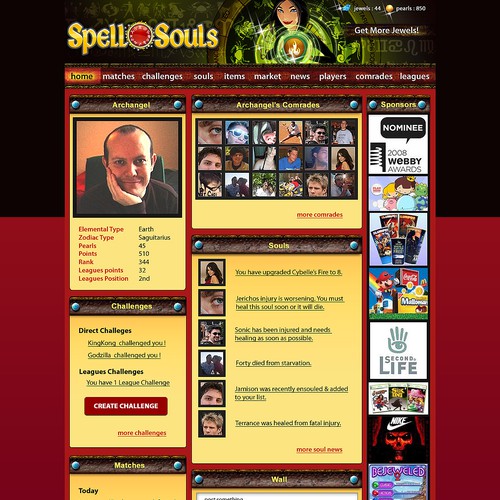 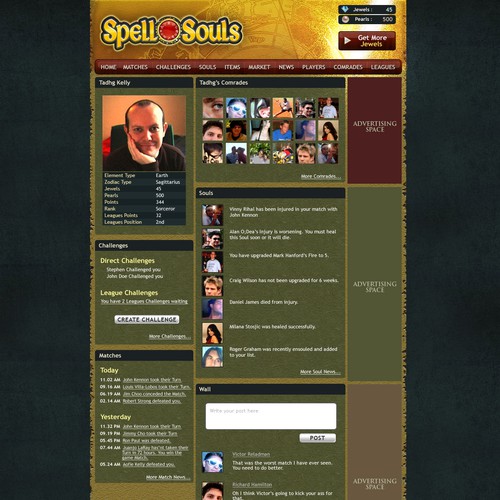 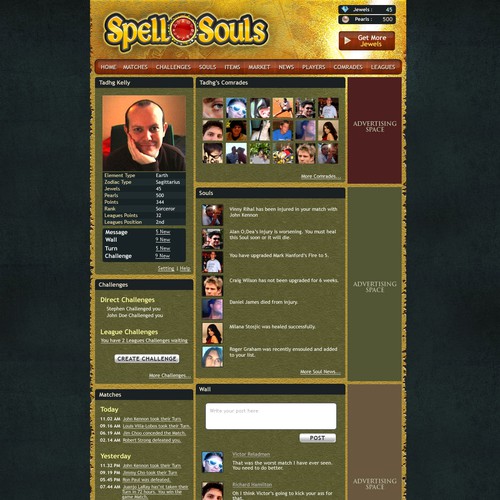 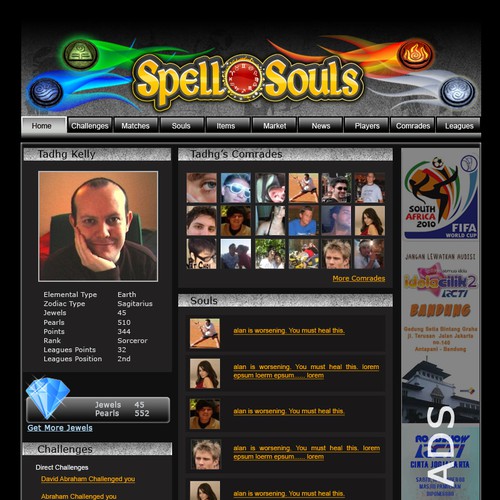 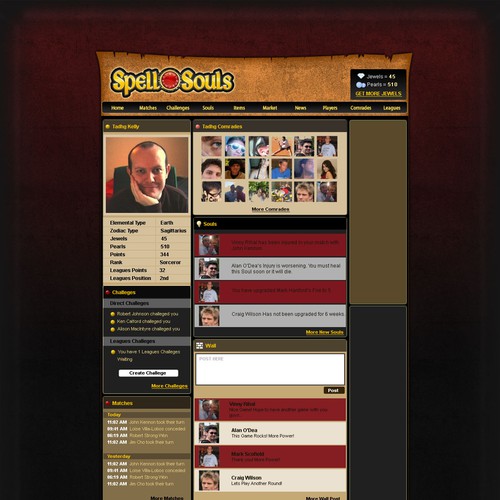 We recently ran a competition to design the logo for our web game Spell Souls, which gained 444 entries. Now we have our new competition, to design a home page for the game.

We want you to design that page. The game is a magical battle game, and so you can include the following (if you want to) as a part of the design: Orbs, Arenas, Towers, Zodiac symbols, Elemental powers (Earth, Air, Fire, Water), Magical energy (lightning, etc).

We have included many support assets to help you get started, including the winning logo, some wireframes of how the page might work etc. Good luck!

A home page design for Spell Souls,using the logo from our previous competition.

Spell Souls is a game of magical battles, set against abackdrop of a changing modern world. It is intended to be a less-than-seriousmodern fantasy game in which players will compete to be the most powerful magein the world. The game will have a visually vector-art kind of theme, a mix ofthe slightly cute and slightly scary. Players will use spells, magic items andother secrets to battle with each other, with each having a mix of comedy andhorror.

The game is essentially epic in scale but occasionallyfunny. Some spells that players can use, for example have terrible names likeCreeping Doom or The Dark Angel, whereas others are more light-hearted, like"Hanna's Herds" or "The Sylvan Pox".

The game is aimed at an adult game-playing audience that mayhave some slight familiarity with games on Facebook or the web already, and soit seeks to charm and entice them in equal measure. We have developed a functional spec for thegame and some designs internally but we are looking for some differentperspectives on how the game might look visually.

We are looking for a home page design for the game. Thedesign needs to be evocative and magical, more modern, cool and web-friendlythan a Dungeons and Dragons style. The design should work with our previouswinning logo.

Thegame is a standard html, PHP and CSS browser application. Data will be drivenby a database and will contain dynamic text and content such as profilepictures, graphics, text and metadata being pulled from a centralised databaseor the Facebook platform.

Designers should design with the idea that dynamictext may be longer or different character sets than in the wireframes providedand may eventually be in other languages.

Avoidusing too many fonts and stick to a consistent link style. Usability isimportant here. Remember that 10% of users are colour-blind. Try and stick to simple elegantclean layout and graphic design to present the information.

Make sure whatever elements you want to use are compatible across all major browsers. A lot of subtle CSS effects such as shadowing or rounded corners table are not necessarily supported by all browsers.

- Navigation bar/column
- Use of our winning logo
- A player's profile picture
- Space to show key player statistics
- A way to show the player updates and game news
- An indicator showing the player's Jewel and Pearl stats as a part pf the navigation
- A call to action for 'Get More Jewels'
- Total page width must be 760px.
- 130px of width must be reserved for sky-scraper format ads.
- The page background must be able to scale as the page height will likely be variable.
- Table backgrounds also need to be able to scale as tables will likely be variable.
- Use web safe fonts for regular text and links.
- Useful elements that you can use would be: Orbs, Arenas, Towers, Zodiac symbols, Elemental powers (Earth, Air, Fire, Water), Magical energy (lightning, etc).
- User images are always 200px wide, or 50x50 'postage stamp' size.You can find source material to work with here:

- Don’t use white as a background colour. Any other colour, light or dark, will do just fine, but not white.
- Don’t use deep blue, for the overall colour scheme.
- No dragons. No elves. No dwarves. No knights in shining armour or wizards with tall hats and long robes.

Comienza ahora
Re-design a unique online publishing website
€ 688
At Daliel, Islam as a way of life is central and is therefore the platform that guides Dutch Muslims in the application
56
entries
27
designers
High converting home page for a Digital Marketing Company
$ 599
i am a digital marketing company - my audience is small business owners in USA
105
entries
31
Designer
Redesign Mobile Website (3 page, proof of concept) for Wine Testing Laboratory
1.200 USD
**Note** This project is for the design of our mobile website only & NOT for the design of our desktop website. We p
101
entries
37
designer
DREXLS Website
1 199 $US
Drexls is a publishing company that monetized content with ads on CTV/ OTT platforms.
29
entries
11
designer graphistes
DESIGN A New Website For Award Winning IT COMPANY!
US$1.749
We are a managed IT Services Company. We provide Technology related support of all kinds to other business. We are quite
136
entries
27
diseñadores
Propane is boring but need your help
599 USD
We provide customers / residents with propane gas to heat their homes. We deliver and fill the propane gas tanks at thei
66
entries
22
designer
Más información sobre diseño de página web
Vea como funciona