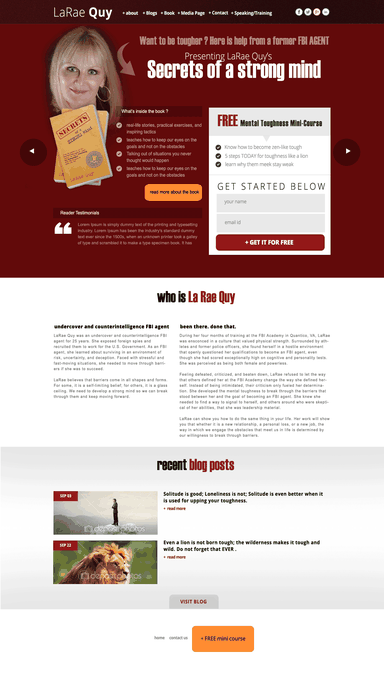 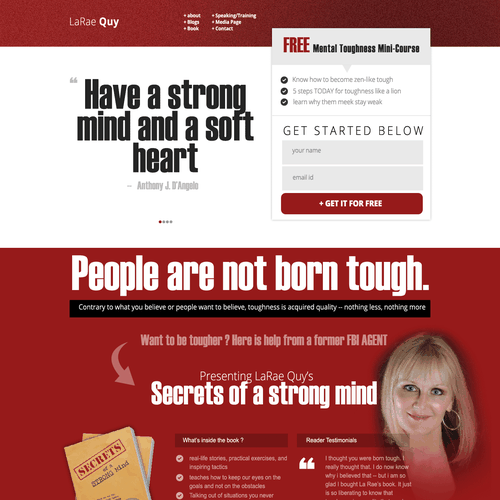 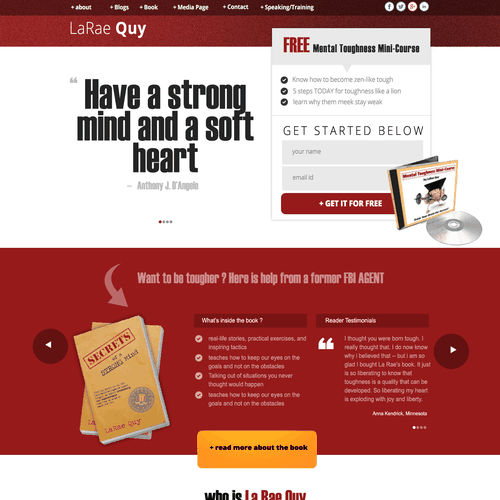 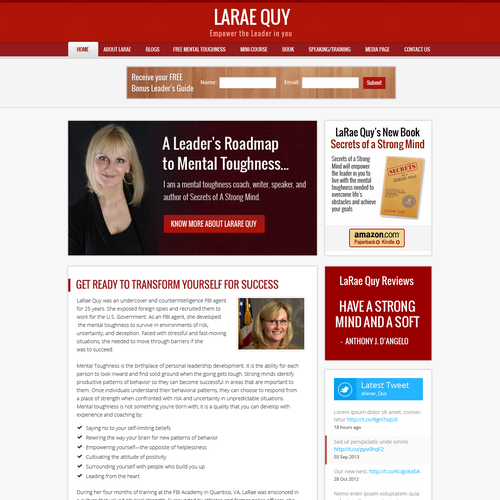 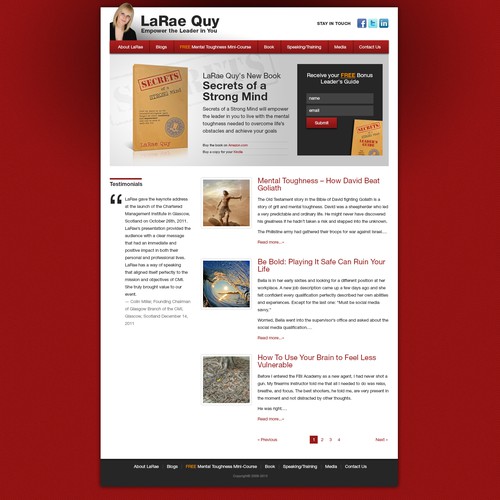 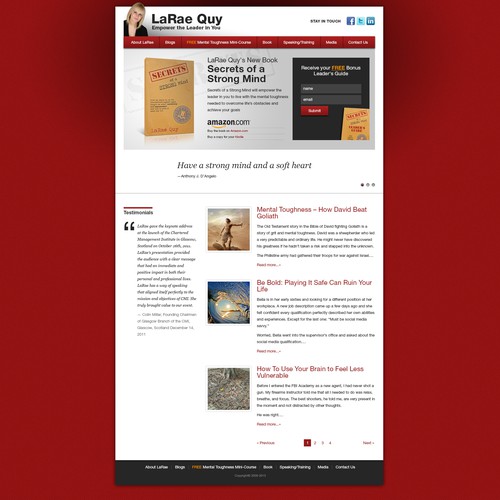 I am a mental toughness coach, writer, speaker, and author of Secrets of A Strong Mind.

I would like my blog posts to come up on the right side, with their image instead of just the name of the post.

Have a strong mind and a soft heart—Anthony J. D’Angelo

I need to highlight my FREE Mental Toughness Mini-Course somewhere in the upper right corner. Below that, promoting my book Secrets of A Strong Mind, and below that my blogs.

I want to tell visitors what mental toughness is, why they need it, and why I'm qualified to train them.

Goal: Have visitors subscribe to my Mental Toughness Mini-Course and blogs, book me as speaker/trainer, and buy my book

Content: LaRae Quy was an undercover and counterintelligence FBI agent for 25 years. She exposed foreign spies and recruited them to work for the U.S. Government. As an FBI agent, she developed the mental toughness to survive in environments of risk, uncertainty, and deception. Faced with stressful and fast-moving situations, she needed to move through barriers if she was to succeed.

Mental Toughness is the birthplace of personal leadership development. It is the ability for each person to look inward and find solid ground when the going gets tough. Strong minds identify productive patterns of behavior so they can become successful in areas that are important to them. Once individuals understand their behavioral patterns, they can choose to respond from a place of strength when confronted with risk and uncertainty in unpredictable situations.

Mental toughness is not something you’re born with; it is a quality that you can develop with experience and coaching by:

During her four months of training at the FBI Academy in Quantico, VA, LaRae was ensconced in a culture that valued physical strength. Surrounded by athletes and former police officers, she found herself in a hostile environment that openly questioned her qualifications to become an FBI agent, even though she had scored exceptionally high on cognitive and personality tests. She was perceived as being both female and powerless.

Feeling defeated, criticized, and beaten down, LaRae refused to let the way that others defined her at the FBI Academy change the way she defined herself. Instead of being intimidated, their criticism only fueled her determination. She developed the mental toughness to break through the barriers that stood between her and the goal of becoming an FBI agent. She knew she needed to find a way to signal to herself, and others around who were skeptical of her abilities, that she was leadership material.

LaRae can show you how to do the same thing in your life. Her work will show you that whether it is a new relationship, a personal loss, or a new job, the way in which we engage the obstacles that meet us in life is determined by your mental toughness.

No cartoons or anything that looks too high tech. I want a look that is sophisticated and will appeal to either male or female.

Global investment firm seeking website redesign and ongoing PowerPoint design work
1 599 $US
The Riverside Company is a global investment firm. The target audience for the website is 1) owners of businesses that m
182
entries
29
designer graphistes
Marketing Website for top level fin-tech speaker
US$ 2.499
I am the founder of annuitycheck.com and seminarlabs.com. I sell our marketing and software solutions by doing MasterCla
112
entries
24
designers
83 redesign
US$2.199
PLEASE READ THIS SECTION BELOW. TOO MANY SUBMISSIONS NOT ALIGNING WITH REQUIREMENTS. DO NOT START PROJECT OR MAKE A SUBM
156
entries
45
diseñadores
Website Update for Sustainable Projects Development Company
US$ 1.349
ThinkBox develops sustainable projects that fix critical aging equipment in buildings, generate renewable power, upgrade
144
entries
34
diseñadores
Amazing Membership Site Design For Popular Youtube Channel
US$ 2.199
Income School is a popular Youtube channel and website where we teach people how we create passive income websites.
150
entries
24
designers
New homepage design marketing agency
A$799
We sell marketing services within Australia focused on Digital marketing and telemarketing.
51
entries
21
デザイナー数

Comienza ahora
Design for new business development tool
￥236,619
Please refer to the attached requirement file
9
entries
5
デザイナー数
Website to help corporate innovation consultants
CA$ 1.500
We are an innovation consultancy that is focused on helping enterprises $500M+ a year in revenue that have innovation te
5
entries
3
designers
Seal the Deal! Winning Proposal Templates
$199
We help leaders maximize efficiency and create more sustainable work cultures and businesses by turning people process a
4
entries
2
diseñadores
Need Help with My Company Logo
$299
Target audience are CEO's and IT professionals. Information security. Executives that work in stock trading business.
122
entries
31
デザイナー数
Designing a simple logo for a women who work in research/tech to making the work a more just place
US$ 299
I am currently operating off my name. I am a researcher and consultant who is known for understanding low to middle in
358
entries
86
diseñadores
Diversity and Inclusion consultant to big business needing new logo
399 £
Consultancy support for leaders who want to make their businesses more diverse and inclusive - particularly when they ar
38
entries
14
designer
Más información sobre diseño de página web
Vea como funciona