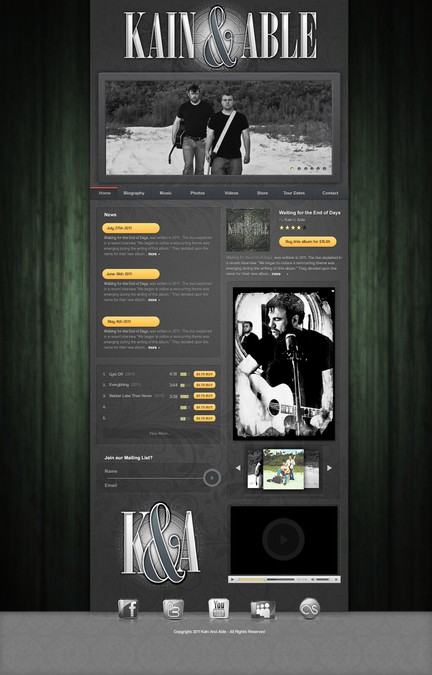 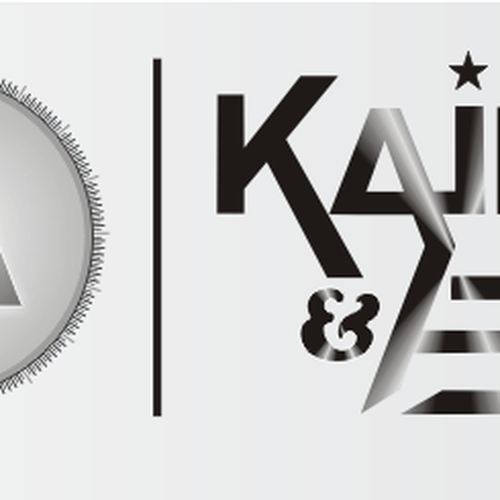 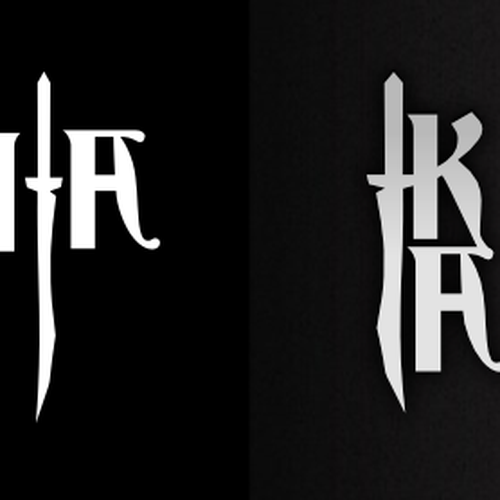 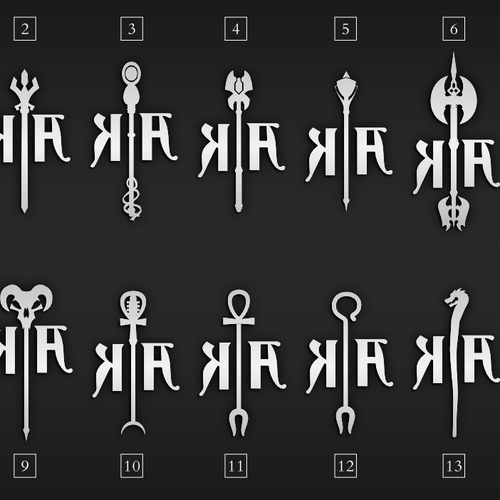 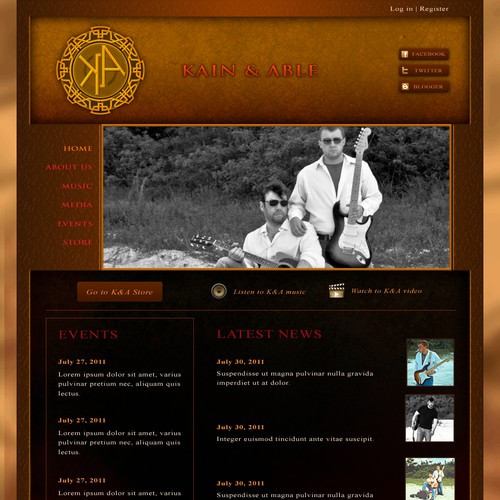 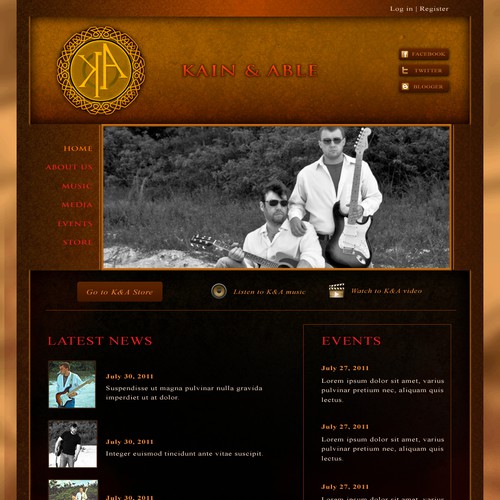 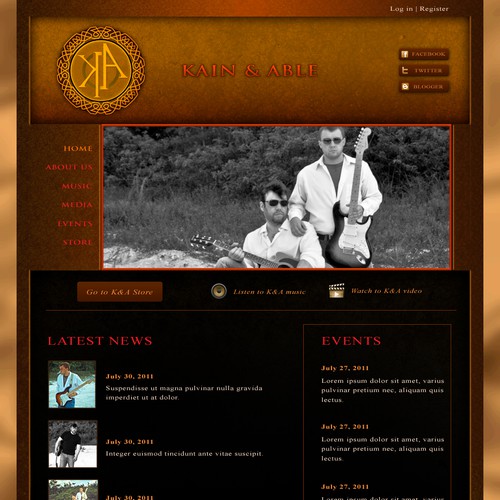 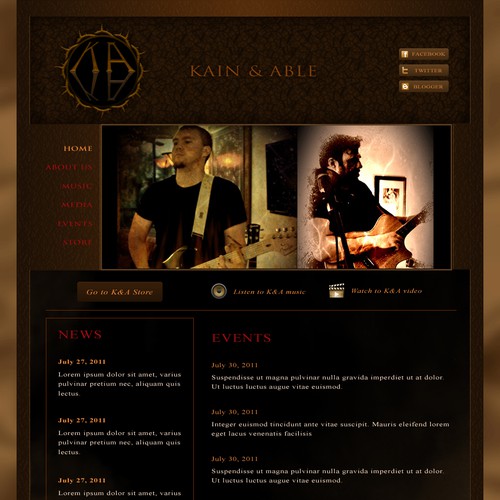 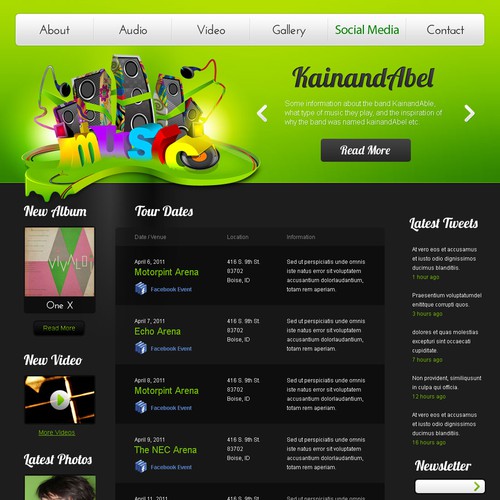 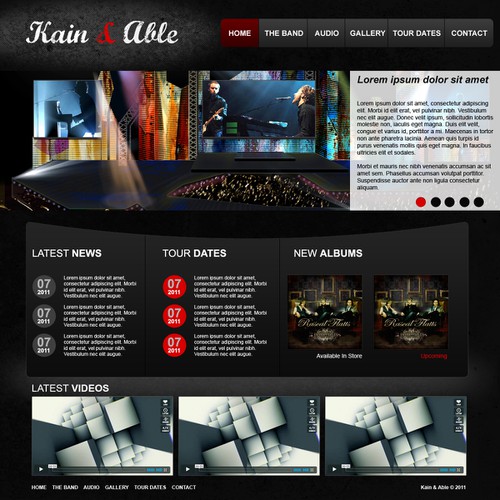 http://www.jthomasedward.com is the SOLO webdomain for the lead singer of Kain & Able. take a look at the logo / symbol as attachment at the bottom of the page. the singer came up with that design that he has used for his solo work. It's an infinity circle surronding the JTE ( the letters of his name) there is a snake taking a bite out of an apple that is being handed to it, ( the hand forms from the top of the E. The artist is obviously playing with religious imiagary . I've included that as an example of what at least one of the members of Kain & Able has used. There are samples of the artists previous work on
http://www.jthomasedward.com

FIRST LISTEN TO THE 3 DEMOS FROM THIS GROUP.THESE ARE ROUGH DEMOS WITH GUITAR / VOCAL ONLY, LYRIC SHEETS ATTACHED at the bottom of this page , along with a logo that was previously concieved by and still used by the the lead singer of Kain & Able ( J Thomas Edward)
w ww.kainandable.com/designmusic.php is a link to demos

We need a logo & site design for a new rock band named Kain & Able. The website domain is http://www.kainandable.com . The music is all original compositions written by one or both of the two founding members of Kain & Able. The act is a duo, however we will eventually have a full back up band.

The genre of the music is a little tough to categorize. It is rock, blues, & R&B based with overtones of jazz, country; funk, depending on the song. The lyrical content is a central part of this music. As the songs were developed a theme started to emerge where references to “end of days”, “end times”, are throughout many of the songs. The band is NOT a Christian Band. the lyrical content, while there are many references to spiritual things; the references are more of an observation by the writer. There is no preaching, and a person could easily listen to the songs and totally miss any reference to end of days, god, or spirituality. These things are pretty subtle. The name Kain & Able was chosen after 6 months of the duo working together. It’s also a phrase used in one of the songs. Here is a link to a couple of rough-cut demos of the group in order to get a feel for the music.
I strongly sugest listening carefully to the two songs on the link below. I do not expect anyone will be able to come up with a desgign that fits this muscial act without being familar with the music. Put on your best headphones and listen.
http://www.kainandable.com/designmusic.php
DO NOT USE ANYPART OF THE PLACEHOLDER DESGIN IN YOUR DESIGN, WHATS ON THE KAINANDABLE SITE NOW IS GRAFIC FROM ONE OF THE MEMBERS OF KAIN AND ABLE'S SOLO WEBSITE

The logo should probably focus on the K&A , using symbols, variors types of imagery in the logo should be consider. The K&A logo should convey the energy and attitude of the artists. ( Again listen to the songs, read the lyric sheets) & feel free to ask questions.
The website will need categories for music, video, social media, photos, store. As far as the look and feel, we don’t have a lot of input on that. We would rather see some fresh ideas. We want a very recognizable logo, (Rolling Stones Tongue is an example of awesome logo for a rock band) Logo should be easily recognizable. The logo should have a “timeless” quality about it. The logo will be used on the site, cards, posters, t-shirts etc.

The website should also have a modern yet timeless look and feel. Of course thats a tough one, but someone out there has the talent & the vison.

here is a private youtube link video of one of the songs written for debuet album
http://youtu.be/yjmZfBSrTW4

Listen to the two demos that are linked here. They are rough cuts with guitar & vocals only, however you can still get a pretty good idea of where the guys are coming from. Read the two lyric sheets posted. While it's certainly possible that a designer is able to come up with a logo / webdesign thats representitive of this new band, without having heard them, / being familar with the style, the attitute & the content of the music, it's pretty unlikey. Strongly advised to listen to demos sevela times, read lyric sheets

The current design is from another site and does not represent http://www.KainandAble.com. It's just a placeholder.

Redesign of Flyvaluejet.com website
US$1.749
Airline, we sell flight tickets, Internet Booking Engine
123
entries
31
diseñadores
Shopify Website design ABOUT and WHY pages not the actual home page
AUD 1,004
This is a high end skincare ecommerce website
27
entries
6
diseñadores
Re-design the website of a TOP French Ski Resort
2 055 €
We are looking for talented artists to re-design the new website of a TOP French Ski Resort. Designers can find a sourc
79
entries
16
designer graphistes
WizzAccounting Website Redesign
£ 828
Accountancy services for small businesses in the UK.
72
entries
33
Designer
Strong design needed to fill up the widening gap in dentistry
2 055 €
The site will be for our organization. More specifically a holding company which acquirers subsidiaries (dental clinics,
161
entries
26
designers
Design a Portfolio Site for Homebuilders and Remodelers that is 10x better than Houzz
US$ 749
BuildBook is a collaboration platform for the residential construction industry. Home Builders and Remodelers - and thei
64
entries
8
designers

Comienza ahora
Shamanic Search for the First Stone
958 €
Shamanic Work Feeling and spirituality. This website will deliver philosophical text and pictures. As a shamanic practi
24
entries
8
diseñadores
Landing page for new and smart exercise bike
NOK 7’899
High Intensity Interval Training (HIIT) is deemed the most efficient type of exercise when it comes to health. However,
79
entries
36
Designer
A New Privacy-focused Credit Card, Backed By Cryptocurrency | Pockets.io
599 $US
We are a virtual credit card provider. We are a service that allows users to generate a disposable credit card, and fund
24
entries
13
designer graphistes
Help us making the world a better place with a great website
CHF 619
We offer unbiased research on triple bottom line investments. These are investments which have a social, environment, an
120
entries
23
diseñadores
Powerful web design for restaurant
US$ 599
Eva Costilla is a restaurant specialized in ribs. It means Eve Ribs, Adam's widow (yes, this is a plot twist from the bi
61
entries
21
diseñadores
Design my Production Company Website
899 $
Made By Ayman is a IOS production company that will be producing IOS apps. Made By Ayman will be the logo/splash screen
54
entries
19
Designer
Más información sobre diseño de página web
Vea como funciona